Get ready to Swap Blocks. A game that does exactly what it says on the tin.

As soon as I saw the trailer for Swap Blocks my interest was piqued. I’ve always been a fan of what I call pure block logic puzzlers based on the tetris playfield style. The basic principle behind all these games is to clear the board or reach a score / block / colour target.

Many many games have been created using this basic formula but adding their own little spin on the core design. Most have been released on Nintendo handhelds over the years. This is to be expected, given that the puzzle format is a perfect fit for pick and play gaming. Easy to understand but hard to master, low tech requirements and popular with all ages. The term “casual gaming” could be lazy an overarching tag for the puzzle genre in general. 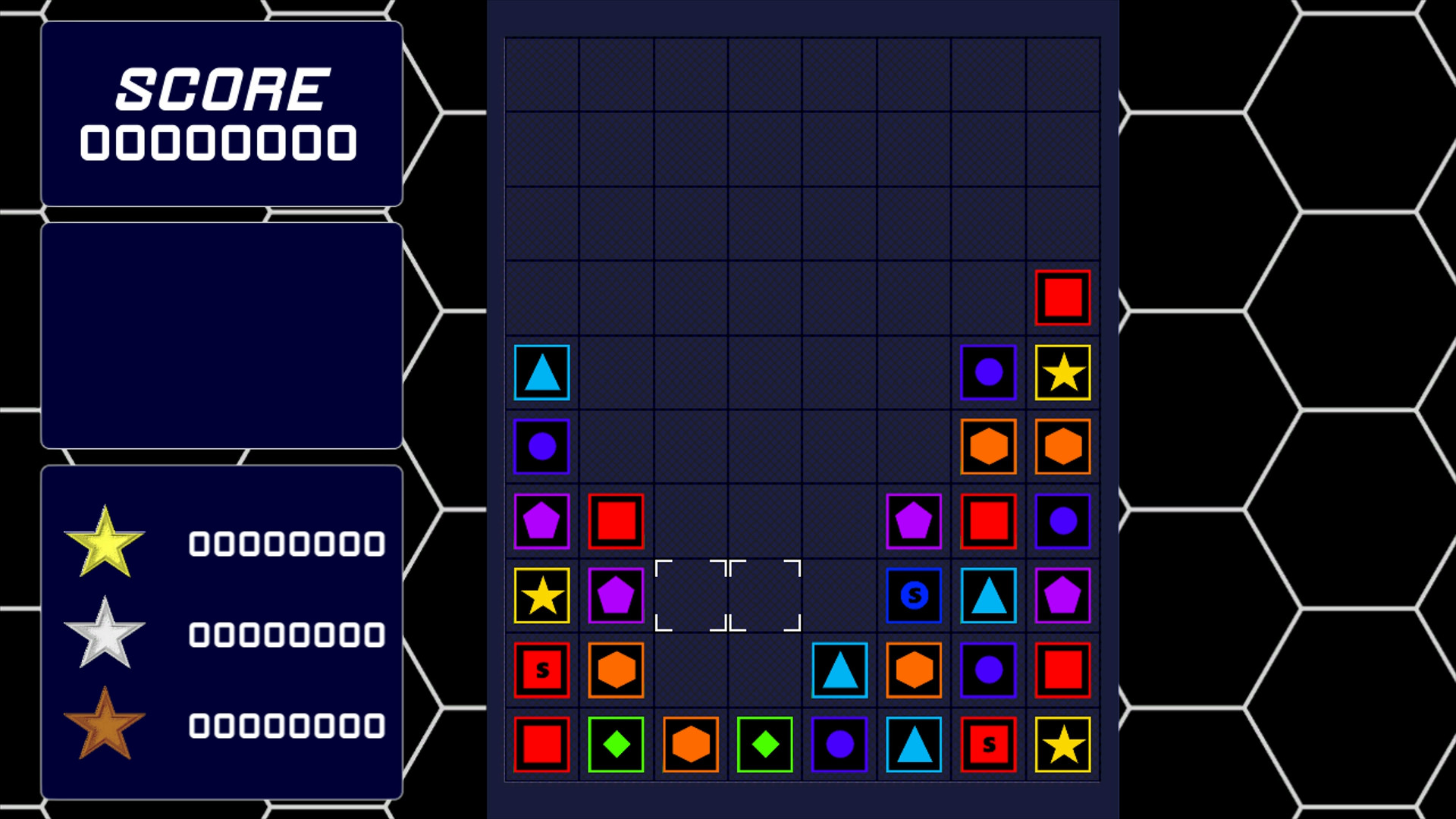 Let’s start with a bit of investigative journalism. Every game I review is not from isolation. I like to get a bit of background on the title. What platform has it been released on? What previous titles has the developer created and what is their track record regarding updates and general customer support?

Swap Blocks has previously been released on the Nintendo Wii U via the e-shop. This was back in June. It’s a curious choice of the platform, given the timeline. Why released a casual title on a system, reaching the end of its cycle as a digital release, with little to no audience and zero PR? The term “sent to die” seems kind of appropriate. Perhaps the developer thought it might gain more traction in a limited market rather than drown in a sea of casual titles in the Apple app store or Google Play. Either way, judging by the one solitary review on the web, the game failed to be greeted with any kind of fan fare or reaction. Hence the Steam release, which gauging by the official discussion forum has met with the same kind of indifference. 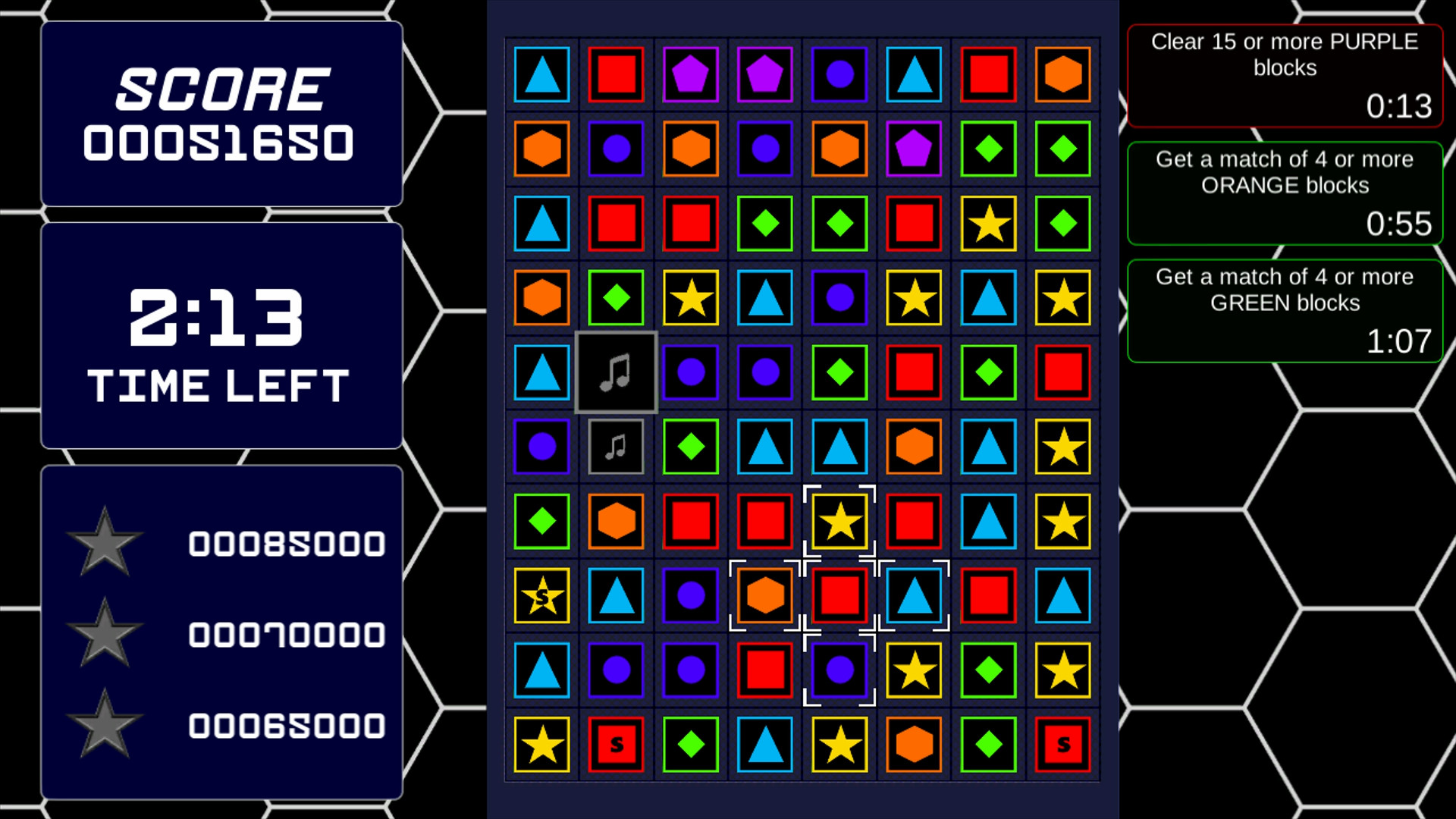 Enough of the preamble. What’s the game play like, I hear you ask? Well, If you have previously played any kind of match three game you’ll know the basics. Having said that, Any fans of Panel de Pon, Tetris attack or Planet Puzzle league will immediately feel at home.

Square blocks of various colours/patterns are stacked in a 2D well, 8 blocks wide and 10 deep. The player controls a two block cursor which can “swap the blocks” only in the horizon plane. You can move the cursor any direction on the playfield in order to match blocks. Bonuses are awarded for matching 4,5 blocks. Matching 4 makes a star block appear, which when activated blows up a section of blocks in a diamond shape. Matching 5, makes a strobing colour block appear, you can activate this one by pushing against a designated colour, causing all of those coloured blocks to be removed from the playfield, causing a cascade effect and leading to a host of combo opportunities if properly managed. This is the core concept of the game and is deeply rewarding, once mastered. 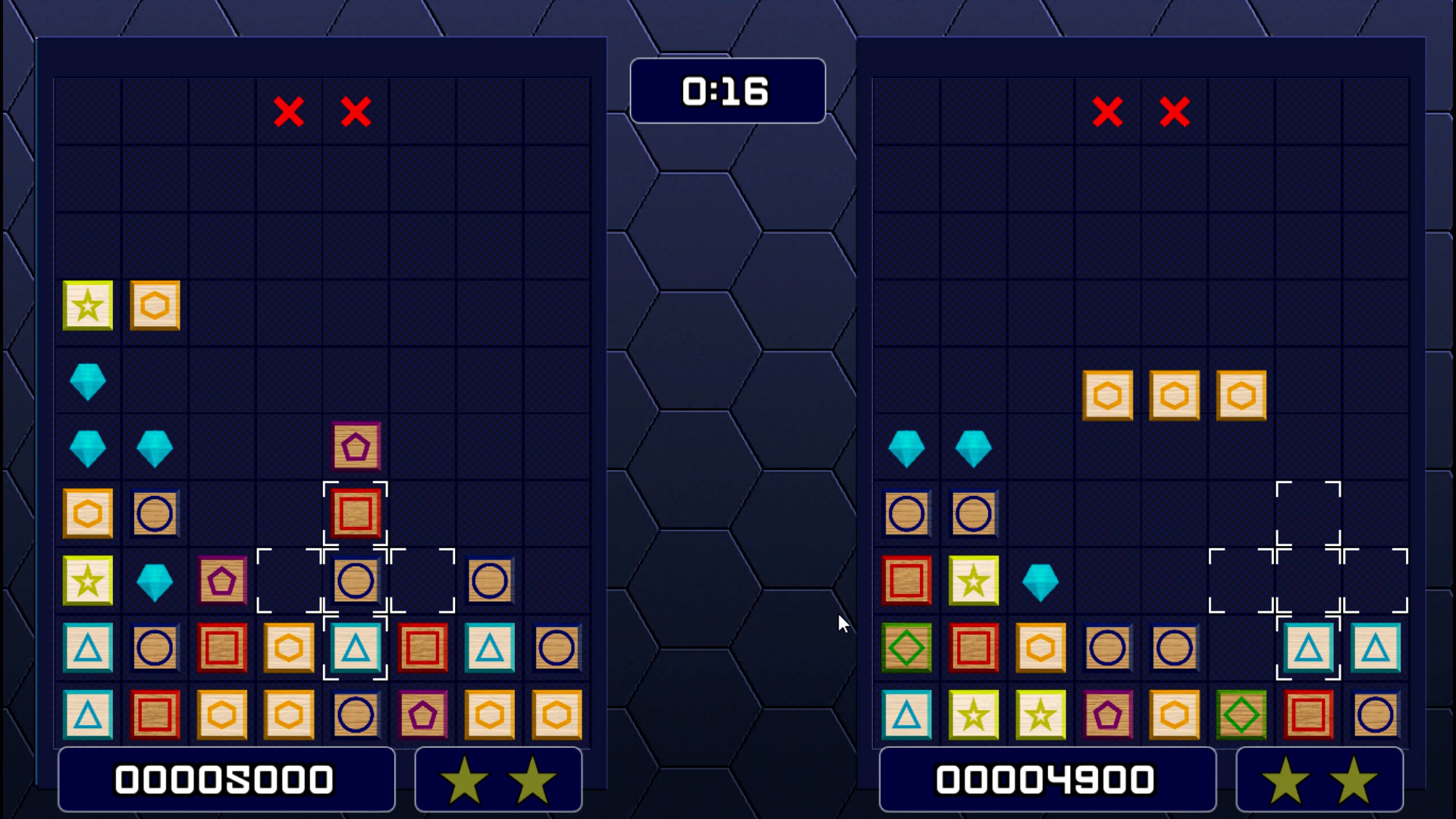 My go to mode during my playtesting was marathon. This invoked the classic Tetris “mind state”, where you feel all your auxiliary mental processes have been put on hold and logic gate synapses come to the fore. The combination of great gameplay, apt tune and the appropriate block skin (oil painting) took me back the golden Nintendo DS period of block puzzlers. I lost 2 hours playing this mode in one single session.

Normal: Limited amount of moves to get a high score.
Timed: Set amount of time to get a high score.
Marathon: Play till you loose!
Normal+: Match 3 or more of the designated colour in a limited amount of moves.
Vs: play against player/CPU in race, timed and battle modes.
Marathon: Tetris attack mode in all but name.
Challenges: various game mode challenges to test your skills.
Custom levels: play the levels you have created.

Graphically Swap Blocks is very much a mixed bag. The game playfield is clean and unobtrusive.The option of different block skins gives the user a selection graphical styles to suit their personal preference. For me, simple clean designs win every time and I’m happy that this was offered without any mandatory score unlock system. The UI presentation reeks of basic unity assets. No attempt has been made to any kind aesthetic design. There’s functional and then there’s bland, ugly and uninspired. I’m sorry but the game falls into the later camp. Looking at the Wii U version there has been no tweaking or finessing of the interface, during the port to the Steam platform. The whole interface seems overly large and hobbyist. This is a shame and a missed opportunity. A casual buyer may be put off by the screenshots that have been posted on the store page.

Game audio and soundtrack are a tad pedestrian. The main theme of the game has a very lo fi fruity loops kind of feel. The time mode tune is god awful and immediately had me reaching for the mute button. It’s not the composition itself, it’s just the choice of top line instrument and the muffled drum loop. Admittedly I’m an avid game soundtrack fan.My taste might not reflect the general populous. I always look to Intelligent Systems and their masterful use of soundtracks, which help to induce that zen state when playing puzzlers.

There’s not a great deal of fan fare with the sound spot FX too. Audio queues for reaching a certain star level or besting your high score are absent. These are little details that add to the endorphin rush, that a player should feel playing the game. 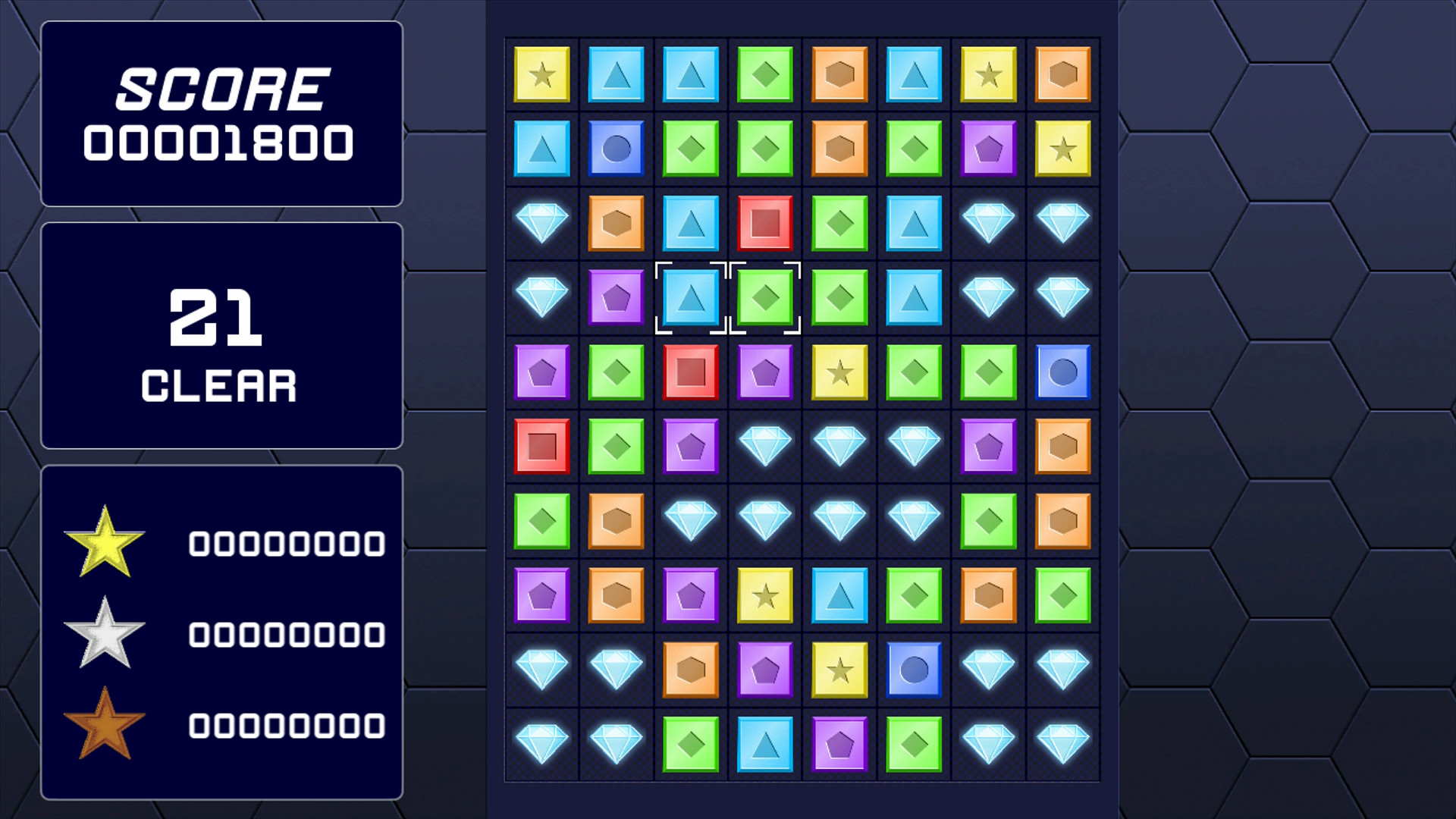 During the review process, I contacted the developer regarding a couple of gameplay queries and UI design additions. The response was prompt, verbose and informative. This was also followed up by a build update with my UI proposal implemented. Kudos to the dev for taking on board constructive criticism and acting on it.

Overall the Swap Blocks is workmanlike. It’s a solid puzzler let down by the presentation and UI design. With a few updates, it could be so much more. I’m not asking for Nintendo polish, that would be an unreasonable demand, given that this is very much an indie effort. The core gameplay is very addictive and there is more than enough modes, challenges and user created content features for the asking price. If you are looking for a Panel de Pon style game on Steam, then I’d heartily recommend Swap Blocks.