Galaxy of Pen & Paper is the latest “meta-RPG” from Behold Studios, taking the series into the future!

Galaxy of Pen & Paper is the third game in the tongue-in-cheek ‘meta’ role-playing game from Behold Studios. While the first two games’ in-game worlds had fantasy themes, this one has a science-fiction setting.

In Galaxy of Pen & Paper you control the characters played by a group of role players playing a science-fiction tabletop role-playing game. The game-in-the-game begins with your characters essentially slaves to the local used-ship salesman on the desert planet Tanton, in the Leguin System, and from there the pop-culture references just keep on coming.

With the help of some Non-Player Characters (NPCs), as well as your combat ability and a big wad of luck, you soon find yourself in possession of a space ship and your freedom to explore the galaxy.

The game maintains the same style of pixel graphics as the previous games in the series, with the same fantastic attention to detail.

The game is split into two worlds: the game’s game world, with a planet-hopping science-fiction setting, and the game’s ‘real world’, set in the Game Master’s (GM’s) bedroom. The ‘game world’ includes a number of solar systems, planets, space stations, asteroids, and space ships. Many of the scene graphics are relatively simple, but as with all good pen-and-paper roleplaying games, the characters bring them to life. The ‘real world’ room is complete with great posters, easily recognisable models, a big old CRT television set, and even occasional visits from the GM’s mother, popping her head through the door. 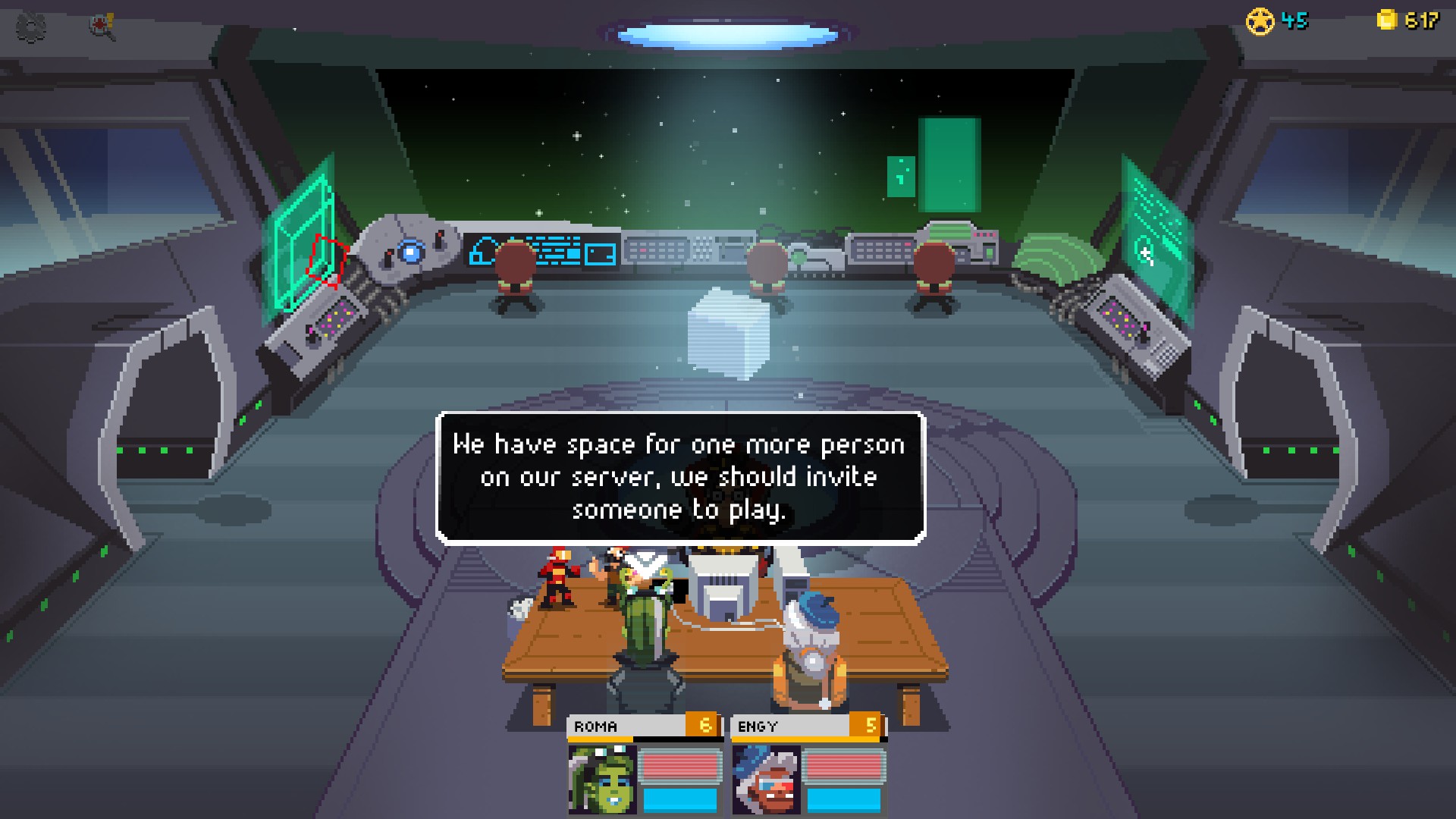 As with previous games, you can upgrade your game room for in-game bonuses, most of which made me giggle about fondly remembered gaming sessions of my own. Some of these carry through to the desk about which the holographic player characters all sit. It’s very similar to the previous games, but it’s still very clever, and amazingly well done.

I find the interface a little more confusing than the original Knights of Pen & Paper, but I’m not really sure why. The same basic components are available, but I often get lost and have to read the tooltips. It just doesn’t seem quite as obvious as in Knights.

Graphics options are limited to resolution and full screen / windowed modes, but unlike many pixel-graphic games, this one still looks nice at 1920×1080.

The music in Galaxy of Pen & Paper has a definite 1980s vibe, with boppy synthesisers, simple drum machine beats, and fast electric guitar solos. Given the meta-game, this music fits very well; better than you might at first think for a science-fiction-themed role-playing game.

Sound effects are mostly fairly rudimentary, but they’re appropriate for the game. They’re well normalised in terms of volume, except for the medbay healing sound being WAY too loud. 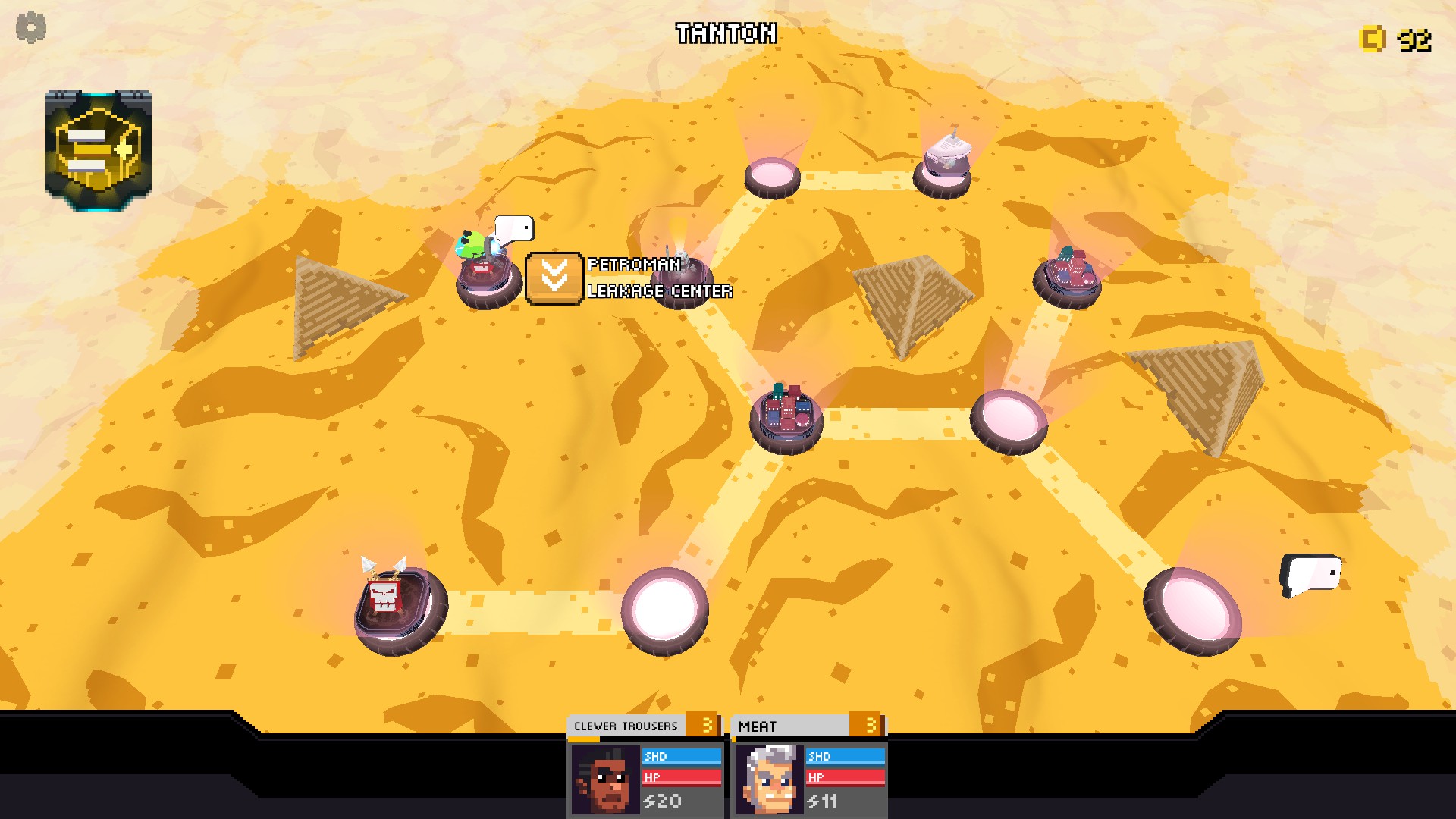 The game plays very similarly to the Knights of Pen & Paper games, with the GM and players seated at their gaming table positioned front and centre of every scene, and the GM explaining any important happenings to the players, while the game proper is played out in pixel graphics around them.

You begin the game by creating your GM and your first two characters. Each character is made up of a combination of race (Simian, Human, or Green), roleplaying archetype, and class. All three together combine to affect the four basic characteristic values, with the race and archetype determining a special ability each, and class determining skills. Each group can have only one of each archetype and class. This is all very similar to Knights of Pen & Paper 2. 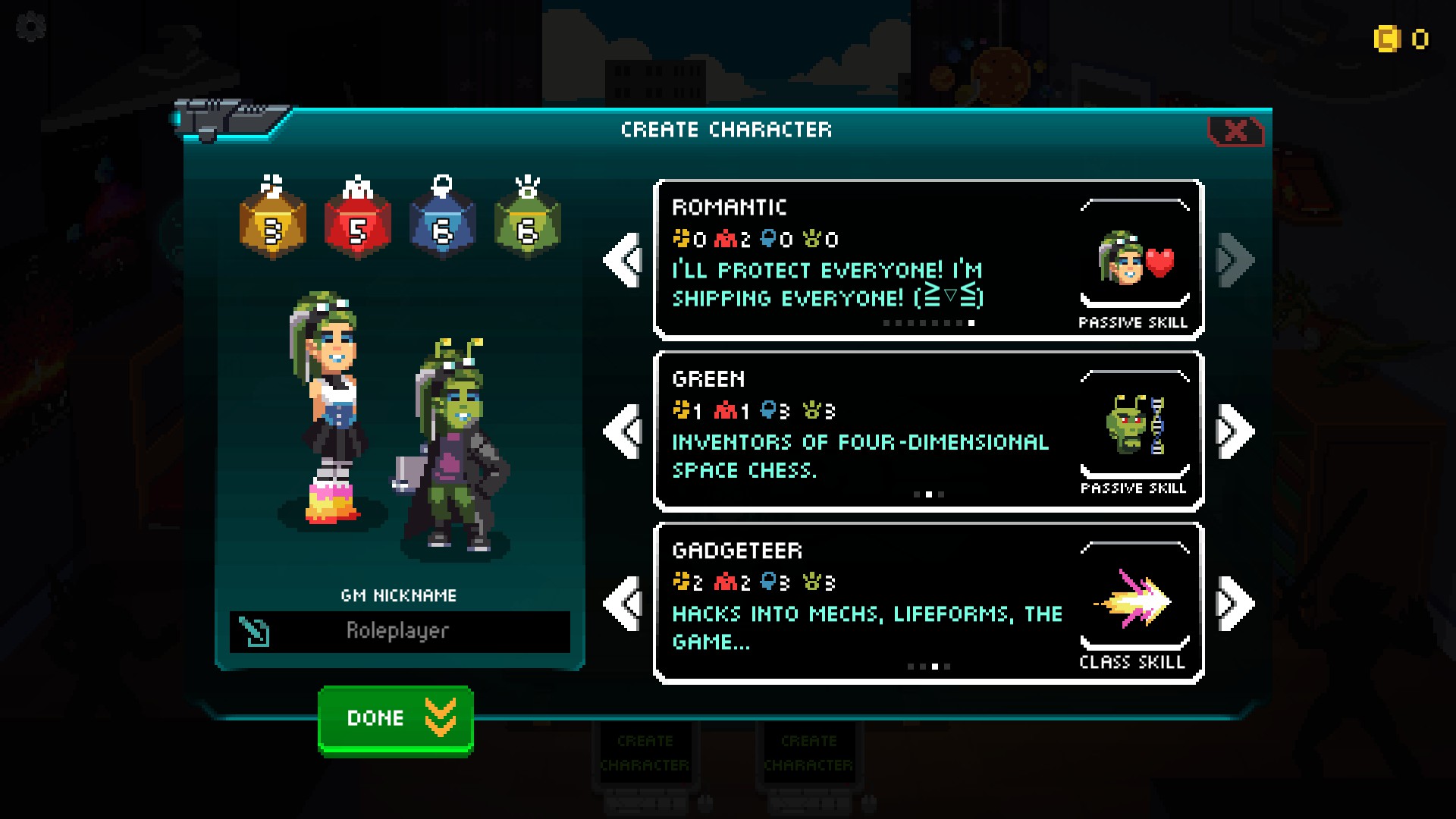 Each scene has a number of standard options available, such as talking to NPCs, creating a combat encounter with one or two of the scene-specific enemies available, or exiting to the planetary or system map. You can examine character sheets, use equipment, or reassign skills to slots at any time.

At almost any time you can also create a campaign/story quest to progress the plot, or a procedurally generated side quest of one of the unlockable types, to give your characters a chance to earn more experience points. The story quests rapidly become quite difficult quickly, so it’s often worthwhile taking a side quest or two to keep up with the curve.

Character-based combat itself is turn-based and will be familiar to players of the previous games, or pretty much any turn-based JRPG. Combatants move based on their initiative, and each gets one action per turn: usually activating a skill or attacking an enemy. Most combatants have shields which soak some damage, and partially regenerate each turn. Most active skills cost skill points (SP). Both health and SP are only healed with items, level-ups, or medbay visits. If you die you respawn at the closest medbay, but you lose both experience and credits, which is a bit rough.

The game also includes ship-based combat, which is very simple. Each turn each ship roles a DICE to determine how many action points are added to its pool. You then spend these points on attack roles, healing roles, or other abilities, trying to wear down your opponent’s hit points before you lose yours. 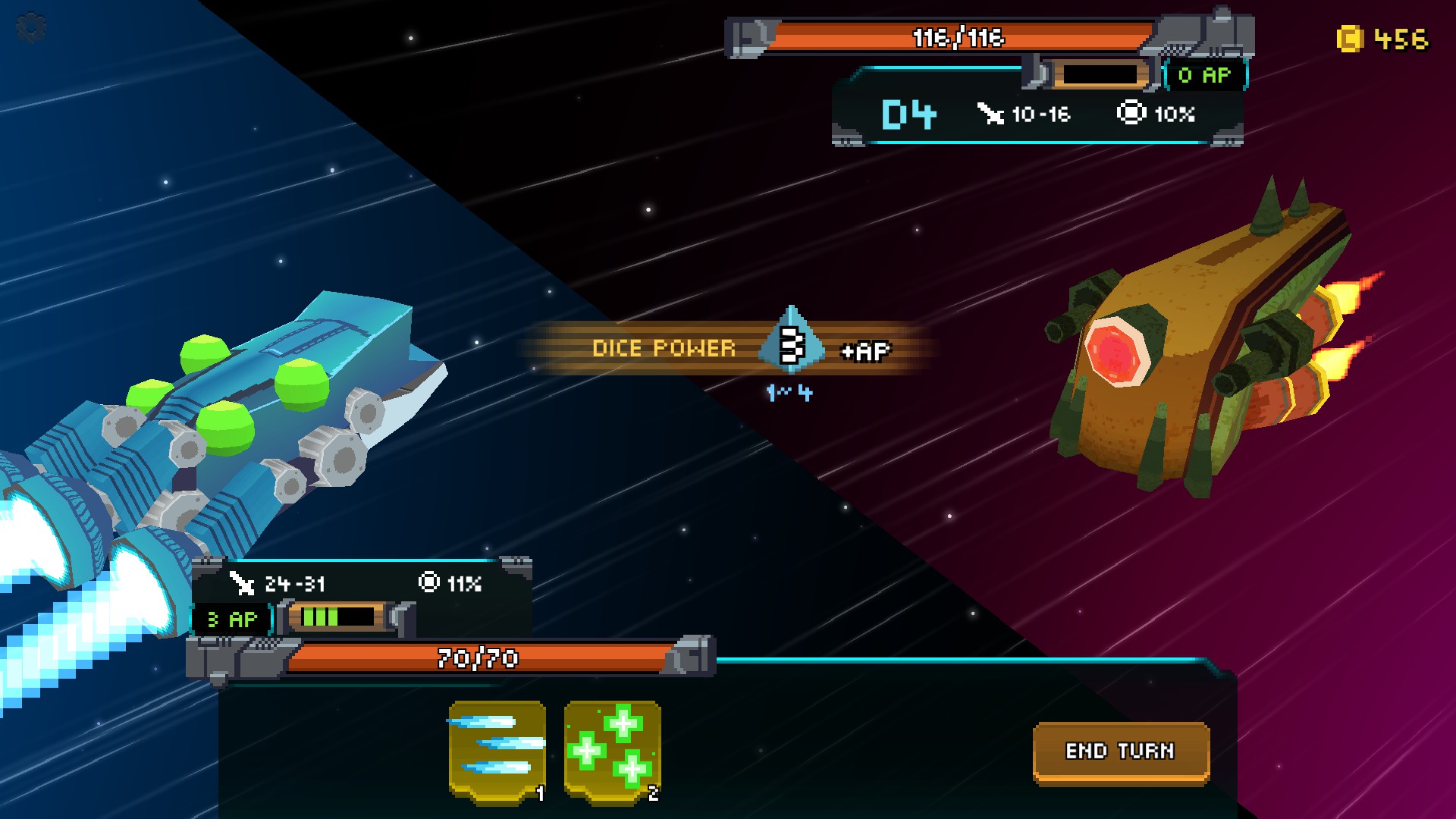 And that’s basically it. You travel around, exploring each small location, grinding enemy combat and side quests to build up power until you think you can handle the next story quest. At certain points in the game the GM can buy extra game modules, expanding the game, or add a new character to your group.

Character progression is a bit limited, with only four skill slots available per character, shared between active and passive skills. My characters had four skills I wanted very early on, making the remaining skill points useless. More customisation options for each level gain would be very welcome. 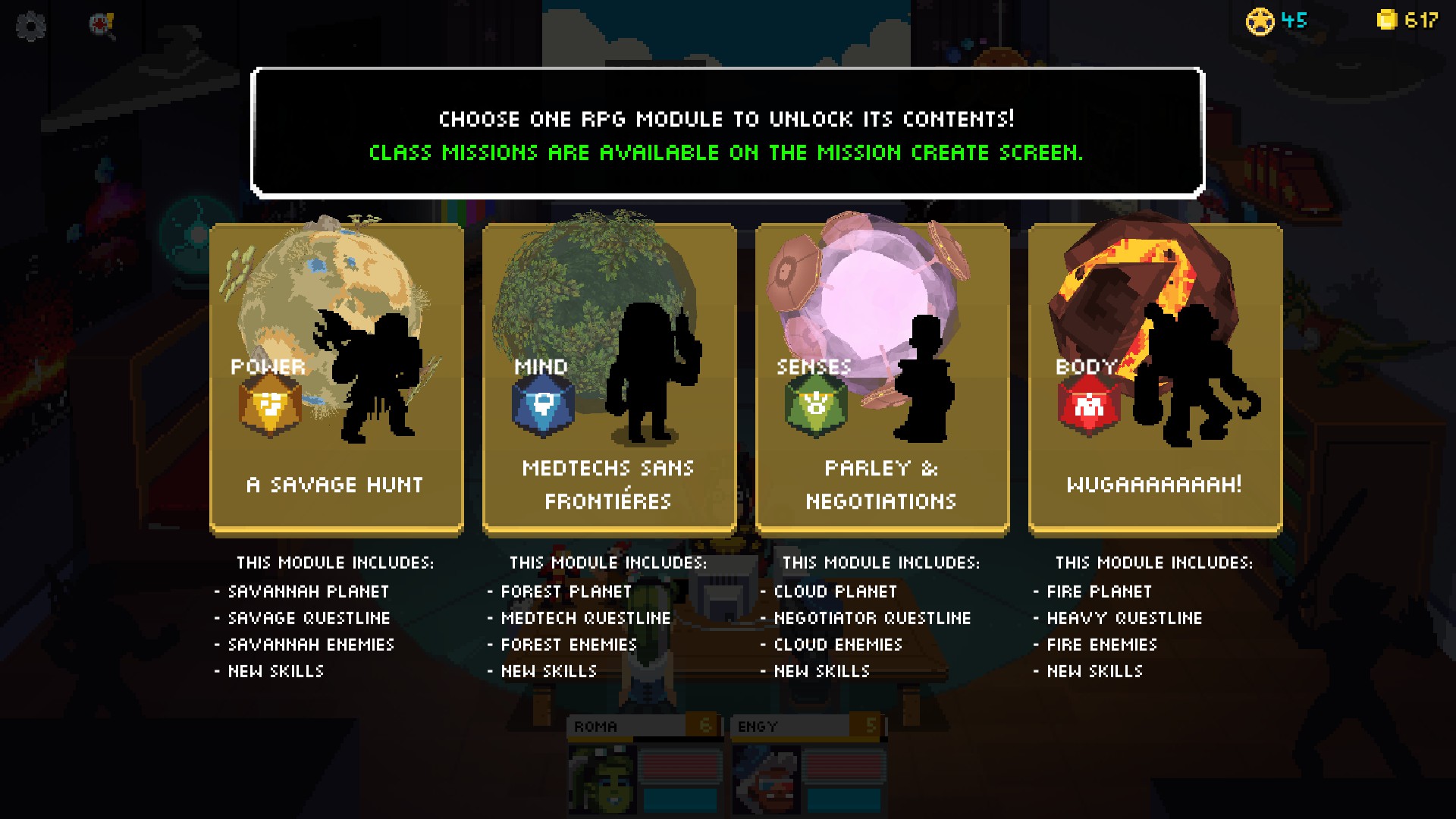 The real joy in the game comes from the great script and the obvious familiarity that the developers have with pen-and-paper roleplaying. Interludes where the GM tries to keep easily distracted players on track, their ‘real-world’ conversations interrupting the game, and each character’s archetypal personality traits are all extremely well done. Pop-culture references are great, too.

At the time of release the game still has some issues that I’m sure will be fixed, but they do detract from the experience regardless. The script has a number of small grammatical errors, but for the amount of writing the quality is still very good. There are times when the game refuses to let you progress, such as when you talk to an NPC at a location while you’re in the middle of a quest and there’s a failure in whatever script trigger is supposed to fire off. All you can do then is quit and reload. And sometimes the game doesn’t load at all, leaving you with a black screen with ‘Loading’ in the bottom right.

In my opinion the game’s balance is also a bit off, with enemies who can use their overpowered special abilities over and over again without running out of SP, turning those battles into a combination of luck and hit-point attrition. 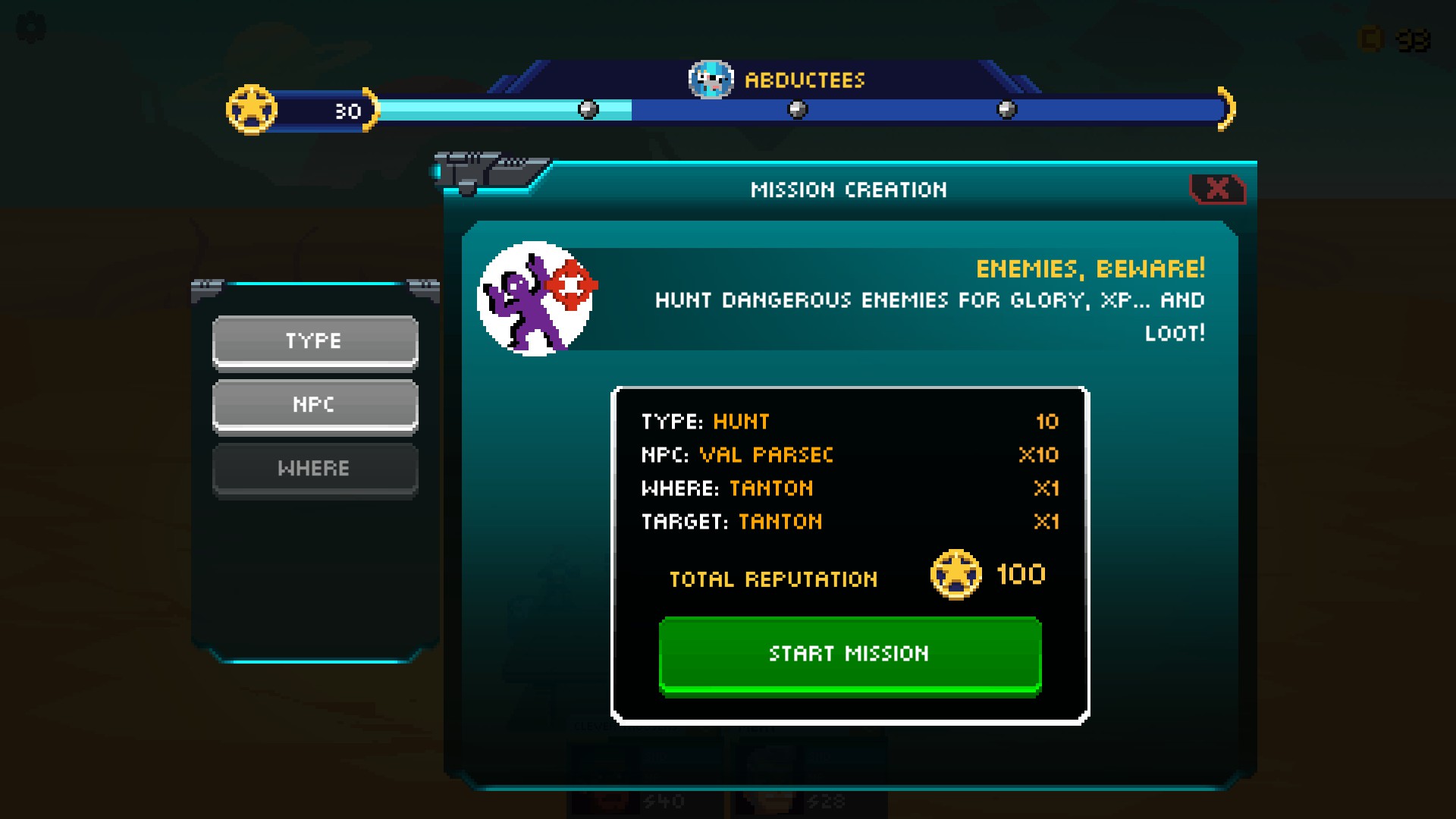 I’m a fan of the series and I’ve been looking forward to this game. The script and ‘in’ jokes are fantastic and the pixel art is excellent; probably even better than in the previous games. The story is derivative, but that’s exactly what the writers were going for, I think; it’s great fun! The game does have some issues, though.

Pick it up now if you absolutely love the series. Otherwise, wait a bit for the developers to fine tune it some more. But make sure you pick it up then!