The Initial is a new anime beat-em-up game with lovely character models and a wacky script from Restory Studio.

The Initial is the debut title from new indie developers, Restory Studio.

In The Initial, you play Ruri, a schoolgirl at the special SPE school for students with ESP. For some reason that isn’t really explained, you carry a big sword with you everywhere you go, and your best friend is another schoolgirl with a large sniper rifle. Your school also doesn’t seem to have a set uniform, but you look pretty sweet in your dress, anyway.

The game begins with you hanging out enjoying the scenery while you wait to meet up with your friend, when a “replicated girl” suddenly appears nearby. You turn to face her (it?), ready to defend yourself, when — boom! She’s obliterated into little floating light cubes by a rifle shot.

Accompanying Miss Rifle (I can’t remember her name; sorry), you soon learn that an evil organisation has taken over the ESP towers (!) and is siphoning off the energy of the students, leaving these replicated digital versions behind to defend their handiwork. Not being one to put up with such nonsense — okay; your friend talks you into it — you head off to do battle and free the school from extra-sensory oppression.

The anime-inspired graphics in The Initial are its obvious draw card. The character models are beautiful, with clean lines, great fighting animations, and lovely shiny mapping effects. Cut scenes are presented using the game engine and they look nice, with no obvious intra-model clipping that’s so common in many other games. It’s a shame that the facial expressions are so wooden, though; a bit more emotion in the faces would have made a world of difference. 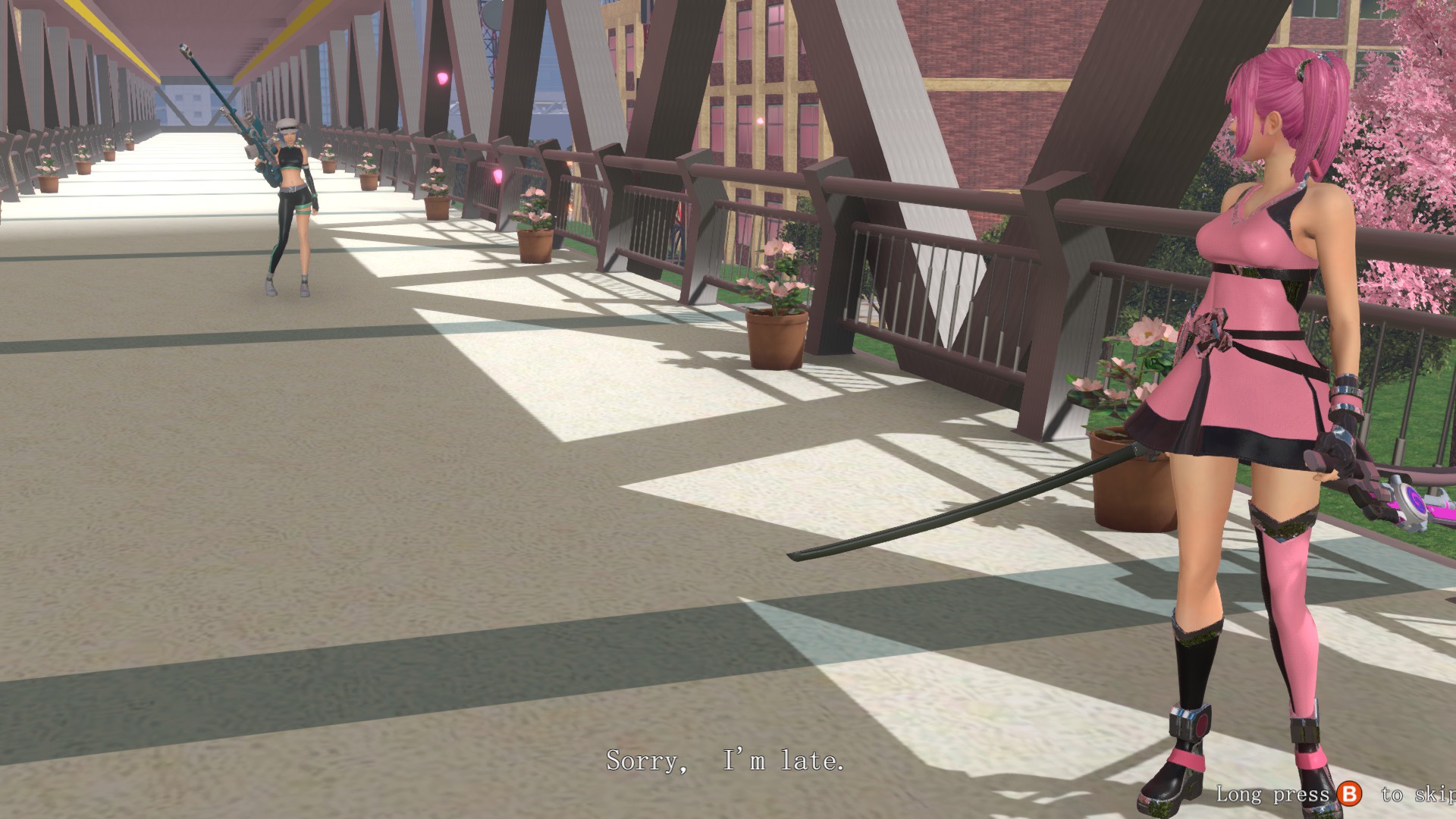 I’m a little surprised — and maybe sad; I’m so conflicted! — to see that there are no jiggle physics. These days games like these ALWAYS have jiggle. Instead, Ruri is unconventionally proportioned in a more realistic manner than most anime-themed beat-em-ups, though I can’t say the same about some of the other characters, and there’s no fan service whatsoever. Well, maybe a little bit; the shimapan flashes are a pleasant distraction on occasion. 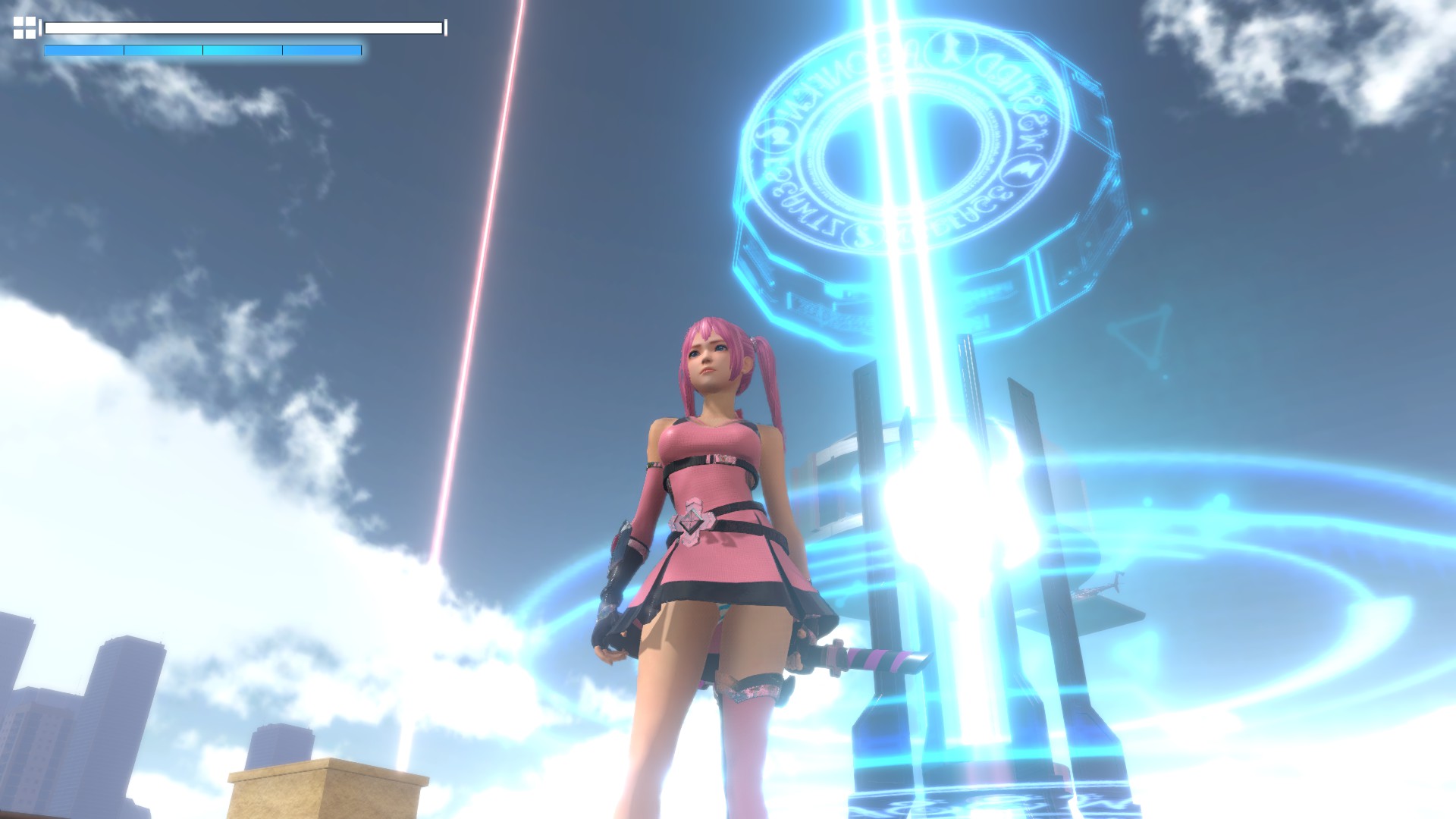 The game is set across four or five different levels, each with a different theme to it. The background graphics are quite nice, but generally fairly basic, with simple textures and not much detail. The sakura trees in the first level are lovely, though. 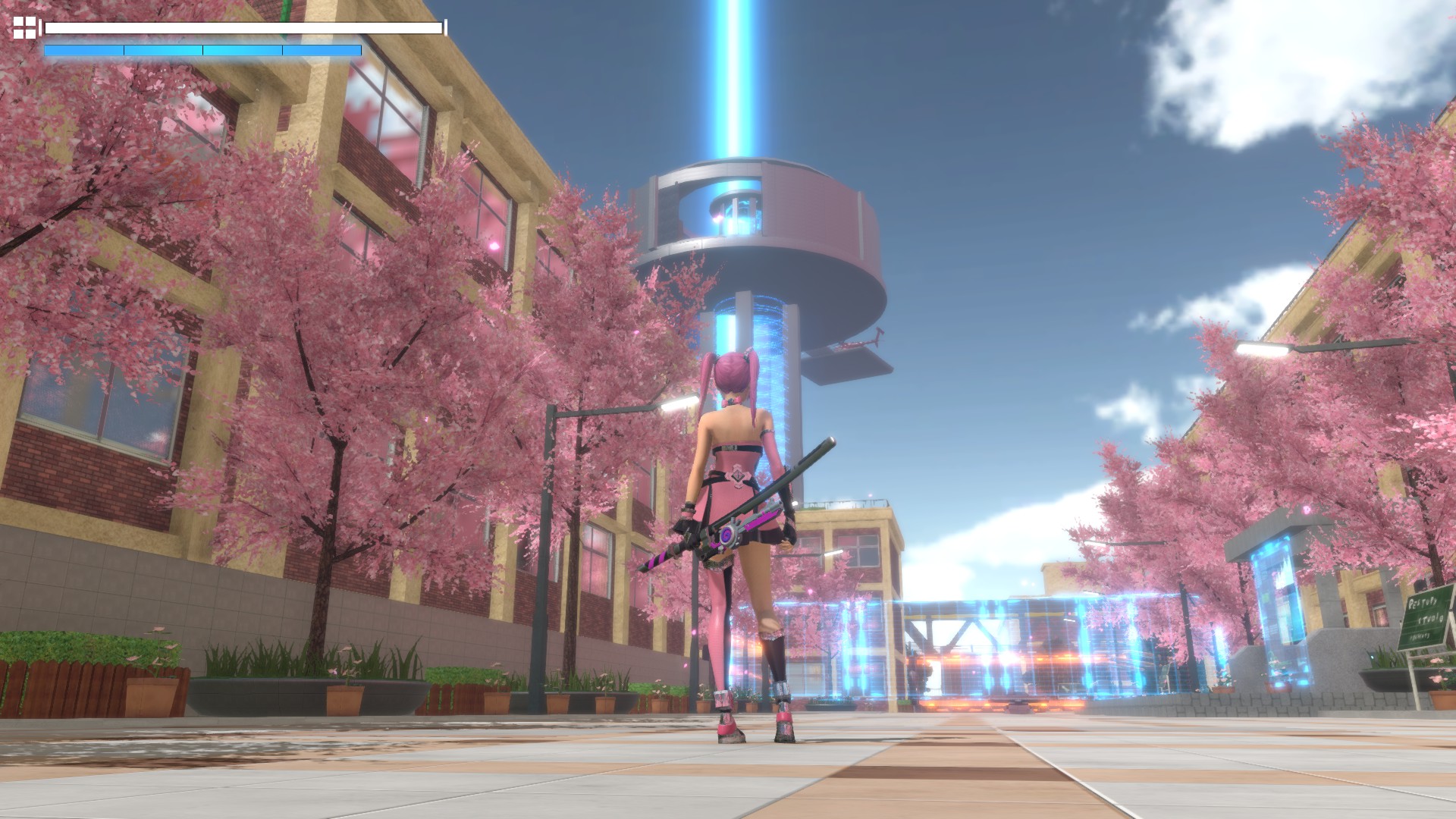 There are half-a-dozen or so graphics options to play with, but after turning everything on I didn’t need to touch them again.

The game features typical anime game / beat-em-up music, that is exceptionally well produced and almost immediately fades into the background once you start playing (figuratively, if not literally as well). It’s a mostly forgettable sort of electronic rock with high-tempo beats and repetitive riffs, but it suits this sort of game perfectly. I can’t say I’d want to buy the sound track, though.

Sound effects seem quite limited, but they work well. You quickly get to learn the start-up sounds of the few ranged attacks that you’ll have to face, allowing you to dodge them even when they’re from an off-camera enemy.

The game features Japanese voices that sound good to me, though I have no idea if they’re actually saying anything like the subtitles suggest. 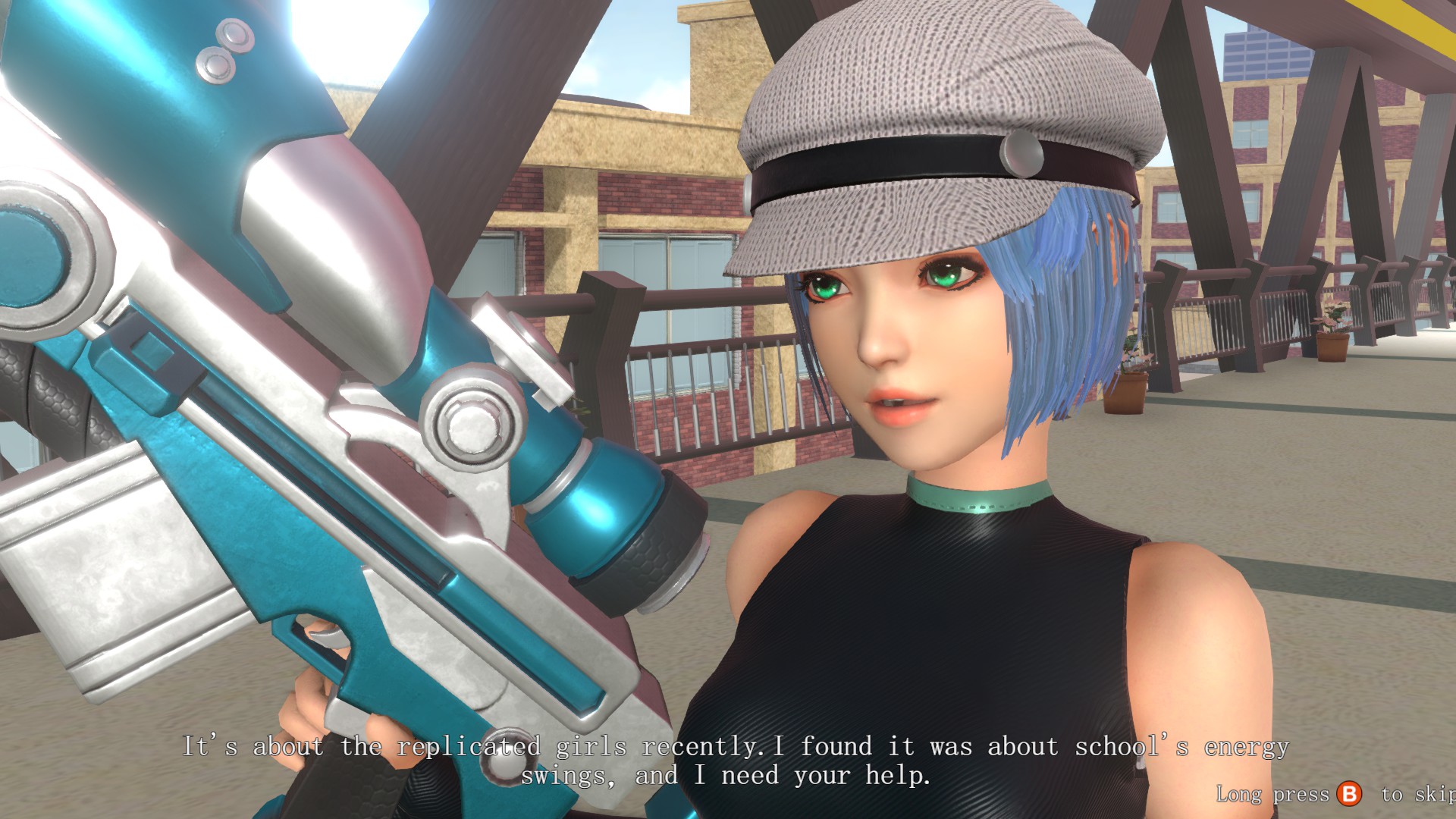 The Initial takes the rather common 3D fighting beat-em-up across a linear series of rooms and does very little with it, to be blunt. The controls on offer are the rather common light or heavy attack, with limited set combos, jumping, juggling, and aerial attacks, as well as a rechargeable sort of ‘energy bar’ to power your ranged, charged, and single special ‘bomb’ attack that hits everything on screen. It’s all been done before and The Initial doesn’t stray from the tried-and-tested formula, but what is here is actually very good.

The game features full controller support and a sensible default layout; there’s keyboard support and remapping of controls, I think, but I didn’t need to fiddle with either. Basic offensive moves are easy to time and chain into each other, with easy enemies in particular often opening themselves up to juggles and slow-motion finishing moves. Defensive moves are easy to time and can almost always get you out of a tight spot with only minimal reduction to your health bar. The animations flow nicely into each other, making the game’s pacing feel fast, but still controllable. 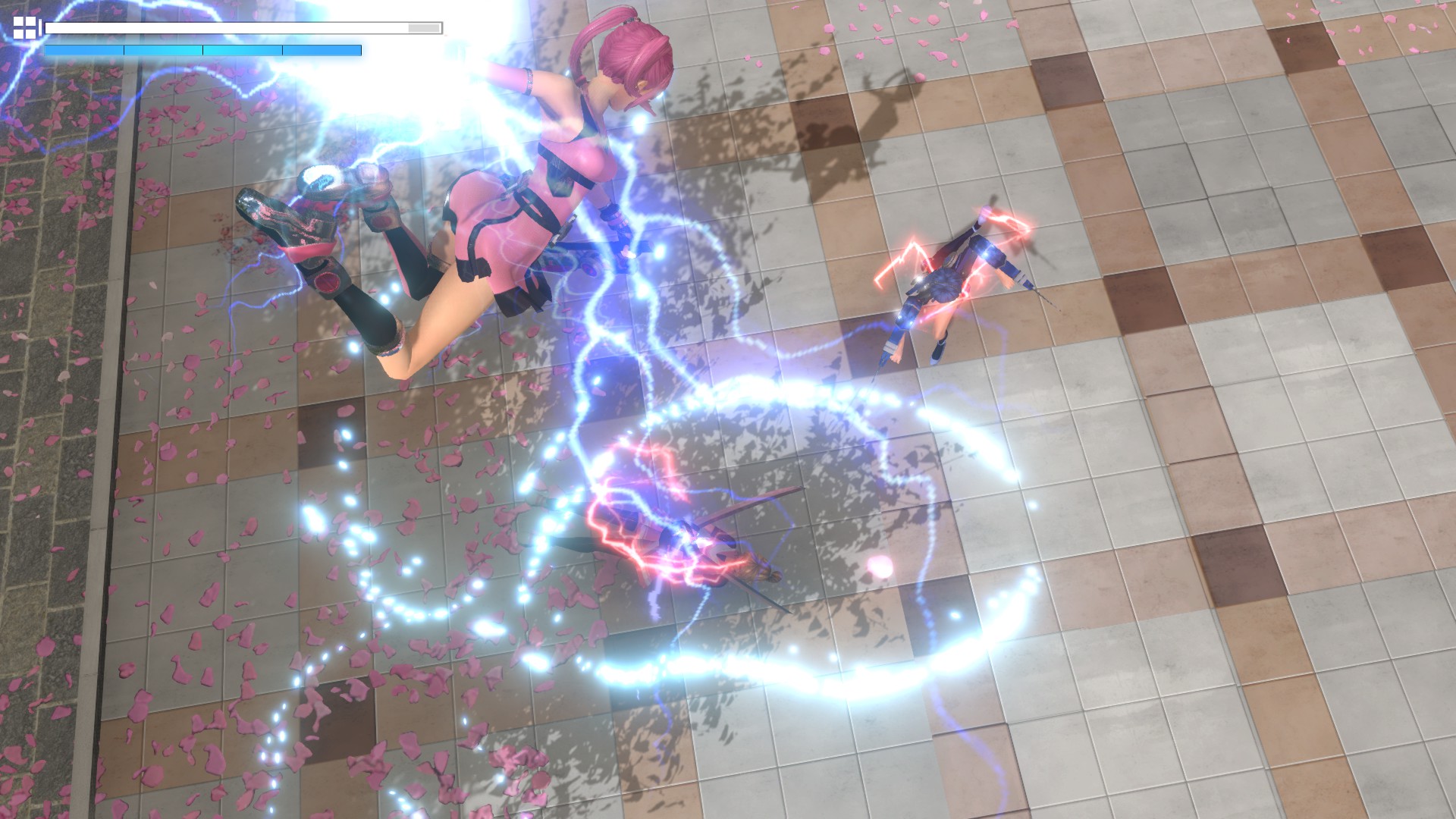 The game is broken up into a number of levels, each of which is made up of a number of areas that you play in a set order. You fight waves of enemies in one area, unlocking the exit to the next area, where you fight waves of enemies to progress again. Once you’ve fought your way to the end of the level you meet a boss. Kill him or her, and you move onto the next level, until you finish the game.

The script is full of grammatical errors and the story is bonkers, but it’s lovable in that crazy anime way. When you meet the first boss and he introduces himself as “HANDSOME … STRONG … HEARTTHROB MAN … Ryuzaki!” in a series of poses, you can’t help but enjoy yourself. 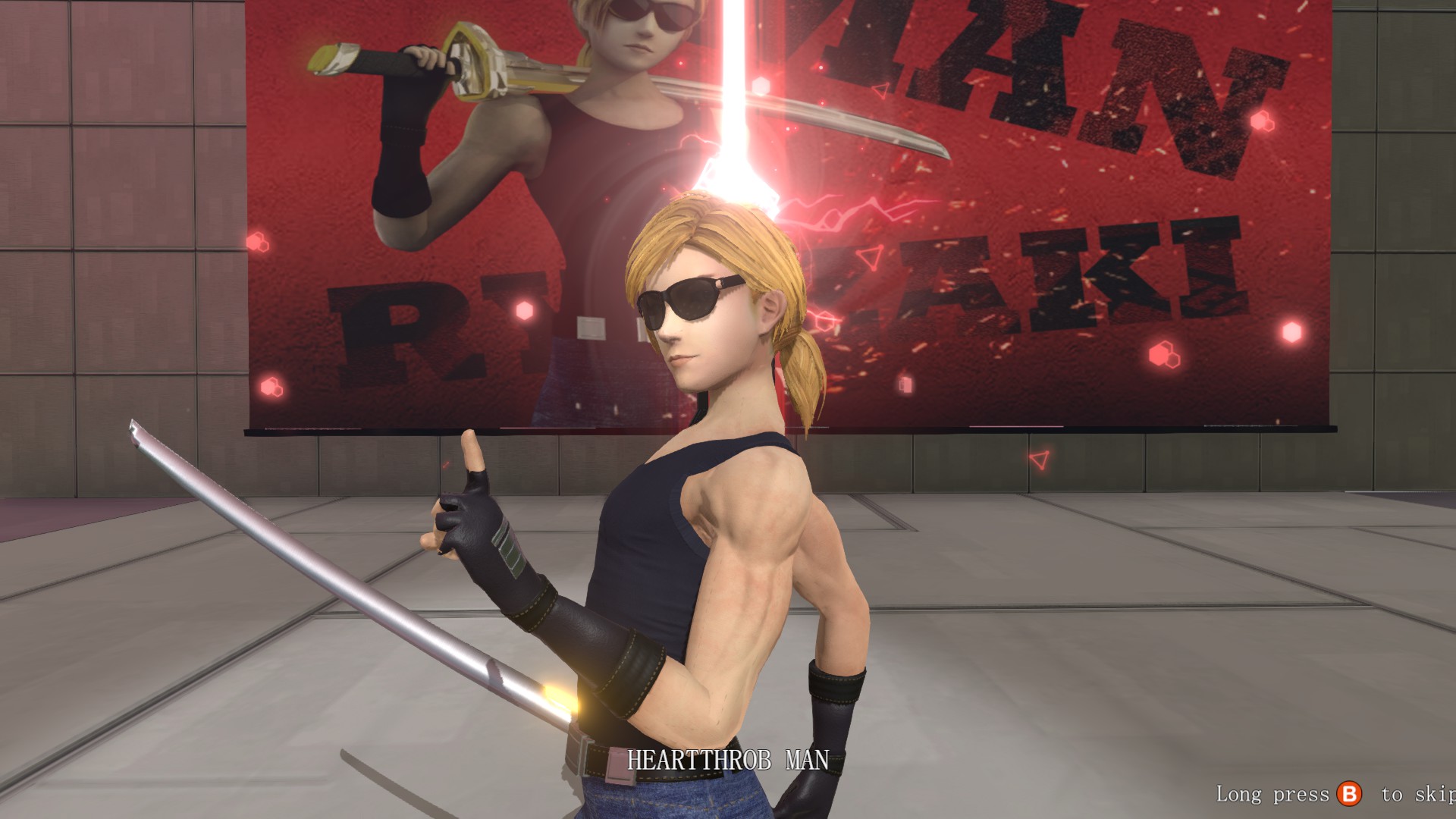 As you fight you get awarded coins to spend on unlocking new moves. These are mostly longer combo chains, though there are a few nice new move types in there, too. You can spend your coins at any time by pausing the game and entering the moves list menu. The game saves after each screen, allowing you to continue from your last completed area if you die, and, to my relief, you can continue if you quit to the main menu as well (though this may only work at the start of each level). 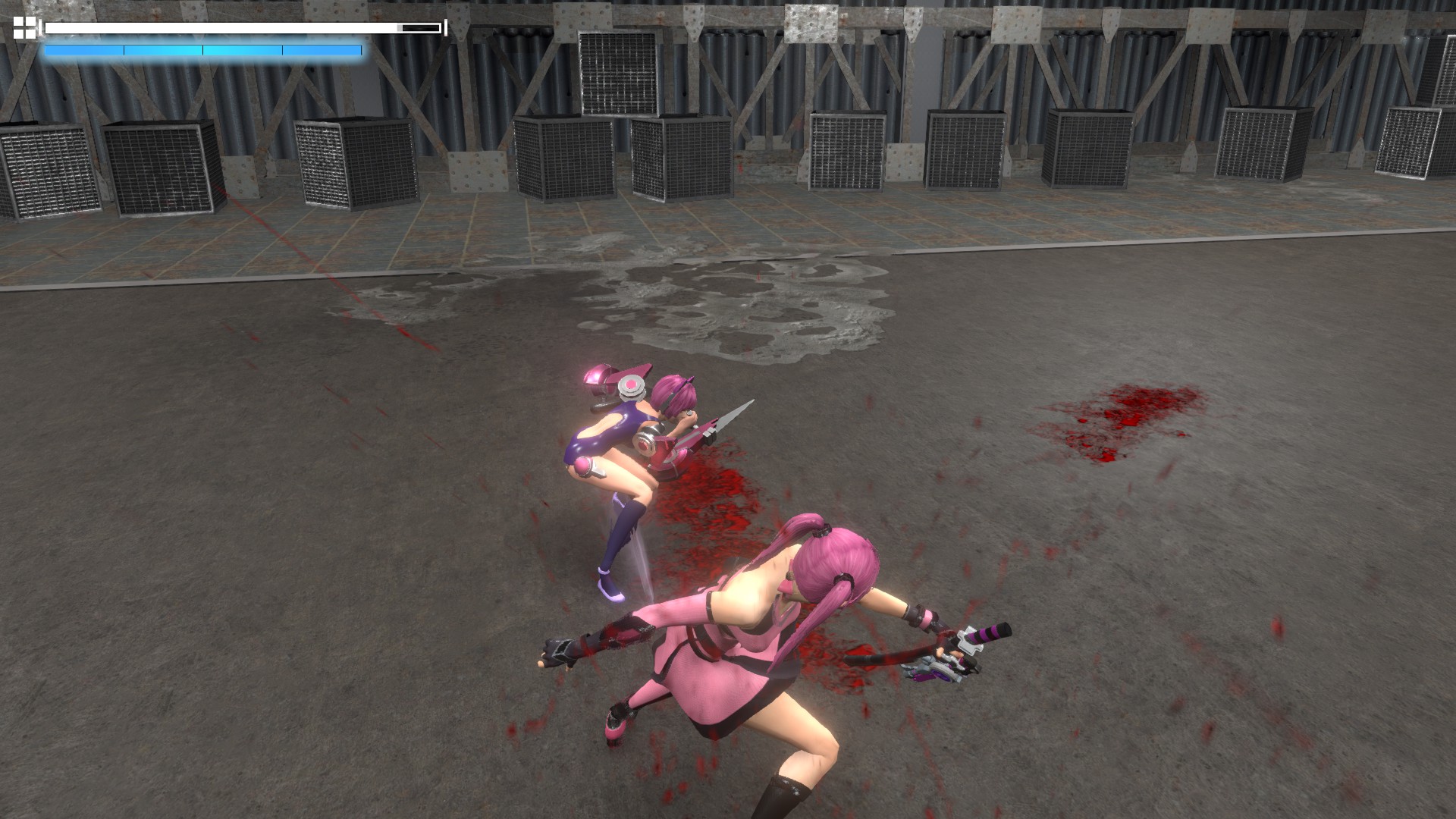 So what The Initial does, it does well. But I’m sad to say that it doesn’t do that much. Each area in each level is only populated by up to a handful of enemy types, so as you fight your way through the game, you’re doing so fighting the same enemies that you fought in the first level, over and over and over again. They seem to become mildly more difficult as you progress, but essentially the same tactics that work on Level 1 will work right up to the end of the game, with only the bosses offering you unique challenges.

Though the game seems ripe to offer more, you can only play as Ruri, and unless you’re absolutely terrible at the game you will have unlocked all of her extra moves before your first play through is completed. The game’s not very long either; I finished a complete play through in just over two hours with 14/20 Achievements. 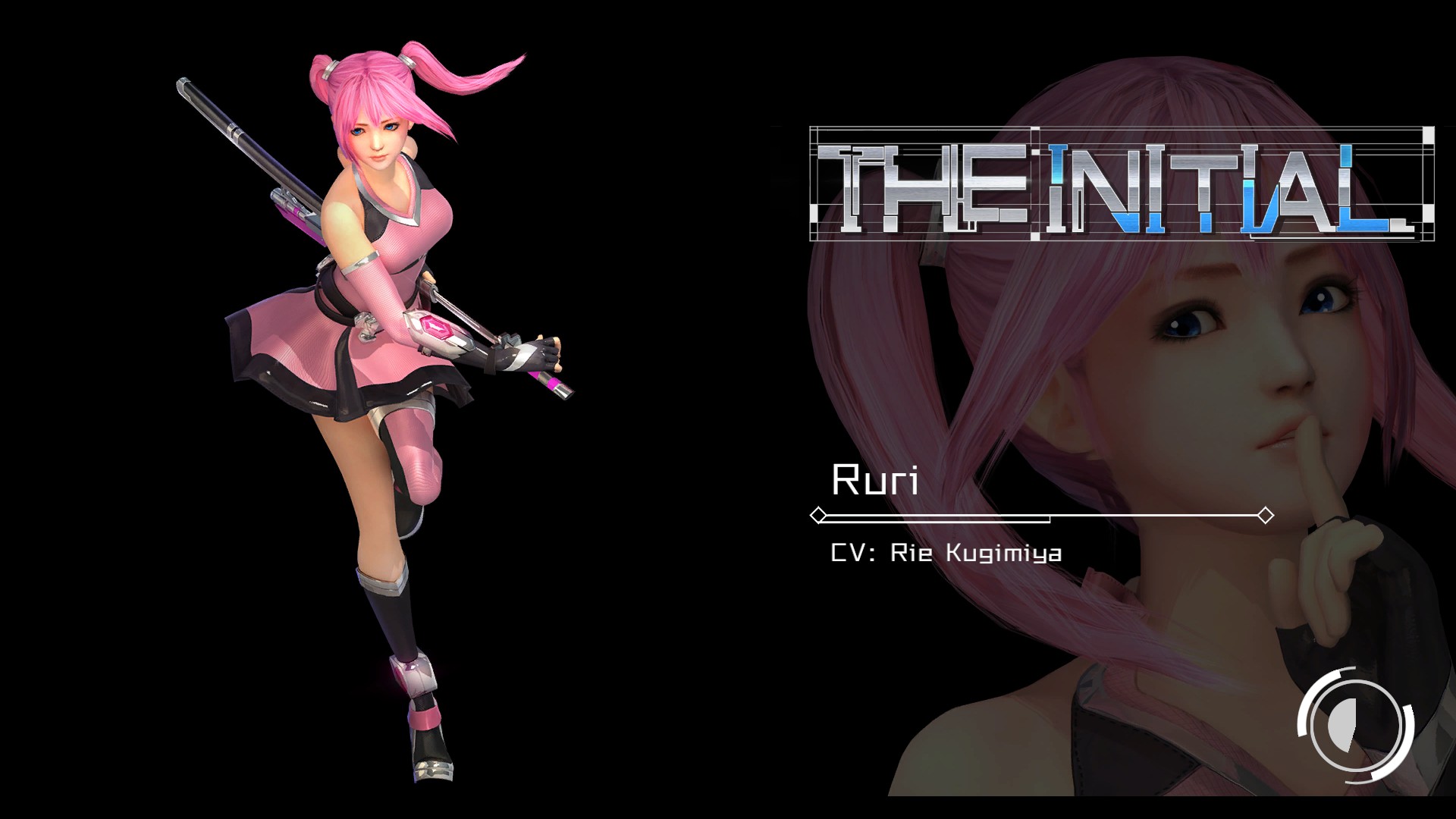 The game offers Steam Achievements, which you’ll only fully unlock if you finish the game in every difficulty mode, but after restarting in the next difficulty level I couldn’t bring myself to play even through to the end of the first level for a second time; once you’ve played once there seems to be nothing new to motivate you to play again. And that’s a shame, because with more variation, more progression, more unlockables, and a reason to replay it, the Initial could have been a great addition to the genre. 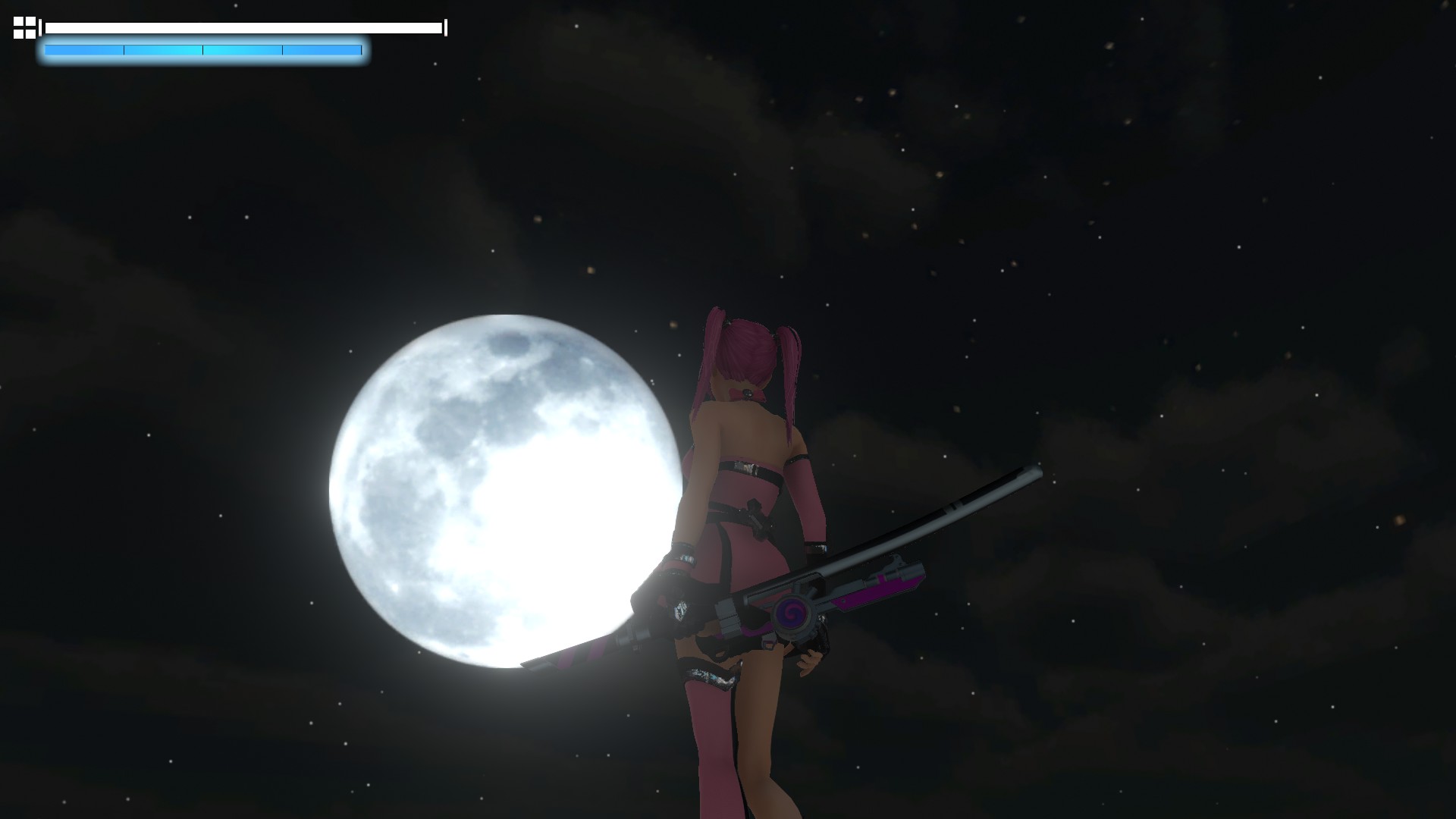 The Initial is more fun than it should be. Its combat is finger-strainingly repetitive and it has only a few enemy types to beat up, over and over again, using a fairly small array of moves to do so. But the wacky anime story kept me playing to see what would happen next, and the beautiful character models and fluid animations gave me something nice to look at while I did. Longevity suffers from lack of variation and progression, but it’s good fun for one play through at least.