We Slay Monsters is a turn-based, card-based rogue-like dungeon crawler with charming graphics and a weird sense of humour.

In We Slay Monsters, you take the role of a headmaster given the task of restoring the once great Academy of Dungeoneering to its former glory. You see, after a long period of peace and prosperity, during which the Academy fell into disuse and disrepair, now there are stirrings of doom and destruction. Farm animals are going mad, it seems, attacking and capturing the citizens of the land, and with all of the old heroes retired or dead, a new stream of dungeoneer graduates is required.

Once the academy has been restored to full operation, you take on missions across the land to find the cause of the current disturbances and restore peace to the land, or something like that. 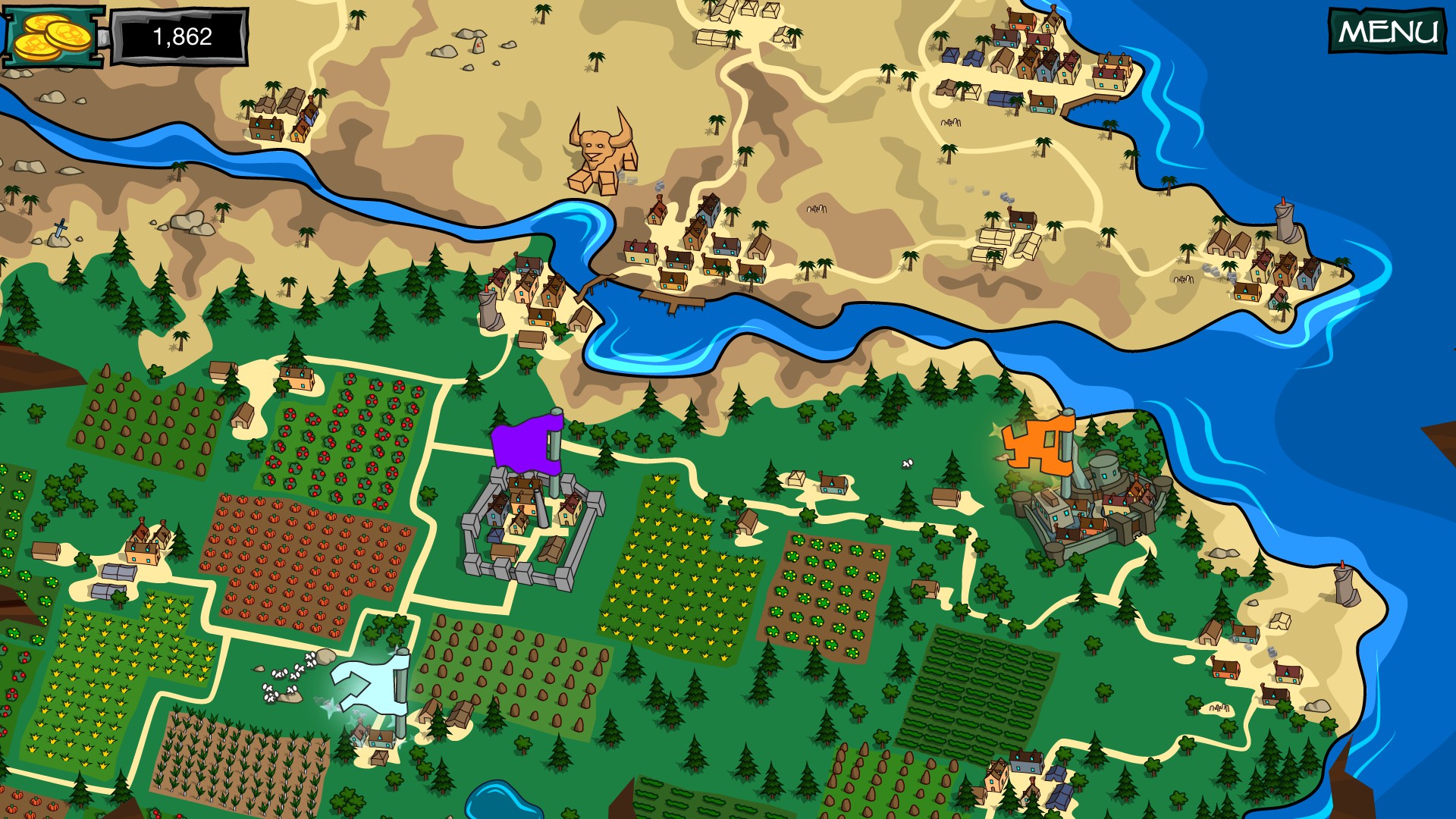 The graphics in We Slay Monsters are very simple, but with considerable personality. The game is played from a top-down view, with a weird perspective that makes the walls of the dungeons appear very short. Each dungeon is a tile-based map and the tiles fit together well, but there’s not a whole lot of variation in room shape or tile graphics. There are a few different themes — dungeons, farms, etc. — but once you’ve seen one or two stages in each theme, you’ve probably seen everything there is to see in terms of maps.

The character graphics are much more creative. They’re displayed from a sort of two-dimensional side-on perspective and drawn on top of the map, which works quite well, though you’ll occasionally find yourself clicking on your character rather than the map behind him or her. Your graduates look very green and wide-eyed, as they should. Some wear spectacles, and they all start out with the most basic equipment: in the case of a wizard, a crude magic orb and crude staff. As you collect or upgrade your equipment your character graphics change to reflect your new acquisition, both on the map screen and, sometimes rather comically, on the character screen as well. Though simple, the effect is fantastic and really suits the game. It’s just a shame there’s not more variation in equipment. 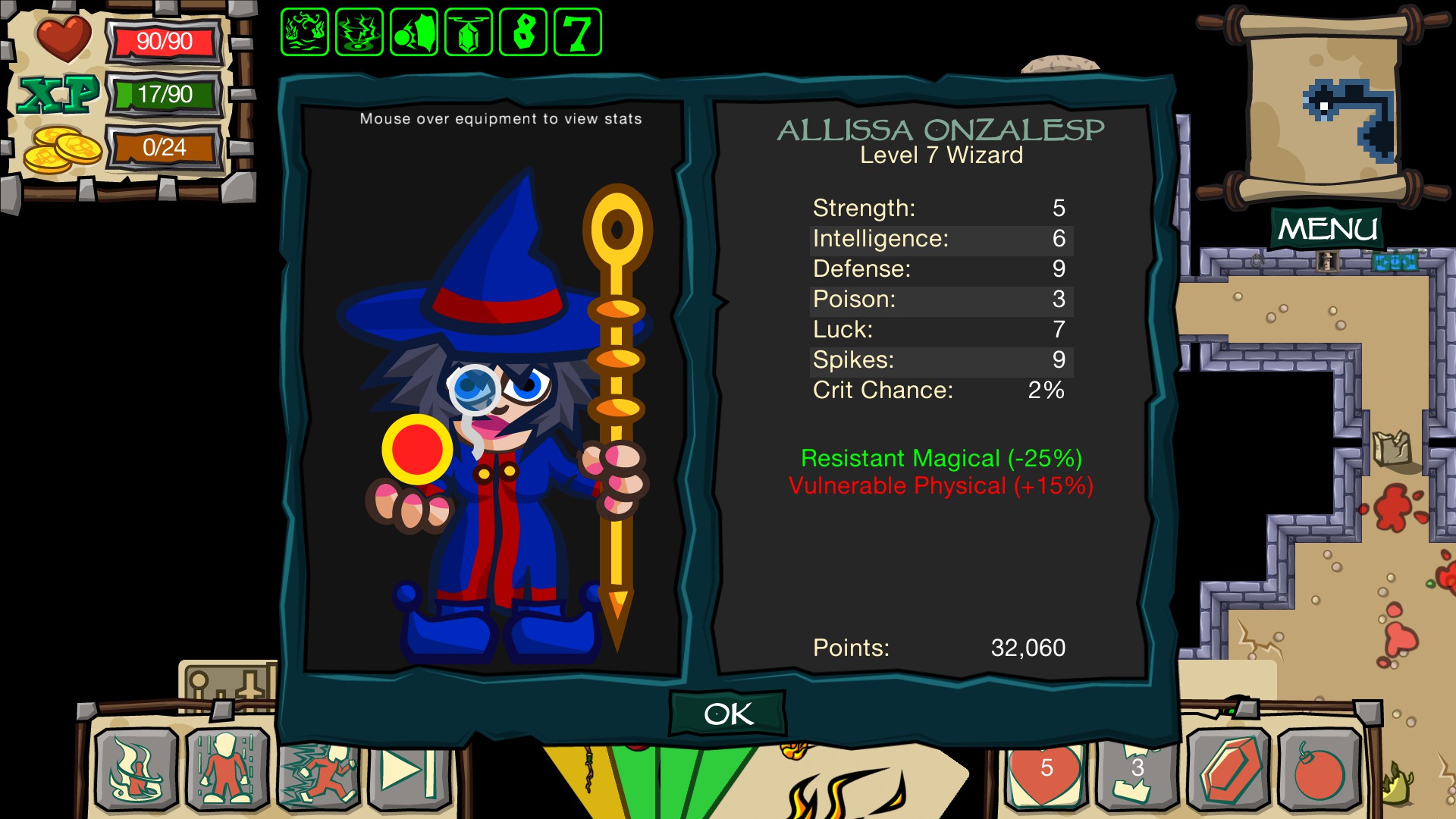 Enemy graphics, too, are mostly well done. You’ll see crazy, wild-eyed cows and goats; zombie chickens (soon-to-be headless zombie chickens); explosive sheep with evil eyes; and a number of other weird evil-infused animals. They’re drawn well and each is worthwhile examining close up on the creature screen, together with their abilities and in-game effects. Playing cards are simply drawn, but easy to distinguish. Card effects are good, too. 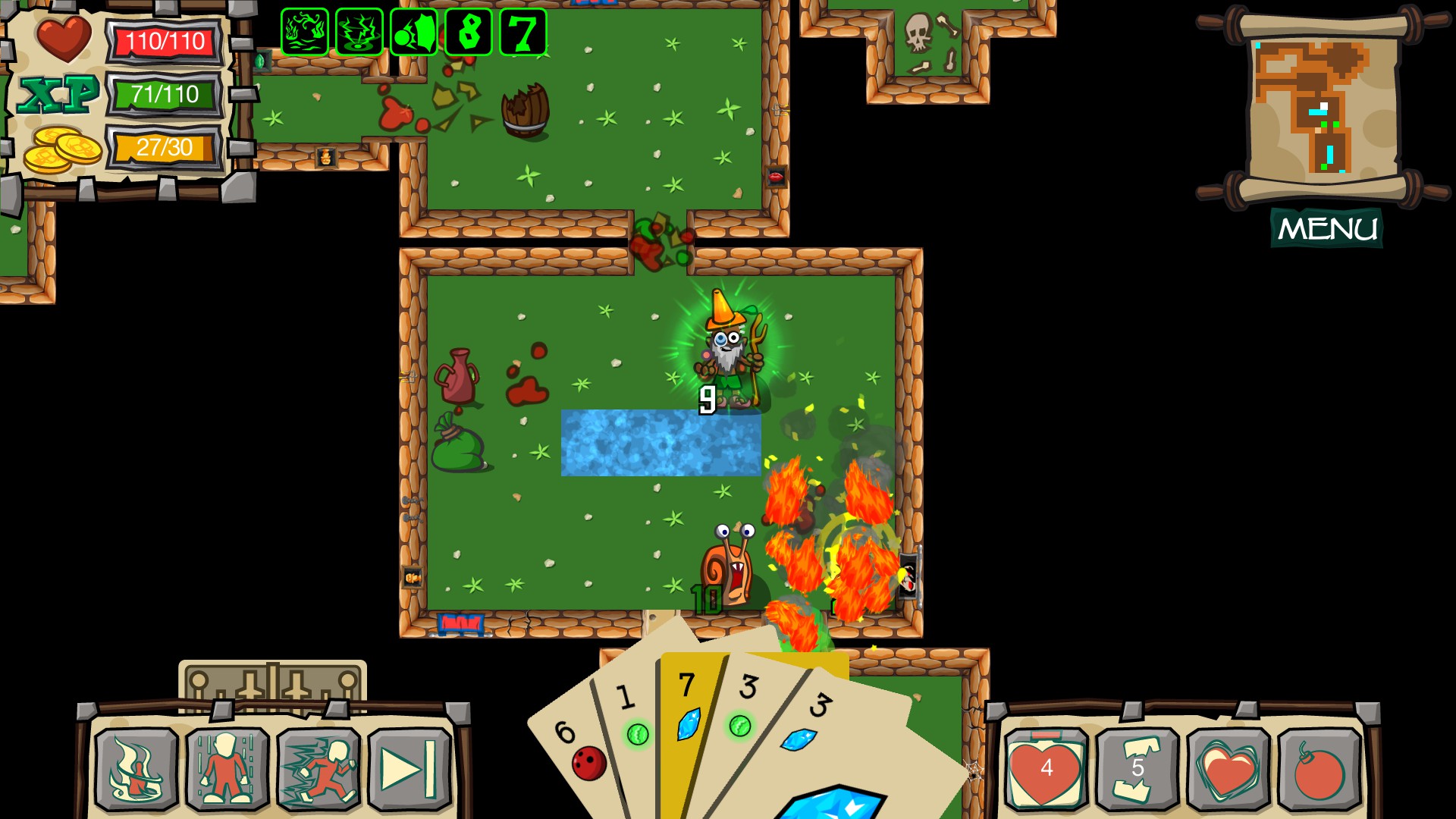 There are no in-game options. The standard Unity launcher is used, allowing you to select a resolution, full-screen or windowed mode, and a detail level, ranging from good to fantastic. I didn’t encounter any performance issues.

I think I only heard one music track in the game, but I may be wrong. In any case, the music fits the game well, with a sort of minimal classical sound that’s a bit quirky. It’s unassuming and makes nice background music.

The sound effects are appropriate and fit their actions. Sometimes they sound a bit like the soundtrack to a slapstick comedy sketch, but that fits the game well, too. 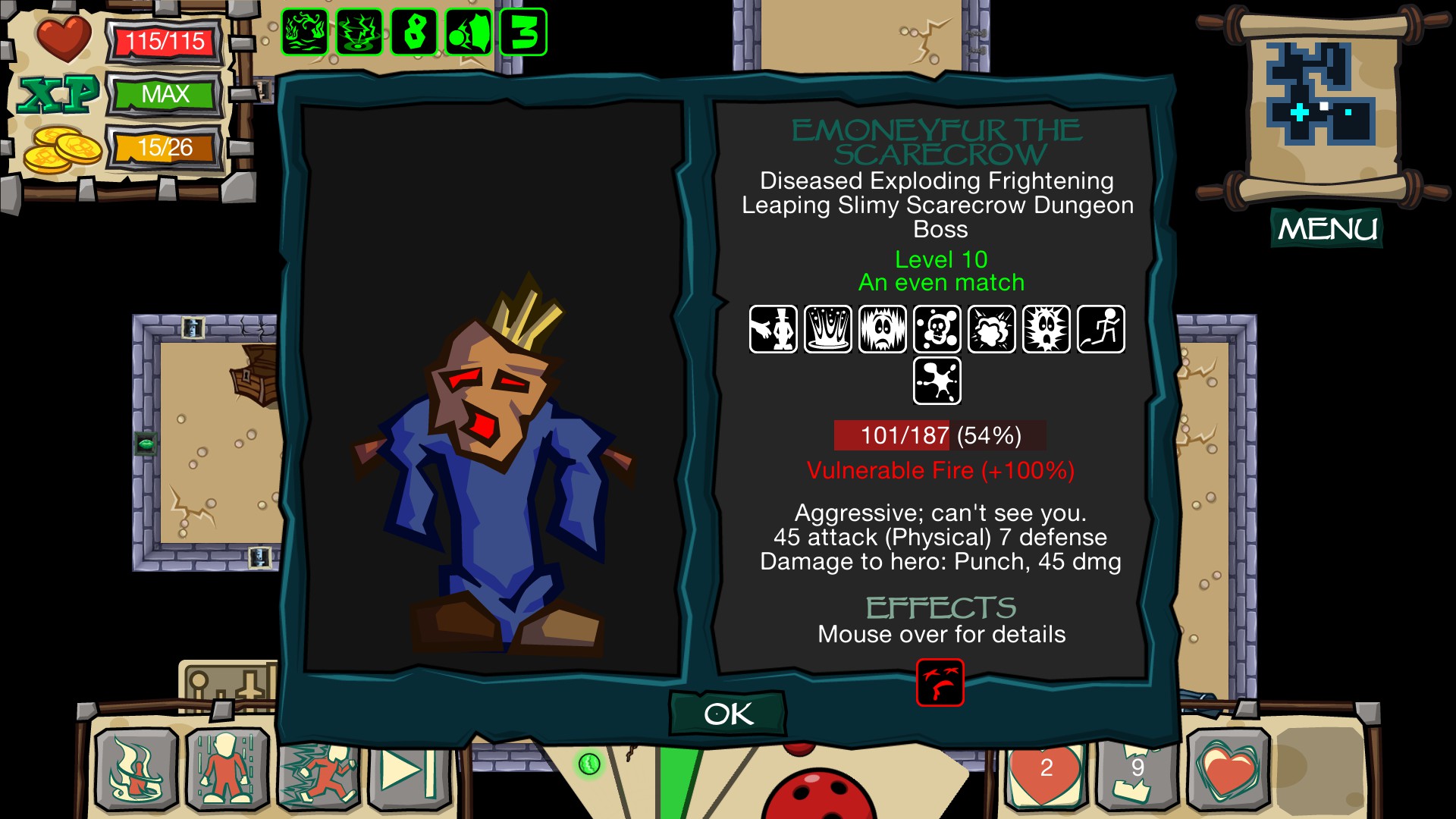 We Slay Monsters plays like a traditional turn-based, tile-based rogue-like dungeon crawler, but in place of normal attacks, you have a hand of five cards, with which you attempt to make poker-like hands to cause damage to your enemies. It’s also rather silly, with your heroes being young, wide-eyed graduates and many of your enemies being crazed farm animals. 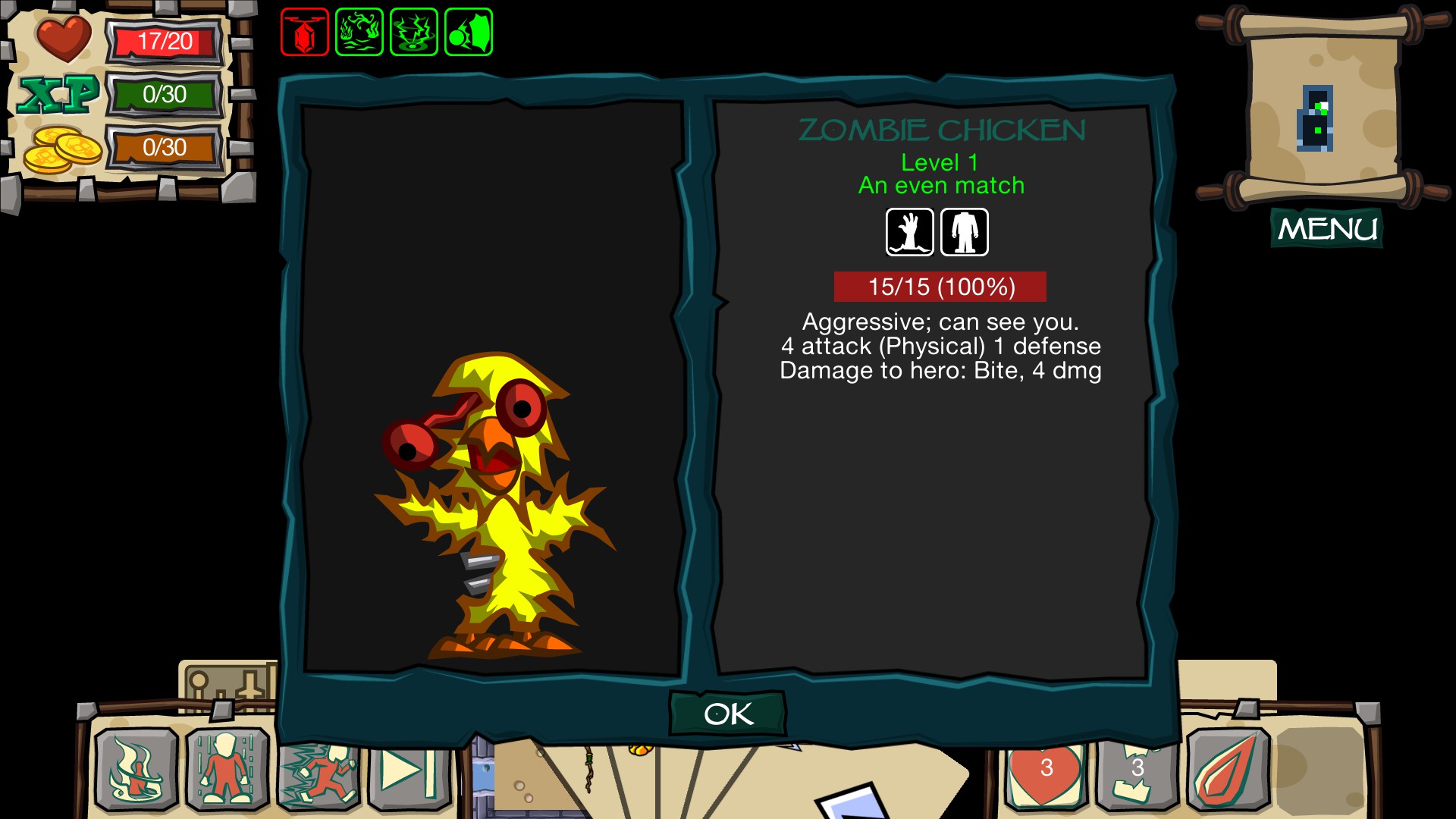 The cards you have available come in a deck of 54 cards with numbers one through nine from six suits, which depend on your chosen class: wizard, warrior, or rogue. Some suits are used for range attacks and others are for melee. Each suit has a special effect that triggers when you use a single card of that suit, and a super special effect that triggers when you use at least three cards of that suit. Effects can be very different, from extra turns, to teleporting your target or shrinking them, to turning them into a rabid duck that attacks the closest target. 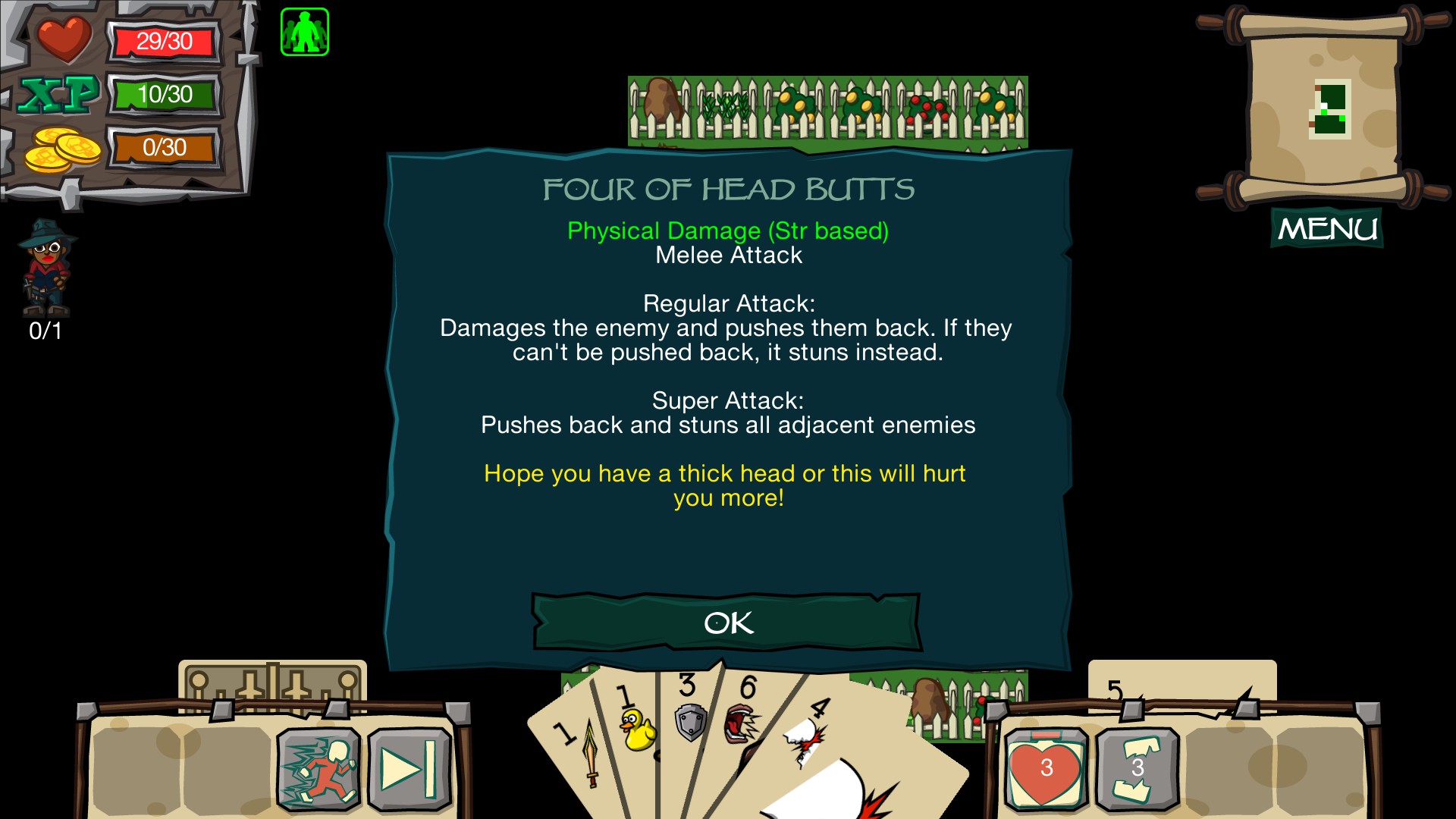 Collecting loot dropped by monsters or lying about in the dungeon can give you gold, which when you’ve collected enough, allows you to buy one of six random items from the shop, or may give you an item. If you don’t want the item you can always choose to sell it immediately for more gold. Regardless of class, your character can hold four usable items and has five equipment slots: head, body, feet, main hand, and off hand. You start with worthless items in your main and off hand, but through finding and buying new items or upgrades, can end up with some pretty potent combinations. There aren’t many item types or different bonuses available, though, so you’ll quickly see everything that’s available. 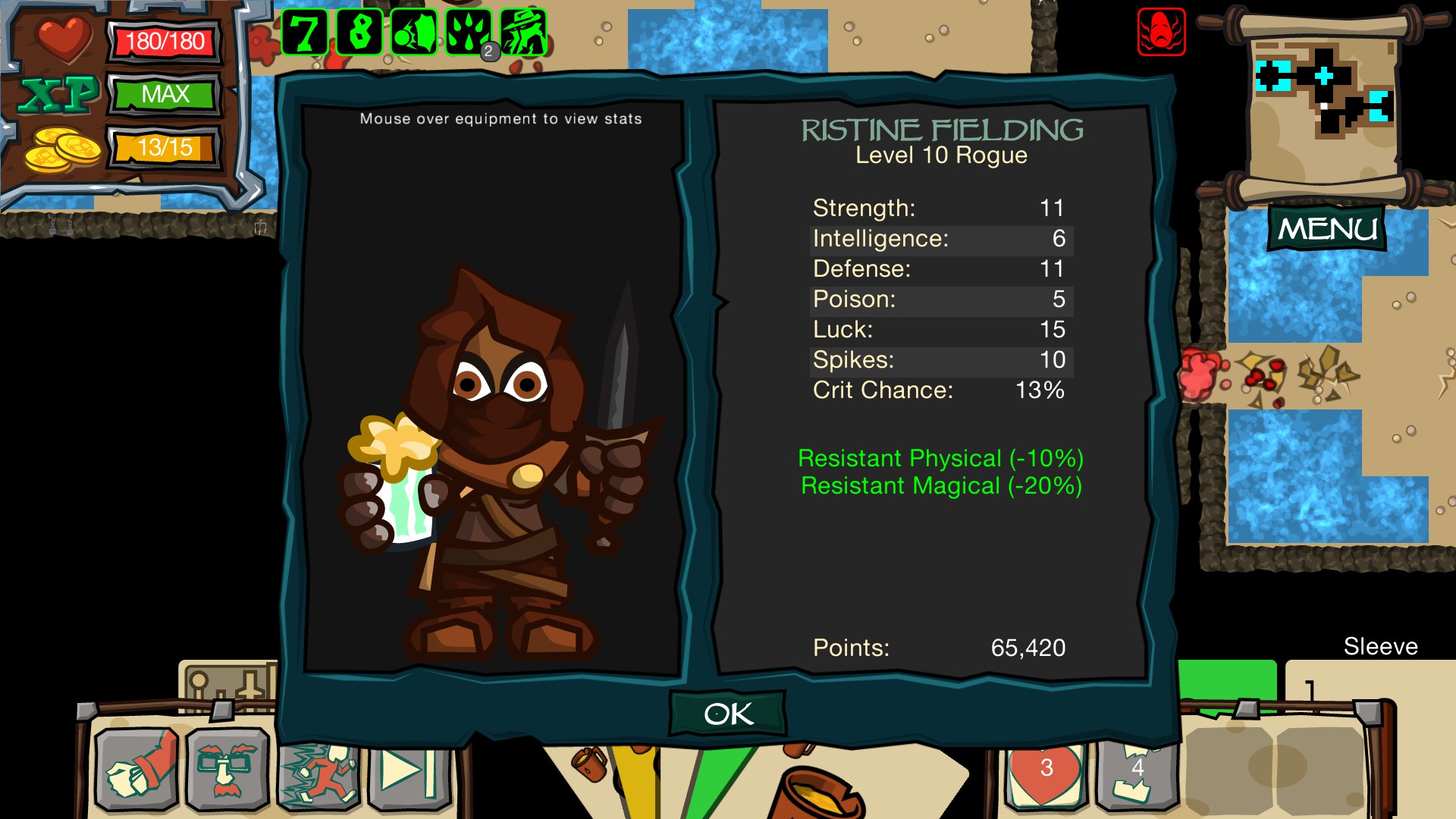 Killing enough monsters gains you a level, which awards extra health and a choice of two new perks from a randomly selected list. These include basic stat modifiers as well as special abilities that trigger when certain cards are drawn. As each graduate can only reach level 10, a number of the abilities that are related to experience points are worth less than you might expect. And as each graduate can only be used once — they either die, leaving behind a grave for you to plunder next time you attempt the mission, or they succeed and graduate, never to be seen again. This reduces long-term progression, which is a shame. 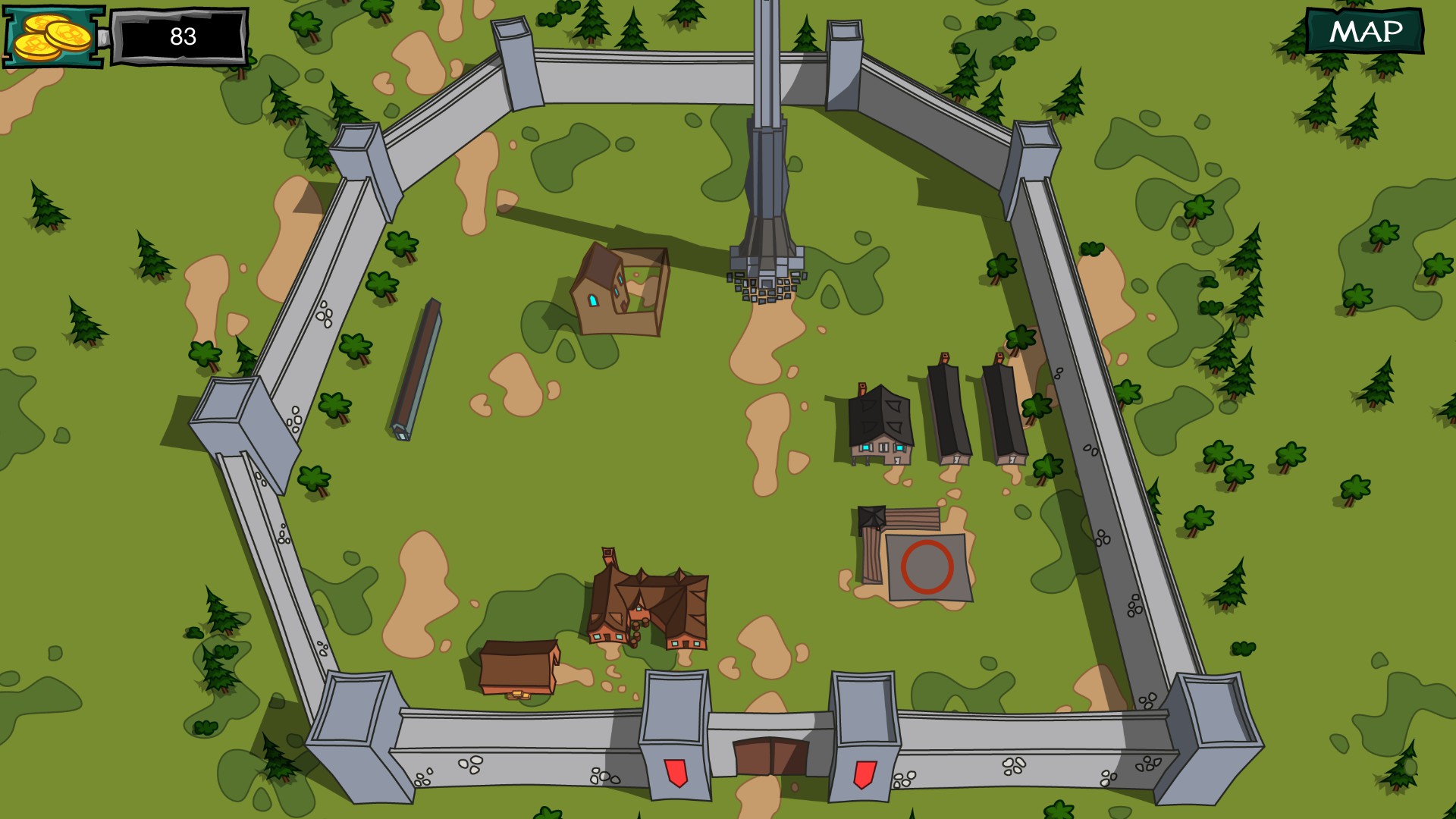 Gold that you’re awarded for completed missions can be spent on upgrading the academy’s buildings, which can grant certain active or passive abilities to the character types. Later on, you can unlock a couple of other buildings, but each one only has a limited number of benefits available, so again, once you unlock them, you’ll quickly see the upgrade potential (though it will take you some time to reach it).

As well as the story missions there are also ‘random’ (side quest) missions to keep you busy, as well as a leaderboard-scored challenge dungeon that changes regularly.

It’s not all smooth playing, though. The game does have a number of bugs:
– in-game badges and Steam Achievements not being awarded
– some starting bonuses not working
– hands becoming stuck, with new cards are drawn over the top
– items bought in the shop not always being equipped
– characters starting with equipment from previous characters 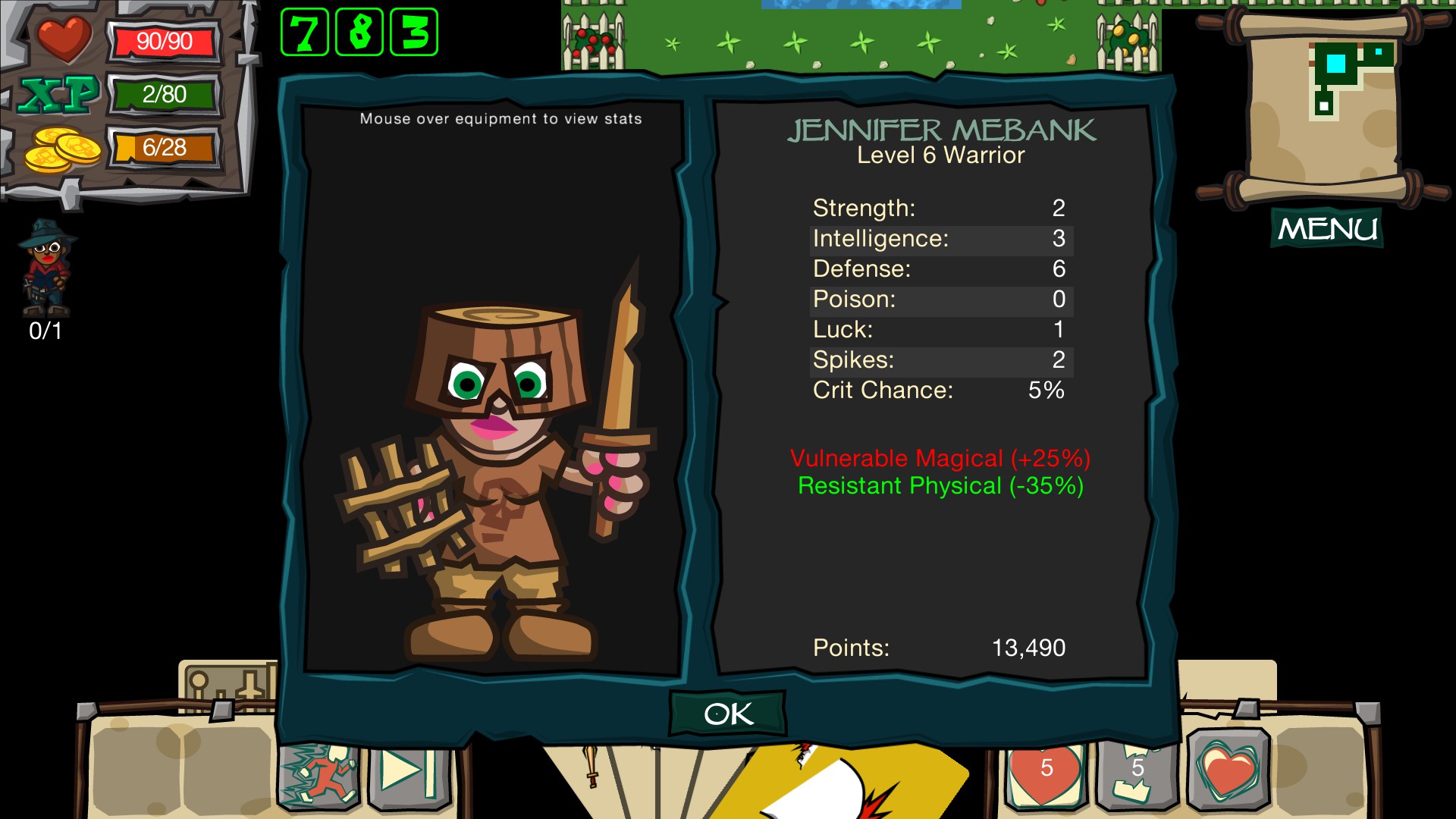 We Slay Monsters is a fun and addictive card-based rogue-like dungeon crawler. The simple graphics and wacky humour are appealing, though are sometimes a little too much. The card-based gameplay works well, but does become repetitive quickly, and the game doesn’t have enough longer-term progression or variation. It’s also a bit buggy. 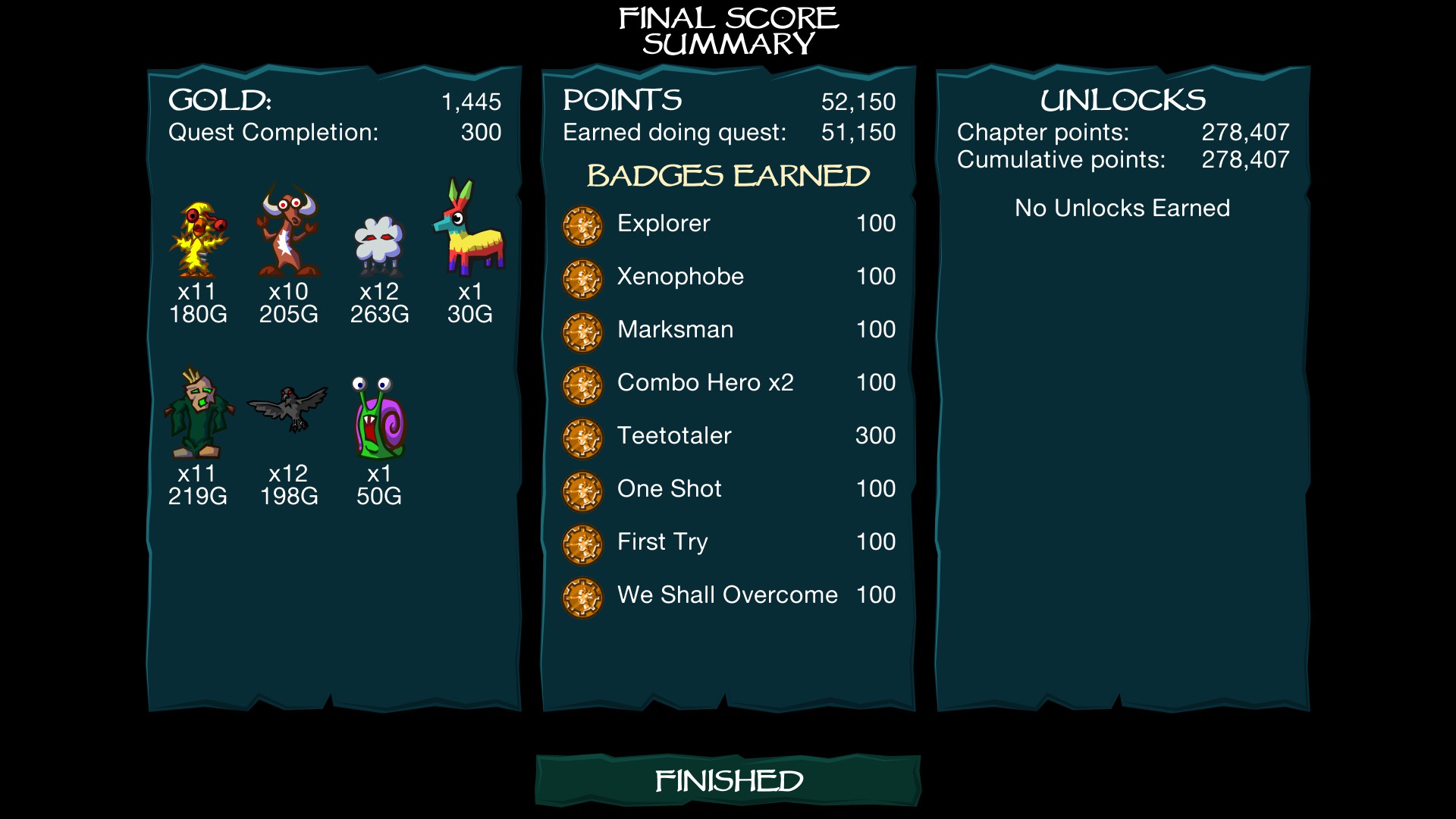