With very few mediocre points in its favor and a massive quantity of points against it, this game should really be an early access title, or rather IT IS an early access in disguise. Do not waste your money and time on this and move along to consider better space games.

Gluon is a space simulation sandbox game with management and building elements. This game is set in the rather distant future, where space colonization has already taken a foothold on many planets. One day, the Imperial forces, for reasons unknown, decided to attack Earth.  They managed to destroy its fleets and successively devastate the planet. You will impersonate Ares, the pilot of a modular transport who happened to be away from Earth when the attack happened. Startled and confused by this sudden imperial attack, you will have to gather your wits together and find a way to rescue people in order to mount a counter-attack against the forces that destroyed your home planet. This game includes exploration, ship building, and resource management elements to create a featurewise space sim, or at least it hopes to achieve that. 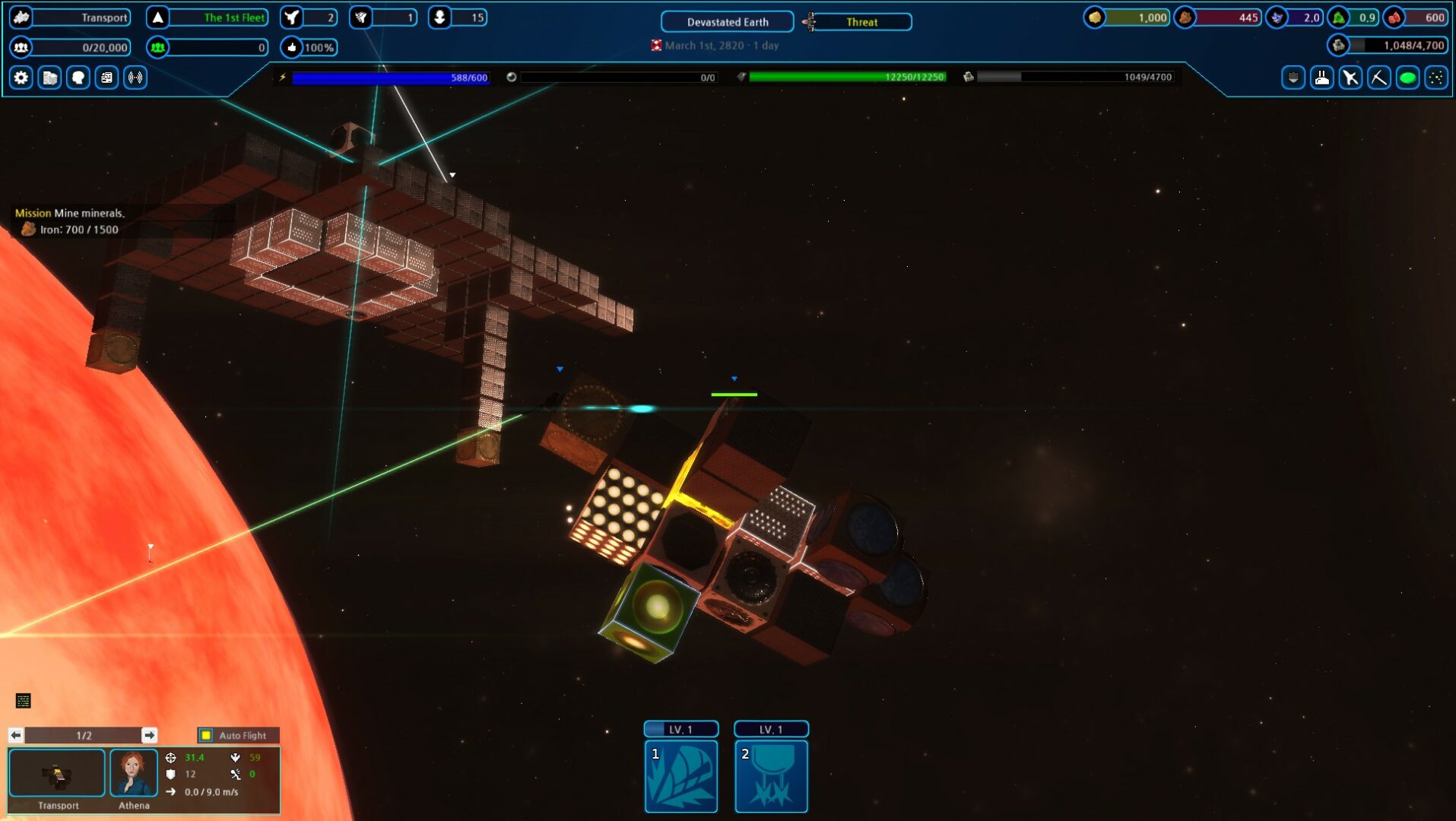 General Gameplay/Combat System
Gluon’s gameplay is divided mainly into three aspects, which are:

Management: You will have to manage a variety of resources and people in order to accomplish your goals to build a fleet. This involves mining asteroids to get metals and rare ores, making deals with space stations to settle your colonists on planets to produce food for the fleet and getting mining licenses or you’ll have troubles. There are honestly many aspects to managing your ship and fleet.  It is too bad all these management operations are run via a very badly designed user interface that will make even the most simple operations very clunky and unintuitive. The game just feels like it came right out of 1998.

Ship Building: Your ship is composed of modular sections of different types, each one can be modified to use a variety of tools. For example, combat sections will be used to host various weapons, while engine ones will be used to, obviously move the ship.  All sections are of a cubical shape and will automatically snap to each other. Each section will have material requirements and requirements of energy to work properly. All this is directed by your command module, an independent cube-ship that can detach from your main vessel at any time, even if for a short while. What I noticed is that shipbuilding is quite buggy especially when it comes to detaching the module.  I personally had to replay the tutorial sequence seven times because each time I detached my command module the ship exploded, all because of bugs. This will happen more often than you think because the ship building system is simply not stable.

Combat: During combat, you have your ship’s weapon and your fighter ships at your disposal. Your ship is the main firepower out there, and fighters will only be good to divert enemy attention from you while you fire at them. Your weapons are automated, as your fighters are, you just have to move the ship around and decide whether or not to retreat. You can select which target to hit but that’s it. Generally, I noticed the combat to be quite slow and clunky. It does not give that sense of involvement that should be there in space combat games.

Content
There are not many planets to explore.  All of them are already charted on your star map so forget about the sense of discovery that is an important part of space exploration games. The campaign will put you through a series of objectives, and there are secondary missions given out at space stations to get some money or resources. Missions are comprised of only a few types and become dull quickly. Contentwise, this game is not very large, especially for being a space sim.  Honestly, it gets uninteresting very soon.  The main culprit, once again, is the clunkiness. 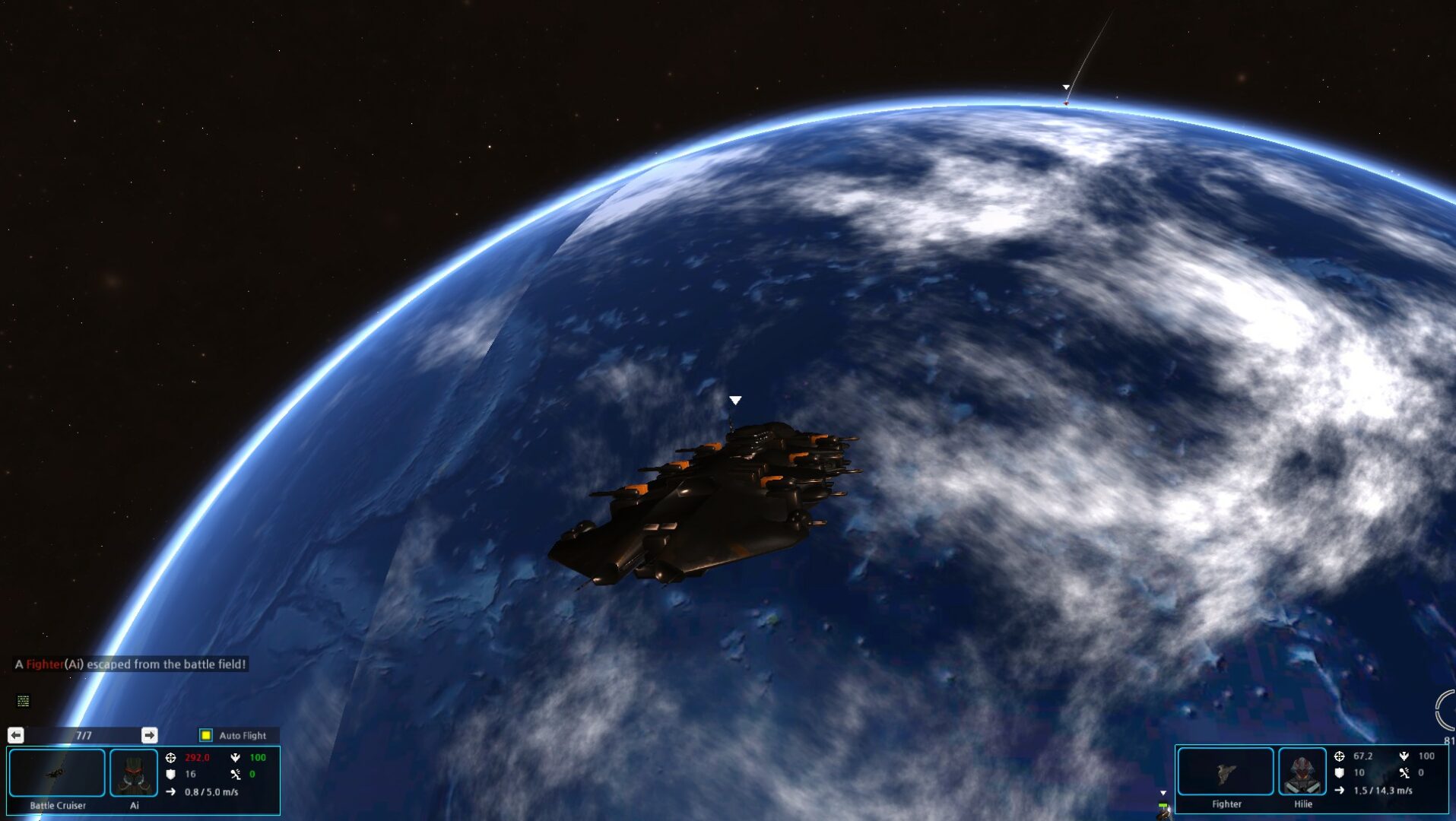 Graphics
In-game graphics are 3D, but I can’t really say anything nice beyond that. Even at maximum settings, there is noticeable aliasing. The textures are low in quality, especially on planets.  Art and color palettes are few and of a forgettable quality or craftmanship. Outer space looks static and dead with no effects or particles to get you that “aliveness” that is typical of space in modern space sims.

Sound
The audio is sufficient when it does not bug out with sound loops running indefinitely until you restart the game. Sadly, this happens quite a lot.

Performance
For the amount of polygons and textures we have in this game, it should run well even on old machines.

Stability
I’ve noted the crashes above.  This is still a major issue for a game that is NOT in early access.

AI
I found the AI to be very basic.  Enemies will try to kill you, but they won’t engage in complex fleet maneuvers like you’d expect.

Game Quality
With all the noted issues, this game is a disastrous disappointment.  The interface and the way menus and actions are designed feels frustrating. Even the most simple of tasks becomes an endless series of pressing buttons and menus. The interface is unintuitive, unresponsive and just uncomfortable.

There is a modding system.  Users can create their own ships using 3D authoring tools like Blender( http://blender.org/ ) and load them into the game.  If you are interested in modding, it is something you can try with tutorials on Youtube under “Gluon modding”.

Bugs / Other Issues
I found the English translation to be terrible and it looked like something made with an automated program.  At least I hope so. The storyline is a stereotype that is boring and uninteresting. Gluon is riddled with minor to medium-severe bugs which take a heavy toll on the enjoyment of the experience.