Killers and Thieves is a new action/management game that lets you manage a thieves’ guild. It’s just a shame it can’t hide all of its faults.

Killers and Thieves is a thieves’ guild management game from Alex Thomas, one of the co-creators of indie hit, The Banner Saga.

In Killers and Thieves you take control of a small group of thieves building a new guild, intent on becoming an underground power in the fictional mediaeval city of Greypool.

The game begins with a nice-looking title screen and a dark, animated graphic-novel style cut scene introducing the protagonists. These set the scene well, and the graphical production values look very high indeed.

The meat of the game is the heist mode, which is played in 2D, from a side-on view, like a traditional platformer. The level details are nice, with a really good atmosphere created by the darkness, weather, and appropriate-looking buildings. But the characters are rather small and look quite basic, with most thieves, citizens, and guards looking very similar. Given the detail that’s been paid to the management screens and the buildings, it seems strange for the characters to be so minimal. 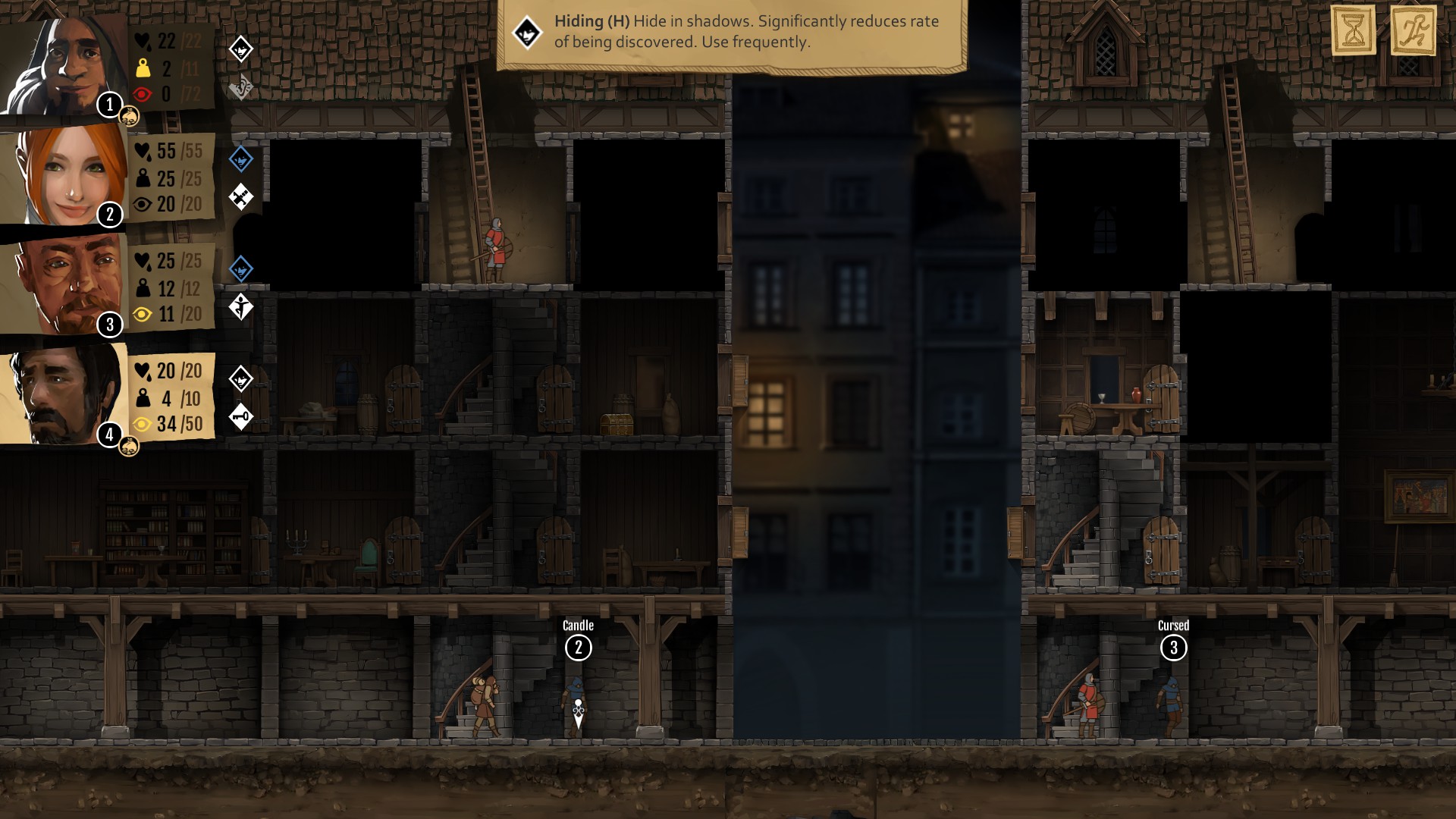 There’s a zoom effect, but the difference between minimum and maximum is small enough for it to be almost pointless.

The management screens are all nicely drawn, with some nice animated touches to the map screens. The management interface is quite easy to use, once you get the hang of it, though a few more tutorial screens wouldn’t have hurt. The heist interface, too, looks quite nice, but is actually rather hard to use, given the pacing of this part of the game.

The game has mostly good music that fits each part well. The introductory music is dark and foreboding, like the scene itself. The heist music, though quite a repetitive sort of riff, also fits the action well, with a sort of progressive feel to it. The safe house and management screen music is more mellow, but also fits the style of game well.

Sound effects are very limited, and essentially amount to guards saying “Hmmm” loudly, and lots of swishing and metal clashing sounds when you end up in combat. They’re a bit disappointing, really. But the rain sounds nice.

The game has some voice work in the cut scenes. Candle’s voice is lovely and fits her profile picture very well. 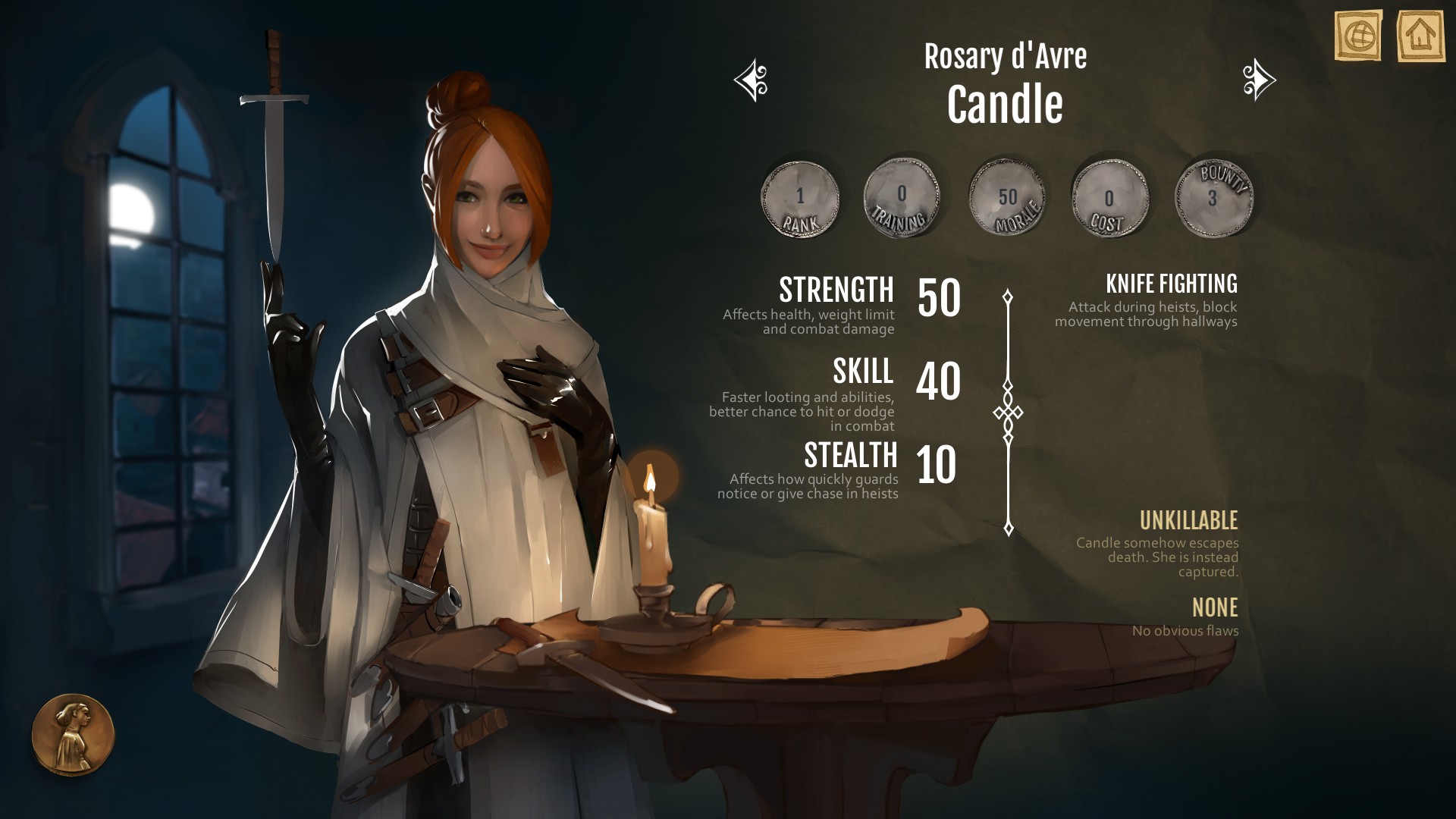 The game has two modes: management and heists. The management mode is all essentially turn based, with no time limits hurrying your movements or limiting your options. The game measures time in days, with certain actions or missions taking a set number of days, and expenses requiring payment on a weekly basis. The focus here tends to be on maximising the use of your thieves so they don’t sit around idle for too long.

In this mode you manage your guild from your safe house in the Patron Tavern, with training, recruitment, sales of loot, stakeouts, and various side- and story- missions being available at different times. Your guild grows as you hire more members, but the heists can usually only be completed with a maximum of four thieves at a time, so choose your training wisely.

The heist mode is the action part of the game, where you take your chosen thieves into Greypool to steal from the unwary (or kill them, if you prefer). This is played in real time, and is quite fast paced — and unfortunately, rather hard to control.

Each thief has certain abilities that allow him or her to perform different actions, such as picking locks or fighting. But the core of the heists is the stealth mechanic: each thief has a set number of suspicion points, which reduce when citizens or guards see you inside buildings, or drop to zero instantly when you enter combat. These points never recover inside a heist, so if one lowly peasant in a quiet room at one end of the map sees you robbing a chest, then every guard on the map instantly knows you’re up to no good. 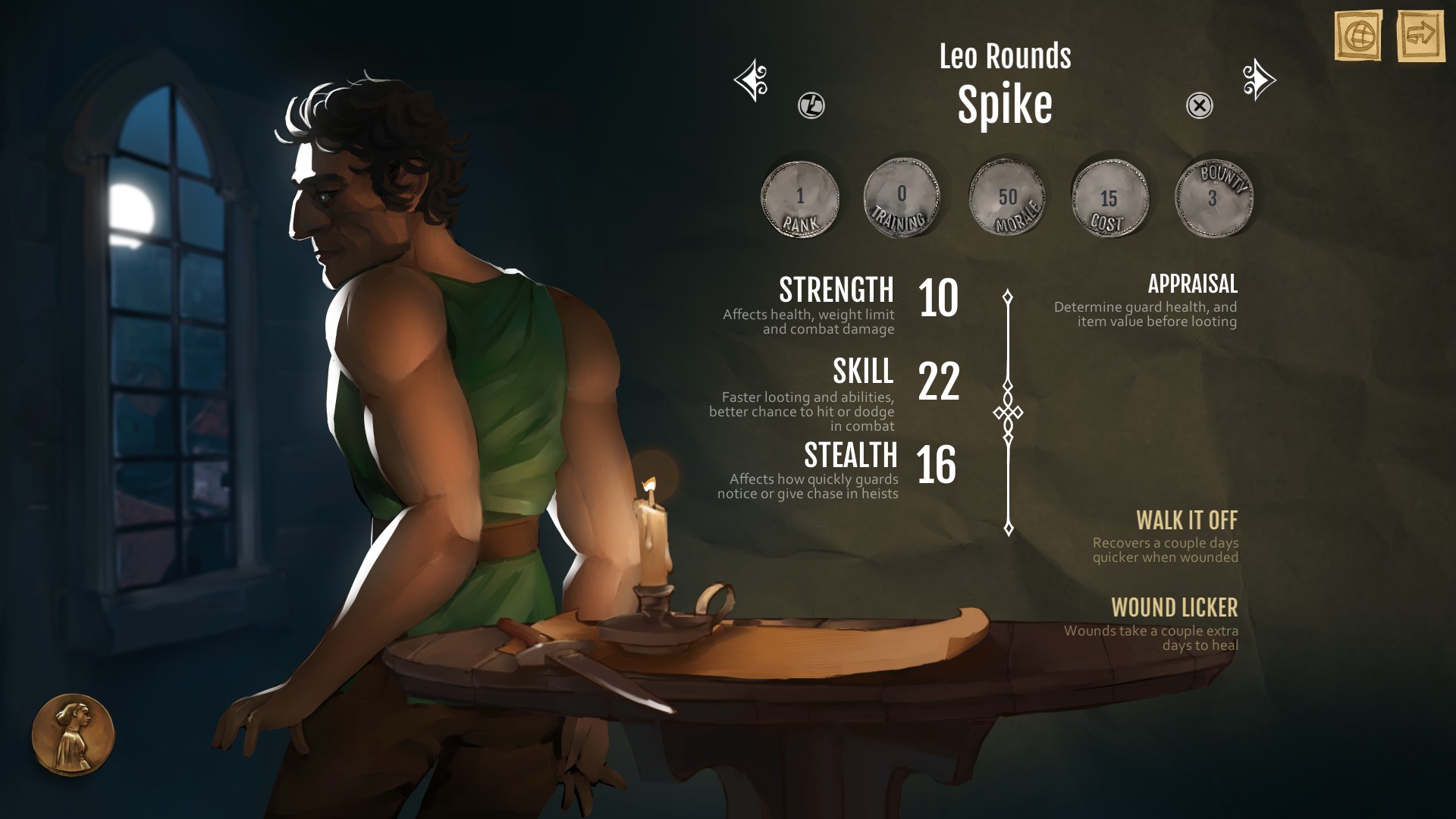 Combat itself is very basic, and rather boring. Only thieves with the knife fighting ability can fight, which effectively involves drawing your knife and swinging repeatedly at your attacker. It seems to be very strongly based on luck, with some guards dropping like flies and others being invincible tanks. Apart from the too-basic nature of these fights, there are also two big problems with them: once you start, you can’t stop: you either win, die, or are captured; and as soon as a guard sees your knife, your stealth instantly drops to zero for the rest of the heist, even if you drop him without anyone else seeing you.

Each heist is essentially an exercise in minimising attrition. Stealth points continually drop when people see you, until they hit zero and every guard on the map tries to capture or kill you. Hit points are reduced with each combat. And even your inventory space decreases with each item picked up. None of these values can be recovered during a heist, so when your stealth is gone, your hit points are gone, or you have no room left, it’s time to escape. If you can.

For some reason, a thief peering through a keyhole can see everything in the room, no matter how large or small, except for whether any other doors in the room are open or closed. Even if a door is five steps away directly across the room, you still can’t tell whether it’s open or closed until you open the door. So you open the door, the probabilities collapse, and Schrodinger’s Door is revealed to you — most often open and providing clear line of sight for a guard looking right at you. 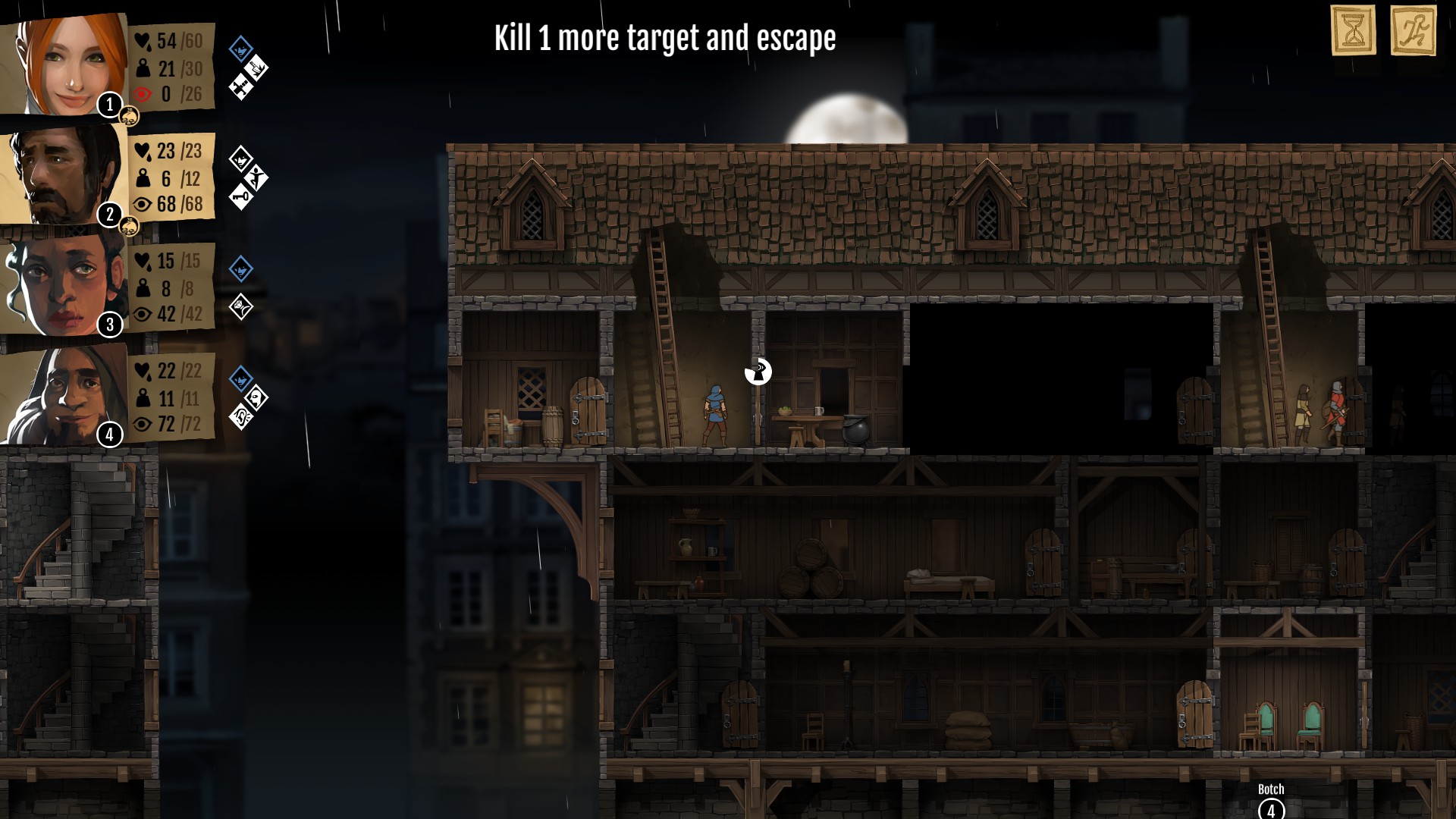 Line of sight matters — a lot — and having doorways through which you can’t see when using the keyholes puts you at a distinct disadvantage, especially since guards can see you across half the map if you happen to leave a stray window open. Not only is this keyhole issue illogical and frustrating, but not being able to tell whether anyone will see you as soon as you open a door turns a game that should be a game of skill into a game of luck. Couple that with the broken stealth mechanic and the guards being telepathically linked to one another, and it’s far more frustrating than fun.

Other issues that I found frustrating were many: controls that are very hard to use, guards that spawn in already-cleared areas, no mid-mission saving, broken pathing, activities taking longer than they should, and buildings that just don’t make any sense. The list goes on.

This last issue is probably worth describing further, too. Each mission has a number of buildings, but they’re just a collection of rooms with no logic behind them: bedrooms, empty closet-like rooms, studies … there’s no obvious structure or purpose to any of the building layouts or contents, and no explanation as to why citizens are happy to have guards aimlessly wandering through their bedrooms at night. Though the city graphics are very nice and the graphical detail is good, this lack of cohesion makes it all feel rather random and pointless.

Finally, there seems to be a game-breaking bug where your save can be discarded if the game doesn’t exit properly, or that’s the way it seems. I killed the game from the taskbar and when I restarted again, ‘Continue’ took me back to just after the opening practice mission, losing hours of progress.

I really wanted to love Killers and Thieves. But after only a handful of hours I’m already too frustrated with it to want to start again. With work on the stealth mechanic, guard telepathy, combat, line of sight, and pathing, it could be a great game. But there’s a fair bit of work to be done.