Day of Infamy is a multiplayer first-person shooter set in World War 2, but is its focus on realism and teamwork a good thing?

Day of Infamy is a realistic World War 2 FPS in which teamwork is essential to fulfill goals, which change depending on what game mode or map is in play. While one may think it is just another run-of-the-mill FPS, the game has a rare focus that separates it from the rest of the crowd.

Experienced FPS gamers might find themselves with a familiar feeling when they first play Day of Infamy. This is no coincidence; the game is developed by the company behind the highly popular Insurgency tactical FPS, in which players fight in PvP or PvE servers. Insurgency is known for its heavy focus on teamwork, forcing players to act like a team, think like a team, and remember that they aren’t superheroes. To further clarify the importance of teamwork in Insurgency matches, I quote “Leif Johnson”, one of PCGamer’s reviewers: “Your teammates, in essence, become your hit points.”

Day of Infamy is no different in this regard.

New World Interactive brought together everything they learned with Insurgency to create Day of Infamy. Gamers now have access to airstrikes, in-game regiments, and improved sound effects and graphics. The different era doesn’t come without losses to the brave warriors at the front, as there is no armor available at all. Being shot is a death warrant.

Players can fight in matches ranging from eight players to great battles in which up to 32 people engage in close-quarters combat. And, just like in Insurgency, it is possible to take part in battles against bots, where teams must capture objectives as quickly as possible to receive more “team tickets”, allowing dead teammates to respawn back to life.

Teamwork and classes? Explain this, please!

Gamers cannot pick any weapon they wish on the go. Instead, there are multiple classes with different weapon loadouts, from the cannon-fodder jack-of-all-trades Rifleman to the Officer class, the only class allowed to call airstrikes and use other airborne abilities.

Each class features its own weapons suitable for its work. For example, the Assault class gets shotguns and cheap grenades for close quarters, while the Support class has a heavier gun to lay down suppressing fire from a longer distance. Players that try to play on their own will find themselves unable to play efficiently, regardless of their choice of class. The Officer class is a mere “gourmet” assault class unless a Radioman is nearby, allowing for powerful ordinance to be used — such as the loud and scary Stuka. By the way, hearing the Stuka is a signal of imminent doom. It penetrates buildings and kills holed-up troops.

All classes have to work together to achieve a single goal. The Officer simply isn’t combat efficient without a Radioman, and the Radioman requires cover, which is laid down by the Support lass, who then needs protection by a Sniper whose role is to pick valuable targets from afar… 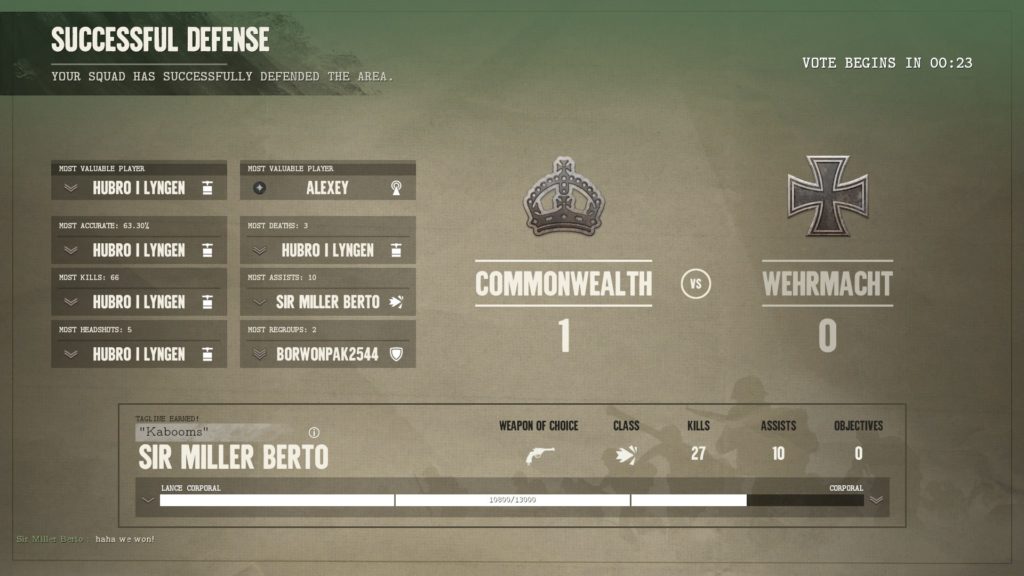 I played this game back in its alpha period in October 2016, but was unable to gain much progress due to a hardware issue. There were fewer players back then, but there was little trouble finding servers to enjoy a good match. After playing regularly from late January to March, clocking over 34 hours so far, finding servers still gives me no issues at all.

According to SteamCharts, there were on average about 295 players in February, an already impressive number for an Early Access FPS that tends towards a realistic niche. By its full release in March, the game had an incredible increase of 44.96% in its player base and then another 40.8% increase in early April 2017. Gamers should now have no trouble whatsoever finding playable matches any time of the day. Even if somehow there are no players to take part in a big battle, there is always a cooperative mode against A.I where solo play is possible. However, solo gameplay has to be downplayed because Day of Infamy is much more fun with friends.

The multiplayer community is mature and I have never seen any sort of chat harassment in my time in game. In fact, it’s not uncommon for a dead adversary to compliment his or her killer’s marksmanship; I’ve seen it happen a couple of times on smaller regiment servers. Regiments usually have their own servers where players that have known each other for a while play together. There are also public servers. Using the quick join picks a match automatically, tending to insert players in official servers instead of community ones.

As with all games based on the Source Engine, and, in fact, almost any multiplayer FPS, the delay (ping) is important. While 100 ms may not seem like much, it has an impact in the quality of a match, so try to play on servers close to you where possible.

Great! I like what I hear. But what about combat? 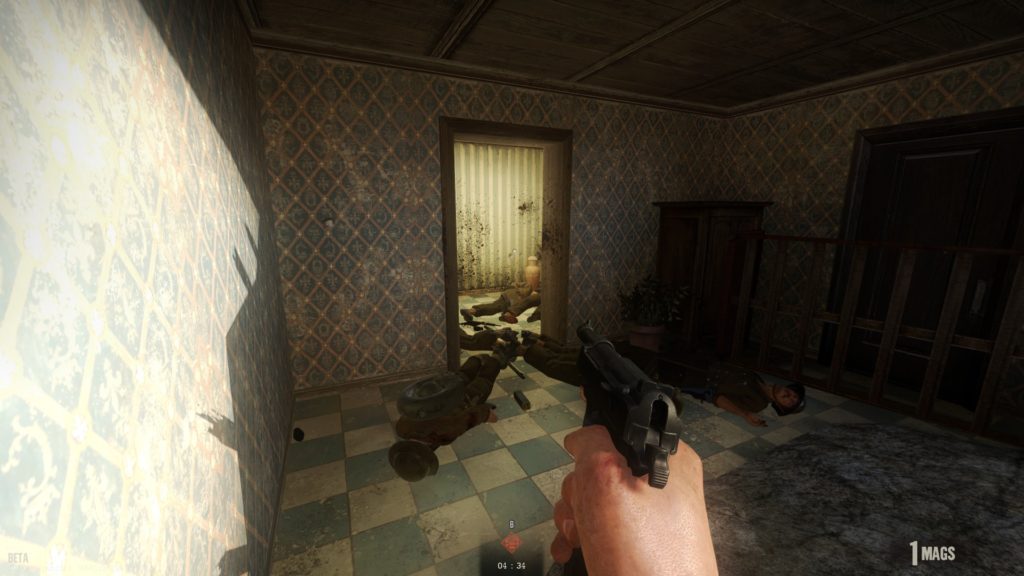 As mentioned above, combat is truly dangerous and one should only engage if one can actually put up a fight. Range, recoil, bullet fall, and, most importantly, noise, act against whoever attempts to end an adversary’s life online. The best weapon at a gamer’s disposal is the noise. Walking is very loud and alerts nearby players to a trespasser, who can often be shot to death with very little effort. Being stealthy while raiding a position is vital to score a kill or capture an objective.

During online PvP games, even inexperienced players will be able to enjoy themselves, as all weapons are available and there are no XP locks or paywalls. Just enter a match, pick what’s needed, and remove what’s unnecessary in order to free up requisition points. These do not accumulate and once the match is over, resources are reset to default, giving everyone a fair chance to play with the best weaponry, while keeping the game balanced.

I find playing PvE in most games is on par with utter boredom. Day of Infamy handles AI very well, though it may not be especially smart or capable of making wise decisions, or implementing complex strategies. The AI will defend its objective by any means possible. The developers use the fragility of the human-controlled characters to their favor to balance the matches, followed by the fact that the AI has a huge respawning army under its grasp, controlling and balancing the advantage human players have over their metal counterparts.

Killing PvE enemies isn’t hard; they die easily. But they can distribute a hail of lead into their enemies, and gamers must approach AI carefully if they want to survive. As players proceed further into the map, the enemy troops may start a counterattack marked by a sudden siren.

That’s all nice to know, but is it worth my time?

For gamers in search of a realistic World War 2 shooter with a strong emphasis on teamwork, sound, and other in-game atmospheric details, which keep the fun factor alive, this is a must buy. If you are looking for a game to play now and then with friends, or just a game in which gameplay feels rewarding after a long day of work, I also strongly recommend this game. Day of Infamy does everything it promises well, providing an immersive atmosphere for both hardcore gamers who wish for a realistic experience and inexperienced players willing to jump in and enjoy a heavily teamwork-focused video game.