Deformers is the cutest arena shooter I have ever seen.

Deformers proposes to pit cute little furballs and slimeballs in a small arena where they fight to the death using anything at their disposal, from their own malleable bodies to deadly power-ups. The critters do not walk, they jump and roll meaning that the controls are a bit different from what we are used to experience. 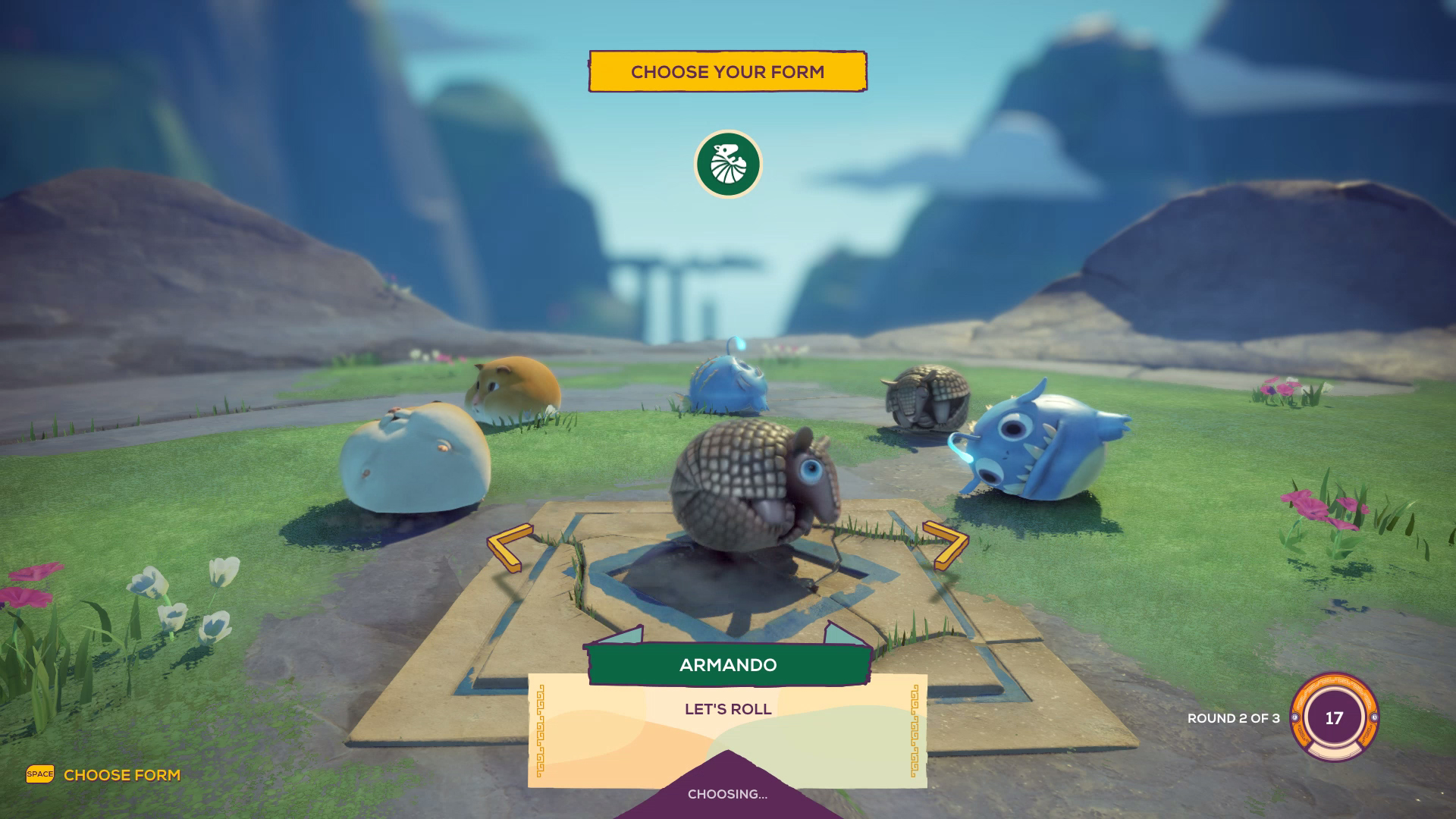 Ready At Dawn, the developers, are also known for The Order: 1886 on PlayStation 4, and from this will come some strengths and weaknesses of Deformers. Let’s start with the positive: the game is gorgeous and certainly looks like it comes from a studio experienced in AAA releases. The music is great, the quality of the graphics would easily be confused with an animation movie, and the art design is top notch. The cute little beasties are very endearing and goofy in a good way, with simple screenshots leaving me awestruck. In addition to the fact that, as you might guess from the name of the game, the critters can form and deform on impact and the magic of the animation is even more striking when they switch to a “block” position, an inflated squarish form to repel attacks. The squishy physics of this game are a blast. 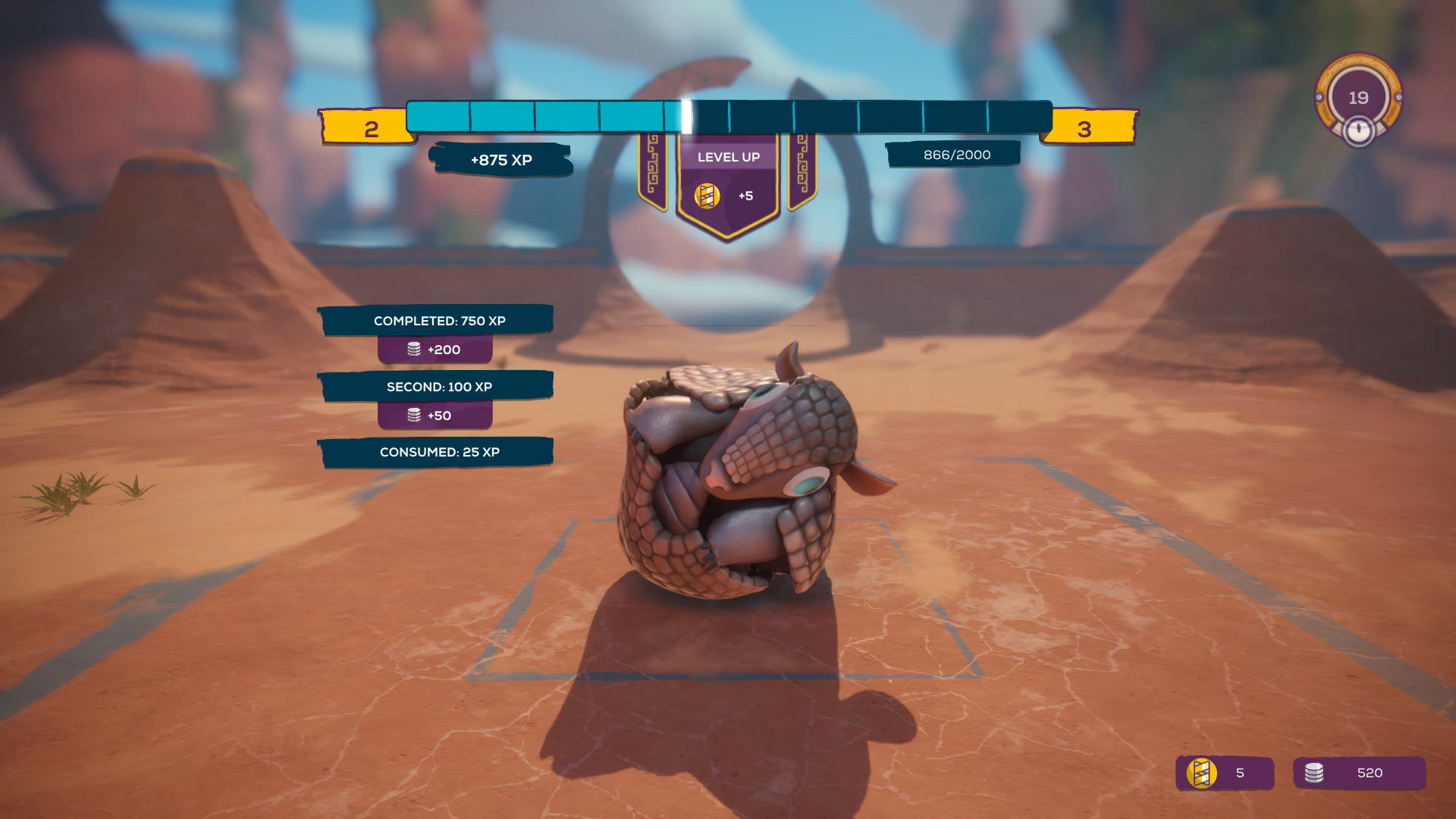 The tools of destruction are numerous. There is a basic ranged attack, similar to a machine-gun. Ammo can be found aplenty by destroying crates. There is a charged dash, that can deal damages while pushing an enemy out of the bounds of the map. There is a “block” to hurt a charging enemy. There is a grab, to hold someone prisoner and throw them over the edge. Additionally, there are various power-ups that range from mines to invisibility. There is no in-game tutorial, you have to learn all of this from a few YouTube videos accessed from the in-game menu called “University”. 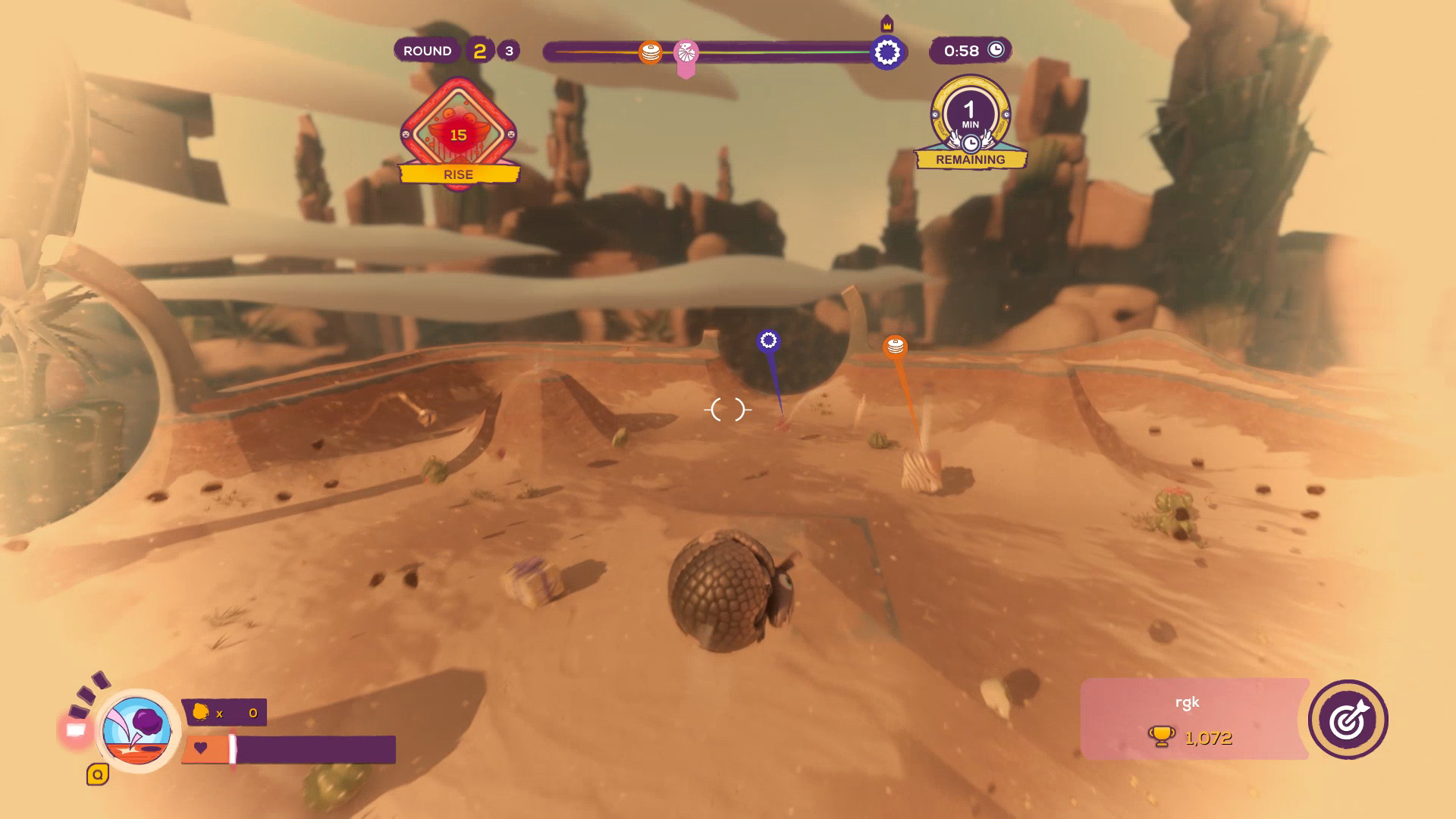 The maps are well designed, small arenas with ramps and verticality. At times to times, a disaster strikes and can tilt the arena or remove all gravity. With the unique controls, the small arenas and the power-ups, I was reminded of the Battle Mode of Mario Kart. However, Deformers is much more mobile and nervous, and its gameplay has a large skill ceiling due to all the possibilities and the quick manoeuvers required. All the required elements for an arena shooter are here, including great controls (coming from someone who usually dislikes Third-Person Shooters – I had no grief with Deformers) and a complete menu for key rebinding (the game works fine either with a controller or mouse & keyboard) and graphic options. In terms of game modes, there are the classic Deathmatch and Team Deathmatch, with the welcome addition of a football mode similar to Rocket League. The latter plays quite differently, as in Deformers you can gun down your opponent or directly grab the ball. 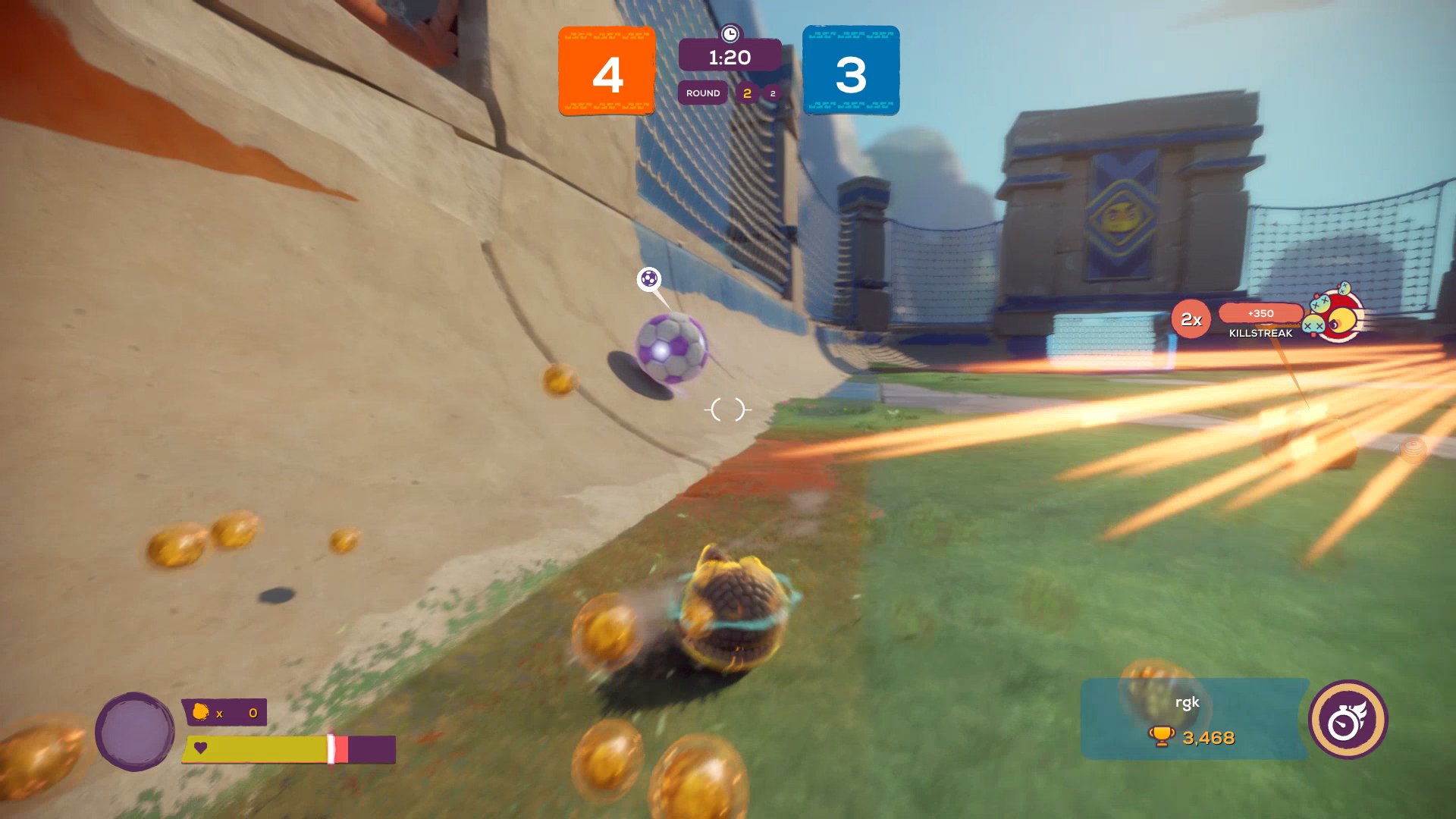 SHUT UP AND TAKE MY MONEY – No.

Finishing a game earns points, they can be used to buy new “Forms” or cosmetic items for them. Although there is no impact on gameplay, this is where things start to get ugly. There are in-game microtransactions, or more like macrotransactions because it ranges from $3 (about one “Form”) to $20 (about ten “Forms”). What a bargain! On top of an almost given $30 game. It seems like for this game the price can inflate much more than the critters… When I attempt to justify this price in my head, the only plausible story that I can come up with is the simultaneous release on Xbox One and PlayStation 4. The consoles already have a history of overcharging consumers, so it might not be the fault of the developers, but whoever decided of the pricing should have checked the Steam market and priced accordingly. My favorite indie arena shooter Robot Roller-Derby Disco Dodgeball is struggling to build a player-base with a $10 price. So what does the Deformers player-base looks like? An incredible peak of 80 players on release, then a struggling 20 maximum concurrent players on the next days, already dwindling to less than 10 after a week. This sadly seems to be the fate of most indie multi-player games that are not a crafting survival open-world game. Finally, it would be nice to have a list of games that are being played or people who are waiting rather than a match-making system. 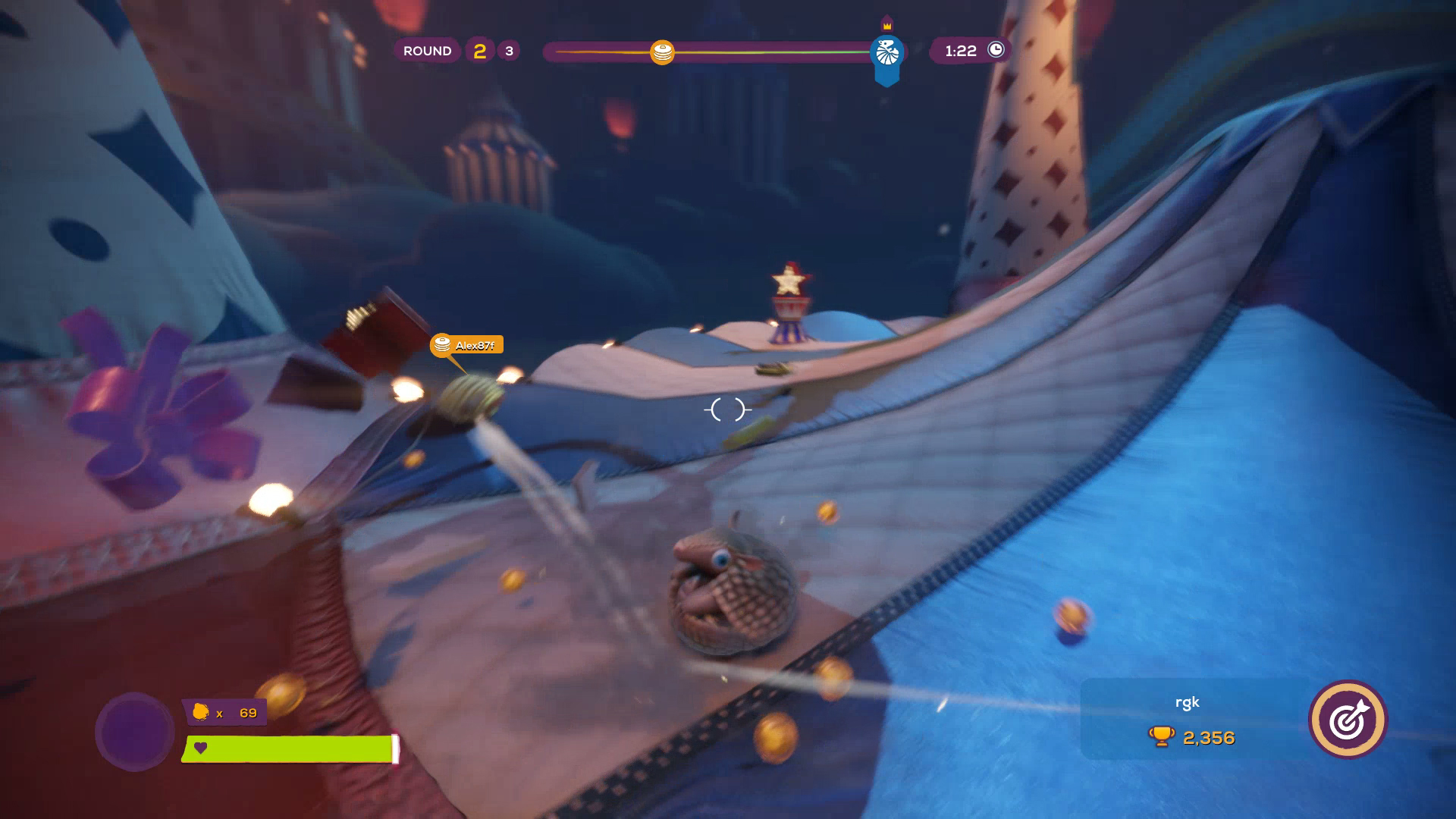 There is a disturbing dichotomy between the content of the game (another doomed small indie-like multiplayer game like we see so many) and its pricing (as close to an AAA game as can get) adding insult to injury with expensive microtransactions. Why would you invest so much money in a game without a player-base? The cute critters are adorable, but is that enough to sell our souls? Well, probably not. The game-mechanics are solid and very well-rounded with enough room for both fun with friends and high-skill maneuvers, but perhaps a solid single-player would have been necessary to sell the package at such a price. Or eventually a move to free-to-play, but even that would not be a guarantee for success as the market is ultra-competitive and crafting/survival open-world games completely dominate it and crush to oblivion the fun little games like Deformers – even though this time even the package coating the product was delicious.