The Great Settlers of China

I miss The Settlers II. While the rest of The Settlers series has found its own audience, I never really liked the later episodes. Sure there has always been that central core of supply and demand, or in other terms, very lively resource management games in which one resource can only be obtained by spending or refining another one. However, all the latter games have removed what was to me the most gratifying part of The Settlers II: the road network and an elegant way to control the flow of resources from one location of the colony to the other. While Widelands scratches the itch of a Settlers II replacement, it is just too ugly. A very important part of these games, in my opinion, is to be pleasing to the eye so the player can admire the little ant colony that they have set in motion. So, when I was browsing Steam and Building the Great Wall of China 2 appeared, the screenshots instantly reminded me of the 2D Settlers games… and roads were displayed. I love my roads (except in WarCraft I, those were an annoyance). That was enough to interest me and I jumped in.

The Great Price of the Wall

Before going any further, there is an elephant in the room: the game looks like it is for free on Steam, but this is actually just the first chapter or a demo. BtGWoC2 takes its roots in mobile gaming, and it shows. If you want the full game, you are looking at the “DLC” Collector’s Edition for $13.99 – almost double the price on mobile. On one hand, hey, there is a demo and you can get a taste of the game very easily. On the other hand, that high price for a game from the mobile market is a red flag putting off many buyers, and the number one reason for the negative reviews that this game is receiving on Steam. I completely agree, the pricing is unfortunate and would have caused less resistance if it was aligned on the price on mobile (and it already is quite expensive on the mobile market). However, the rest of this review until the conclusion will be about judging the game on its own merits, so we will leave the price aside for the time being. 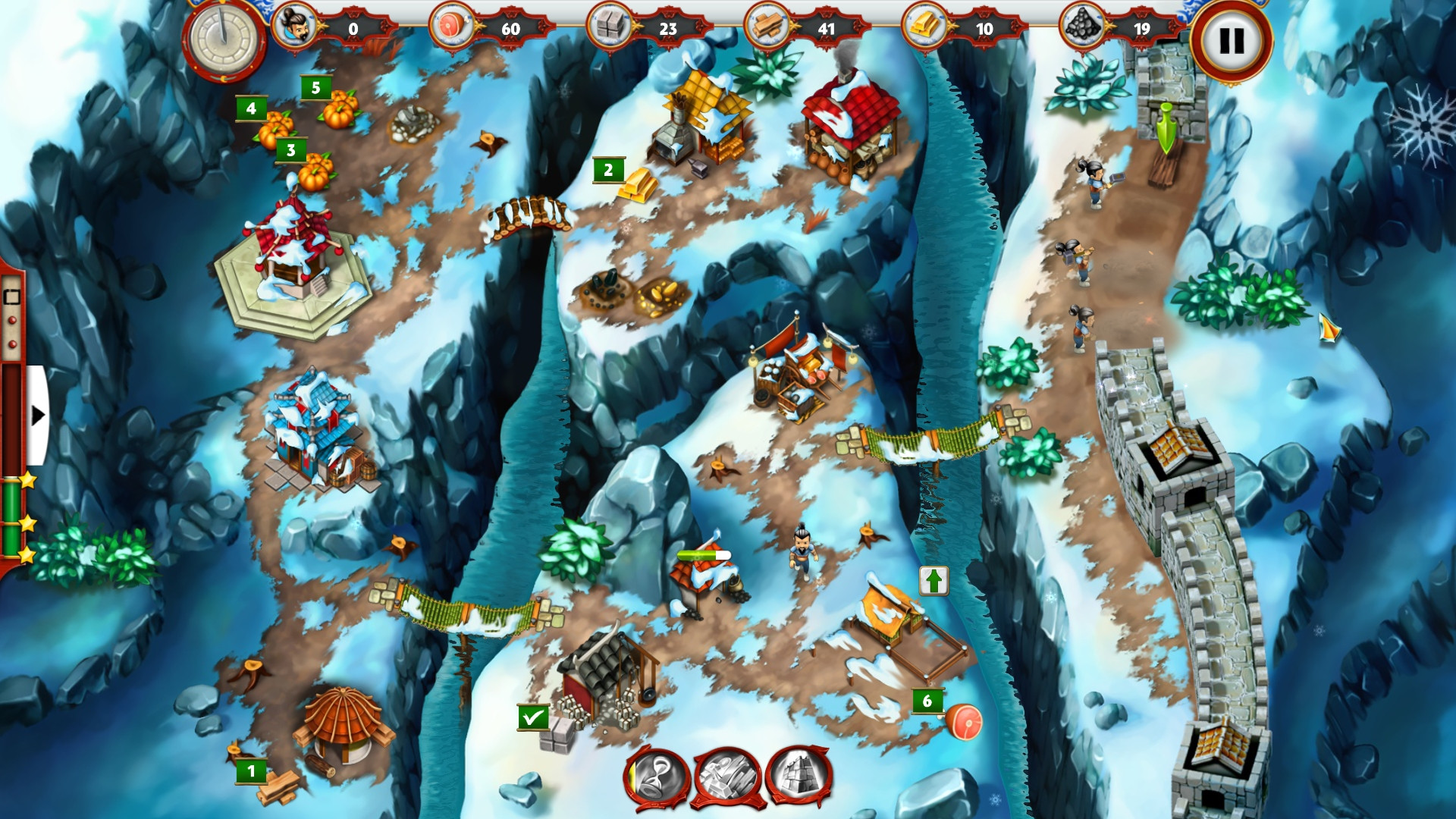 As its name suggests, the story of BtGWoC2 involves gathering enough resources to build the wall, level after level. The story is almost non-existent, you are basically doing this because you are a good lad caring for the good of the people. I mean, every single person that proposed to build a big wall has always been a saint, right? Despite the lack of plot, the cut-scenes are very well-drawn and even have some animation. Overkill! The beauty of the hand-drawn graphics is also present in the game itself (admit it, you find those screenshots beautiful) and the eye-candy that is a mandatory requirement to make these games work is absolutely spot on here. Complete the picture with great relaxing oriental music, and this is a very pleasant game to launch and spend a few moments with.

The Ant and the Grasshopper

A few moments? You are going to spend a lot more, because it’s quite addictive. Despite being simple and casual, this game managed to keep me engaged. Let me explain a little how this works. You have your main hut, or headquarters, or lair, or torture dungeon, or shelter under the bridge – whatever you call your home, I am not judging. From there, your little worker is ready to grab resources and bring them back home for storage. You might want to use the food in exchange for chopping some trees and get some wood, to build a farmhouse. Once you get a more steady supply of food (the game has the good taste to renew the wild crops of food), you build and improve a sawmill to get some planks and improve the next buildings. Overall, you want a steady supply of the different resources that will be necessary to clean up the rubble and build that costly wall. 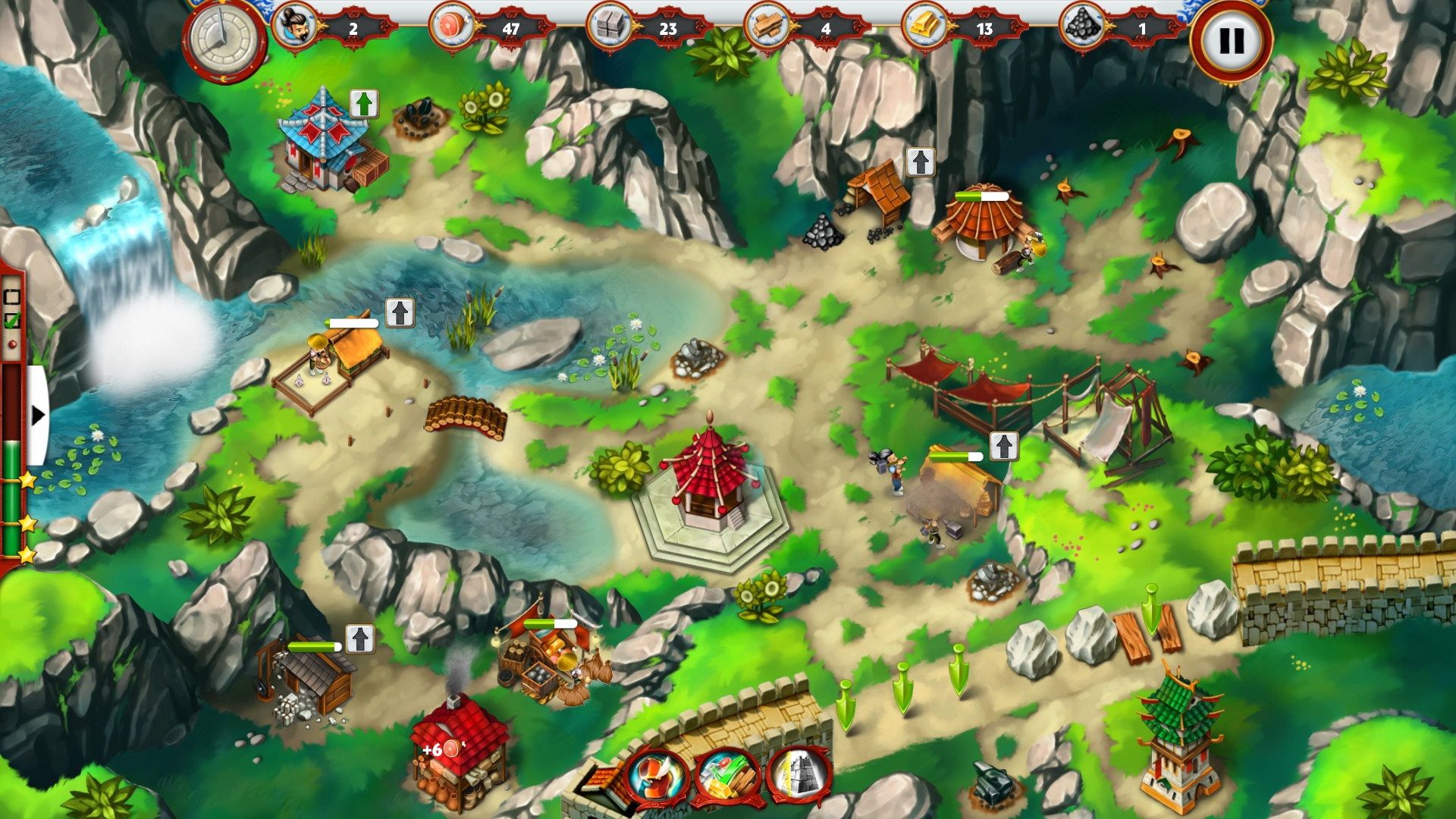 Unlike The Settlers, here none of the workers are automated. They only go on the resources that you tap, and towards the buildings that you want to build on already existing foundations. This is a mechanic that stems from the mobile game, so for a moment I was really afraid that this would be a clicker game in which you turn your brain off and just keep clicking on the screen like a madman. While you might eventually end up clicking on the screen like a madman, this is not how this game feels at all. First off, you can corner yourself into not having enough resources if you don’t keep track of what you are doing. Secondly, the whole gist of the game is for you to constantly prioritize your actions. Build a sawmill first, or a farmhouse? A quarry or a gold mine? Grab the food first, or that gold far away? While The Settlers was about micro-managing a colony, BtGWoC2 is about micro-managing the micro-management of a colony. Your brain is constantly led to think of the next course of events, and the frequent stream of resources keeps you busy in between two bigger decisions. As a consequence, the game is always engaging and does not let you get bored. Building the Great Wall of China 2 reached that subtle good flow that so many games attempt to accomplish but only a rare few succeed in doing. I did not expect as much from a casual game!

You might wonder if doing the same thing level after level does not get old. And that’s actually where the game impressed me again: each level has a unique layout, forcing different courses of action and decisions – and there are MANY levels. The little workers follow the roads, and some paths are longer than others, some are blocked and a bridge needs to be built, and so on. This means that each level requires for the player to think slightly different to deal with the new layout, and prioritize accordingly. Another layer of the game is the accumulation of a fixed number of resources in a caravan, those resources being available at the start of the next mission. So, for a speed boost, in parallel from building the wall, the player can supply this caravan. 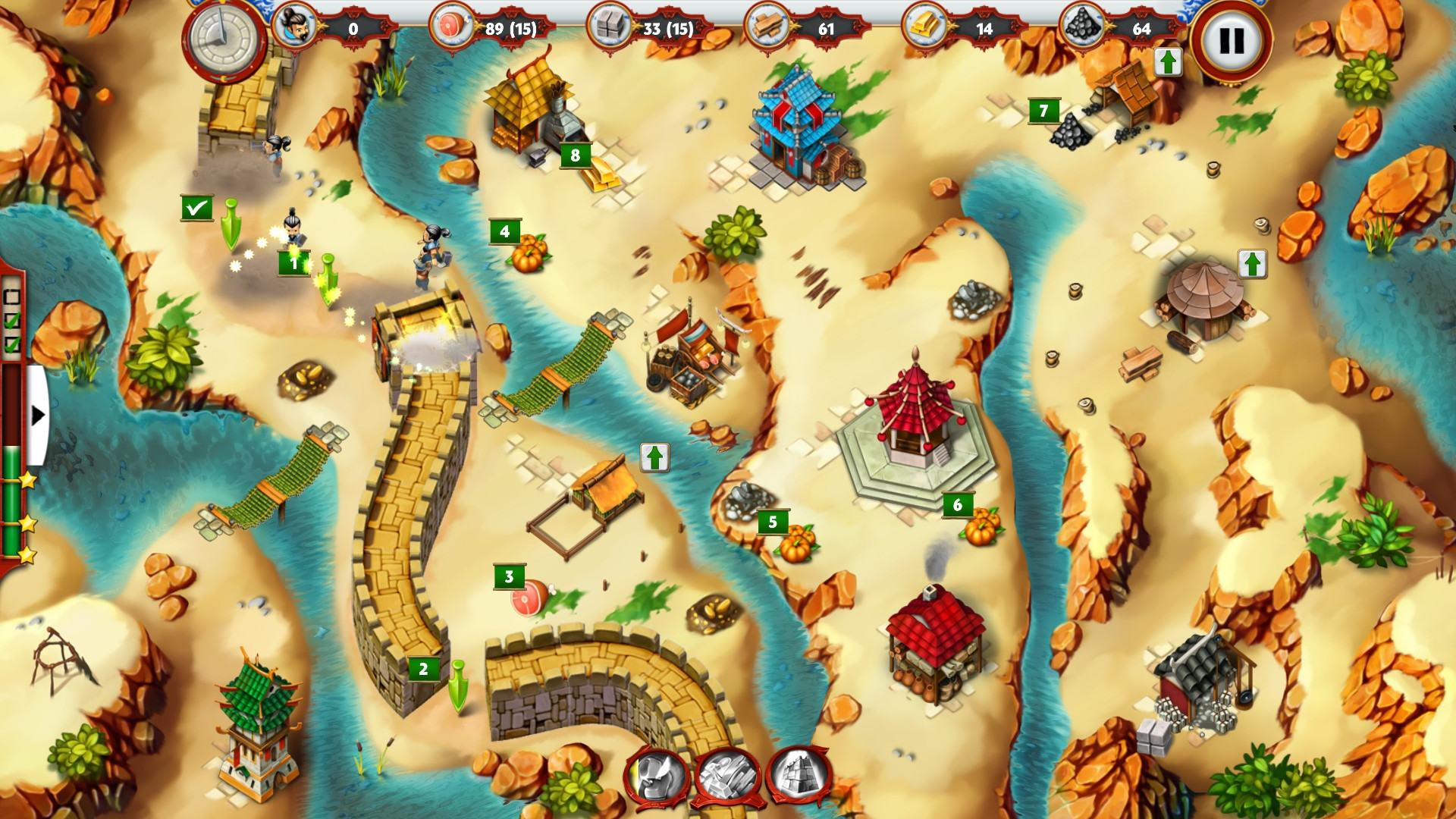 Another heritage from the mobile games is the 3-star system. In general, I have a contradictory feeling about those: I don’t like to be pressured, and yet I am very competitive and will try to get a perfect score every time I play. I thought that this may really clash with my idea that this resource management game should be relaxing. Well, I am happy to report that I still managed to feel at peace while playing this. The system is not very intrusive, gives a lot of lee-way, and ends up being the necessary challenge to not just wait lazily but rather optimize the level as efficiently as possible while loading up the caravan to get a head start on the next level. It really ties together quite well, and allows this game to slightly break the label of casual towards the later levels. At some point, getting 3 stars really requires to aptly use the magic powers that the game eventually unlocks. Some are as basic as freezing the timer or making the workers faster, some others have a more subtle and potentially powerful effect needing to be used at an opportune moment. Another layer to think about, the game gives more of a strategic challenge for those that seek it while letting the slower players just enjoy the game at their rhythm. Overall, I would say that the time to complete the game is five to eight hours according to your speed. 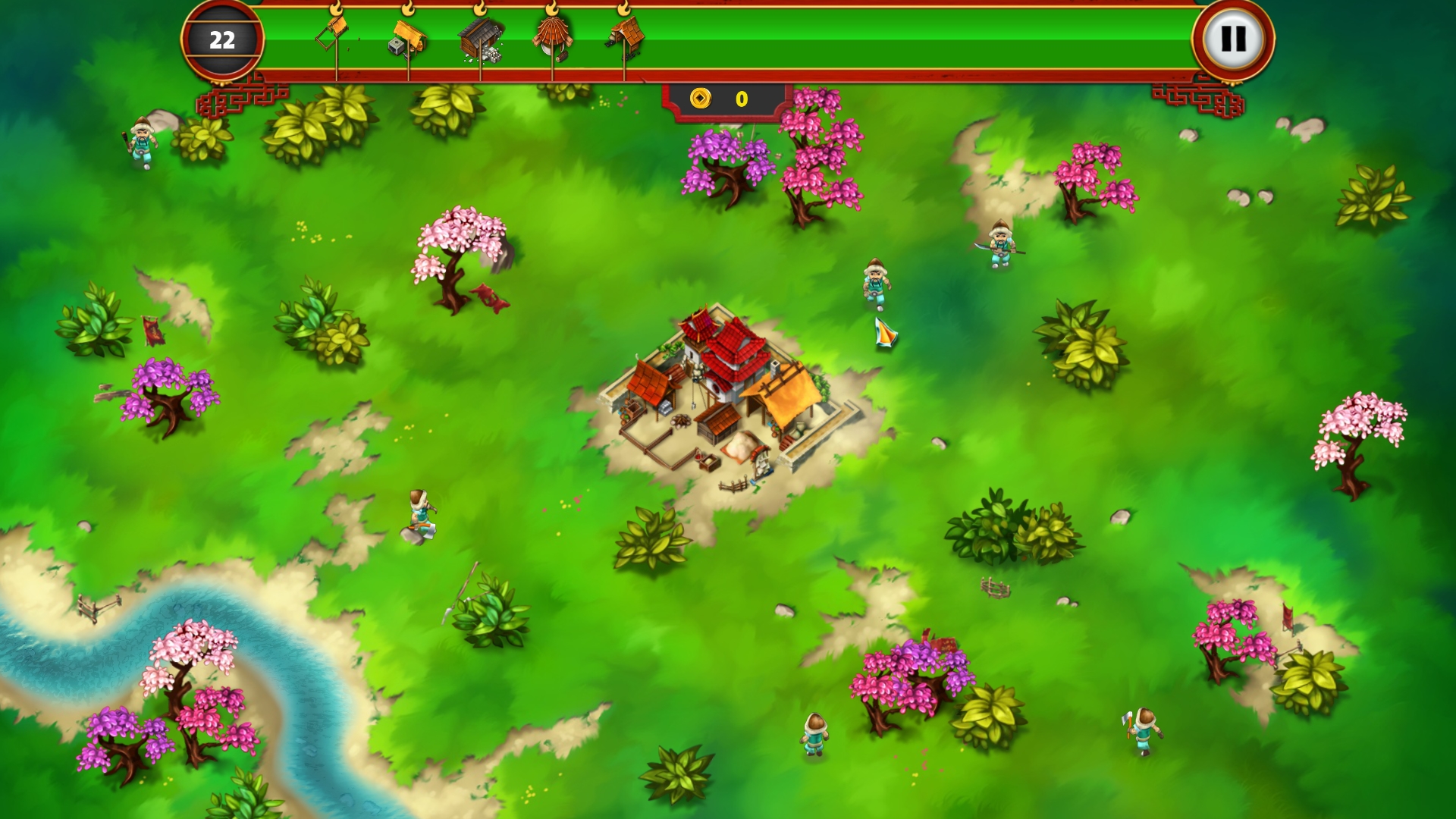 There are a few false notes, some merely technical such as having in-game achievements but not Steam achievements, and no saves in the Steam Cloud. A bigger false note is the combat system, something I have not mentioned before. During some levels, enemy troops will occasionally appear on the map, rapidly setting fire to a building owned by the player. The counter to that is to build a fort, and when the enemy attacks it triggers a mini-game. This mini-game consists of clicking on many enemies attacking the colony, about a hundred within a minute. While the health bar is really large and the threat is minimal, the feeling of urgency is at odds with the rest of the game, and clicking with the mouse like a rabid machine-gun is in no way as satisfying as tapping with a finger on the screen of a phone. Sometimes I was even tempted to not build a fort and let the bandits burn my buildings because it was more relaxing and less annoying than clicking like a kid that fell in a coffee cauldron. Still, even if I did not like this part of the game, it does not happen on every single level and thus did not impede my enjoyment overall. However, I could not help but feel that if the game was slightly more ambitious and closer to the early Settlers in terms of scale and scope with a new spin related to the Wall, it could have pulled out of its mobile shackles and become a great PC title. 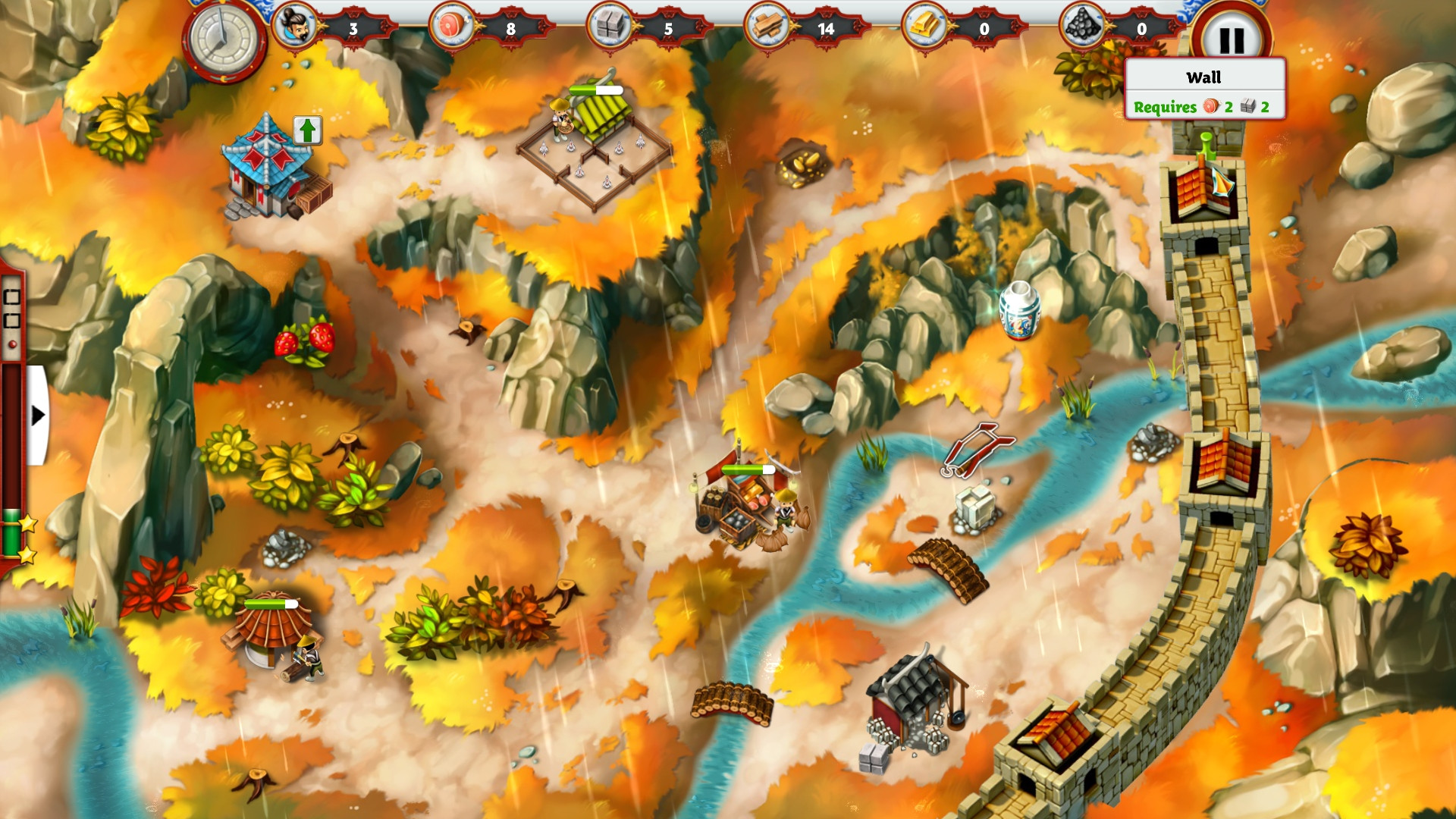 Building the Great Wall of China 2 surprised me. Non-content with being gorgeous and having beautiful music, the gameplay flows amazingly well, straddling the line between relaxation and intellectually engaging. There are constantly resources to allocate according to a plan that the player decides slightly different on each level, while the stream of resources to collect doesn’t leave a dull moment. The pleasure seeing the ant colony in movement is even greater as you are the ant worker and the queen at the same time! I see this game as a Settlers-lite experience, and thoroughly enjoyed my time with it despite the annoying combat mini-game that does not fit on PC. If you would like a very well done casual strategy game for quick enjoyable sessions and still maintain longevity, this game is right up your alley. Definitely a Save… but a Save for Later, such as during a sale. In the meantime, you can quickly fire up the demo and have a good time with a small bite of the game! I would love to see a more ambitious Settlers-like on PC from that team and that gorgeous 2D style.