I’ve played a decent amount of walking simulators. Some, were interesting enough by utilizing an engaging game mechanic or searching for intriguing historical facts of an ancient civilization. Essence caught my eye due to its sheer visual artistry. The question is, can this walking simulator offer up a fascinating microcosm or will I end up just wishing my little walk was over?

From what I’ve personally experienced, walking simulators always ride that fine line of the puzzle, pure visual art, or the hidden object genre. Usually, with a good sim, I just want to relax and enjoy the space it involves. Be it nature, space, or an otherworldly planet made of glitter-jello, I just want an escape. Give me some moderate to frivolous puzzling, perhaps a narrative or even an exposition of prior events. What I don’t want is frustration. I’m looking to settle back and enjoy the scenery, not get lost or irritated by game mechanics.

Of course, I’ve decided to start off by talking about screen options. Mostly, because you might want to check your specs first.

The recommended PC setup for this game is somewhat high with an i7 and 980. I initially thought that was probably too much for this game, considering I play other games such as Grand Theft Auto V and Rise of the Tomb Raider on high settings with a pretty much steady 50-60FPS. I game on a meager system using a mid-level card – a 1050 Ti 4GB. From the very first frame, I had stuttering at 1080P. I messed with the settings a bit, but seriously If you have a card around the same strength or less, I advise lowering the shadows or knocking down the resolution to 900P to get something closer to 60FPS. I fully understand we need some extra power for all the pretty graphics, but I was quite surprised. Even then, I would still get occasional stuttering on some boulders or dust particles. VSync helped with screen tears, but it did give me that usual sloooow vsync movement at times. So, for those without a 980 or equivalent, don’t expect 1080P at 60FPS throughout the game.

Keyboard and mouse work fine for controls, so I decided to test out the controller settings instead with an Xbone controller. Click on Options, and you can navigate the settings menu to adjust the vsync, shadows, resolution, brightness, and FOV but not much else. Also, the d-pad is non-functional, so you can only use the left controller stick. This would be great except that if you do not press perfectly down then instead of moving through the menu you start to affect actual settings. I really wish it used the D-pad. On top of that, the “B” button does not work to escape out of the menu. 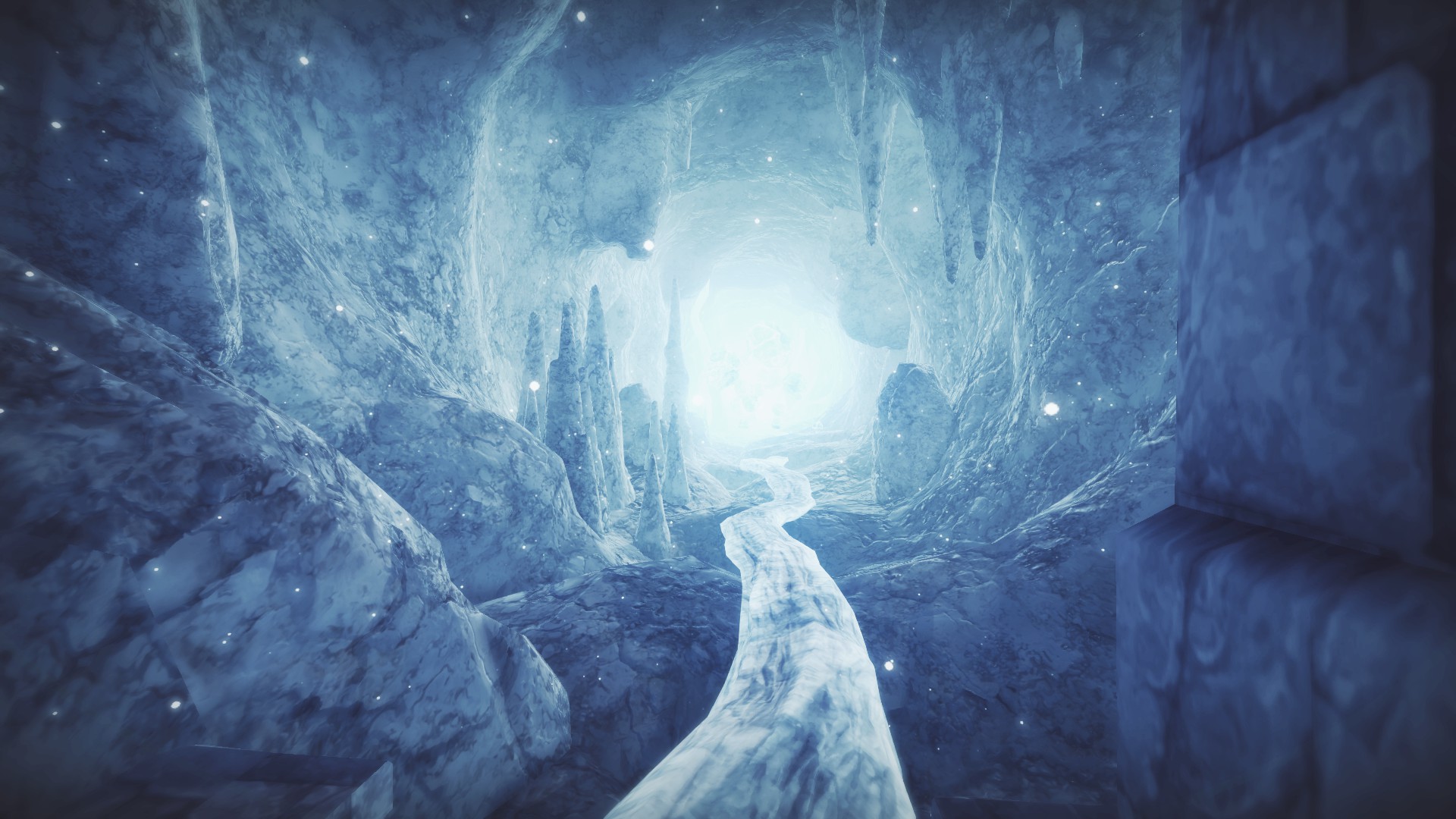 Now, back to the core aspects of the game. Are the sun rays, fancy rock formations and occasional snippets of storyline enough to hold someone’s interest? In its current state, not really. Essence starts out with a black and white barren landscape and gradually meanders about as you discover the hidden musings of a long lost civilization. While there are occasional environmental puzzles to unlock, they just barely count as gameplay. As with most walking sims, exploration is the bulk of your time here. You follow your gaze and see where it goes. It’s not without direction, as I can clearly see markers where there is a path to proceed onward if I want to skip looking about. It’s just that all the paths look the same. The terrain seems to replicate repeatedly to the point that if you backtrack, you might struggle to find your way. A half tilted column to the right, a few similar looking trees to the left, and just past..some part of a building that looks exactly like the ones I saw before..aaand you are sort of unsure of where you were. It’s not Breath of the Wild with vast areas to explore, but it’s vast enough and with the monochrome layouts it doesn’t have enough variety to give your eye much to discern for a landmark.

I pushed onward and finally came to an area with a sort of puzzly looking device that had no puzzle. Another gamer pointed out to me that this is the actual end of the level. I’m guessing there is more to come, but that was an abrupt stop. So, I backtracked – which took me absolutely forever because I could not tell one tree from another – until I found a door with three sparkly black diamonds I was unable to open previously. I opened that, and with some minor effort discovered the extra world of Genosha. While still quite monochromatic, at least there were some interesting areas and I was able to discover a few hidden goodies here. Galavanting about, I stumbled on a new puzzle area called Semblance and got royally stuck. I spent longer than needed here simply making lamps turn on. It was outright gorgeous, but I can barely see the lamps with all the sun rays and I keep getting lost because everywhere essentially looks the same. It’s akin to playing in the fog. This level is in need of more markers or I’m never going to activate all the lampposts. It’s not just a matter of touching them, but there is a certain sequence to it. I decide to try this again later when it’s not as frustrating.

A Spoonful of Story at a Time

As you progress, you’ll find bald, super creepy-eyed statues with orbs of wisdom to discover. These reveal two lines of text for the most part. Usually, they are musings that don’t form a coherent storyline – the backstory is more or less inferred from some poetic phrases. That’s not to say it’s an empty void as there are some characters to discover, but those are far and few in between. Again, the dialogue with them is sparse with an ephemeral quality. There simply is not enough of a story to follow to keep my interest, the main point of the game centers around mostly walking about as I expected – I just wish there was more variety, or a lure to get my enthusiasm up. All I really know is that the intro showed me falling from outer space and I landed on this alien planet. 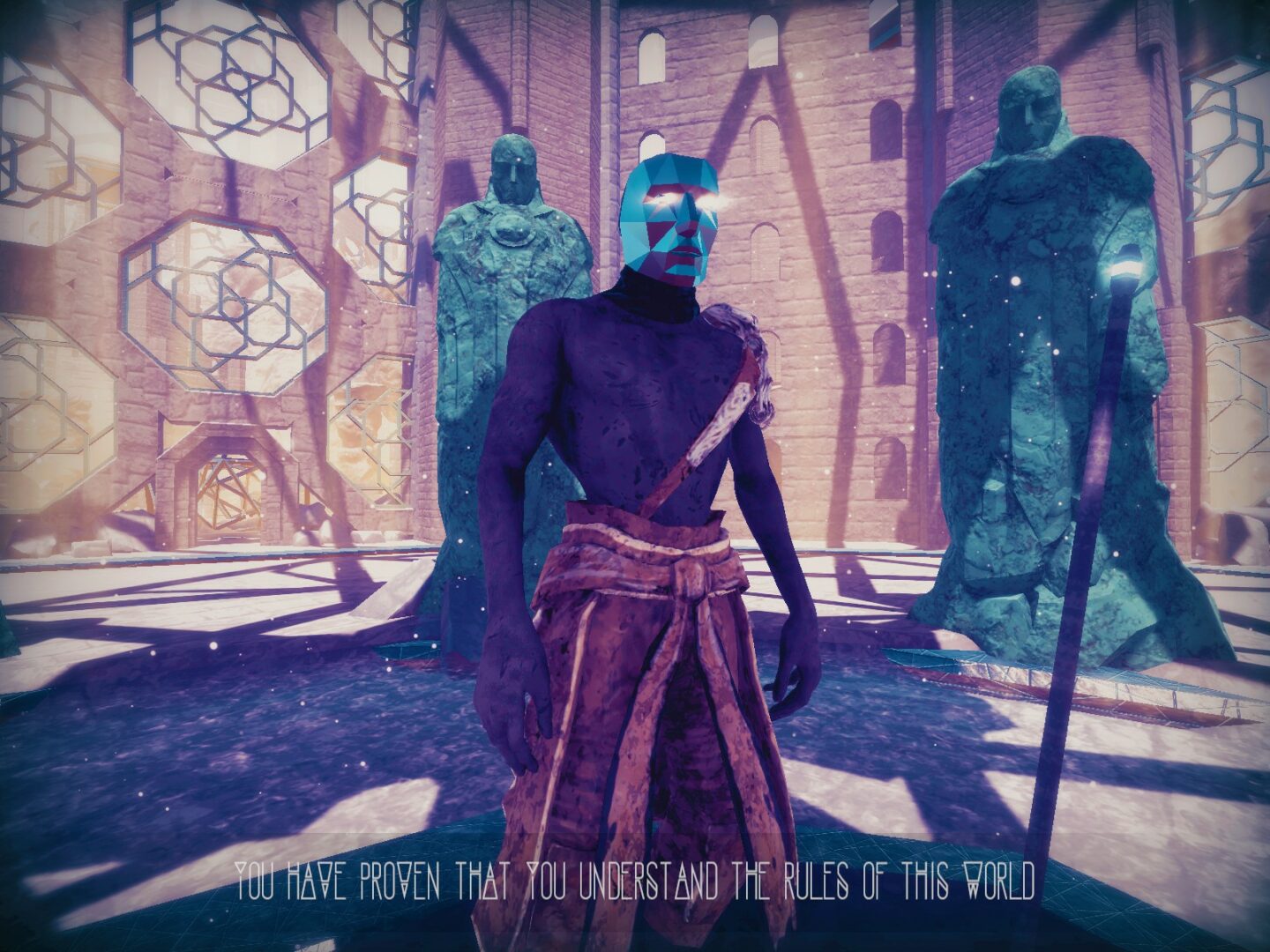 Here, the game excels as well as it does on a graphic level. Essence lays down pure transient background music that at times was more captivating than the scenery. Soft syncopated rhythms, foreboding alien motifs, and just a hint of melody so that you are more aware of your space than aggravated by it. Sound effects were rather clear and instantly informed the gamer of what is occurring within the game. Now, does that mean we have a huge variety of visceral effects that emphasize every footfall or environmental element? No, not at all. But, it’s a nice start for an Early Access game. 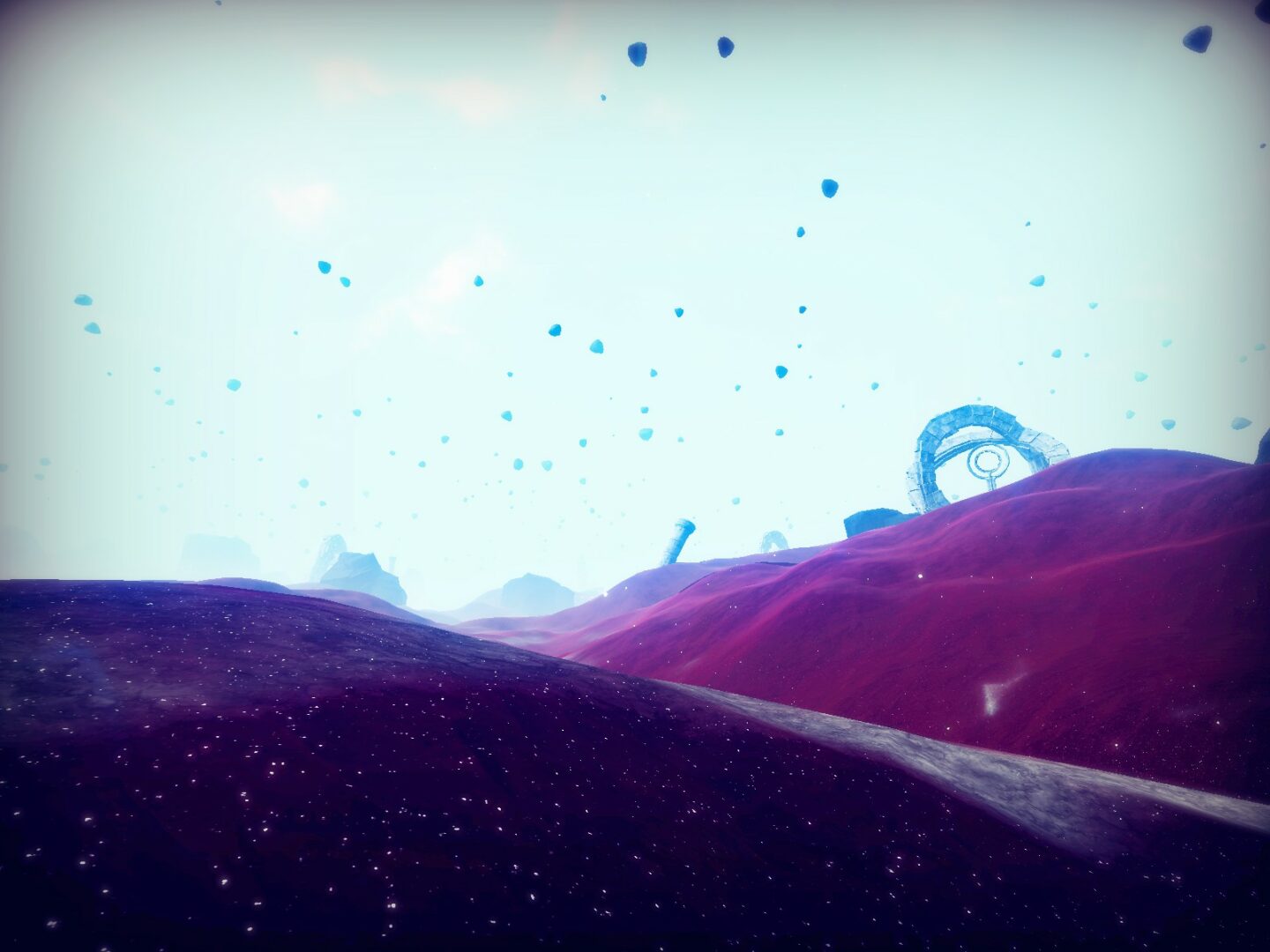 Herein lies the Early Access bit, because there is potential to improve and impress. Right now, Essence suffers from plenty of eye candy with mood music, but little else. I’m looking forward to the updates and fixes. The art direction is just amazing and it looks like someone spent ages meticulously putting the set pieces together. It’s sort of like a Lego set that you like, but all the parts look the same. I might have made Castle Greyskull out of them, but in the end, I have an awful lot of gray Legos everywhere. What I feel is missing beyond a meager story and some overused nature landscapes is interactivity. Not the type of interactivity with gamers fiddling about with things, but the interactivity of the game interacting with the gamer. What I would give for a squirrel running by, or a deer suddenly aware of me. The planet does not feel alive yet. If Essence can make it’s beauty shine with more spark than flair, I think it will ascend higher than it does now.