STLD Redux: Episode 2 is a unique hybrid of game genres that puts you in the leading role in a 2D pixel-graphic zombie movie for a single scene.

STLD Redux: Episode 02 is a unique casual action-strategy game from indie developer, Craig Daversa. It has recently been released out of Early Access on Steam, but I believe the basic game has been available through other channels for a number of years. STLD stands for Survivor – The Living Dead.

In STLD Redux, you play a young woman defending herself from an invading horde of undead, using whatever means she can find. Lucky for you, the small gameplay area contains an arsenal of weaponry, both formal and informal, and you only need to survive for a set time, which depends on your chosen difficulty level.

STLD Redux is played side-on, in two dimensions. It looks a bit like an action platformer in the screenshots, but it really isn’t. The game features detailed pixel graphics that remind me of the heights of the 16-bit era. Characters look good and move well. There’s a great range of different undead sprites and enough gore to be satisfying, without overdoing it. It’s a cathartic feeling, blowing zombie heads away with the shotgun after one of them has just infected you.

There are no graphics options and the game warns you of potential issues with the Steam Overlay if you play in full screen. I didn’t encounter any issues with it.

There was one very slightly annoying graphical issue. The game doesn’t support mouse input at all, in menus or in game, so why is my mouse pointer always visible in the centre of the screen until I manually move it somewhere out of the way?

STLD includes a couple of appropriate music tracks. The first is the title theme, which is minimal — just an occasional off-key note every now and then — but fits the spookiness of the game very well. The second is a loud and heavy dramatic piece that plays at key points in the game, such as when you only have a minute left.

Outside of these tracks, you’ll hear only the eerie distant sounds of zombies and cultists breaking down your doors or walking into your hastily erected traps. These sound effects are pretty good, too, as are the various gun sounds. I’m not an expert on zombie groans or firearms, by any means, but they sound realistic enough to me.

STLD Redux is unlike anything I’ve played before: a unique blend of casual action and survival strategy game. The game has no background story or lore included, but the basic plot is pretty simple: the undead are invading and you have to survive for either 10 or 18 minutes, depending on your chosen game difficulty. I found it a bit hard to get into at first, with no tutorial and no real idea of what I was supposed to do, or how. But after my first few deaths, I started to work things out, and then the game became much more enjoyable.

You begin the game defenceless on the left edge of the (very small) game area. Moving to your right you see some crates and a bear trap, and soon find yourself in a little cabin. Searching everything you find a shotgun and, hearing the telltale groans of zombies approaching, you ready yourself.

“Come get some.” you mutter under your breath as the door bursts in. (Well, I did, anyway.)

The gameplay involves searching for items with which you can defend yourself until the timer runs out. The small map features two buildings in which you can barricade yourself to a degree. But your enemies are strong and can knock down locked doors — even when you board them up — so it would do you well to gather whatever weapons you can find and stockpile them if you want to hunker down. 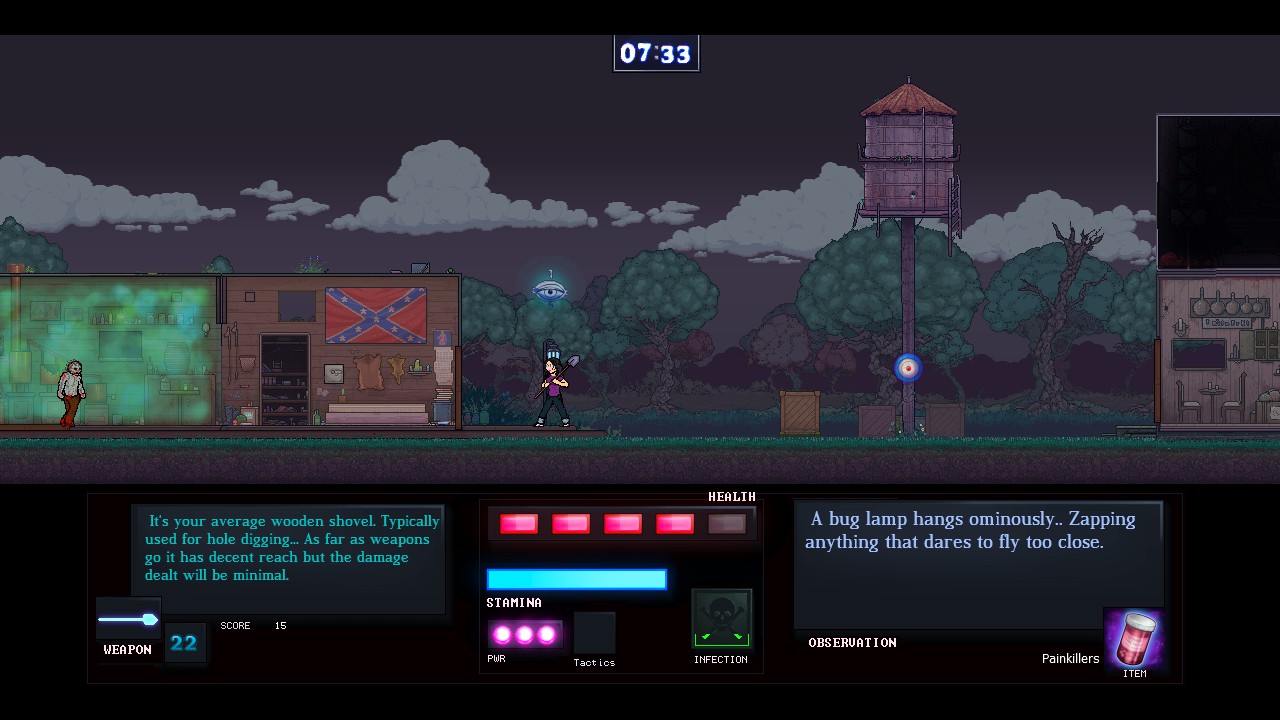 There are a number of ways to take out zombies, including some nicely implemented traps — the aforementioned bear trap is only the first, and simplest — and, of course, the direct method: knife, shovel, mace, pistol, shotgun, and assault rifle. Ammunition is very limited, though; it’s much more a thinking man’s game than a shooter.

Get hit by a zombie and you’ll not only lose one of your five health points, but you’ll also become infected with the zombifying disease. Health points can be recovered, but once you’re infected, it’s only a matter of time; you can pop some pills to temporarily reduce the infection level, but only temporarily. So if you get infected early on in your game, chances are you’ll end up dead. Depending on how long you survive and how many zombies you kill, you’ll gain tokens as a reward. These can be spent on small powerups or revealing secret hints to make your future play throughs easier, and once they’re unlocked they are permanent.

The game supports keyboard and controller, but both sets of default controls are a bit weird. I ended up going with the controller after my first few games, and found it easier that way. Left stick moves, AXYB buttons control interacting with the world and attacking, and up arrow and RB handle the inventory. It basically works, but it’s a bit clunky. I found it particularly irritating that the first time you find a weapon it’s always investigated with Y and picked up, but then if you drop it and want to pick it up again, it’s X and not Y. Time after time I’d stand over a weapon frustratingly pressing Y before I’d remember that after the first time you pick it up, it changes to X. It’s not very intuitive. 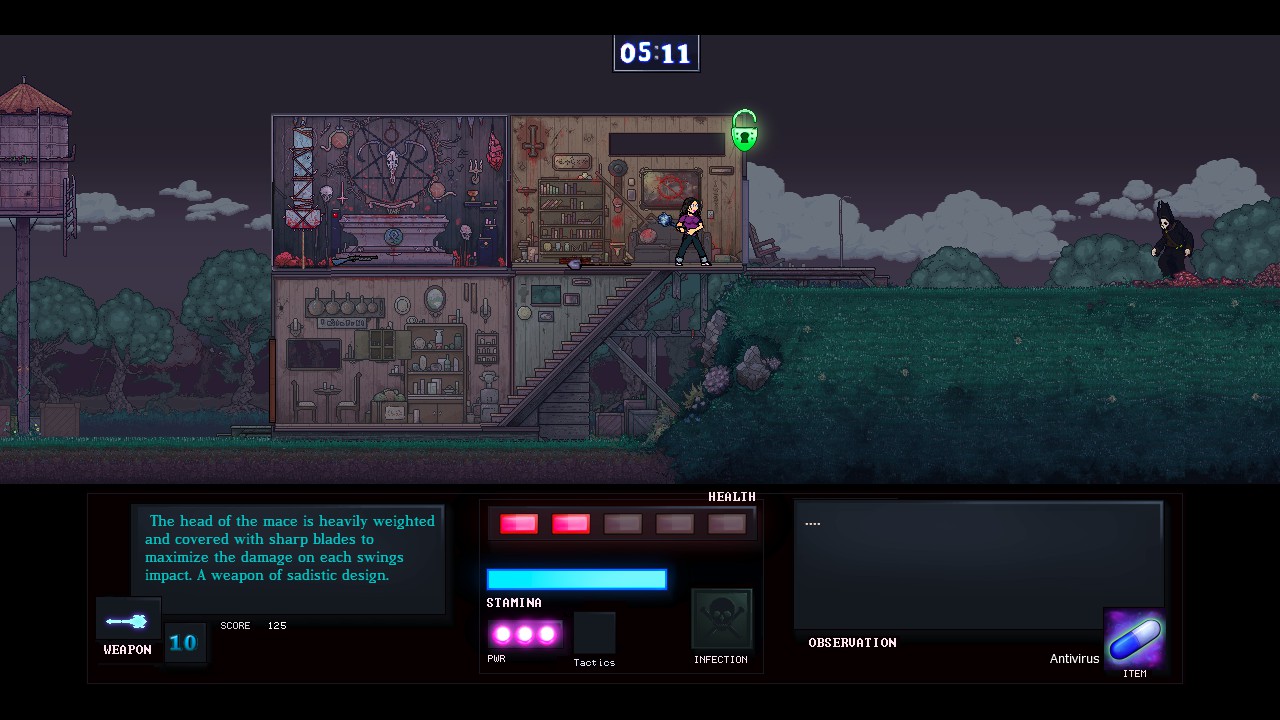 The game does have a few rough edges, too. There’s no way to configure your own controls, and the default ones are a bit hard to get used to. There’s also no mouse control, in game or in the menus. And there are a few little quirks of the interface that continue to annoy me even after playing for a couple of hours: when you’re in front of something with which you can interact, the game won’t always let you cycle through your inventory (though it sometimes seems to); you’ll have to walk away, find the item you want, and walk back. The stairs are also a pain; I always seemed to find myself going down them when I wanted to walk past them instead. The controls on the rewards screen aren’t clear at all, and I found myself spending my hard-earned tokens on things I didn’t really want, with no way of changing or undoing them. Oh, and please fix the icon legend screen when starting a new game: the word is “accessible”, not “accessable”.

Probably the biggest issue I have with the game, though, is the size of the game world, and the fact that it doesn’t change when you start a new game. This severely limits the replayability, I think. With such a small game world, you’ll quickly see all it has to offer. And with no changes to the world between plays, once you’ve seen everything, there’s little enjoyment to be had by going back to try again. It’s great fun while it lasts, but it doesn’t last that long.

Cons:
– VERY small game world: only one level, with the same locations of items each time
– Becomes repetitive quickly
– Some interface issues

My first impressions of STLD Redux weren’t great, and if I’d first played it in a bad mood I might not have given it a chance. But in doing that, I would have missed out on a gaming experience quite unlike anything else I’ve played.

Is it perfect? No, definitely not. Is it repetitive? Yes, definitely. But is it fun? Strangely, yes; yes it is. The developer has captured one short scene from a zombie movie and given you the chance to play the clever character who survives. It’s not for everybody, I’m sure, but I’d love to see/play the whole movie, should the developer expand the gameplay into a much larger world with his next game.