A Hole New World is a throwback to the old days of the NES era, from which it draws a lot of inspiration.

A Hole New World is an old-school action platformer with a very retro look that tries to distinguish itself from others like it by giving the player access to a variety of basic attacks, and by featuring stages that are composed of two different worlds: a normal world and an upside down, or inverted, world. It clearly looks, sounds, and plays like something that came out years ago. Therefore, I feel like it should be no surprise if you have never heard of this game, considering that it belongs in a somewhat niche genre. Still, the game was successfully funded on Kickstarter back in 2015 and has now been released on Steam, clearly showing that there’s still a market for this kind of game.

The game offers speedrunning tools as well as a score element, in which the game rewards you with points for killing enemies and picking up items such as food and crystals. As you increase your score you’ll also gain extra lives, which certainly help you in reaching further in the game. If you do run out of lives, you’ll respawn back at the last checkpoint you activated, with two lives and your score reset. Besides the base story mode, the game also supposedly offers a boss rush mode, New Game+, a challenge mode, and multiple endings, but I assume these are only unlocked after first beating the game. At the time of writing, I’ve yet to beat the final boss of the game, so I can’t provide insight regarding these other modes.

In terms of story, this is not the game’s strongest suit; there is barely any focus on it besides the initial introduction, played when you first run the game and when you start a new game. With that said, what the game provides in this field is done right from the very start. You play as the Potion Master, and you’re the last hope of stopping an evil invasion that’s pouring through several holes in the ground with the intention of conquering the world of Versee.

The game is divided into about half-a-dozen stages, each with its own unique theme, looks, and enemies. In each of these stages you’ll find yourself changing worlds quite often by making use of holes in the ground, in order to avoid spikes, collect items, or simply find an alternate path. Besides the variety already mentioned, some levels also have special tiles that can have various effects, such as ice tiles that make you slide, or others that reduce your movement speed.

Despite the fact that the levels are extremely linear, without even the slightest degree of backtracking, I still managed to lose track of where I was every now and then, partly because of switching worlds back and forth. I would’ve liked to see some sort of map for each one of the stages, even though they’re relatively small. On that note, one small detail that is worth mentioning is that whenever you transition from one stage to the next, the game shows a small depiction of the environment, picturing both worlds of each stage. I like this feature, though the quality of the graphics is debatable.

The game focuses heavily on combat and, as you progress through the game, you’ll unlock more attacks, one per stage, up to a total of four. The most basic attack consists of you throwing potions in an arc, dealing damage on each hit. After that you’ll unlock another potion type, which once it hits the ground creates a lightning strike that deals damage to enemies. Then you’ll unlock another one which lets you throw balls that switch between ice and fire every time they bounce off a wall or the floor. And the last potion you’ll unlock allows you to throw wide, circular-saw-like blood attacks. Switching between potions also changes the colours of your character’s clothes, helping you to figure out which potion you have equipped without having to actually attack.

As well as having these different ways you can attack, you can also choose the direction in which you strike: up or down, left or right, or diagonally, and jumping or crouching also affect the range of your attacks. This provides multiple ways for you to handle the different enemy types. Along with potions, you’ll also unlock some abilities, but there is no way to check how these can be executed after the game first shows you that you’ve unlocked them. The only way you can check whatever keys you need to press in order to execute a specific ability is if you write them down as soon as the game tells you that you’ve unlocked them. It was only just before the final boss fight that I remembered how to perform one of these unlockable moves! You also have a little fairy companion, who as well as reviving you, allows you to charge up a special attack that is very effective in dealing with groups of enemies. 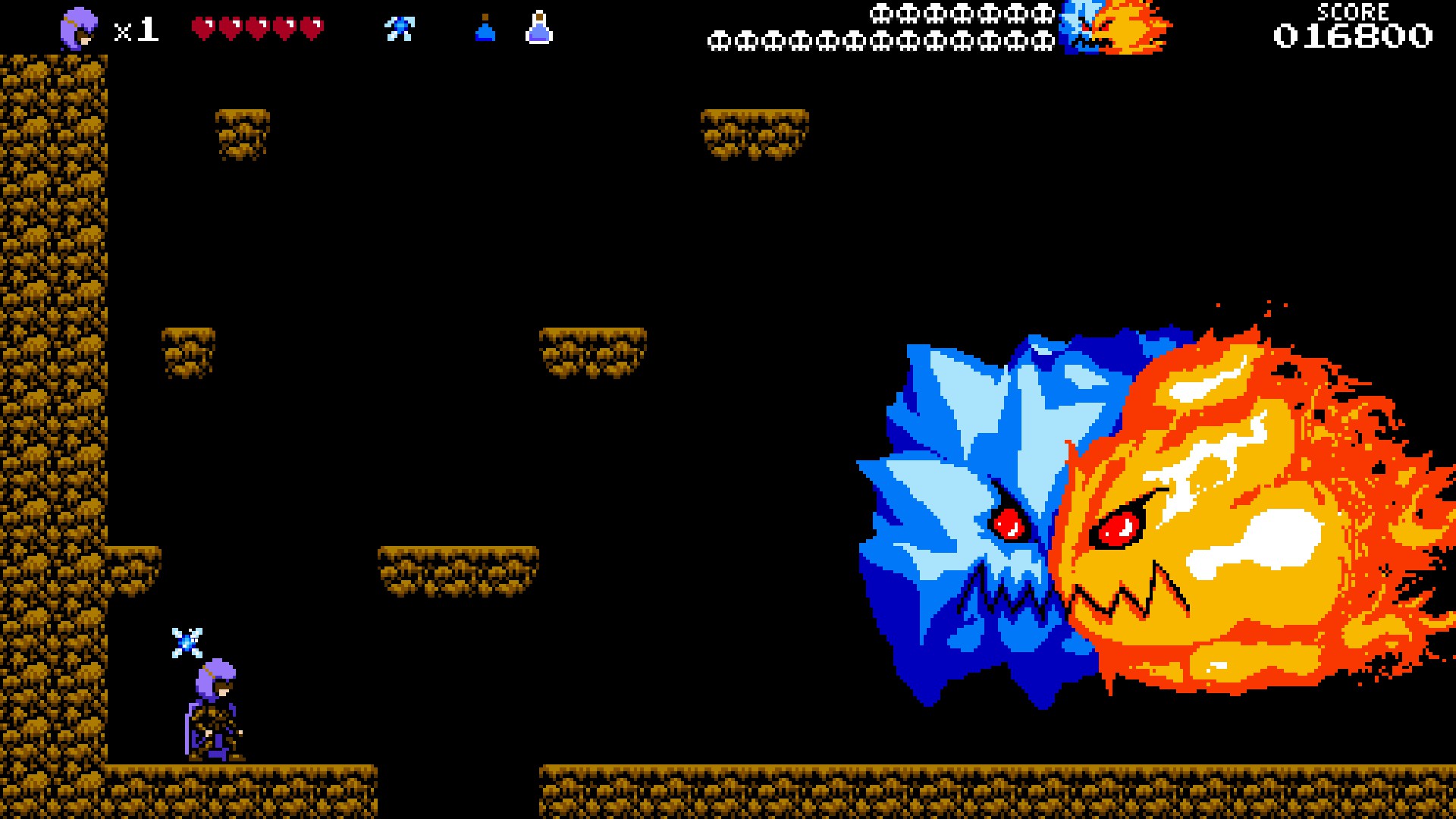 Considering the fact that A Hole New World has its fair share of bosses, the game is, in my eyes, plagued by a rather bothersome issue that frustrated me a few times. Sometimes I’d die after killing the boss and the game would restart at the last checkpoint, thus rendering my victory against the boss useless. I understand that it makes sense, since when you’re dead you’re dead, but I’d have liked to see these deaths being forgiven; a checkpoint after each boss’s death would be an easy fix. In any case, although in general I found the game to be rather easy, it did seem to have random difficulty spikes at certain points. The final boss fight was what killed things for me, since he can kill you with one hit by grabbing you while you’re in the air and, since this is a game about memorizing enemy patterns, I found it hard to react to some of his blazing fast attack animations. Maybe I’m just getting too old for this sort of thing. One last thing that bothered me quite a bit is the fact that lives become useless during boss fights, because if you die you’ll respawn outside the fight and you’ll have to start all over.

As far as technicalities go, the game’s controls feel tight and responsive, but, as with the vast majority of platformers, I recommend playing with a controller. As for the actual visuals, the game offers a CRT filter if you’re into that sort of thing, but other than that there’s not really much else you can customize. With that said, while I do like how the game looks, I feel it’s likely that some people won’t appreciate it, while others will still enjoy it for the nostalgic value it provides. The same goes for the game’s music, as it features a rather catchy bunch of chiptunes but that might not be everyone’s cup of tea. 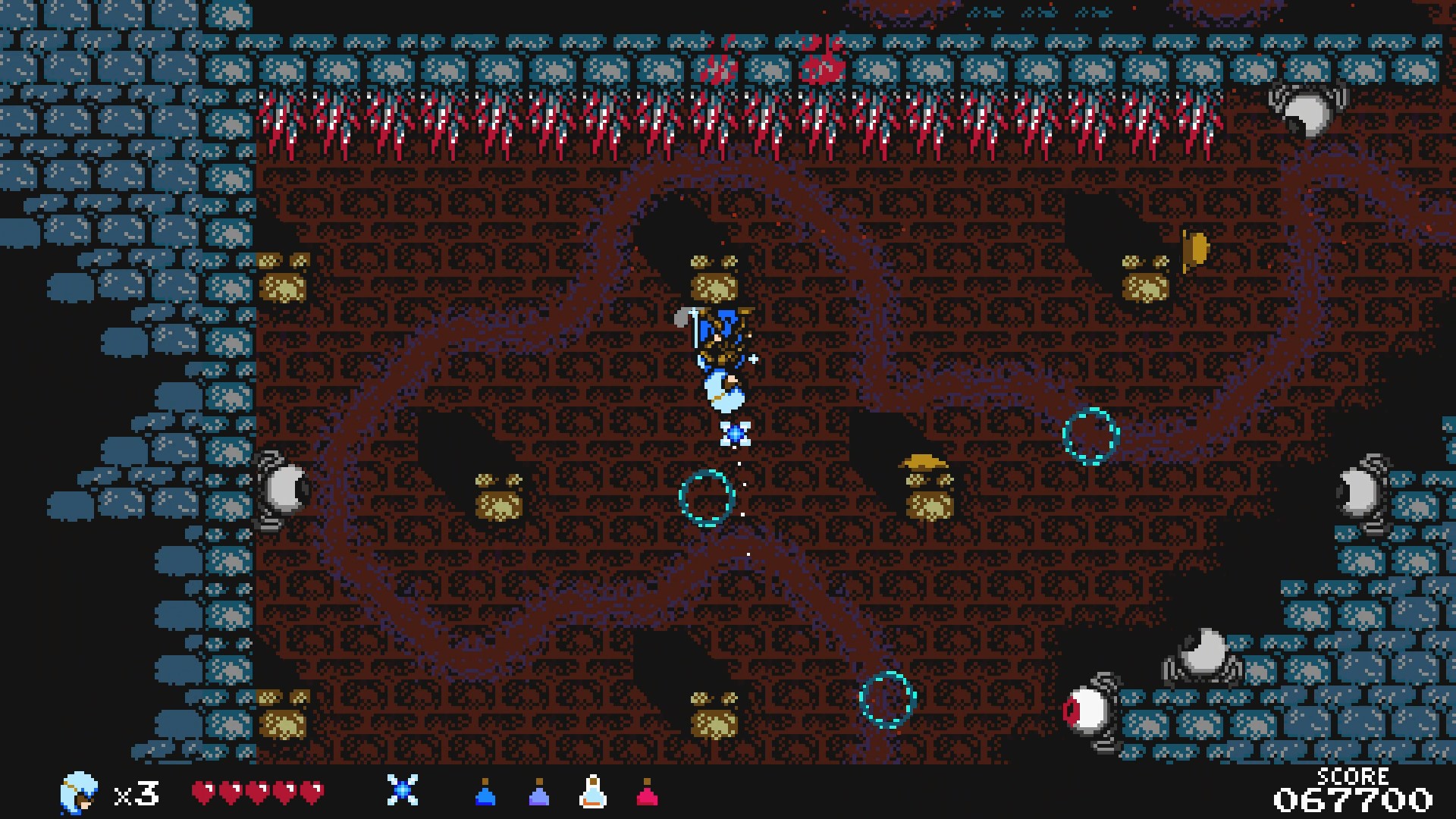 Overall, even though the game presents some nice ideas, especially the concept of changing between an upright and inverted world perspective, I still feel like it could’ve done much more in order to stand out. The story mode also appears to be around three hours long, which might put some people off, considering that this is a $10 game and there are alternatives that offer more hours for the same amount of money. It’s not that A Hole New World is a bad game, but it doesn’t do enough to classify it as a must play. Unless this looks like something right up your alley, I’d recommend waiting for a price drop.