Prey is an excellent FPS / RPG hybrid that can stand on par with legendary titles such as Bioshock and System Shock 2. With a superb setting and interesting storyline, it is possible one of the greatest games of this year.

Prey, the last work of Arkane Studios, published by Bethesda Softworks, is an FPS / RPG hybrid heavily inspired by classics such as Bioshock, Deus Ex and System Shock 2. This title features complete player freedom and great variety of situations as main gameplay centerpieces, other than, also, an impressive setting and storyline.

General Gameplay
The gameplay of Prey is a mixture between, essentially, Bioshock and System Shock 2. If you don’t know these titles (and you should), know this: Prey is an FPS and RPG mixed together, there is inventory management, weapon upgrading, skill points to spend in many different abilities ranging from utility, to weapon proficiency, to more exotic powers such as telekinesis, pyrokinesis, time distortion and many others. A huge, fully explorable open map full of secrets and details to discover, main and secondary missions with various characters, multiple endings… all this with complete freedom of choice as what to do and when, you can save yourself and don’t give a damn about anyone, or be a hero, or just be a murderous maniac, up to you. enemies will be quite varied, but not overly so, what they lack in variety make up in combat style and depth of artificial intelligence, as they will be very smart, hide when in danger, try to ambush you from behind, and a whole gamma of behaviors which are above average among AIs we see around generally. There is a lot of interactivity with the environment: everything not bolted can be thrown, used as makeshift cover, or even bludgeoning thrown weapon, lots and lots of containers, doors, conduits and shafts to open and explore, pipes exploding, glasses shattering left and right, objects flying in a chaotic galore. Few environments especially during combat have felt as dynamic and alive as the one in Prey.

Combat System
Combat in Prey is generally following the saying “quality over quantity”. You will never face massive hordes of enemies, instead the game more focuses on combats against a smaller number of opponents, but with better quality for each enemy. enemies will sometimes support each other by, for example, upgrading weaker ones with buffs, escape and outmanouver you with speed-based powers, attack you from a distance while others engage you in melee to put you in disadvantage, use environment items as thrown weapons to kill you. No combat is the same and environment plays an important role in it, since both you and enemies will try to use it at your advantage to make it out alive. The system is straightforward, FPS like, but with the depth of an RPG, all while in real time. Very well done and satisfying.

Content
As pure longevity, the game is around 30 hours if you want to do everything, intended as side quests, at least all the ones doable in one playthrough. If you want to find all the tiny bits like audio files, text files, etc. it will depend how keen your eye is, but i’d say 35 hours should suffice. If you want to do all the endings each in a separate play, it will take you 4-5 times to do each ending, and also experiment with all the possible various builds, as it is unlikely to get all the possible upgrades in one playthrough, even if it is possible but very long to do.

Balancing
At the game’s start, on higher difficulties, the game will be very, very hard as even the weakest enemies will be a major threat. As the game progresses, it finds a sweet, perfect spot around the 8-14 hours of gameplay, depending on skill and how much the players explores and dedicates time to find all the hidden supplies lying around, but generally after 15-20 hours so at 70% of the game approximately, it kinda becomes quite easy as many weapons will be fully upgraded, many powers and items at the player’s disposal, enemies will be blown away with the right power / weapons combos and generally it will be a bit too easy. Overall, definitely, balance is not terrible but is a bit off at the beginning and in late game, but at mid and early it is very good.

Challenge
On highest difficulty, this game is quite challenging until a point. If you are not a dedicated, keen-eyed observer who reads everything (and finds codes), finds all secret places or most of them, takes time to recycle useful stuff, loots all containers, etc. the game will definitely be much harder as exploring and looting gives you a lot of stuff that will ease your stay on Talos by A LOT. I’d rate the challenge High for the run’n’gun player and Medium for the more observant and looting player. 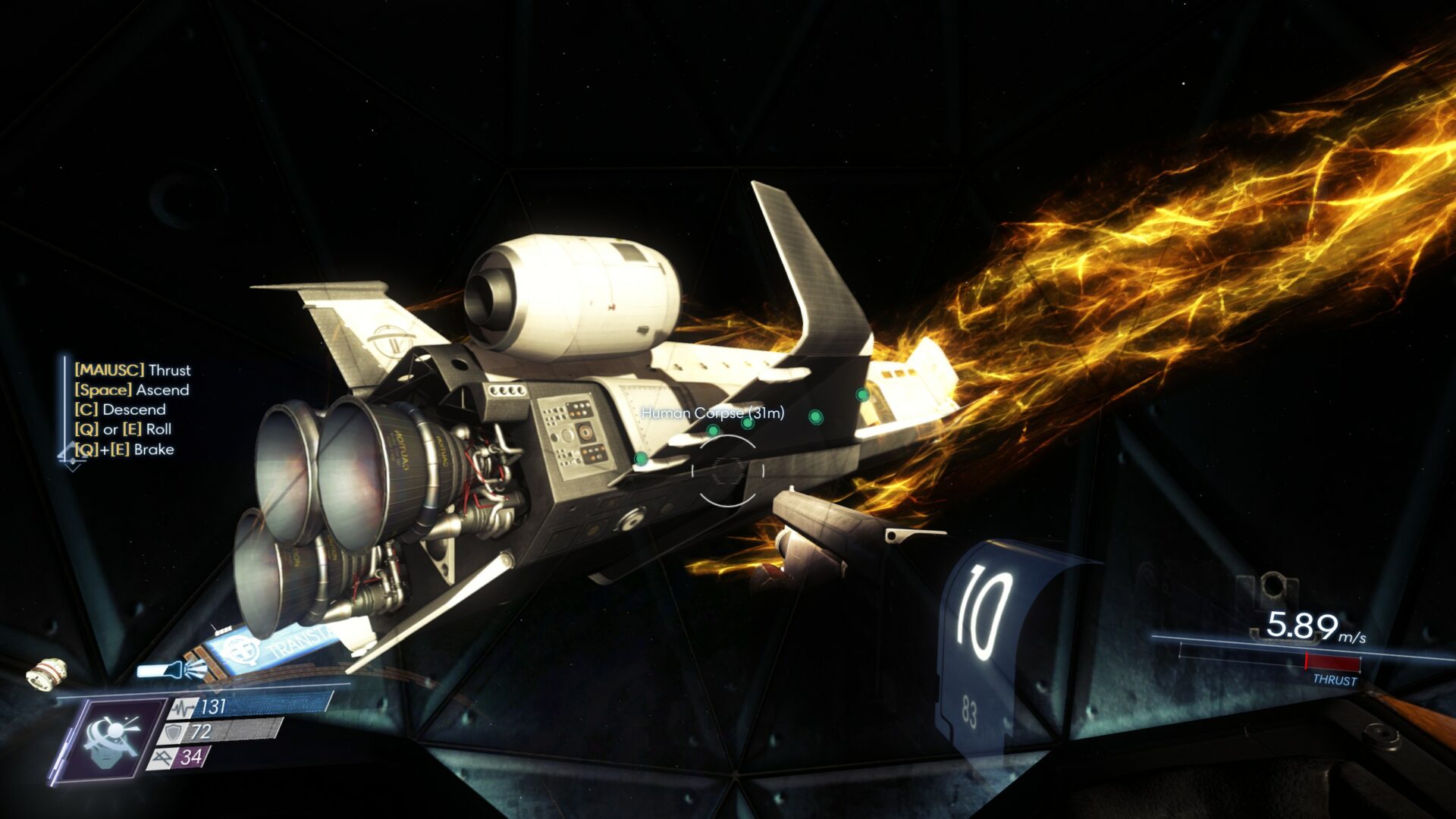 Graphics
So, lets’ say it right here, Prey has a fantastic graphical makeup, period. Particularly noticeable are the very good dynamic light effects and the ambient occlusion, very realistic and well done, give the whole game the atmosphere it deserves. Models of weapons, enemies and characters are good but some could use a bit more detail and polygons, especially of some weapons. Environment design and props are detailed, well made, too bad the general palette of colours and textures is a bit small compared to other titles and there will not be this very remarkable difference in atmosphere from one place to another some might expect to find. Also, the aliasing at 1080p is still noticeable even with TAA2, the best antialiasing, activated. Still, Arkane Studios managed to pull off an impressive array of details and effects and if you look for a pretty game you found one.

Sound
Sound design and music in Prey are fantastic, I mean fantastic. soundtrack is spot on tense when it needs to be, melancholic when it needs to be, just what it needs at the right time, heavily emphasizes moments and fixates them in your mind spectacularly. Sounds will be well done, different basing on distance and ambient, a very good sound engine has been used for this, more than once you will turn around and say “what the hell was that?” wondering if an enemy is following you silently or it’s just some debris falling somewhere in the station… 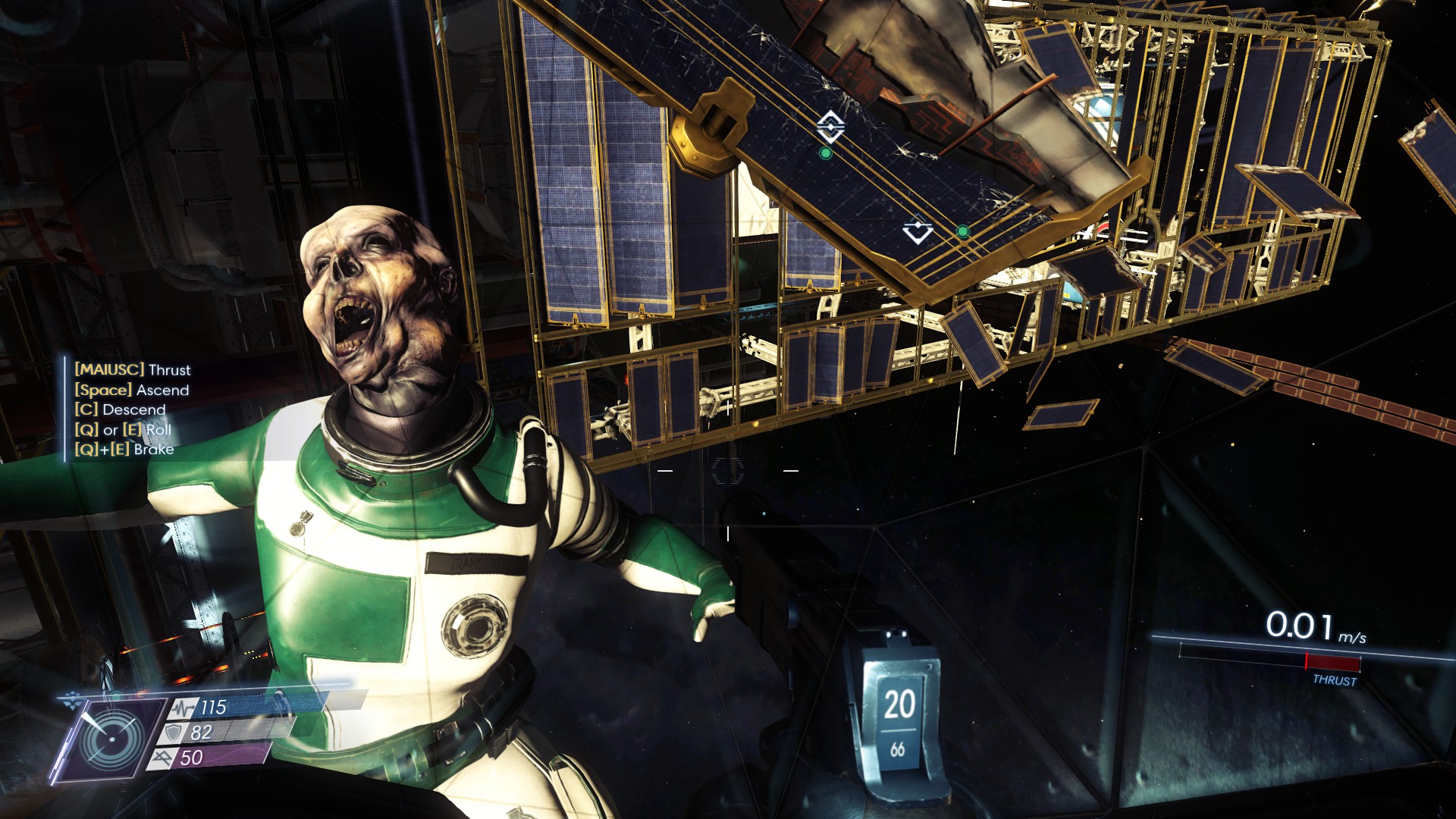 Performance
Optimization, really good, runs good with no stutter / tearing / popouts or any other problems, will run even on machines some years old but don’t expect to run this on low end stuff.

Stability
Bugs related with savegame corruptions have been fixed, no major crashes or problems to report.

AI
As said before, AI of enemies is very elaborate, will feature advanced tactics such as one rushing to you as shock trooper while others attack you from far away, if enemies are at an advantage will attack and if wounded or disabled try to flee to then attack you later when you don’t expect. Very well done. Too bad the stealth system Ai is a bit dull because they will lose track of your movements quite easily.

Quality of Life
Good UI and inventory management. Quests displayed and how they are organized could have been done better, but decent. No major quality of life problems to report as of now, most were fixed.

Bugs / Issues
Nothing major, sometimes bodies with ragdolls will penetrate moveable objects such as chairs or sofas, that’s the only bug I saw. 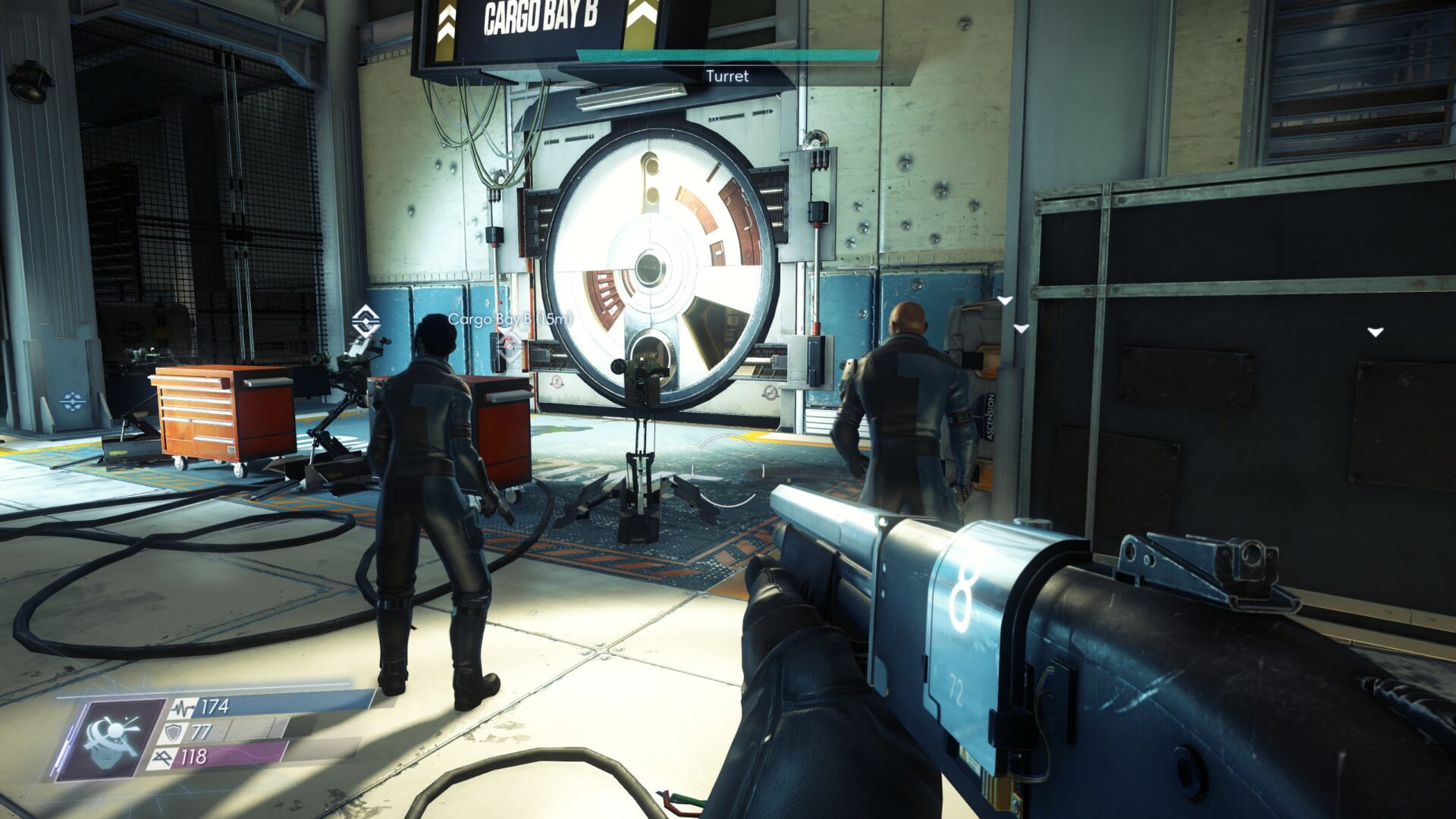