Oh What Fun We’ll Have

Coming to you live from the Underworld, the Great Overlord Zeabolos, Satan’s grandson, faces off against Trillion: God of Destruction. Thrill at the action of battling Overlords facing off against the insurmountable beast with one trillion hit points! Cue the montage music as we watch those Overlords train like their lives depend on it… mostly because they do. That’s right, these are no-holds-barred grudge matches between Trillion and the denizens of the Underworld. This is a battle that will surely go down in the history books. Should the Overlords fail, the Underworld as we know it will be consumed by the ravenous Trillion!

Figuring Out What To Do

Trillion: God of Destruction takes on the tried and true Idea Factory game format and there is not a darn thing wrong with that. For the most part, the game is a visual novel with light roleplay and strategy elements. You are Zeabolos, the current Great Overlord, who helps guide the preparations each Overlord makes before facing off against Trillion. How you prepare is left almost entirely up to you. Peppered throughout your preparations are events that will either progress the story further or offer a bit of randomness to the game. The random events appear to be purely luck based; I believe the game randomly selects one of the options presented to you as the correct one for that particular instance of the event. Selecting the same option the next time the event appears will not yield the same results. There may be some way to tell which option is the correct one, but so far I have not managed to figure that out.

Speaking of randomness, one of the main things you should be doing to prepare for your battle against Trillion is training. Selecting the training option allows you to pick the style of training you want. The style of training defines how experience points are allocated. The one you choose receives the most experience, but you also receive some experience for all the other elements. The training results rank appears to be almost completely random as well. I can tell fatigue influences your chances, but you have no real power over what the outcome of training will be. Your Training Rank seems to be randomly assigned to you each time you go so there is really no way to hone your skills there: just select the training you want and hope for the best. Even if you get a poor rating, you still receive some experience and a gift token for your attempt. Scoring either the highest or second highest rank will also net you a medal that you can use to enter the dungeon. 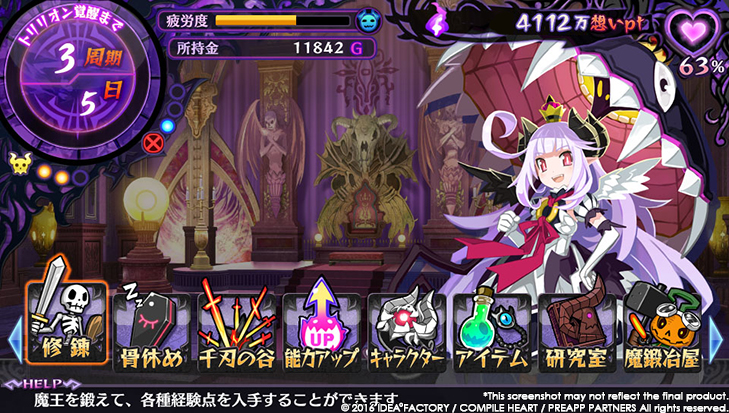 Dungeons, Overlords, and Affections, Oh My

The Dungeon is the more traditional gameplay element of the game outside of the boss battles. Once you collect five medals you can enter the dungeon to find treasures, coins, and even more of that valuable experience. The nice thing about the dungeon in comparison to almost anything else you do in the game is the fact it doesn’t progress time. That means that you can run the dungeon repeatedly without needing to worry about advancing the Doomsday (Trillion-awakening) Clock. It also makes a nice change of pace. You can’t just rest and relax in there, though; you are only permitted a limited number of moves before you need to escape the dungeon or you will lose all progress made.

If honing your skills and exploring a labyrinth are not your style or you want a change of pace, you can also do various other things. For example, you can ask the citizens of the Underworld to help fund your war effort. You can give gifts to the Overlords to increase their affection, which acts like a shield in battle. The more affection Overlords have for you, the longer they last in battle before taking HP damage or using their MP. As well, you can also spend time with the Overlords to raise their affection a little. As mentioned earlier, for training or really anything in the game that progresses time, you get a gift token. These gift tokens are redeemable at the Gift Dispenser. It’s purely random what you get and you are not told who would appreciate what gift the most. You either need to get to know the characters a bit or just hope for your sake that it will be appreciated when you present a gift to one of the Overlords. 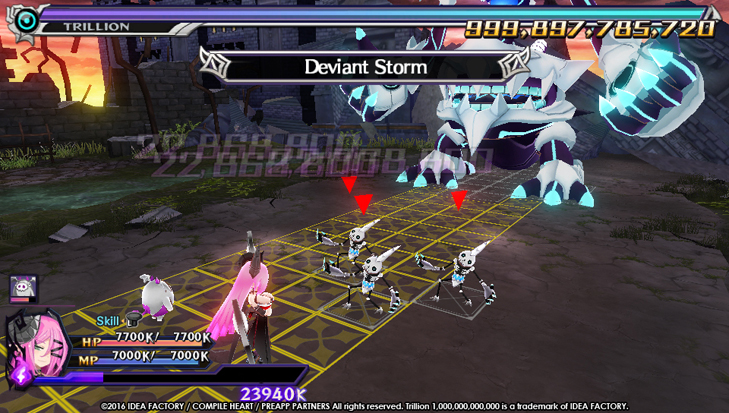 As for Character Development, this is a bit of a difficult conversation to have with you, dear reader. Without wanting to spoil anything, I have to say that, for the most part, experience is never really wasted. You should spend your experience on whatever you think will make your Overlords the best they can be. If you discover something that isn’t working, then tweak your build on the next Overlord you train. The game lets you spend experience in three different categories. There are the Traits/Stats that you typically find in these kinds of games, such as Attack Power, Health, etc. There are also Passive (always on) and Active (select in menu when wanted) skills on which you can spend your points. Each of these skills has multiple levels so if you find a skill you particularly like, you can always spend more experience on it to boost it to its maximum level. As for your coins, it’s hard to make a suggestion here. The weapons each Overlord uses are locked to that Overlord. If you upgrade one Overlord’s weapon it has no effect on the other Overlords. Also, all Overlords take their gear with them to the battle with Trillion and once the battle is over, they do not give back the gear. Therefore, I would suggest saving your coins until you understand exactly how the game works before sinking them into character development.

The characters in this game, like most Idea Factory games, are all well designed and unique in their own way. They each have their own personalities and character designs. As you train the Overlords you come to know them better and you may even find yourself getting attached to some of them. That makes the reality of what is to come all the more powerful and moving. All your efforts in training and development are put to the test when Trillion, the God of Destruction wakes from his slumber. Should your Overlord be successful at this point, the game offers up one of its ending sequences. Should that Overlord fail, Trillion will begin destroying the Underworld until its hunger is sated and it falls asleep once more. This gives the next Overlord a chance to train and prepare for his or her turn against the beast. Luckily, all the efforts of the previous Overlord were not in vain; the damage dealt to Trillion remains after each battle. Defeated Overlords also pass on some of their experience to the next fighter.

The combat in Trillion has a bit of a learning curve, but once figured out, it works quite well. You are snapped to a grid and you have to rotate the camera in order to help control where you want to go. You also have limited attack ranges, with some skills allowing you to attack things beyond your melee range. You need to be ever vigilant to the actions of your opponents and plan your moves in advance. If you just blindly run up to the boss and start attacking it, your fight will end almost as soon as it began. Lastly, this is not turn based. When you make a move, the enemy also makes a move at the exact same time. 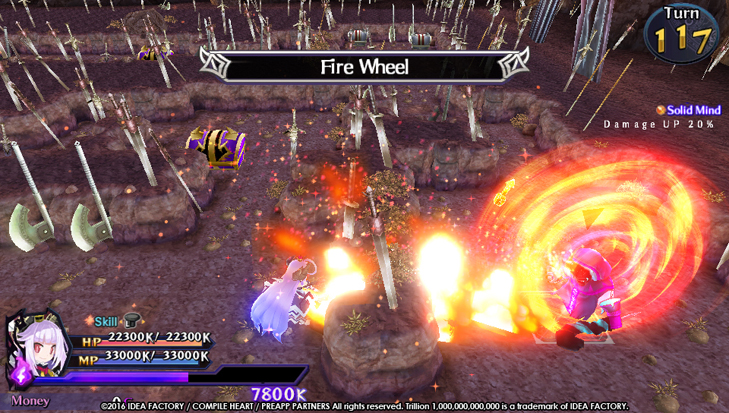 So should you get this game? Idea Factory really went off the book when they made Trillion. It’s probably the most unusual game I have played in quite some time. It seems to have taken elements from various sources and wrapped them into a package that works quite well. There are a few issues here and there where the dialogue and audio track don’t sync up properly, or there are a few typos, but those kinds of things can easily be ignored. The training/development section of each Overlord becomes a bit of a chore the further you progress, but the random events help keep the game fun and entertaining. All in all, Trillion: God of Destruction scores high as another wonderful Idea Factory game.