2.5D logic puzzler with a bit of adventure thrown in. Vivid, colourful graphics and engaging gameplay but spoiled by sloppy execution.

You play as a little robot (I think there are 3 of them but if so they all look the same). You have to plan a route for him along catwalks to hit nodes and reach the exits. You do this by setting a series of actions (forward, backward, turn-left/right, activate, jump, attack…) and then running the program to set him in motion. You keep modifying the program until you get it right, so more often than not you’re running the program over and over, adding new steps to get further each time. You have a limited number of ‘memory cells’ (steps) to reach the exit and I vagely remember something about the less steps the better.

As you progress, new commands are added to your arsenal to allow for increasing complexity of your program. You can also (optionally) pick up cubes which increase your ‘pointless points’. I think you can use them to buy hats.

There is some kind of storyline but it’s not inspiring enough for me to remember what it is. Just the usual kind of thing for this genre. One thing I will say is that the dialog is excellent at explaining new mechanics clearly. It can be hard to remember though, I often have to refer to the MANUAL to see which commands I might use to solve the level.

You can use X to scan the level to reveal items and information about nodes, which can be quite useful to get your bearings when you first enter a level.

After a few programming levels there’s an open world ‘Free Memory’ level that’s like an Easter egg hunt. It’s a lot of fun rummaging around in bushes and opening treasure chests then eventually finding the exit. The night/day/weather cycle is a very nice touch. However, what’s not so much fun is being often transported back to the Main Quest from the normal levels when you do something wrong, or after you exit to main menu. Having to wander around Free Memory constantly to find the exit before you can continue with normal levels becomes frustrating (no, I can never remember where the exit is). I’ve been there and done that, I’d like to move on please. By now I’m sick of it. Talk about spoiling a good thing. There are no manual save slots, of course, so no help there either. 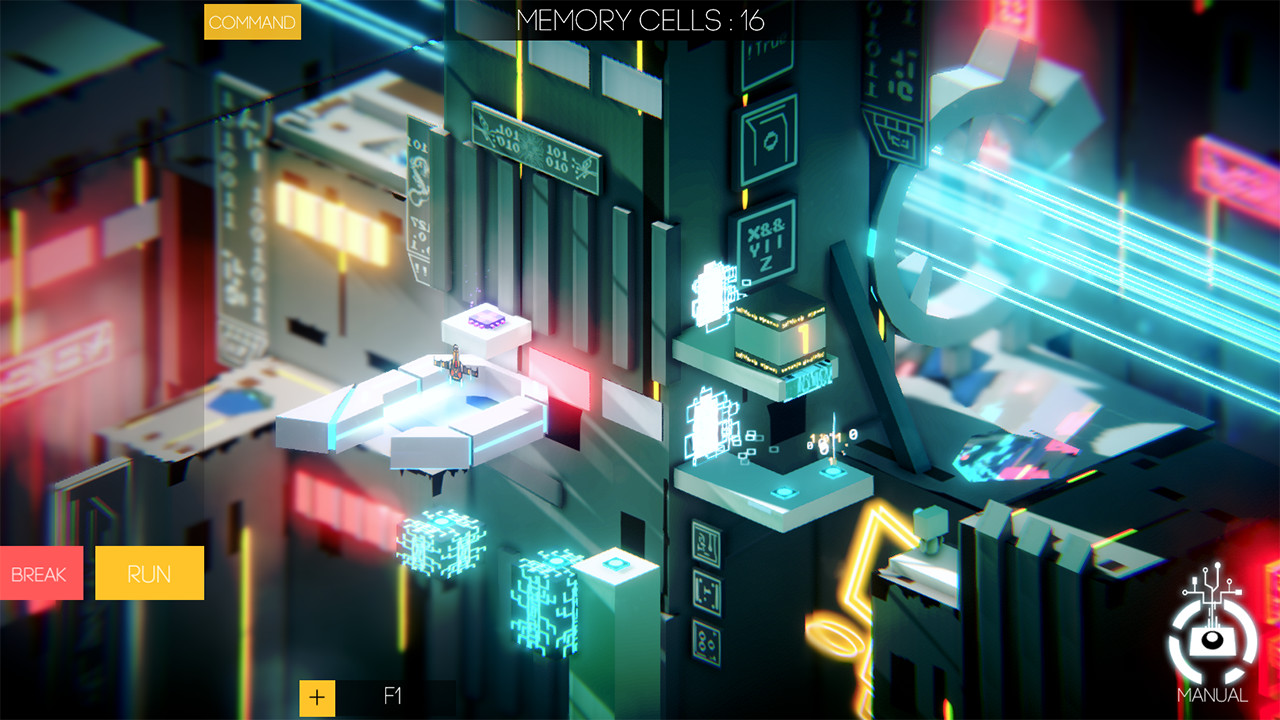 Graphics are lovely, very bright and colourful with fabulous use of lighting and interesting details. Glowing objects really pop and the whole screen comes alive, especially in Free Memory when you’re doing a main quest. At first my GPU (GTX550Ti) was paying a high price for it – my PC fans were blowing like a jet engine the whole time. Then I found the ‘SSAO’ toggle on the options menu, and disabling it sent the fans down to a medium hum, with no noticeable difference to the visuals. In either mode, there are no performance issues or lag, it’s all nice and smooth.

There are no graphics options in-game, you have to set your fullscreen/window/resolution options on the opening Unity dialog. Fine by me, just thought you should know.

Background music is pretty good, there are electro melodies that change every so often. I left it on, which is always a good sign. 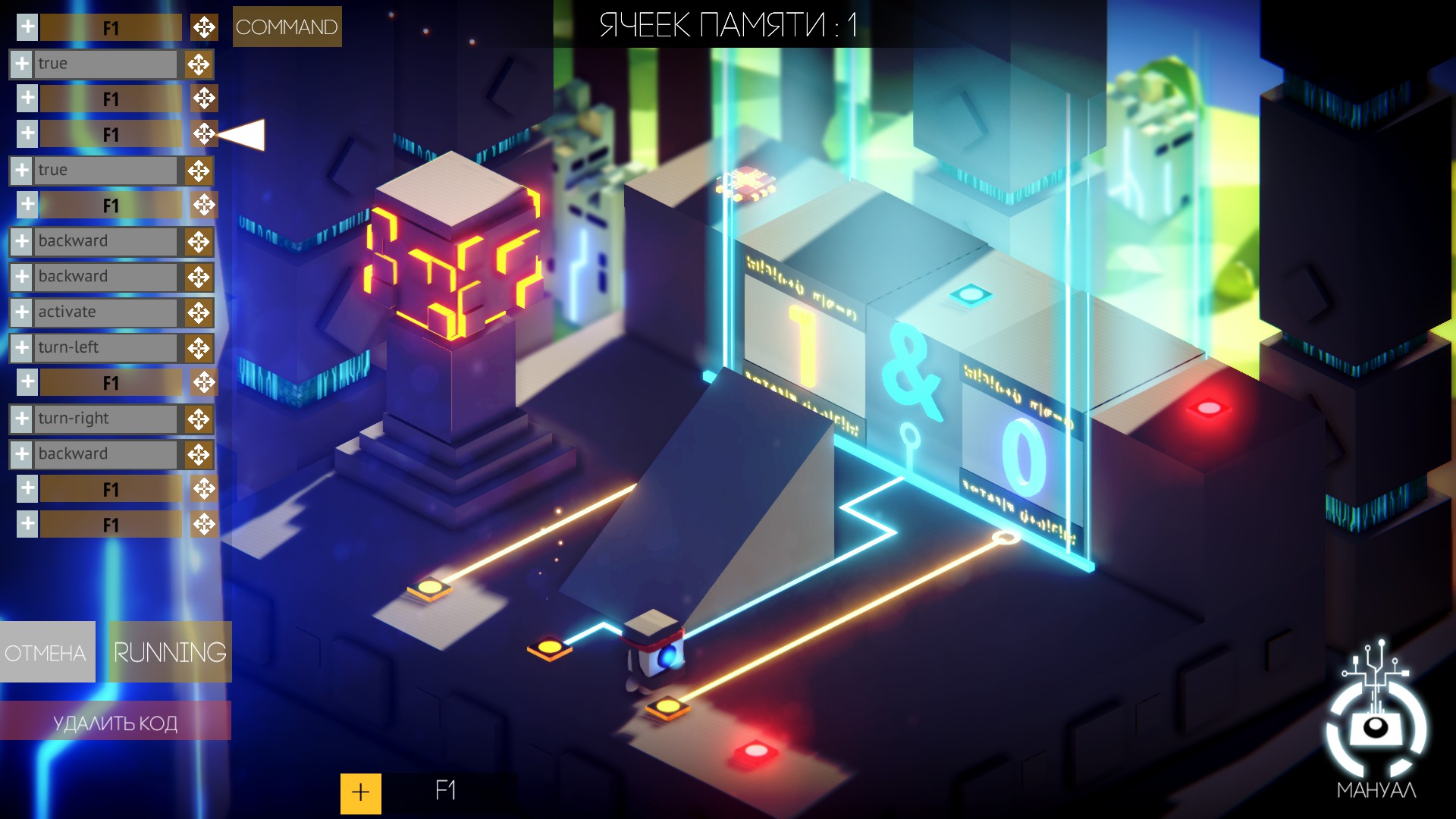 It’s definitely on the easy side, but in a good way. I’ve played a fair way through it and haven’t come across any serious challenge yet. It’s a pleasant, casual type of puzzle and there’s a nice feeling of satisfaction to see your little robot perform your commands and get to the end. There is one type of puzzle that is silly though. You’re given some algebra with conditional statements for which there are multiple possible solutions, so you have to use trial and error many times to enter all the possibilities. It’s not difficult but there are too many possibilities and it becomes tedious after a while.

There is a Casual mode on the main menu but I haven’t considered trying it. This is easy enough already. 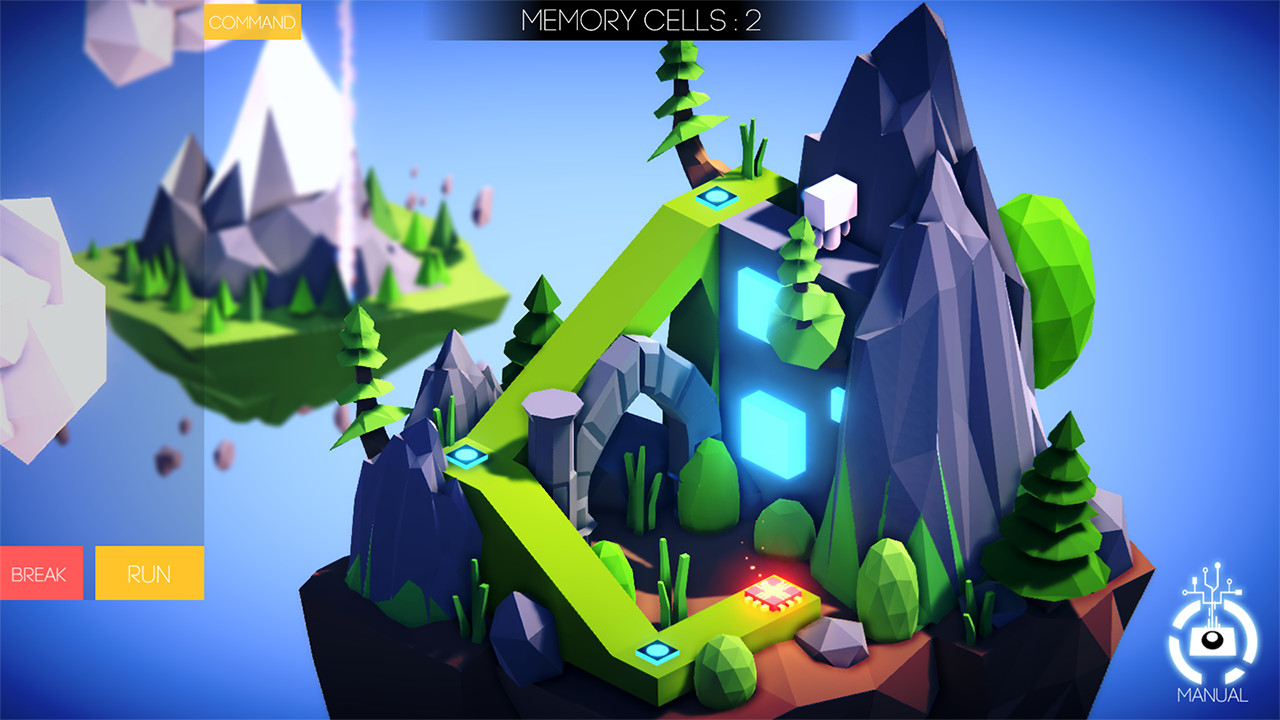 14 achivements, many of which require completing all of certain types of discovery, pickups and such. 5 trading cards (the perfect number, of course).

If you can live with the annoyances, this is actually good value. The core game has plenty of content, nice graphics and new mechanics being introduced regularly to hold your interest. If it was a bit more polished I’d recommend it at full price, but in its current state it belongs only on your Wishlist for the time being. 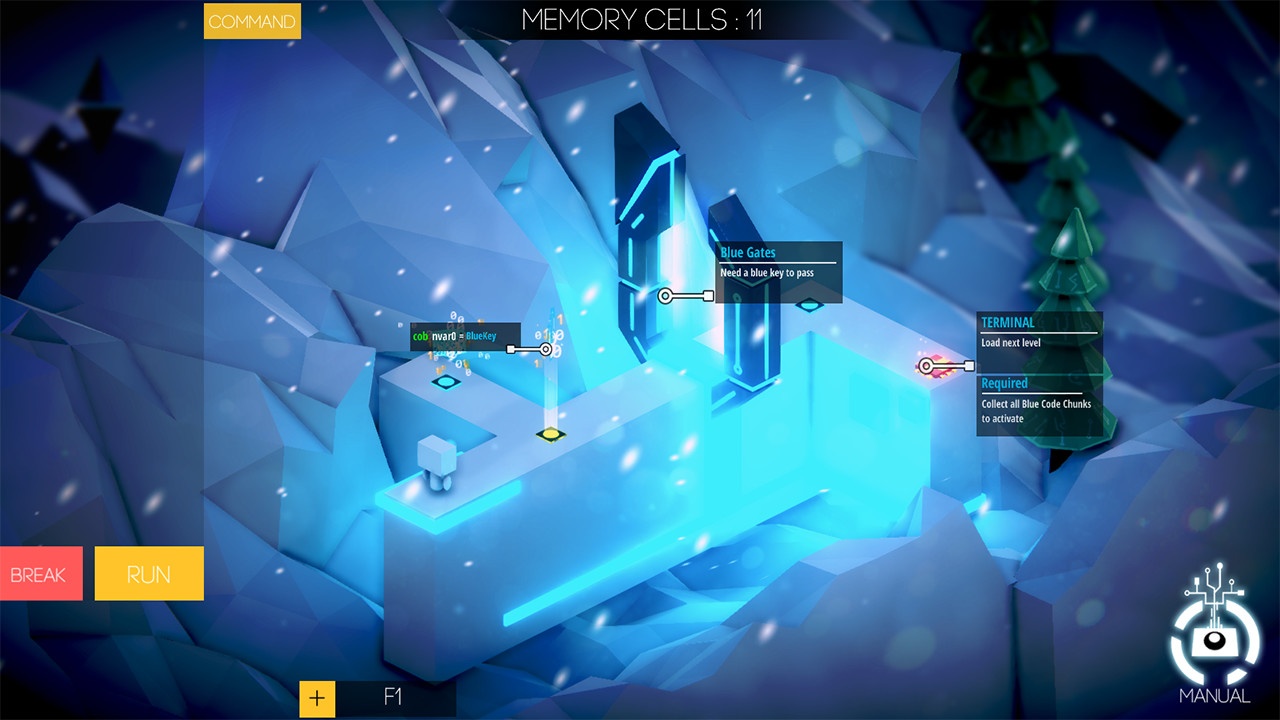 As my friend rgk would say, there’s a long queue for the complaints department here…

Before you read any further, please bear in mind that I do enjoy the actual gameplay. There are always new things to discover, upgrades to be unlocked and dialog to read. The issues I have relate to all the other stuff surrounding the gameplay. 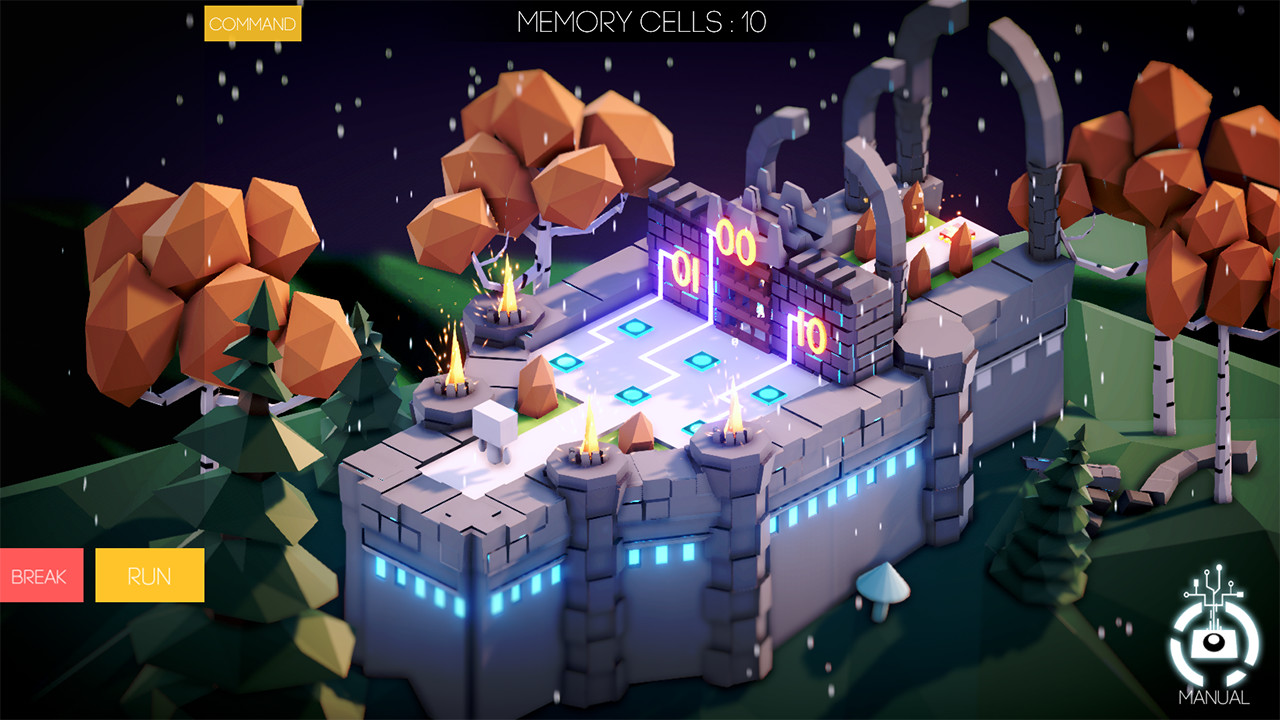 The underlying gameplay, puzzles and visuals are great, but it’s all spoiled by a litany of issues that are easy to fix. It’s in dire need of some good old-fashioned quality control. These problems may be ironed out over time (I sincerely hope so) but right at this moment it gives me a feeling of slight anger because it could be so much better. It’s like being served a delicious meal in a restaurant surrounded by cigarette smoke, bawling babies and sweaty armpits. 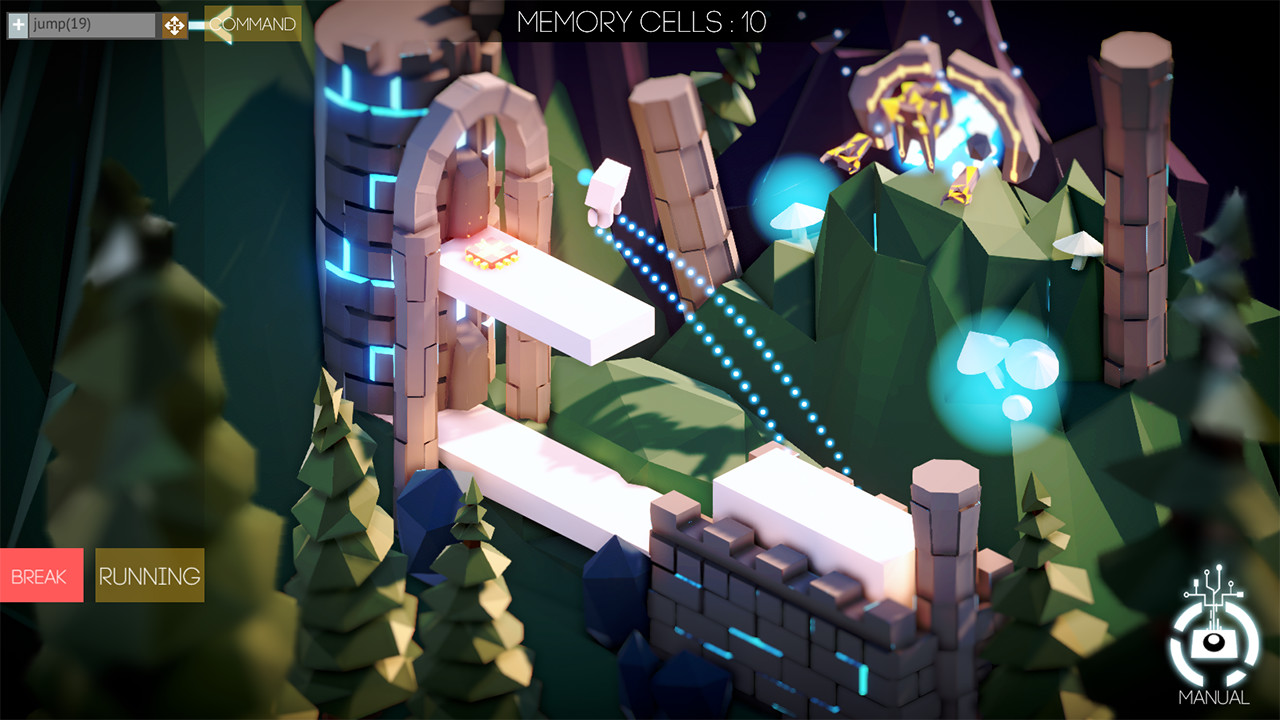