Feral Fury is a top-down twin-stick shooter with rogue-like elements.

In Feral Fury, you play a futuristic panda (yes, a panda), armed to the teeth with weapons with which you fight other creatures in your quest to take over planets for bamboo growing. 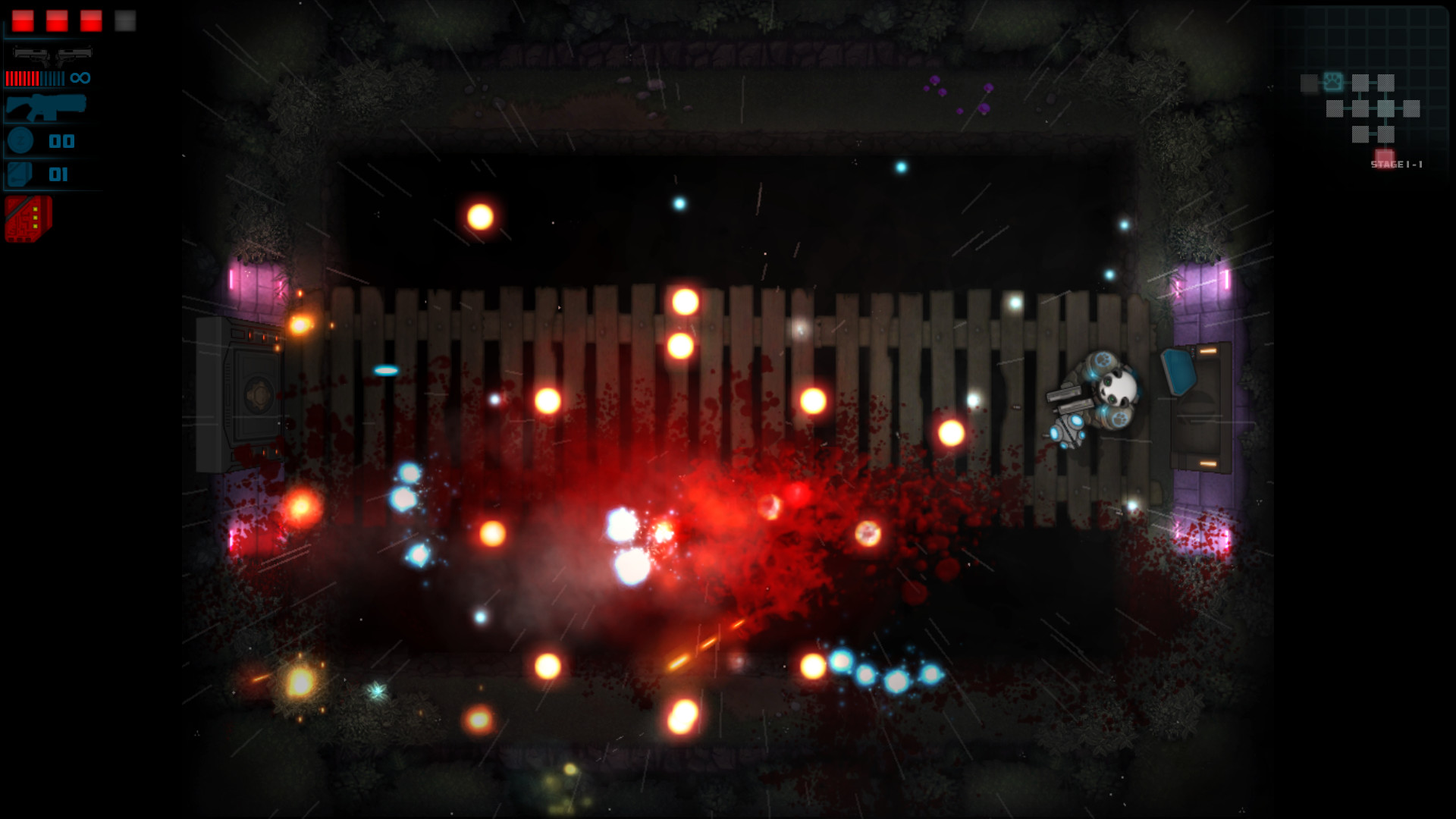 Feral Fury is viewed from overhead, which somewhat restricts the options for character and enemy art, but the developers have done a fairly good job. Your character looks like a suitably aggressive, hard-nosed panda wielding an assortment of modern and high-technology weaponry, and enemies are a good mix of mechanised and organic, with the latter seemingly either insect, alien, or fluffy-Earth-creature based.

The stages each have a different feel to them; though most rooms are indoors, they range from a futuristic bunker sort of vibe, through to alien-infested tunnels. The occasional outdoor ‘room’ adds a little bit of welcome variation, too.

Everything looks fairly good, but it all moves a bit too slowly. Weapon effects feel a bit flat, but the game does have nice explosions. The car level looks quite nice, too.

There are no graphics options whatsoever, including no ability to set resolution or windowed/full-screen mode from the game UI (alt-enter doesn’t work either). I haven’t seen any slowdowns or other performance issues. 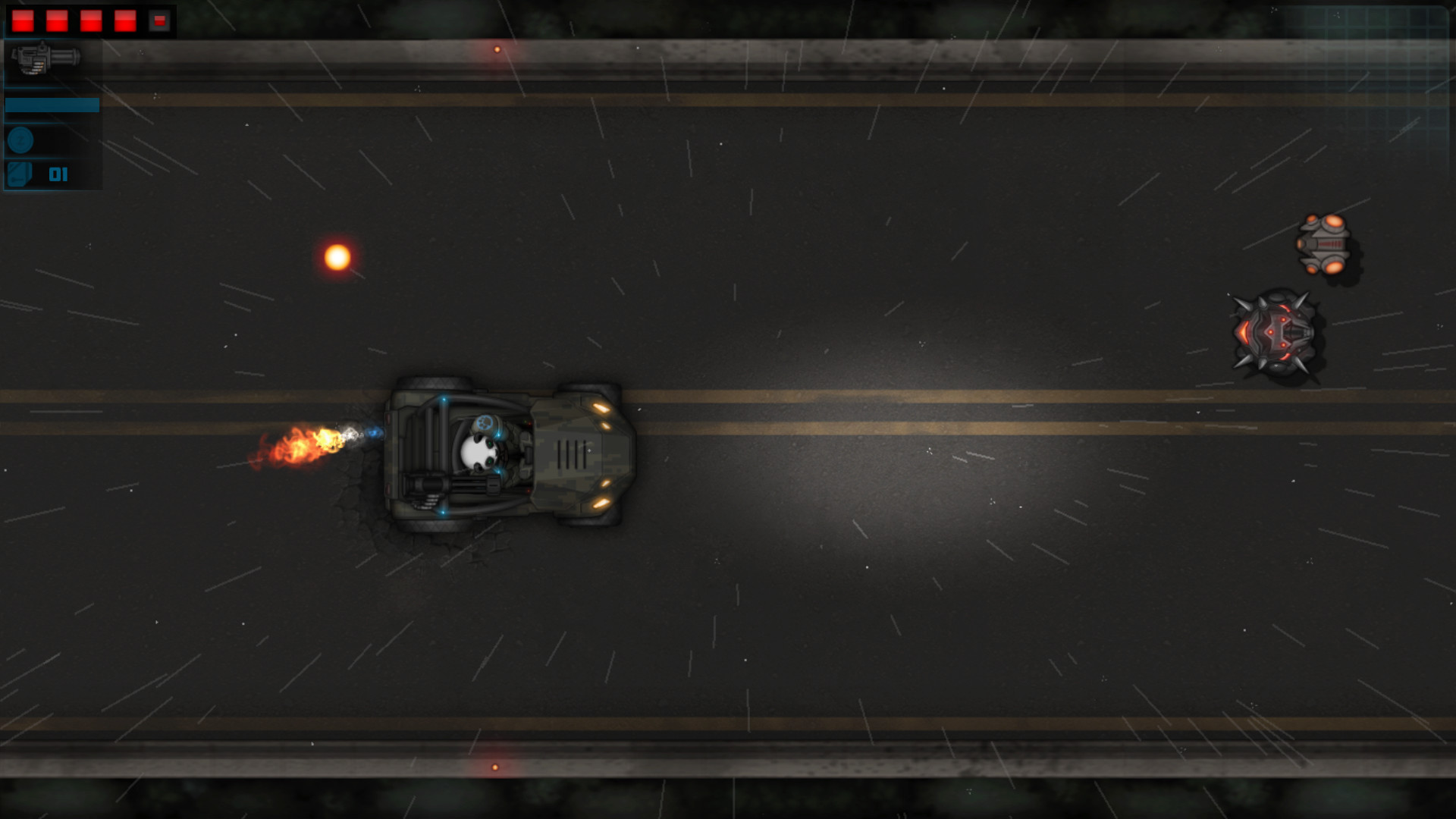 Music is a bit dull and gets very repetitive after a few games. It’s a minimalist slow techno beat and it’s not bad, exactly, but it just doesn’t really grab me either, at least not after listening to it for hours at a time.

Sound effects are acceptable, but tend to get overridden by the music on default volumes. Don’t depend on sound to tell you when you’re taking damage; the visual flashing indication on screen is much easier to detect.

I don’t think there are any voices.

Feral Fury is a twin-stick shooter with full controller support, but from my experience it’s actually more fun to play with mouse and keyboard. This isn’t unusual for the genre. As is typical, left stick or WASD controls your character, and right stick or mouse controls aiming his weapon, with appropriate buttons available for shooting, dodging/rolling, and setting dynamite (Feral Fury’s version of a special attack/bomb). There’s also a button for ‘holo power’, which lets you use special holographic powers, but I’ve only managed to ever use this once — the powers are quite rare and they have to be charged up before you can use them.

Each stage of the game is made up of four procedurally generated, room-based levels. The starting room on each level never has any enemies, but you leave by one of the doors into another room, the contents of which are revealed when you enter, and the enemies in each room after the first are procedurally spawned. Once you enter a room, you’re locked in until you kill all of the enemies. At that point, the doors open and you can move on to the next. A special red key is dropped once per level, allowing you to unlock a red force field thingy and move on to the next level. There’s a boss fight at the end of every stage.

When you first start the game, you character moves very slowly and the controls feel extremely sluggish. It’s a poor introduction to the game and it was an immediate turn off; I wasn’t looking forward to playing such a clunky twin-stick shooter. After a couple of speed upgrades, though, your panda moves along at a much better rate and the controls loosen up a bit, making the game much more fun after the first hour or so.

There’s also a weird side-scrolling car-based shooting level that you can do after completing a boss fight. It’s optional, with the only benefit being a few loot-containing boxes to blast open at the end, but it does provide an opportunity to break up the twin-stick action with a minigame. Unfortunately it falls a bit flat, with sluggish controls and very basic action.

There’s another minigame in there, too, in the form of an old-skool Space Invaders – style shooter in an arcade machine cabinet in the in-game shops. It’s a fun distraction for another few minutes, but doesn’t really offer much more entertainment than that. 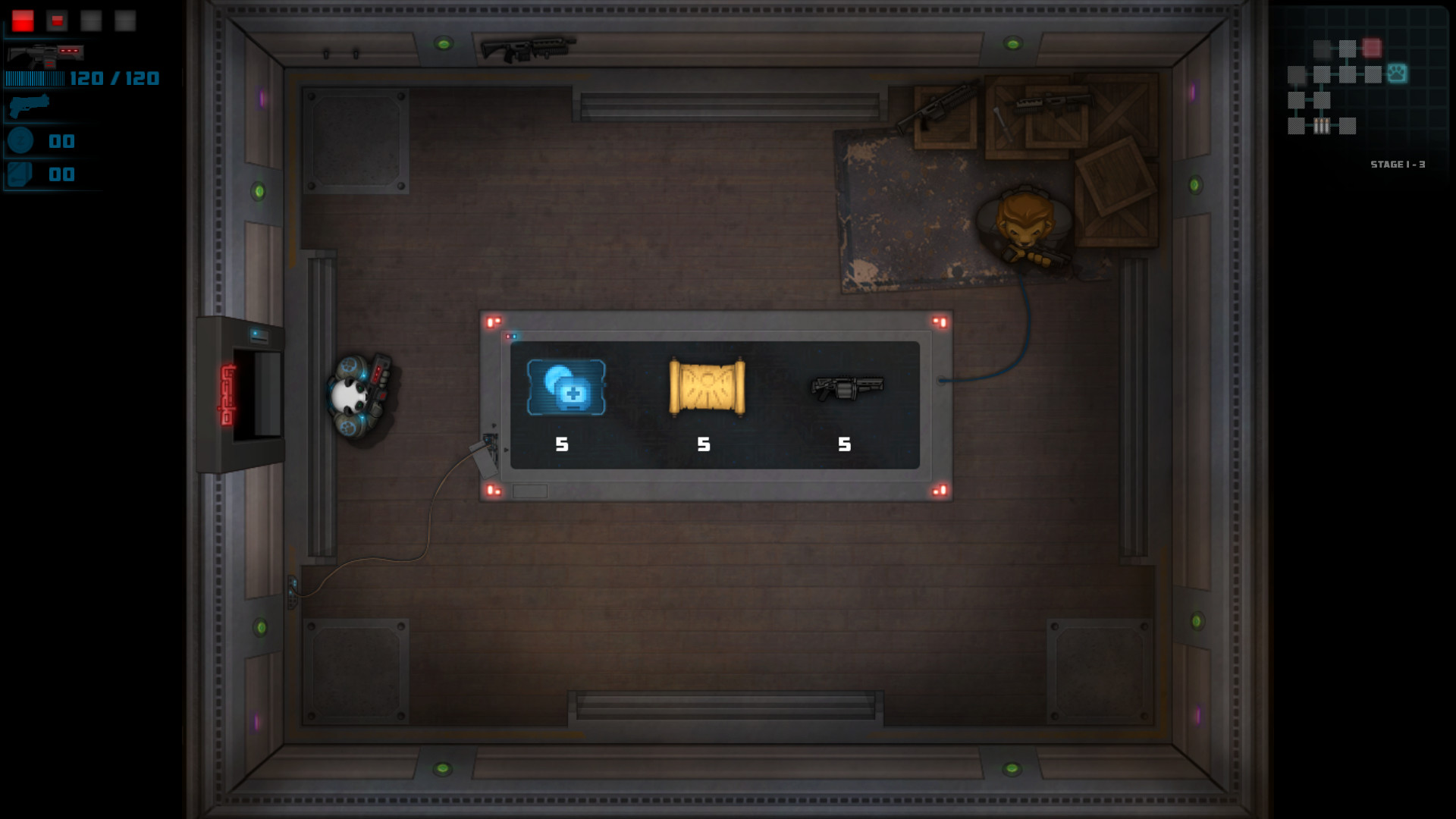 In my opinion, the best addition that Feral Fury makes to the genre is the ‘Daily Seed Game’: a game in which the random seed is set the same for everyone, and changes each day, and which you only get once chance at each day. It saves your high score and displays how you’ve performed compared to other players, adding a bit more excitement and some competitiveness into the game. It’s implemented well and you can’t really blame bad luck for poor performance, since the random number generator seed is the same for you as everybody else.

Unfortunately, though, there’s just not enough variation in Feral Fury to prevent feeling as though you’ve seen it all before when you’re working your way through the levels yet again. Games with rogue-like elements such as permadeath and procedural level generation need to have enough variability to keep feeling fresh, game after game after game, and Feral Fury doesn’t quite get there. The permanent upgrades that you can buy are okay as far as they go, but they don’t go far enough. Similarly, the handful of weapons you can find are welcome, but with no upgrades or other improvements available, they don’t make enough of a long-term difference.

In a few hours’ play I’ve completed the game on easy mode and made a good number of attempts on normal difficulty. Importantly, though, in that time I’ve unlocked about half of the permanent improvements available, and only one of the remaining ones really sparks much interest: the medallion, which has a hidden effect.

With no tutorial or instructions, either, I’m still not entirely sure what some of the game elements do or mean in terms of the story. The game could really do with a one-level optional tutorial or at least a help page explaining some of the game elements like why you want to collect the glowing blue energy stuff that enemies drop, what you do with coins, and what it means for you when you get injected by stuff that supposedly improves your abilities, but turns one of your health indicators blue. I think I worked most of it out in a couple of hours’ play, but I’m just not sure. 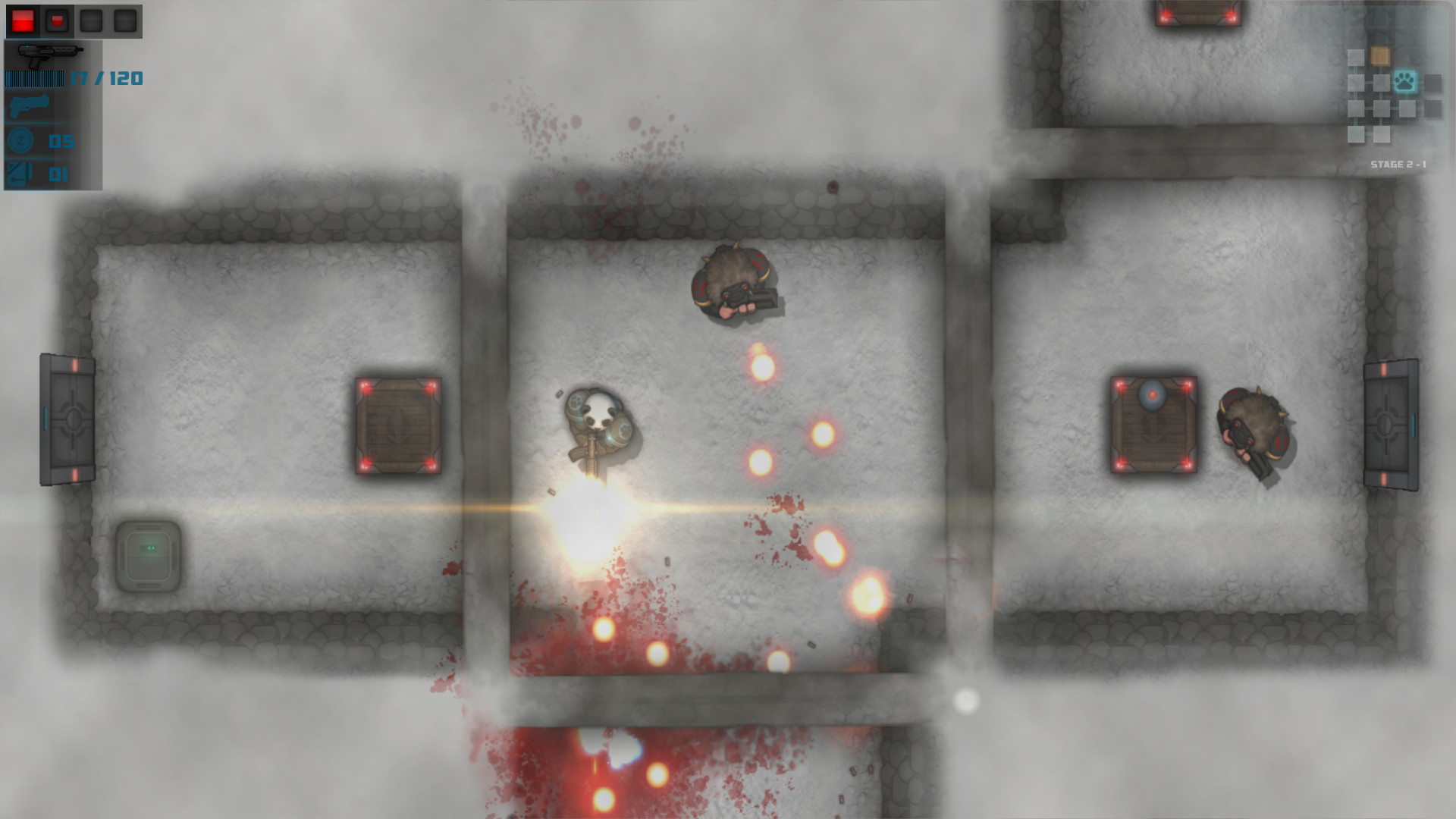 Cons:
– Controls are a bit clunky, especially when you first start
– Explosive enemies are annoying
– Not enough variation in upgrades, enemies, weapons, …

Given the similarities, with both games being science fiction twin-stick shooters with rogue-like elements, it’s hard to not compare Feral Fury to last year’s Neon Chrome. Unfortunately, Feral Fury loses out in that comparison in almost every way. It’s a good game in its own right; it’s just not quite as good as I was hoping.