REVIEW: The Signal From Tölva

An indie Stalker-like experience with robots.

The Signal From Tölva is a first-person shooter set on a remote planet populated by machines. A strange signal has been beamed from the ground and the player, located in a spaceship above the surface, hacks into the local population of robots to investigate the place.

Hacking into robots is an elegant way to say “whenever you die, you can respawn in another robot”. Thus, there are no quicksaves, only respawn locations to carry on from a previously unlocked spot of your choosing. But you might be asking yourself, are these respawning locations in considerate locations, or very far from where your last death occurred? And here things start to get interesting. The surface of Tölva is more or less an open world, and I need to tell you that I really do not enjoy open-world games or respawn positions far from the action. And yet, my usual gripes with the concept were wholly erased in Tölva, for four simple reasons.

First, the starting point is in the bottom left corner of the map. There are a few linear ravines to go through, and they effectively work as a tutorial to ease the player into the game. And then the paths open up, but the mountain chains split in ways that funnel the player in certain directions without getting lost. Then, when consulting the map, with a simple right click it is possible to set a waypoint and have it appear as a guide on the HUD. 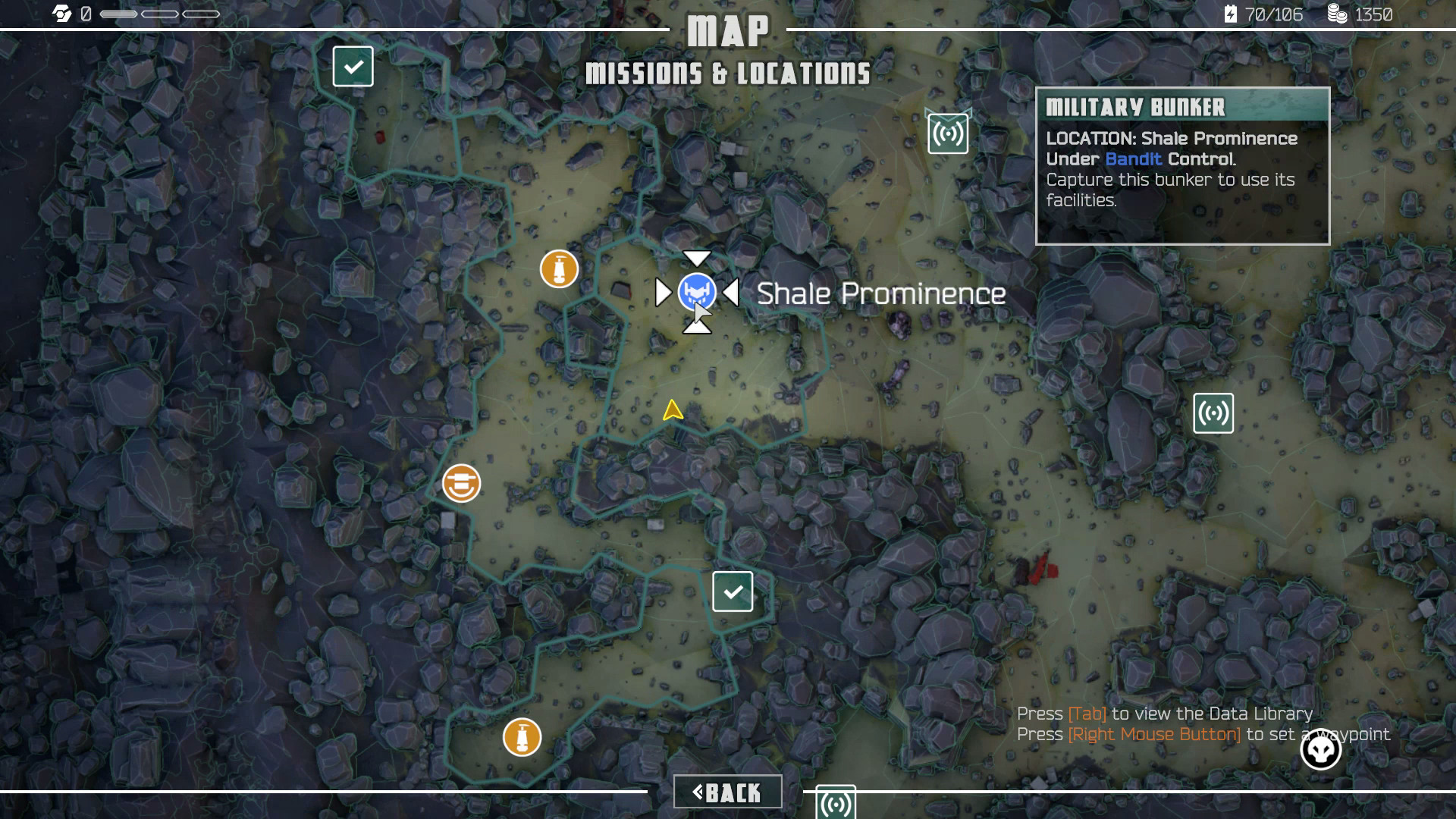 Second, there are a few icons on the map to show important areas such as bunkers and signal locations, but not everything is displayed and exploring the planet allows you to discover new locations. This is done in a very subtle way, as the big landmarks give a reason to go somewhere, and then some additional points of interest pop up along the way.

Third, the player is part of a faction and it is possible to claim bunkers and respawn positions from the other factions, effectively allowing for a front line position, and constantly letting the player decide where to set up a base for further exploration. The location of all the points of interest is just right: not too far from each other, so that it would take ages to travel back, but not too close, so that a little trekking and binocular reconnaissance is necessary to assess the situation.

Fourth, the late-game areas are placed in a very obvious way: the game starts in the bottom left and ends in the top right. At the beginning there are no location markers in late-game areas, so a starting player has no incentive to visit them, and there are radiation zones that require you to have stayed in the previous area long enough to upgrade your equipment.

All of these together mix into a very elegant open-world design. The left corner start gives a direction, the ravines funnel into specific areas with their own challenges, the map gives incentive to travel in certain directions, the areas themselves have surprises that keep you engaged in exploration as well as aware of your surroundings at all times, and the dangerous areas are blocked off in smart ways. Once again, I don’t like open worlds and yet I enjoyed progressing through Tölva. 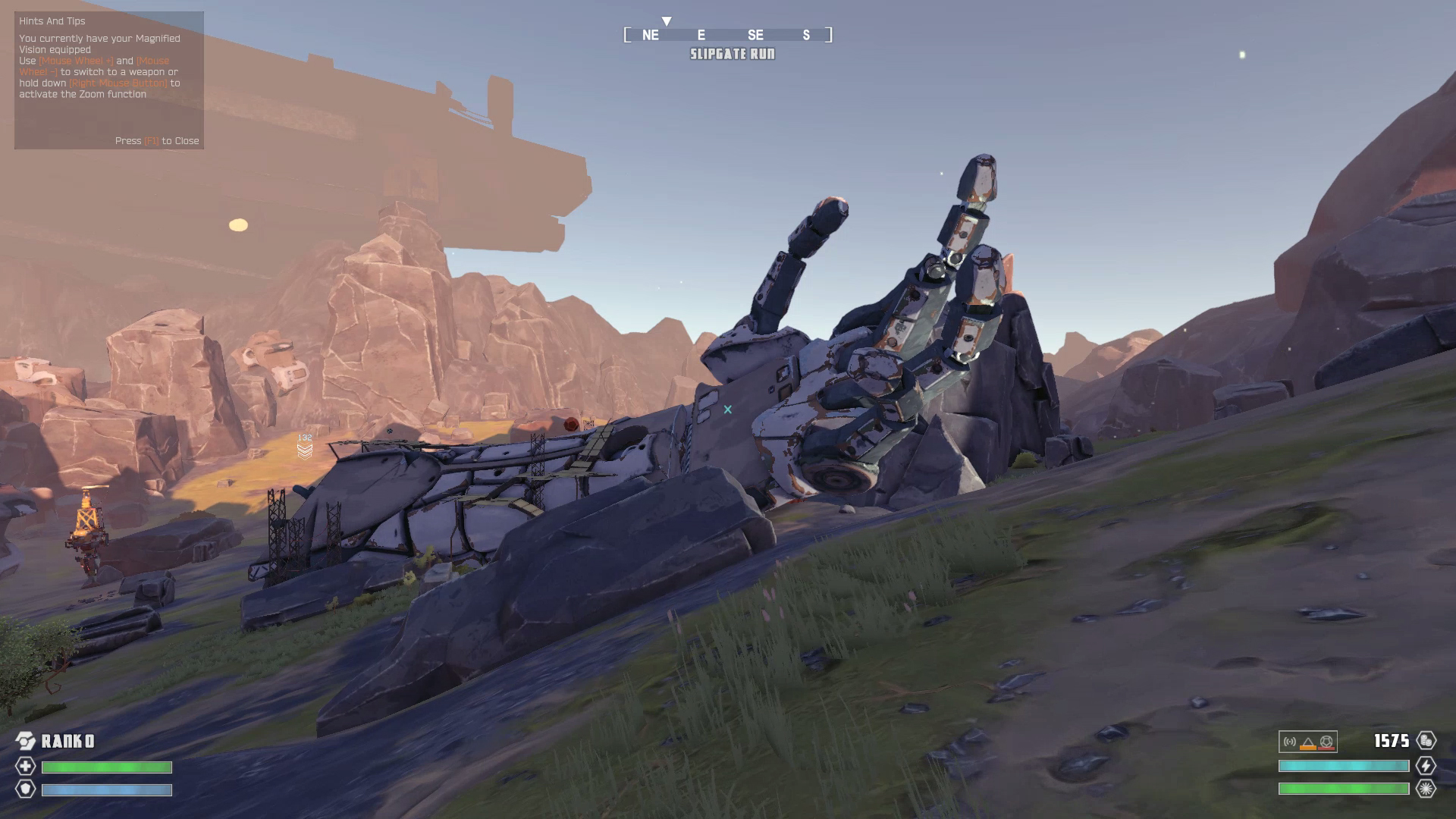 There are a few elements in the game that give a Stalker vibe. Besides the radiation zones, the signals to collect remind me of Stalker anomalies. There is a vast arsenal of similar weapons that are upgraded versions of the lower tier ones, giving some sort of RPG-like progression. New weapons and armour levels are unlocked primarily by collecting signals, so I am sure it is possible to progress far into the game without being a killing machine. In a sense, the dangerous remote wasteland gives a feeling of desolation: ruins of a previous civilization, derelict spaceships and machines, rusted abandoned robot chassis, and distorted vision. The atmosphere of Tölva is beautiful and gripping, and quickly caught me.

I guess it’s about time to talk about the negatives, especially considering that I just mentioned Stalker. The mutants and uncertainties of the Zone gave a strong sense of foreboding, a fear of the unknown, and a tension regarding the kind of scary monstrosities that could have been borne out of Chernobyl’s radiation. Tölva features robots. It is hard to feel the same impact for some dusty old tin cans. It is my belief that going for robots is both a strength and weakness for Tölva. It’s a weakness because it removes the visceral fear that organic monstrosities usually provide, as well as more questions about conditions on Tölva. I did not manage to connect with the deeper story and the written notes provided with the signals to collect. The fact that the messages were basically always repeating the same thing perhaps didn’t help. And then the choice of robots is a strength, because it allows the developers to hide many limitations of the game (this is a small indie team after all), and provides justification for the rest of the game’s design choices. And as I mentioned earlier, Tölva truly benefits from an elegant game design. 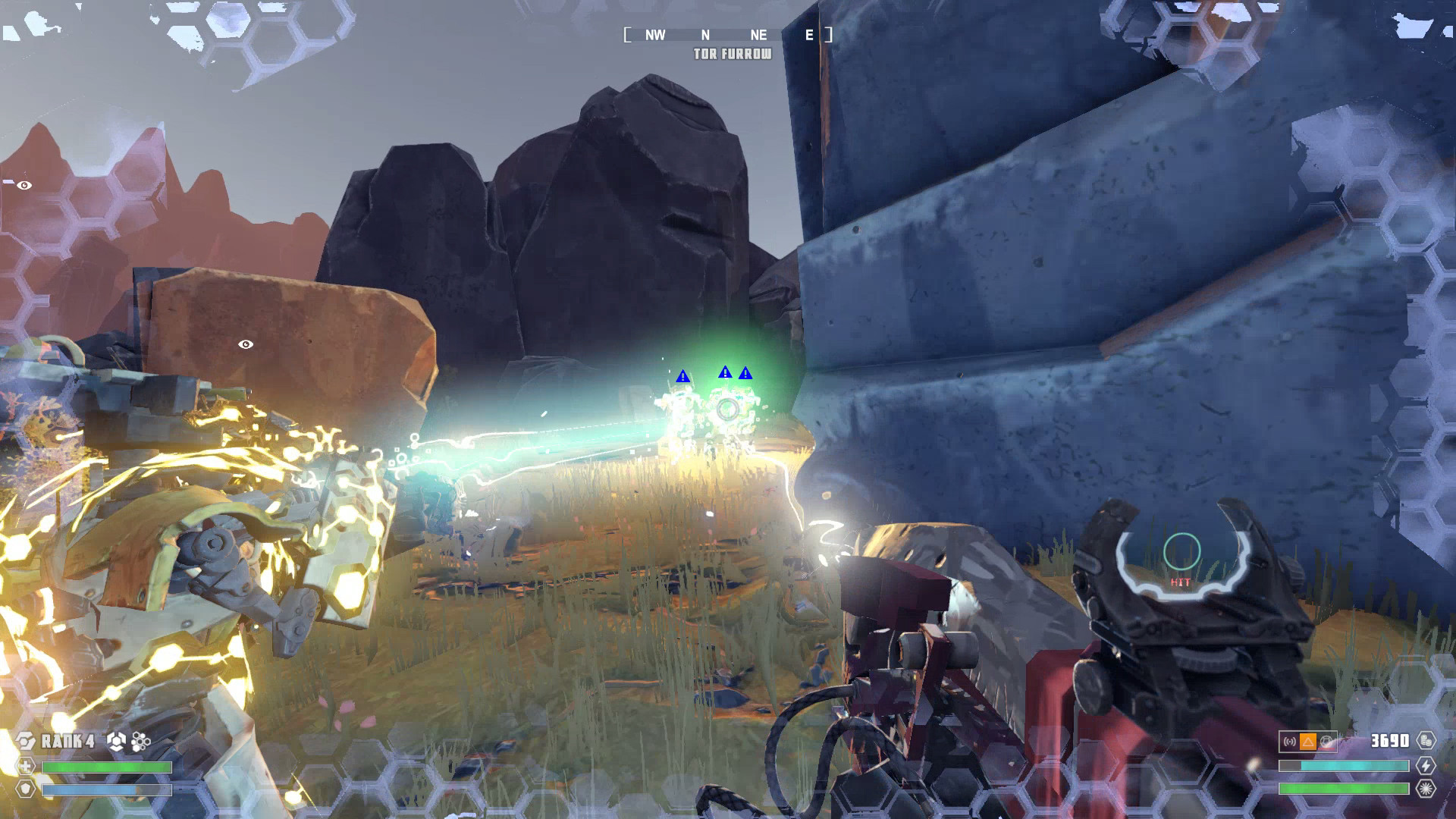 This is a First Person Shooter, so you might have been wondering why I have not talked about combat. Maybe I have been trying to stall you, funnel you into seeing what I like about the game before talking about the weaker parts, and also letting time for the robots concept to sink in. I won’t linger on the technical side of things, because Tölva does everything right. All the keys are reconfigurable, the game runs smoothly, and there is a field of view slider. Now onto the shooting bits.

There are several types of weapons, from long-distance sniper rifles to close-quarters assault rifles. There is also a melee attack, but besides unlocking one achievement it is absolutely as useless as it looks, which is a shame because I would have enjoyed some mechanical brawling ending in ripping apart my opponent. The sniper rifles are very powerful, but quite slow. Aiming for the head is an absolute necessity for dispatching an enemy efficiently, because the rest of the squad won’t take too long to flank you.

The AI is actually a positive component of the game, as most enemies are grouped into squads, with some snipers that stay behind and flankers that flush you out from hiding. Enemies seem to benefit from the same equipment as you, too, so soon enough there are robots equipped with auto-regenerating shields just like you. Ouch! Getting rid of an enemy squad is a really difficult affair for players that are not very good at first-person shooters. For a veteran player, it’s a matter of scouting the members of the squad to tag them on the HUD — there’s nothing more dangerous than an unmarked team sneaking up on you from multiple positions — then finding a location with good cover, popping out a few sniper shots from a distance, and finishing up the survivors with an assault rifle. Whatever happens, though, don’t get caught reloading, because it takes ages and, with the two-weapon carry limit, makes sure that you’re being tactical rather than rash, Serious-Sam-style. 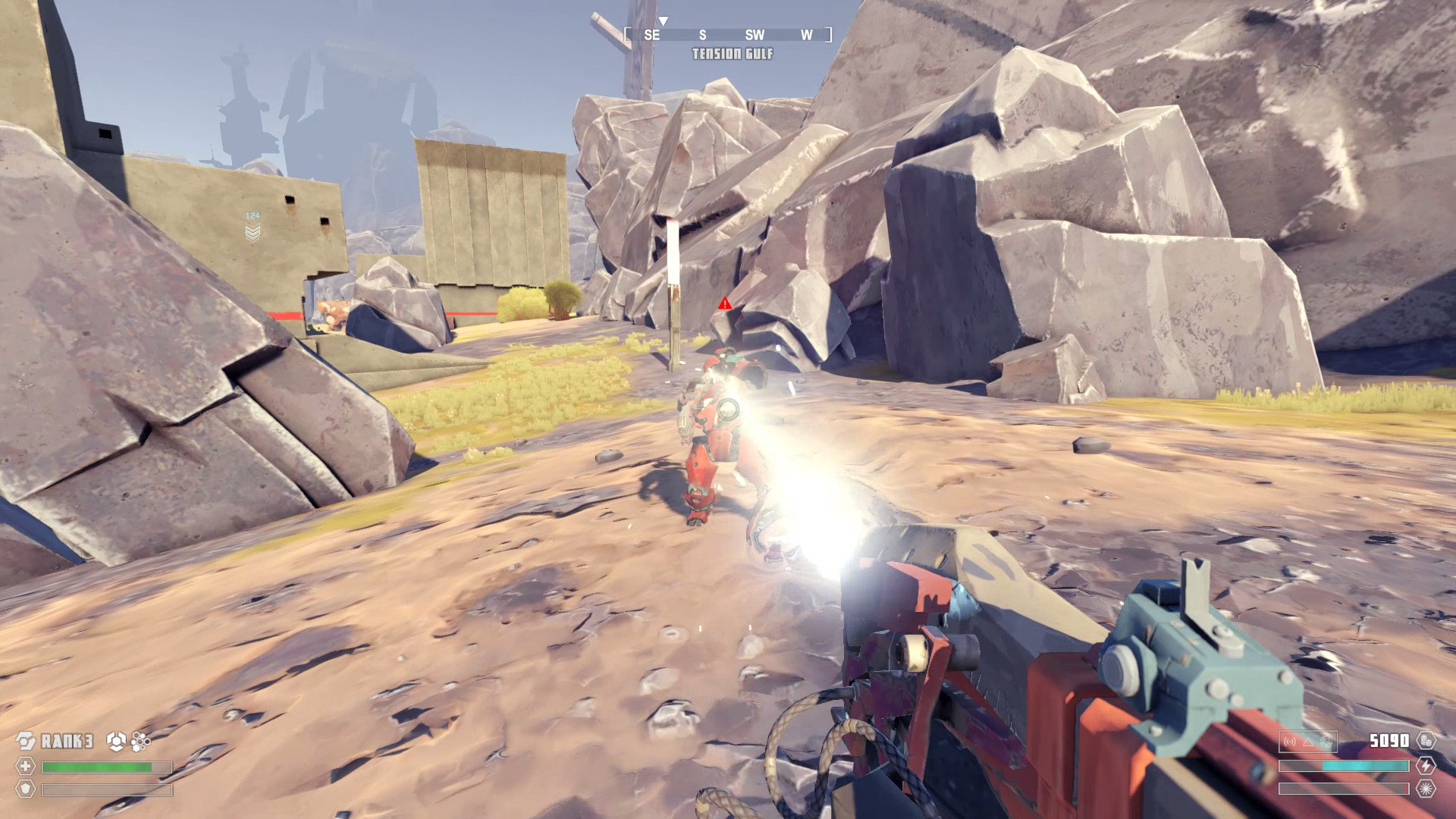 Although the effects and sounds of the weapons can be incredible — you can hear the rumble of the sniper shot shaking the air of the whole valley — the gunfights do not feel all that satisfying from a visual and spatial point of view. Besides a final satisfying headshot that pops the head off in an elliptic arc, there is no gore to give feedback to your shots, and movements overall are quite stiff: the enemy robots do not roll or anything; they just stand as if a mechanical broom was stuck in their bolted posterior. Strangely, fighting in Tölva brought back memories of MechWarrior 2: very stiff. Still, I enjoyed the combat because it was difficult and deadly, and required quick tactical wits as well as a good aim.

I truly had great moments playing this game. It is a rare experience to take part in a non-scripted emergent gameplay scenario of being caught in the middle of a three-way skirmish. Let me tell you how this happened. I wanted to capture a bunker from the blue team, and had almost managed to wipe them out when an assault squad from the red team appeared and started shooting. Blue team reinforcements arrived and I was caught in between the two until I found my way to the inner courtyard of the bunker. That is when a dropship landed next to me and with its sustained fire I was forced to hide right where the red team was about to respawn new robots. Some patrolling robots from the yellow team (mine) heard the shooting and decided to help me. They finished off the dropship and flanked the red robots that had cornered me. The game had gone through a day-night cycle during the whole operation, and I felt ravished by the whole encounter. 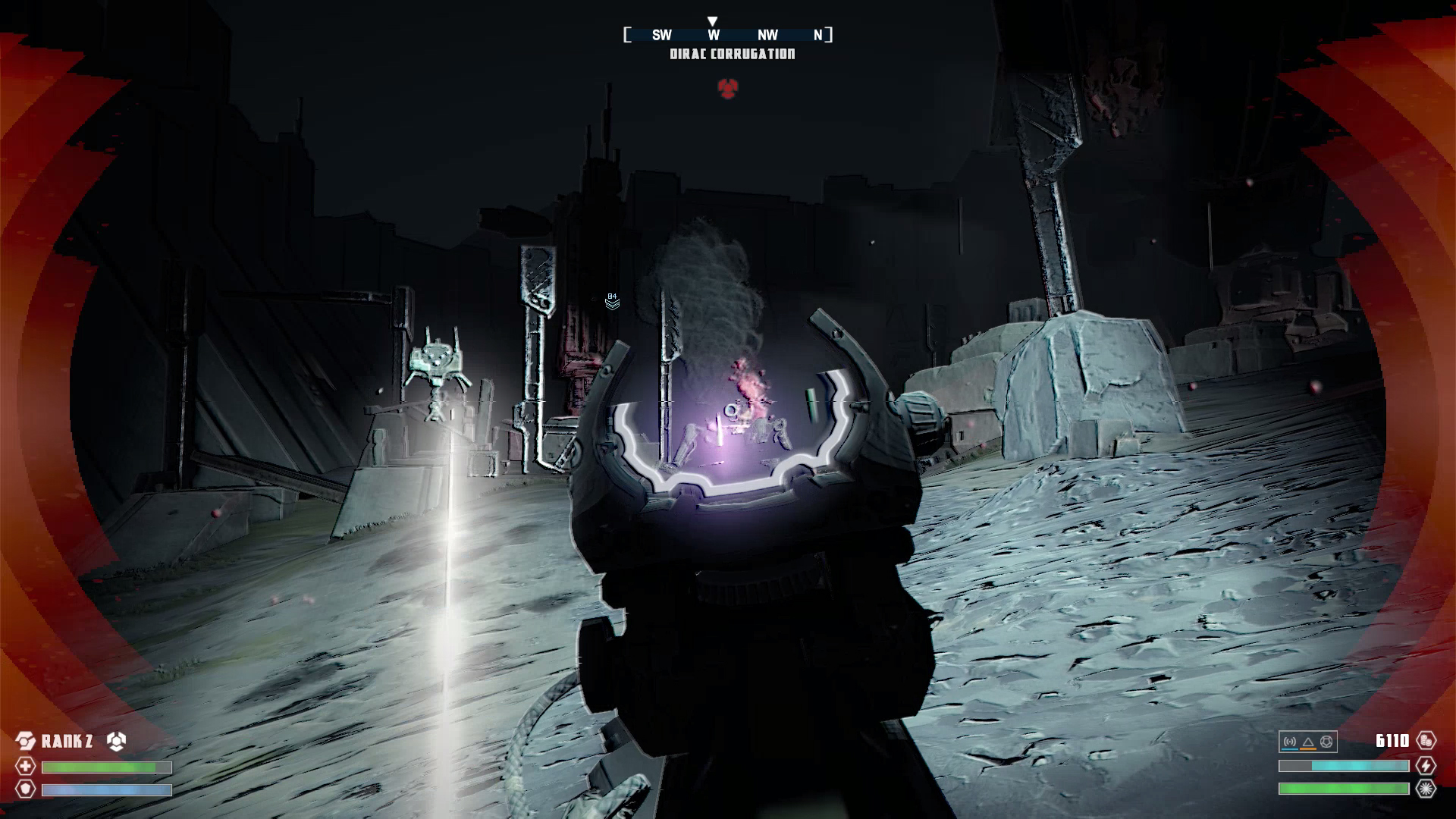 One gripe I had with the combat was the lack of variety in the enemies. While there are three factions waging war on the surface, all the robots basically look the same except for their color. There are no weird crawlers, no jump-jet mosquitoes that come and bite you from behind, and no huge beasts. Some variety finally starts to pop-up later in the game, in the form of buzzing drones and dropships that act as laser turrets, but it might be too little too late.

There is a gun-like device to control allied robots, but it is a bit fiddly to use and the allied robots die too quickly to be worth occupying a rifle slot. This might be the only non-elegant design decision of this game, as it would have made much more sense to instead replace the (useless) pistol. This weird decision is at least compensated for by the fact that the player starts the game with one of the long-distance rifles, making the beginning enjoyable rather than how some games are a drag until finally a good weapon is equipped. 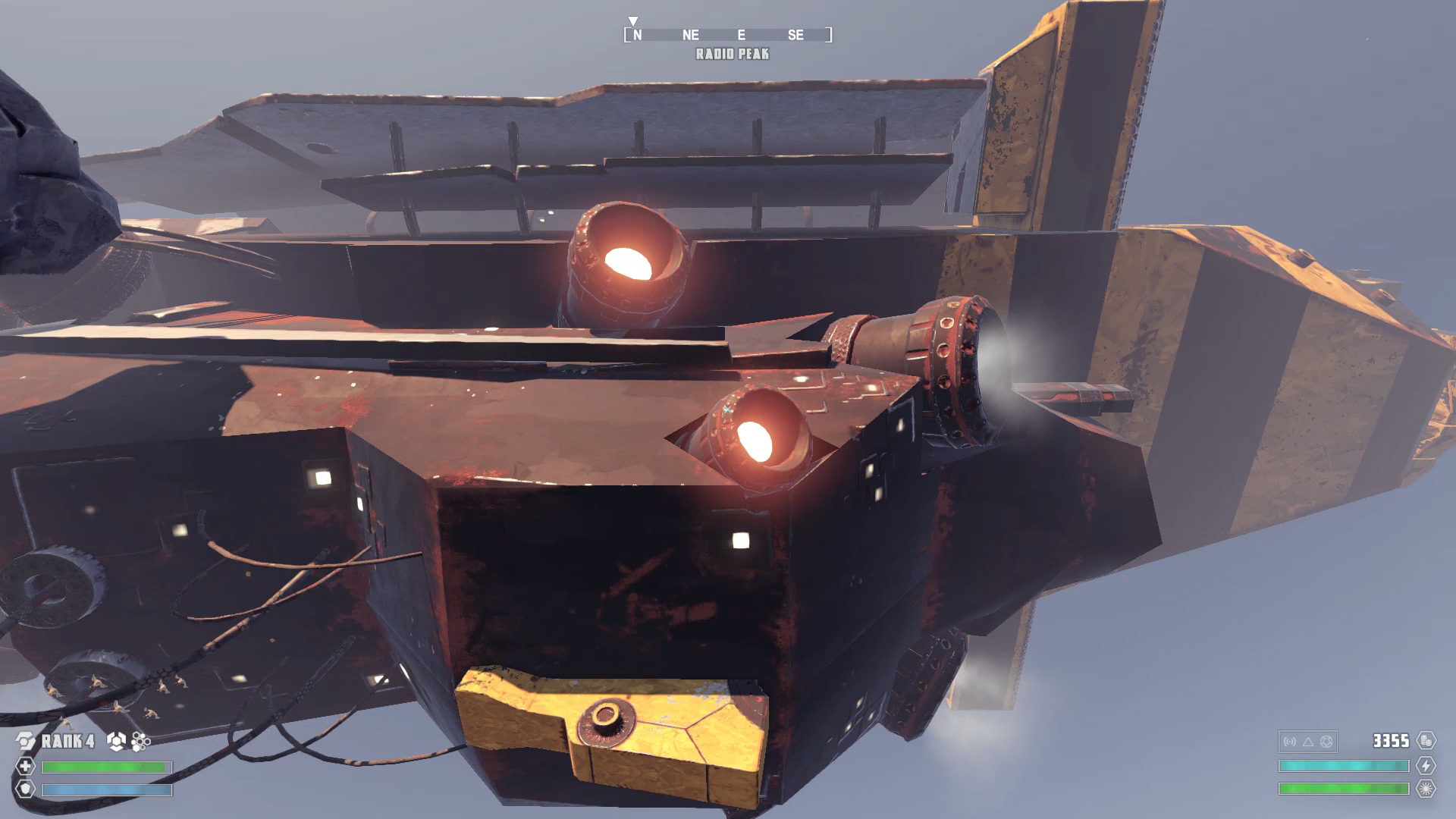 This has been quite a long review. I hope I have managed to convey how everything in this game, the good and bad, can be explained in one word: ROBOTS. More seriously, yes there are open-world FPS games with more explosions and crazier shooting; yes, The Signal From Tölva can be very dry and stiff; yes the story is not exciting; and yes it has some shortcomings. But despite all of this, each time I had to stop playing all I could think about was when would be the next time I could return to the surface of Tölva and expand the borders of my territory by capturing bunkers and exploring uncharted areas. For an open-world game to grab me in such a way is very admirable, and I pin it on the absolute elegance of the game design that lets me be the master of my own adventure, while subtly guiding me instead of overwhelming me or losing me.