Quarantine is a turn-based, strategy, simulation game. The title was developed by Sproing and published by 505 Games.

The game plays similarly to the board game; “Pandemic” and even shares the same theme. The player takes control of the director of Pandemic Defence; an international bio-security agency tasked with taking on pathogens across the world.

The graphical assets of the game are well done. The character portraits as well as the random event cards look great, and the 2D art-style of the game is very reminiscent to that of a board game. That being said, this also means that there are little to no animations or effects, and although the art is nice, there isn’t a whole lot of it within the game. The title should run fine on any low – mid-tier GPU and CPU as it is not that demanding.

The sound assets of the game are pretty well done. The in-game music gives a great sense of urgency to the game-play, and is very fitting for the game’s theme. There is some minor voice acting within the game that is surprisingly well done. The sound assets do unfortunately suffer from the same issue as the graphics; there just isn’t enough of it. 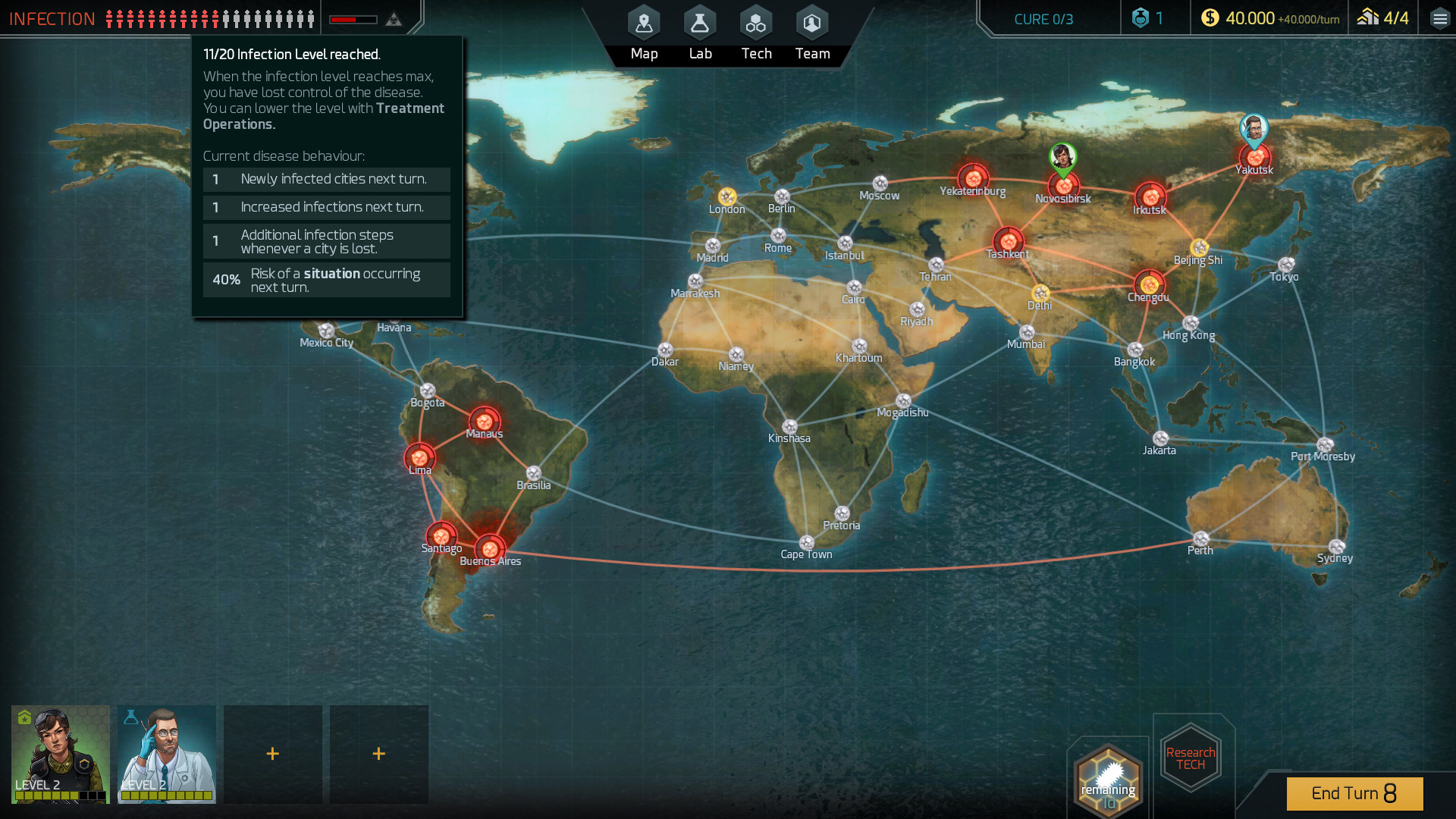 The title has a good set of core game-play mechanics, but lacks some depth. Although the game is solid, it feels as though there should be more to it.

The game is played in scenarios. The player will choose their scene and difficulty as well as their starting area and unit. The objective of the game to stop and contain the outbreak of a disease. To do this, the player will be able to hire agents that can; quarantine cities to prevent the spread of the disease, heal and reduce the infection meter of a city, build offices in cities that generate income, and collect samples from a pathogen to help with research. Each unit has its own speciality which give bonuses to performing certain tasks. These units can also level up to better perform their actions, but can also take damage when performing said actions. Units can only take one action per turn and have a predetermined set of movements and hit points that is shown when hiring them.

The rate at which the disease spreads and grows is dependant on the type of pathogen and difficulty chosen at the beginning of the scenario. Diseases can move from city to city. The game is over once the disease takes over enough of the map or if the player is able research or find a cure. A cure can be found by collecting enough samples and using them to create antibodies.

The game can become quite hectic quickly if the pathogen spreads too much and the player’s units can not keep up with it. There’s a lot of strategy involved with unit placement and in which areas to quarantine. There is a skill tree that consists of upgrades that can aid the player, though these take time to research and also carry a lot of thought in which enhancements to research at which times. 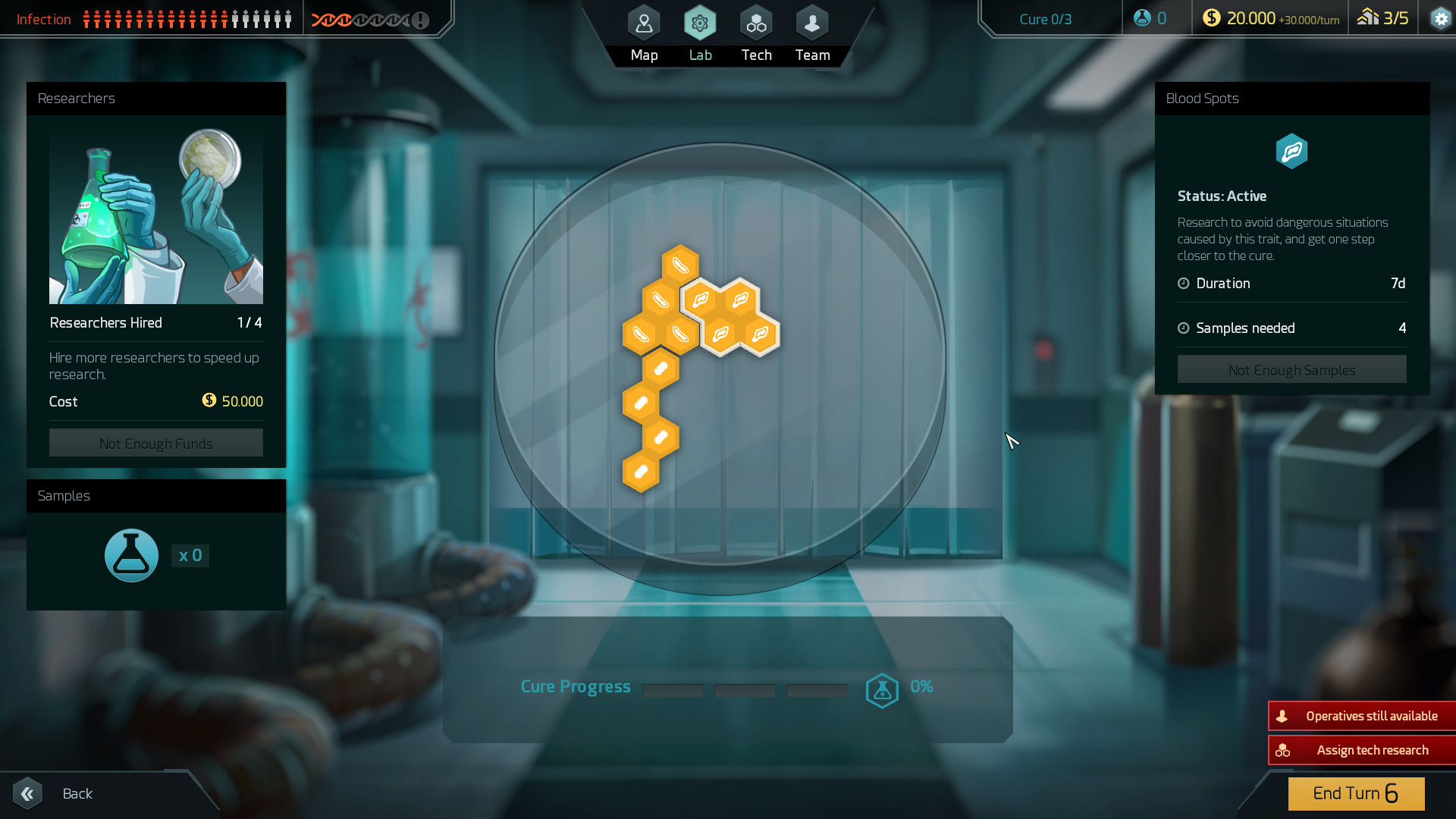 The game has very good core mechanics, and very much reminds me of the “Pandemic” board game series. Unfortunately, with just the core mechanics, the game feels a bit lacking. There are random events that can happen to spice things up a little bit while playing, otherwise it’s a very straight forward title. I am aware that the title is in early access and that the devs plan on releasing a lot more scenarios and content for the game. I do believe that the game has a lot of potential and plenty of room to grow. It’s just at the moment, there isn’t a whole lot of depth to the game. All the scenarios can be completed in about two or three hours.

The main difference between the table top game; “Pandemic” and this digital title is that; Quarantine is a single player title. The game gets a lot more hectic with other people involved. Communicating with others and combining a team’s effort, is what makes the board game a lot of fun. If multiplayer was implemented into this title, I’m sure it would make the game a lot more interesting.

Thanks to the devs and publisher for giving me the opportunity to review the title, as well as anyone who took this review into consideration, I hope it helped. 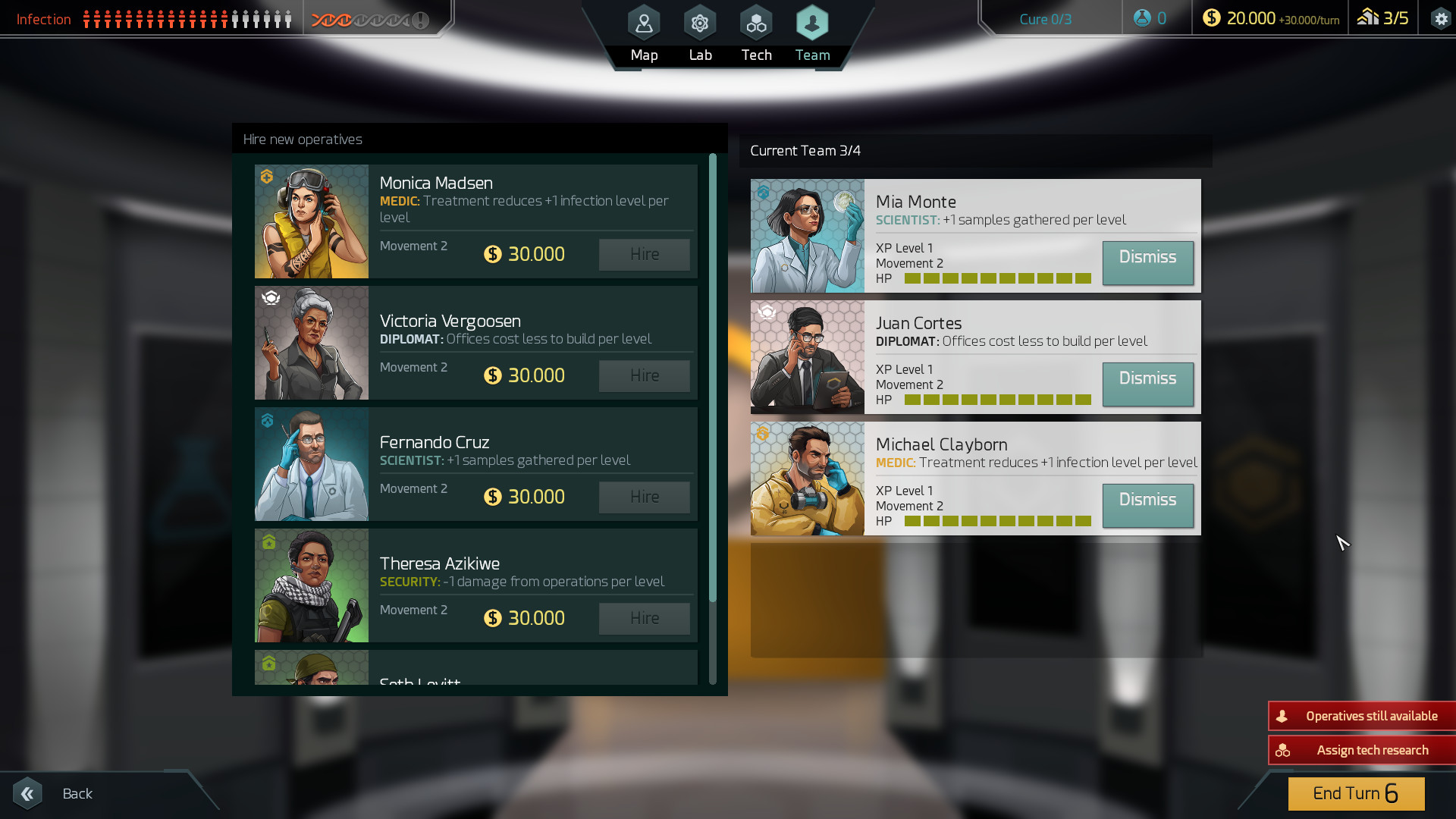