An archeologist exploring deadly temples. I have already seen that somewhere…

I recently played Alwa’s Awakening and was amazed at the level design. The developers took great care to teach everything to the player, leave hints, and even little ways to warn of traps and detect them. Inspired by Rick Dangerous, Baezult 2 does the exact opposite. The traps are carefully positioned right where the player will land in order to surprise with a swift death. There are little to no hints to locate the hidden passages, the player has to randomly dynamite the walls to find the right one that will crack. Is that bad game design? We will come back to this question. 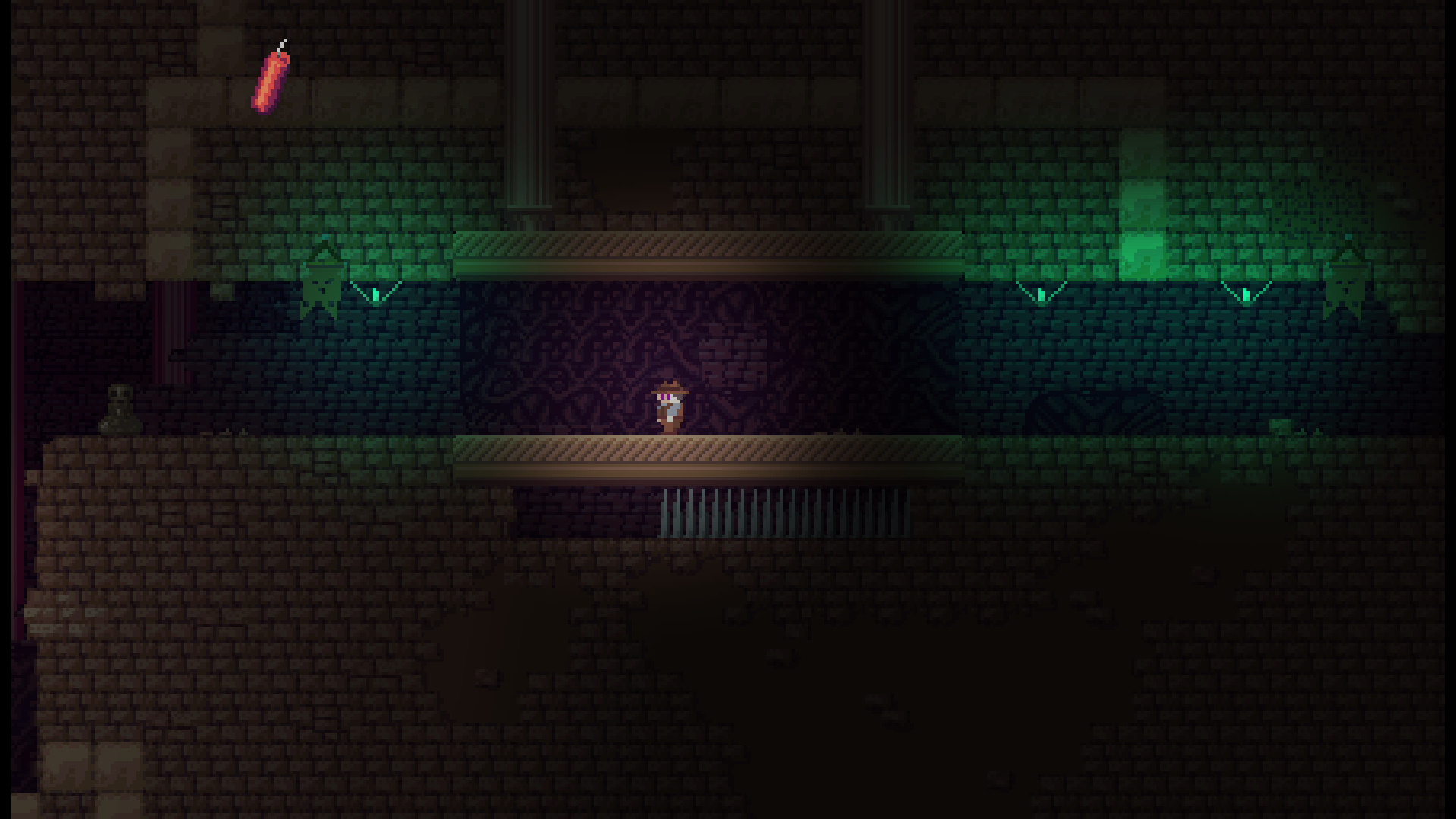 First, the graphics. While this is a step up in comparison to the 8-bit style of the first Baezult, I can’t say that Baezult 2 is very pleasing to the eye. However, it still manages to set the specific atmosphere of dangerous archeological expeditions that I particularly enjoy in this sort of games. For instance, I am very fond of Platformance – Temple Death (I wish this was on Steam). Temples full of dangers such as spikes, boulders and lava are well represented here, feeding into the Indiana Jones niche of the platformers genre. Said in a less fluffy way, temples for masochists. 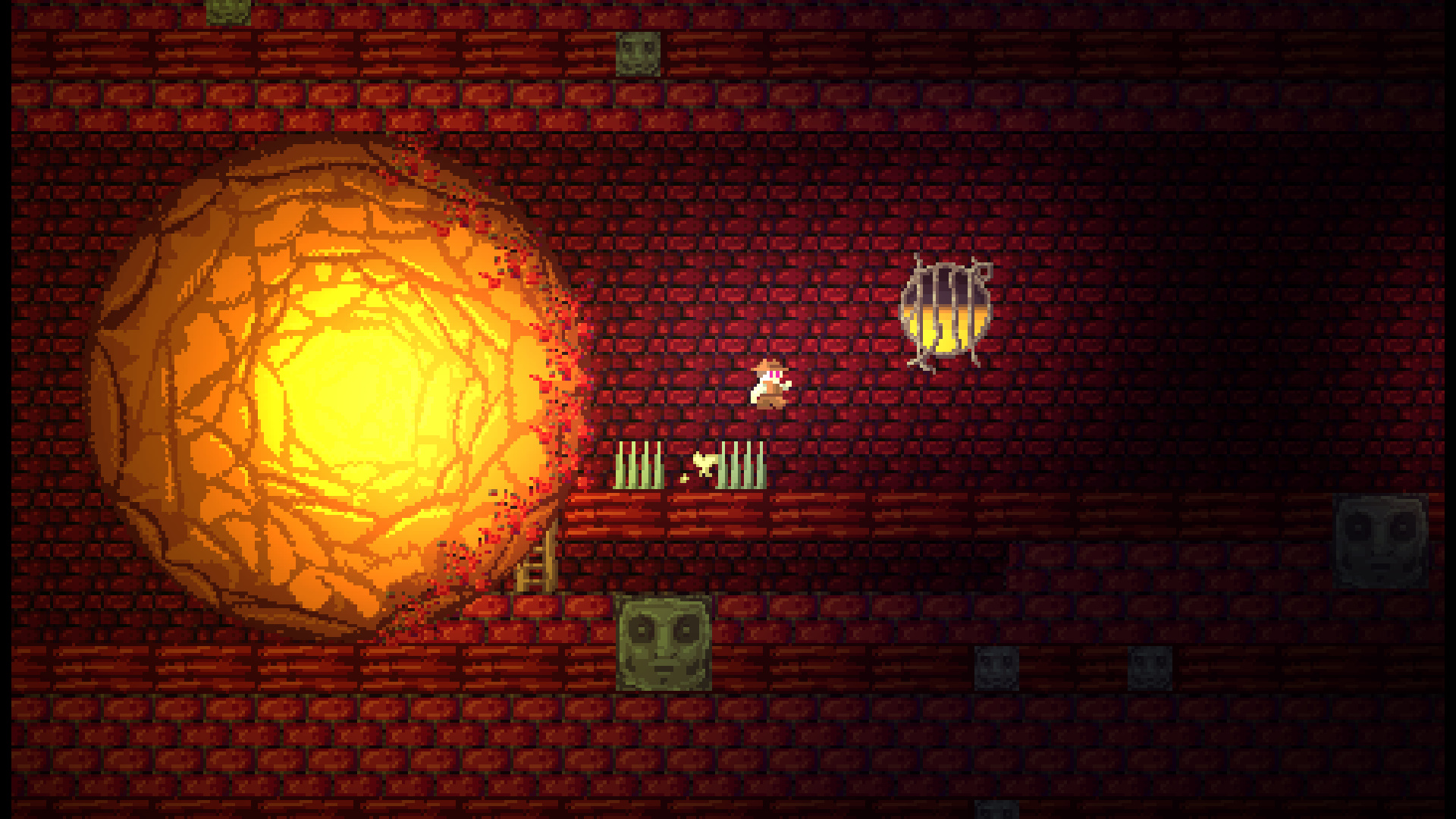 The controls are my main gripe with the game. The only keyboard keys available are the arrow keys, and not WASD as should also be expected. Even better would be the ability to rebind keys, I don’t know how many times I have complained about this for indie games but it always baffles my mind that rebinding keys is not consistently there. So I plugged in a controller, and it worked perfectly. Rebinding the buttons is not possible either, but the base layout works. Now onto the playability itself, I did not particularly enjoy it. While the character reacts quickly and has no latency or gliding that I sometimes see, he still feels a bit floaty, not very precise. It takes some getting used to and is not too detrimental, except for one very annoying problem: it is not possible to jump right after leaving a ladder. It always looks like the character is still in climbing position for one tile before being allowed to jump again. This seems to be a trade-off for the fact that our little explorer grabs ladders very easily, and I really enjoyed that. Very often, these sort of games have issues when the player tries to grab a ladder in mid-flight and Baezult succeeds at this admirably. So to sum up the controls part, clearly some more work would be needed there, however after a short time of adaptation it still works well enough so that I would not need to hate the game for it (which happened to me with La-Mulana). 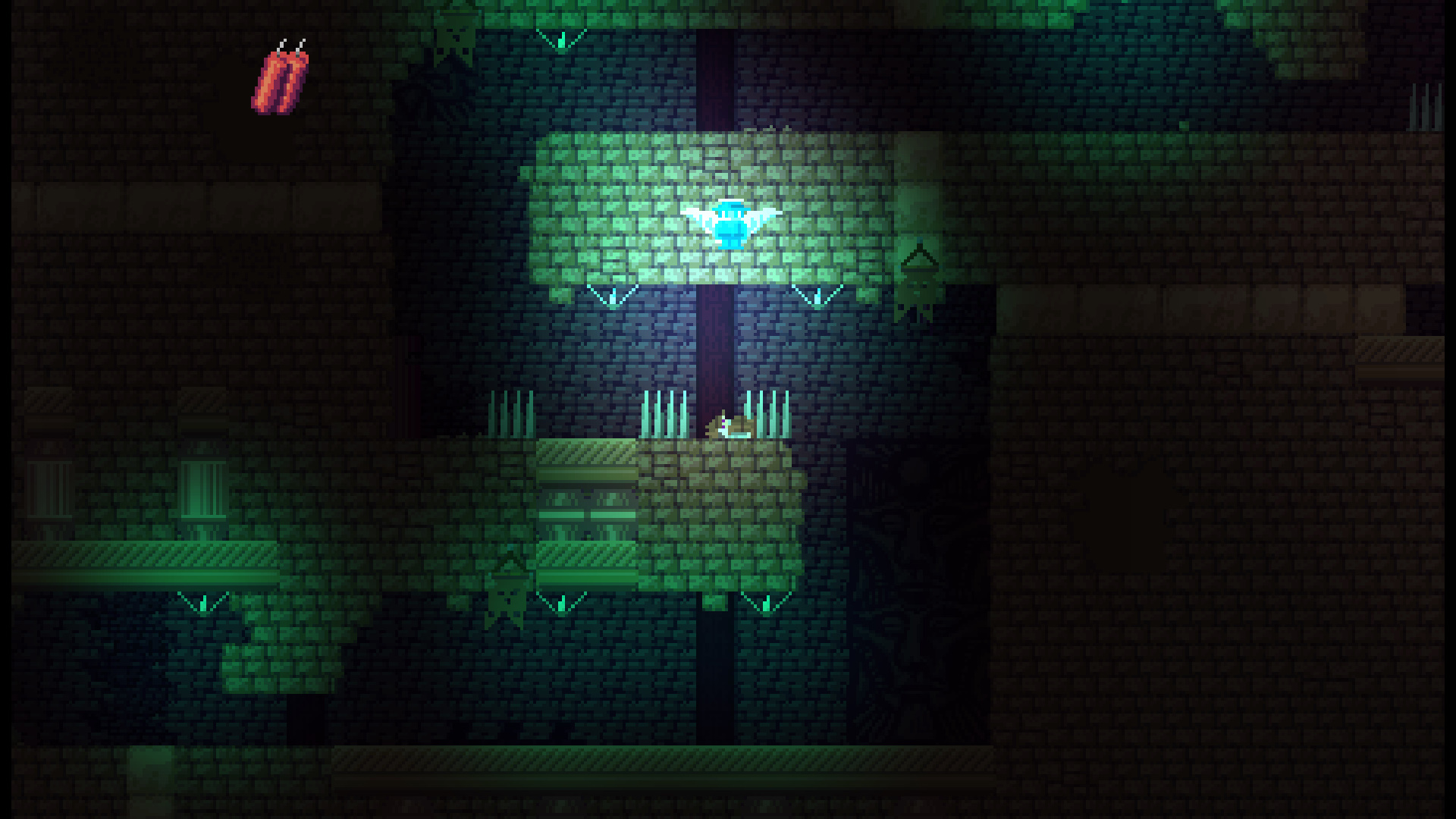 Finally, let’s talk about the main meat of the game. Unlike Super Meat Boy, most spikes on the floor are not visible. They only trigger when you get close, sometimes as close as directly landing on their tile. And then you instantly die. This might sound very rage-inducing, especially if you think about I Wanna Be The Guy, the spearhead of that genre of masochistic platformers that you play to experience the pain of dying repeatedly to random dangers. I must admit that I tend to enjoy those to some degree, and in between two daily doses of self-flagellation with a whip I like the feeling of overcoming crazy challenges that are not meant for humans to survive. And this is where it becomes tricky, not in terms of surmounting the odds but in terms of enjoying the suffering. A bit too difficult, a checkpoint a bit too far, and the player starts to get stuck. Being stuck is not fun. Being perforated by a sudden spike surging from the landing point? This is fun the first time, less fun when it happens repeatedly. Each death is supposed to inform you of the next threat, unlike Alwa’s Awakening those games are “die & retry” in its purest form. However, if you know the threat and there are still too many things to achieve perfectly right over a long period of time, then the suffering can turn to boredom.

The point where I am getting at is that those hardcore platformers are not just about punishing the player, they are about doing so in an entertaining and engaging way without being so difficult that they are not fun anymore. What’s fun is dying to a new trap, not dying on the same spot over and over. At the start, I praised Alwa while saying that Baezult 2 might very well be the opposite. And while both games have different approaches, it turns out that Baezult 2 is also very well designed in the pacing of its traps. Sure, you might die a lot, but the checkpoints are plenty and respawns are immediate. The checkpoints are located right before a challenge, just like in VVVVV and You Have To Win The Game. Which means that you don’t have to wait or walk far to try again. You might also start to notice that some tunnels get you close enough to the spikes of your next destination so that you might trigger them and see them before you go there. You have to learn sequences (push a box here, destroy this, hide here, jump here, dodge this, reach the checkpoint) but they are short enough and not too difficult to succeed at. Baezult 2 manages to be one of these masochistic platformers that provide the fun without being unfair or infuriating. I finished the (too short) adventure in less than two hours without being mad at the game! That was a really good prowess to achieve.

I talked about the spikes, let’s now talk about the projectiles. There are some darts the player can equip to kill some (immobile) enemies on the way, but the trickiest part of the game are the dynamites. In short supply for each challenge, they allow removing some precise destroyable blocks. Those blocks do not give any hint about their existence, so it is sometimes a bit of trial and error before finding them. Usually, they are placed in a way so that the destroyed wall will hurl at you at high speed. Maybe there was another block to destroy first, to be used as a hiding place. As an aside, I must note that these square projectiles are very ugly. Something that would truly look like debris would serve the same function and look a little bit better. There are some boxes to push, I tend to dislike this game mechanism in platformers that rely too much on them and slow the pace down, but here it was used sparsely and not obnoxious. 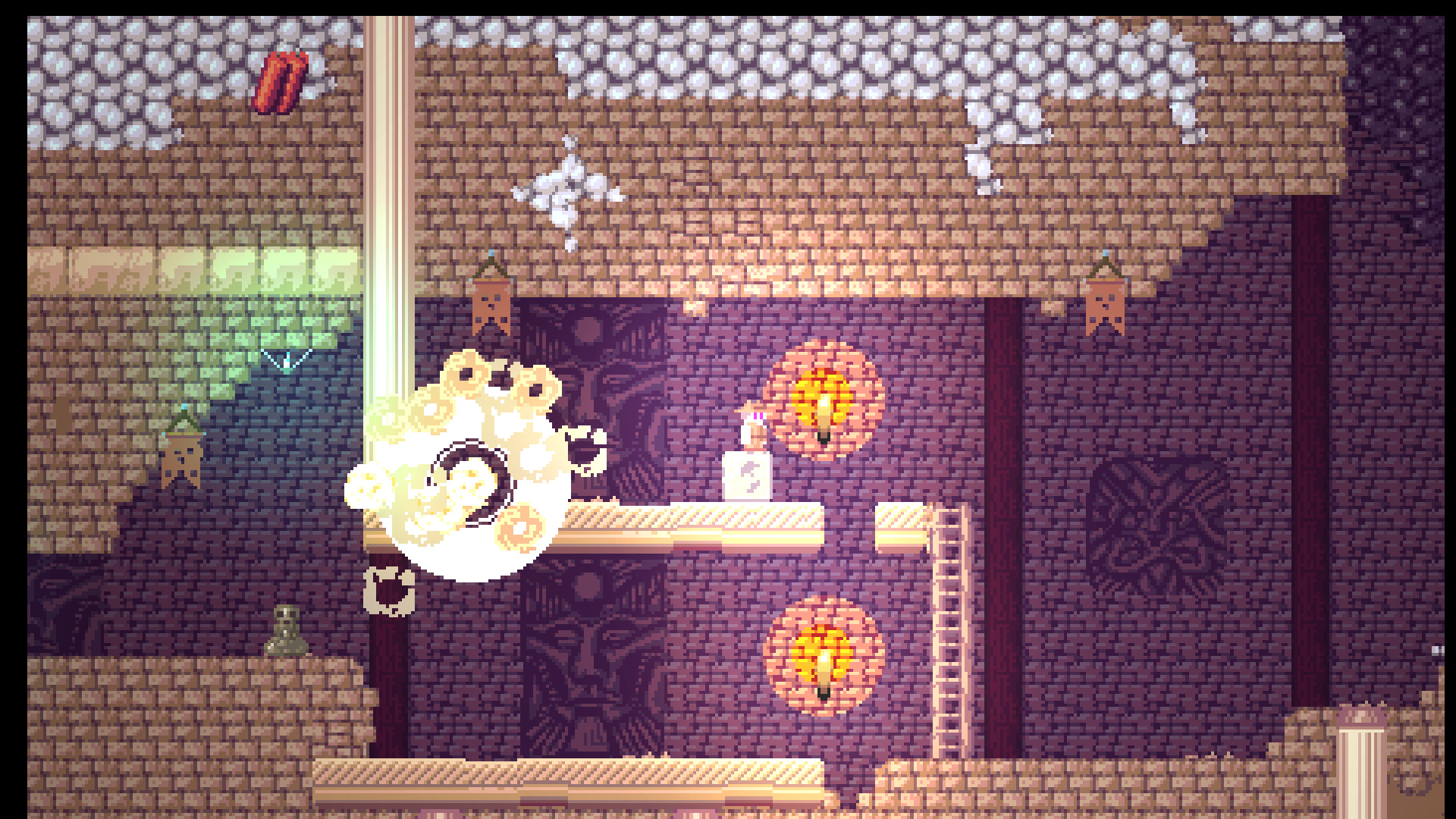 The problem is, despite the level design being very solid, is that there is nothing very surprising or very exciting, and the game is too short. While I am happy that quality wins over quantity, I would have liked to see many new traps or crazy situations. Baezult 2 is clearly far from being a bad game, but it lacks a little spark to make a name of its own in such a saturated market.

As a conclusion, Baezult 2 is a masochistic platformer done well. While the game is designed to punish you for any wrong move, it is designed well enough to let you learn from mistakes and manage to go farther on the next try. The checkpoints are just right so that you can reliably make progress without having to repeat sections too much. However, the game is too short and lacks memorable features, visuals, mechanics, enemies or traps to distinguish it from the rest in a market saturated with platformers. Too barebones, even if the game does well what it does despite a small lack of polish on the controls.