An unapologetic 3D Sandbox “racer” which endears itself to players through its unconventional approach and content creation potential.

Guts and Glory! Now that’s a title that does justice to the game it labels. If Goat Simulator was gaming’s equivalent of an acid trip, well G&G must be compared to wiping VX on your face. Feel free to google that as I have more important things to do now. Such as describing the hilarious chaos that Guts and Glory actually is. I never had so much fun with an Early Access title on Steam before. I’m sure you noticed the weird genre label I gave it. What’s the deal with that? Well just as the trusty ol’ Goat, I Am Bread, Garry’s Mod, Guts and Glory can be fitted into a genre of its own. Yet all that gore and black humor moments have to be taken into account too. Thus the “Chaotic Sandbox” term was coined by yours truly. 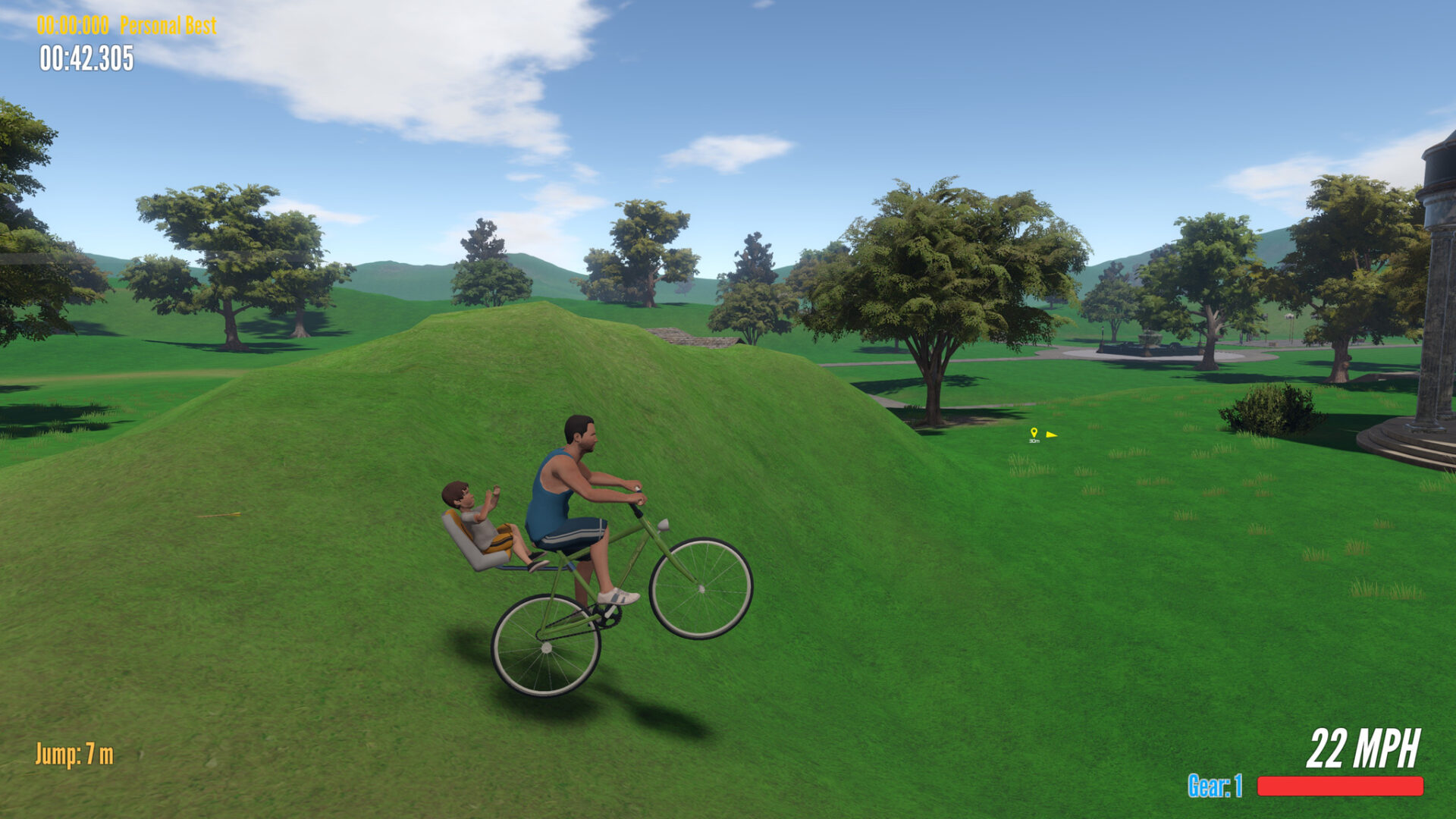 The dev team never released another project prior to G&G and as you can imagine, I’m quite impressed by their Steam debut. Early Access stage or not, you have enough content already in place to justify its price tag for example. How could I not appreciate that, considering that nearly half of the Early Access games I played so far on Steam felt more than just a little overpriced and some were abandoned by their developers eventually? I got a feelin’ Guts and Glory shall teach its label counterparts a lesson or two in those regards. Now let’s discuss the gameplay, shall we? For the life of me, I wish I had the design talent/patience to create digital art or draw something cool. Because you will be making the equivalent of art, in its raw form, should you hit that “Create” button from the game’s Main Menu. Yes, you can create your own levels filled with as many obstacles/traps as you like and then share them with the rest of the Steam community via Workshop. Nifty option, but not for an antitalent. So I’ll just stick to the “Play” button and enjoy the official tracks along with whatever eclectic craziness other folks concocted. 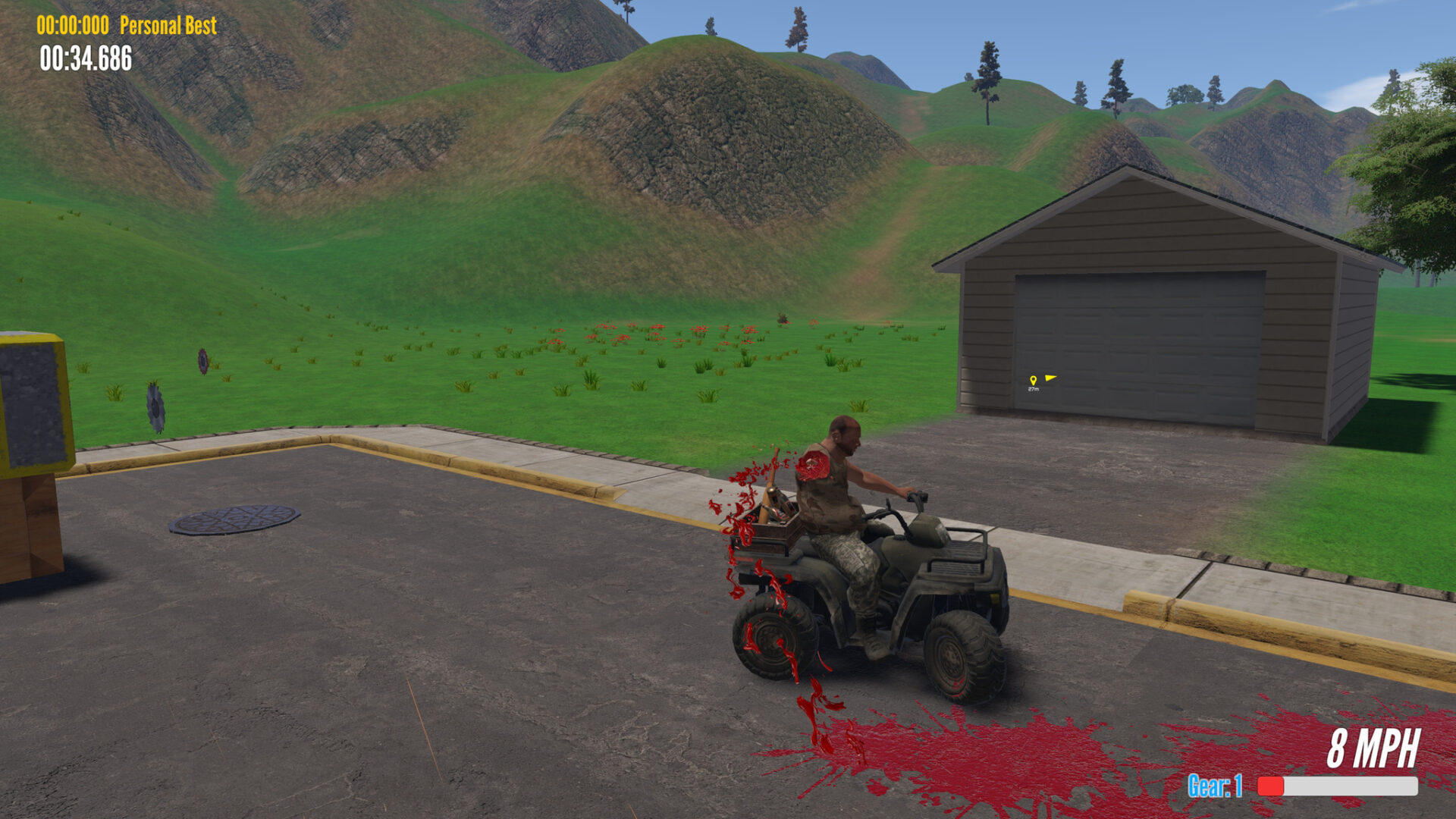 With no storyline per se and three distinct heroes to choose from, you do need some explanation. From what I could pick up so far, Guts and Glory seems to share that name with the kind of activity that puts Japanese game shows on shameful display. Lame pun, right? Well G&G is filled to the brim with humorous situations which quickly turn lethal, in a not so Happy Tree Friends style, for our hapless protagonists. Let’s see who they are. Not-so model father John and his youngster, Jimmy. They ride a bicycle which I’m sure Jimmy would have preferred to be a mountain bike, fitted with the proper suspension for the places his deranged father shall drag him or more likely, lose him along the way, since that child safety seat seemed very flimsy. Now you’re starting to understand why kids aren’t usually portrayed in certain video games. Next on the list is everyone’s favorite redneck stereotype: quad bike riding, shotgun-toting, Earl! Sadly he doesn’t have a matching personality or at least a few lines of dialogue/monologue and Billy Bob was probably busy. His quad is an obvious improvement over John’s bike, so if speed is crucial for the stunts, Earl is your man. Just don’t lose the beers he’s carrying or he’ll surely introduce you to his baseball bat. 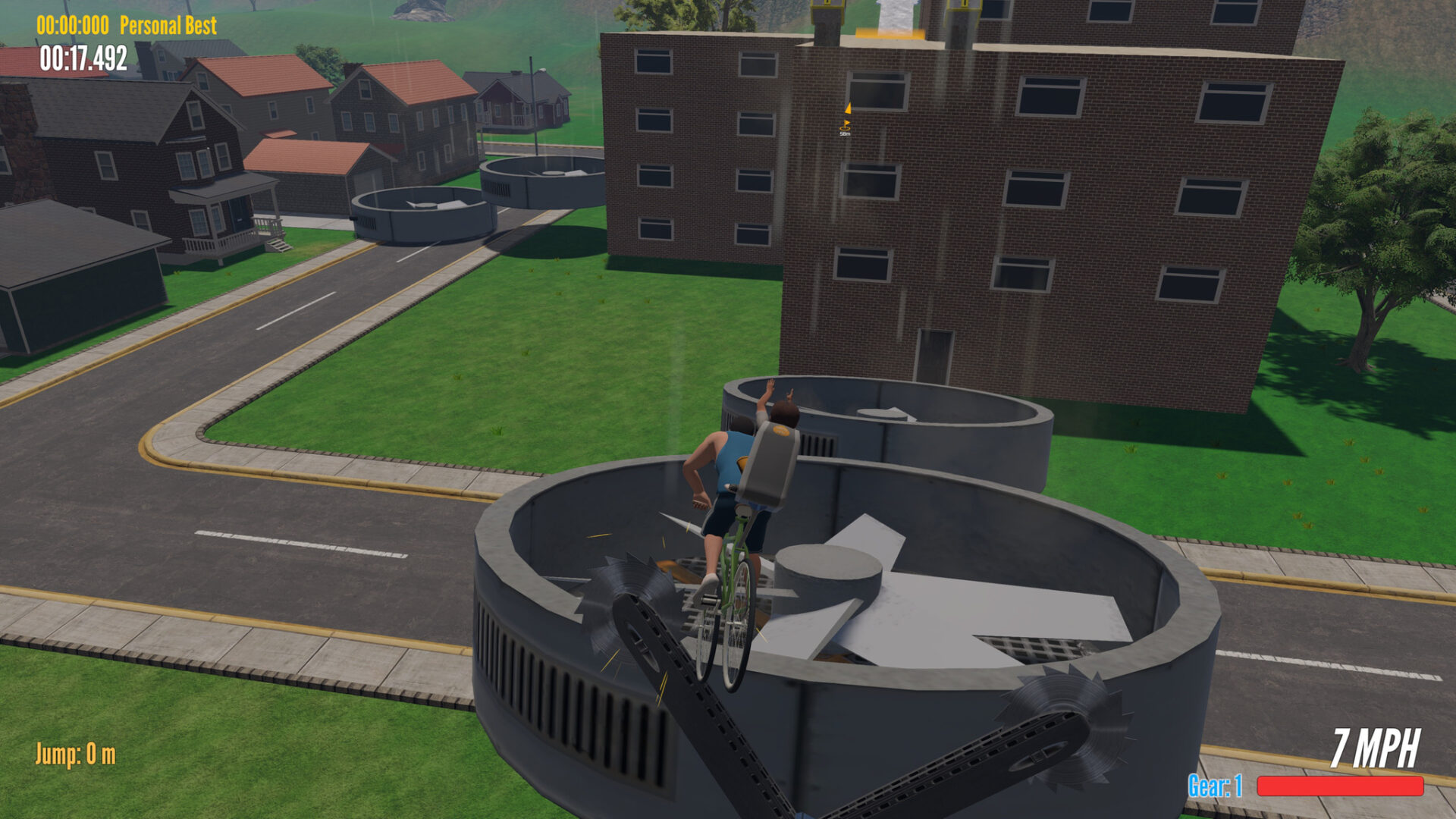 And last but not least, it had to be another stereotype, right? For real, I’m not making this up. The Yang family. As if there weren’t enough films featuring the “Asians can’t drive” trope. Well, you shall control Mr. Yang taking his wife and daughter on a road trip to a theme park. They drive a nice convertible which ironically, despite being the heaviest vehicle in the game, features the funniest (or grizzliest) stunts. The car seems to have been sabotaged or something and you can fill in the rest and the exact outcome of attempting to drift at every turn with next to no brakes. 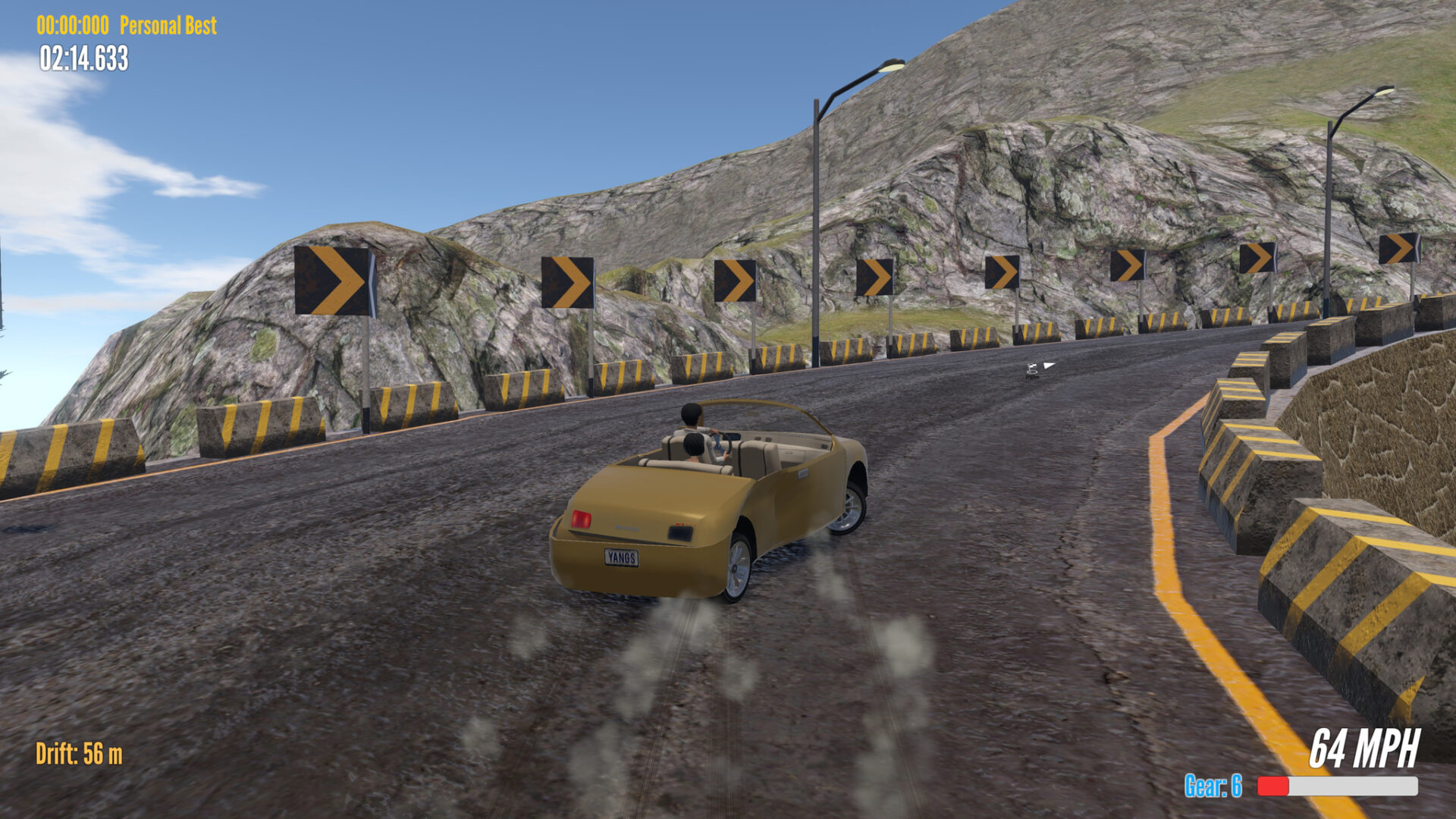 With such an (un)likable cast of characters, what could go wrong? Well a lot, apparently. Traps which range from silly to serious and most of them deadly upon impact. Spinning circular blades, arrows, land mines, cannon balls and even good ol’ gravity at times. Nothing spells “family trip fun” more than driving full speed off a cliff and straight into the woods at night. We’re lucky Guts and Glory thought of everything. I won’t spoil more, you’ll get the hang of this game in no time. What was basically a boring checkpoint and stunt game on paper is in fact a prime example of dark humor when rendered in motion. I already tackled the pricing concerns, along with the content present so far as opposed to the insanely promising stuff the dev team wishes to implement in future updates. Purchase it now and you won’t regret it, if it’s 3D chaos you’re after. I do hope that with subsequent updates, both Achievements and Cards will be included in this already tempting package. Just don’t forget to leave the trap-filled stunts for video game characters and drive responsibly in real life. Also avoid land mines. Those encounters never end well. 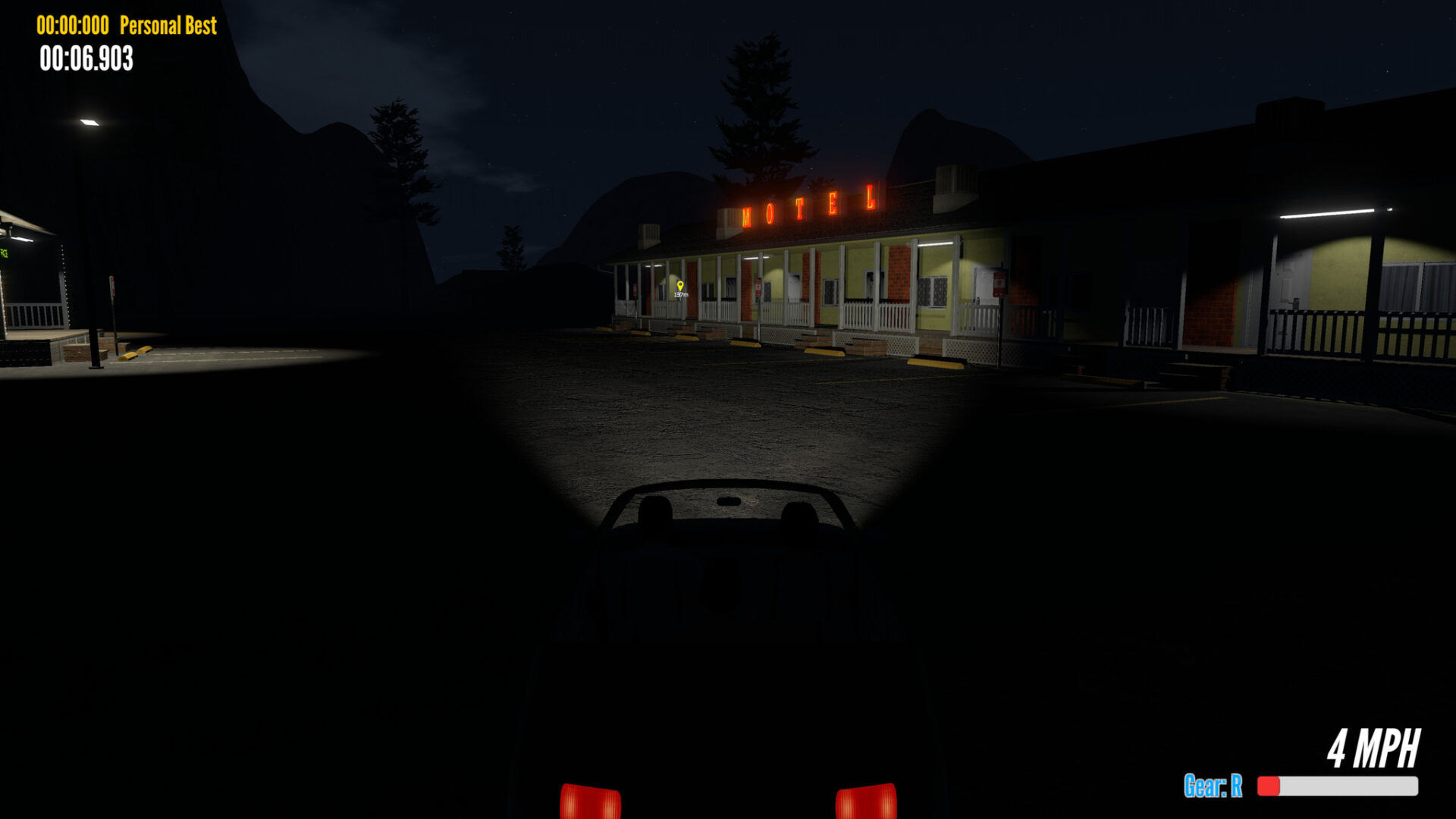 Weak Points
– Lots of content is still work-in-progress.
– Still a few bugs and unintended glitches here and there.
– No Steam Trading Cards nor Achievements.