Loot Rascals is a turn-based combat game where you have to explore a hex map, battle aliens and reach the exit. 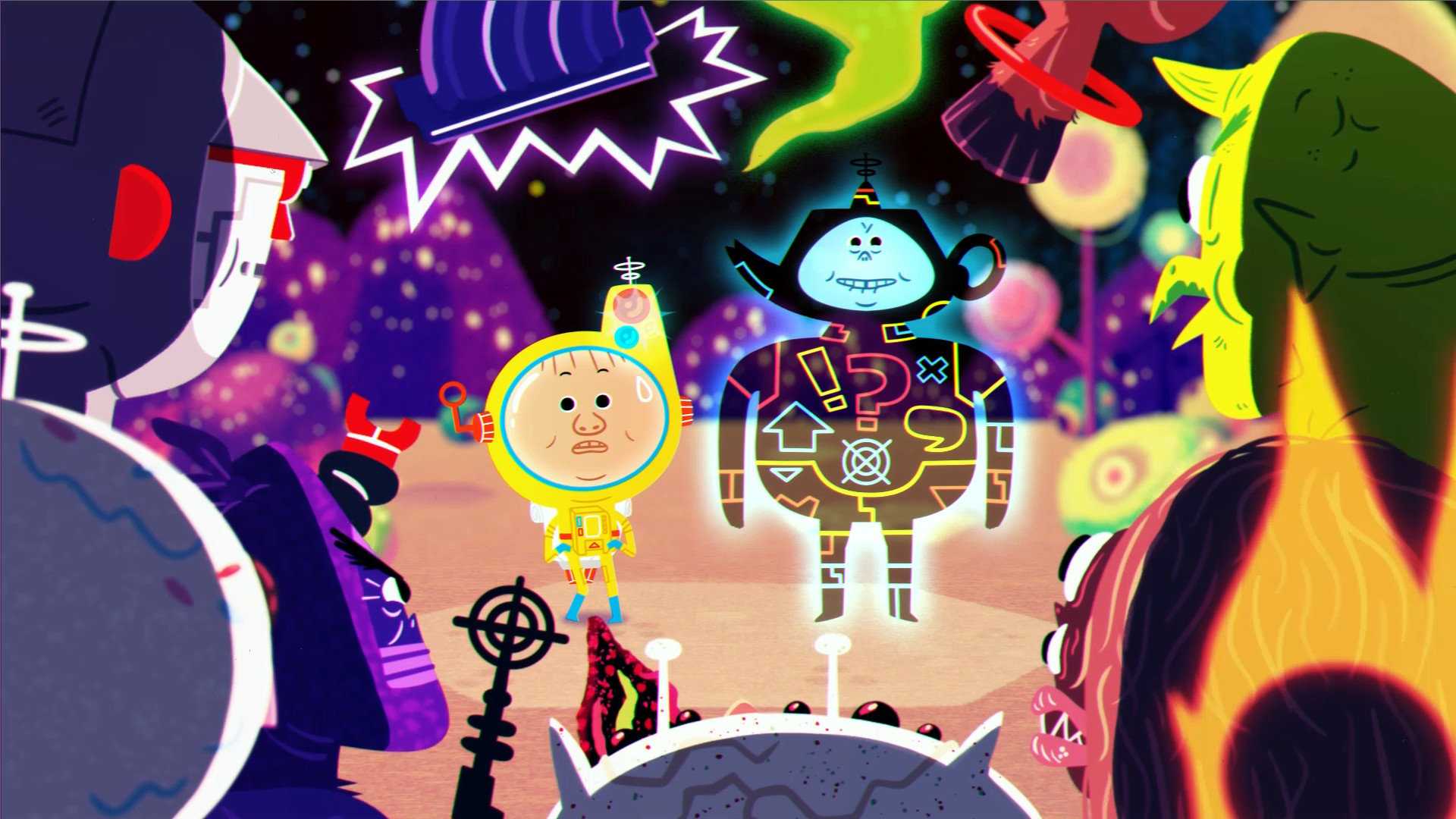 The storyline starts off with a cutscene. You’re flying through space being briefed by a teapot-head character with a very thick Scottish accent. You’re on your way to an outer space holiday camp on a mission to make repairs. However, on arrival you’re confronted by a crowd of angry looking aliens, AKA Rascals, the leader of which is a lady alien with a vagina for a face. Your narrator then falteringly declares a new mission: escape.

You start off in the ‘dome’, your safe area on a yet-unexplored hex map. You venture out, battling baddies along the way, with the map being revealed as you explore. The ultimate goal is to find the exit node to the next area. There are a total of 5 areas with a final battle at the end.

It’s a turn-based game but there’s no careful planning phase before every turn, it’s just that you use a turn when you move to the next hex or activate a new card. The game moves along at a brisk pace. You start off with a set number of turns, and if you run out the map is immediately infested with high-level baddies and you’re more or less toast at that point.

As you slay baddies, they often drop cards which you can pick up and equip to your 10-slot inventory to increase your attack/defence levels. This is the main focus of the game. There’s a huge variety of cards, the most basic ones give one att/def point, others have bonuses depending on where they’re placed on your grid, for example +2 on an odd-numbered slot, or +1 to cards either side, and so on. The arrangement of cards is all-important. Special cards can be placed without taking up a slot, giving special powers such as ranged attack, healing, teleport etc. Sometimes you get a card that belongs to someone, and if you send it back they sometimes come to help you battle the baddies later on, which is very useful for as long as it lasts before they die. 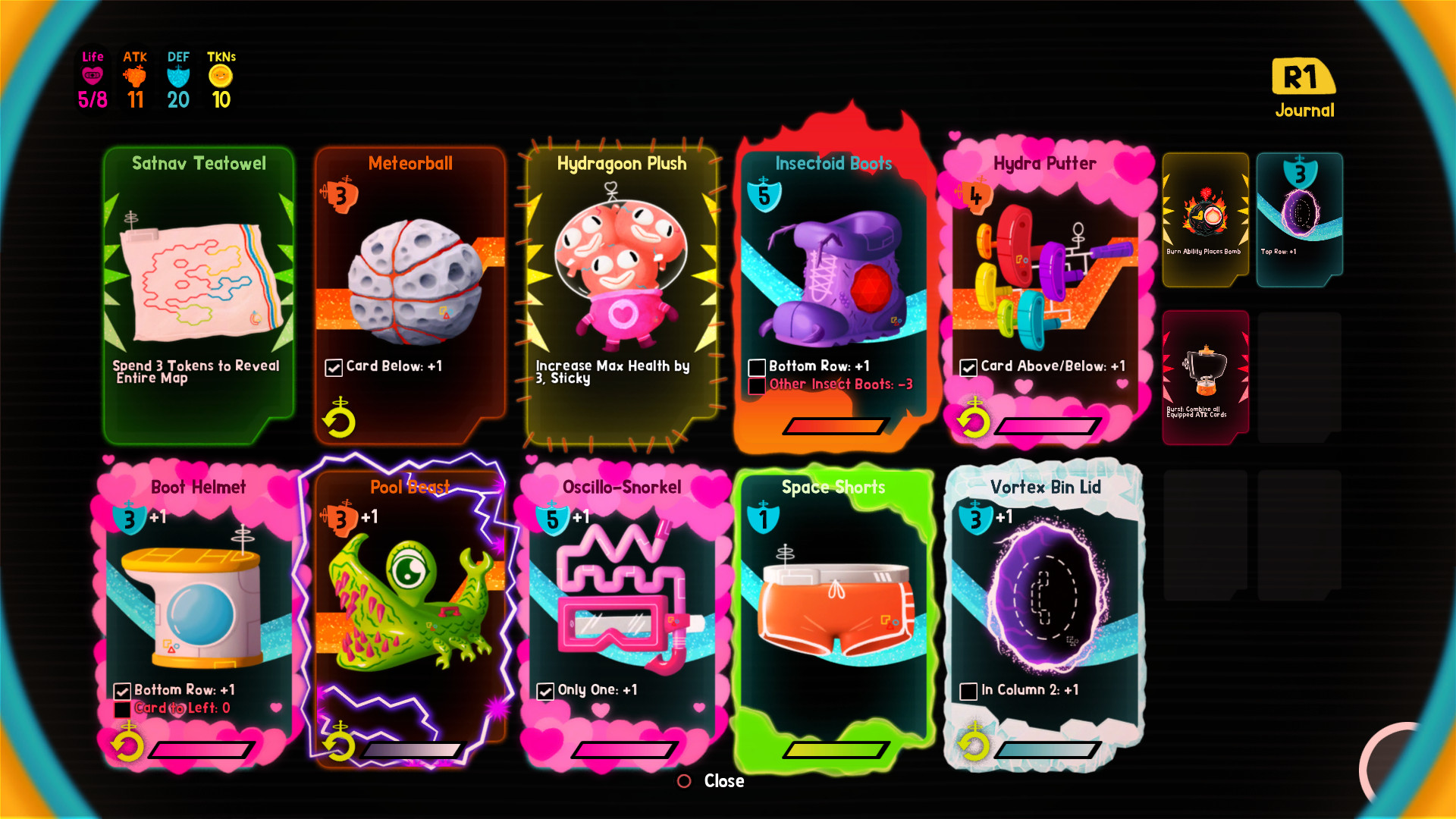 Combat system is very clever. There’s a day/night cycle, 5 turns for each, and this dictates who makes the first hit. Each type of baddie is either diurnal or nocturnal and has a strength value above their head. If it’s blue it means you’ll get the first hit, so you chase after them. If it’s red they’ll get the first hit so you run away. You can also judge the likelihood of a victory based on their strength level and your own att/def levels. There is a small amount of RNG I think, but in general you can calculate your odds. For example, if the baddie is level 10 and you have level 15 attack and also the first hit, you’ll kill him with one hit without taking a hit yourself. You have a limited number of health points and when you reach zero you die and wake up back in the dome with most of your accumulated cards gone and have to start again.

There’s the main game and also a daily challenge – I think you only get one attempt at this, and obviously I don’t know what happens if you win because I never have. There are online leaderboards, one for overall success based on areas reached – those who have escaped are then ranked on the number of turns taken (it’s good to see that it is indeed theoretically possible to escape) – and another for daily rankings. There’s also a ‘game seed’ mode that allows you to repeat previous games you’ve lost (due to the fact that new maps are procedurally generated). You have to note down on a piece of paper the long number associated with your playthrough and then type it in to reactivate it. This seems unnecessarily complicated. Why there can’t be a list of a few previous playthroughs and/or save slots is beyond me. Previous cutscenes are conveniently saved for future perusal, so why not playthroughs?

I played with a controller but mouse/keyboard would be fine as there is no time restriction, you can play at your own pace. 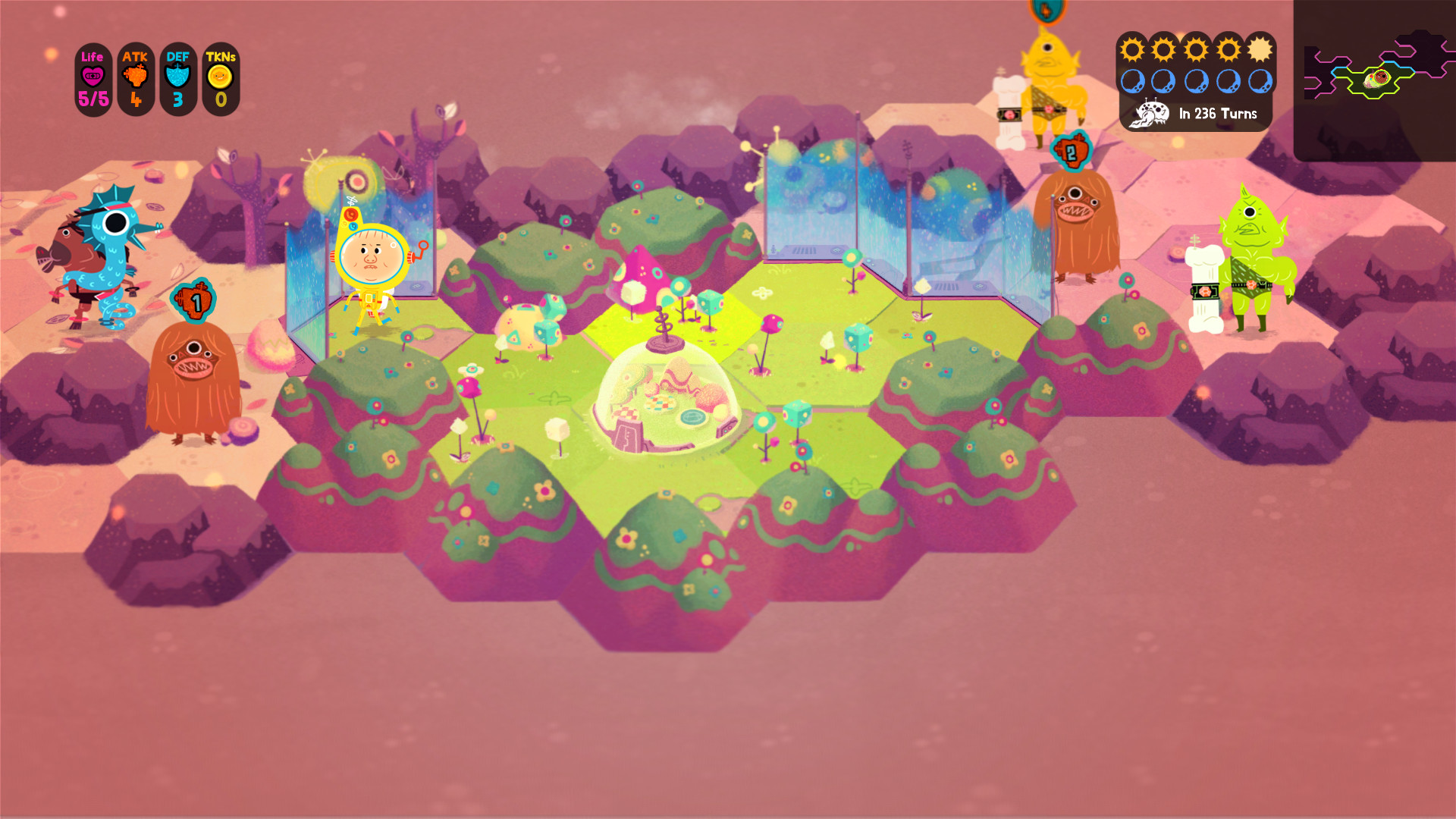 It’s a cheery, brightly-colourful cartoon environment with lots of different baddies. The background tune is a light, innocent melody and the general atmosphere would not be out of place in a children’s TV show. I enjoyed the music for a while but then it got repetitive because a) I’m stuck in Area 1 most of the time, so if there are different tunes in other Areas I’m not aware of them, and b) there is no audio setting! You can’t even turn it off, let alone change the volume. Bizarre. Likewise, you can have fullscreen or windowed but there are no resolution options. The window size is one you can live with, but with the amount of effort that has been put into the game, the lack of any video/audio settings is puzzling to say the least.

It feels easy as I’m playing it, it really does. I’m kicking butt and taking names and then all of a sudden the game says “NOPE!” and attacks me with an overpowered baddie who slaps me to death, leaving me sitting in my chair with a dazed expression, wondering what just happened. I feel like I’ve mastered it but I’ve been playing for hours and only managed to reach Area 2 once, and even then it was more luck than skill as I happened to move in the right direction to find the exit. When I did finally make it to Area 2 there was a big scary level 44 baddie right outside the dome and that was the end of that. The map is different each time you restart so you can’t build up knowledge and work out which direction the exit might be either. It’s not frustrating because you do get to play the game, it’s just difficult to progress past Area 1. I guess it just takes time to ‘git gud’ as they say. 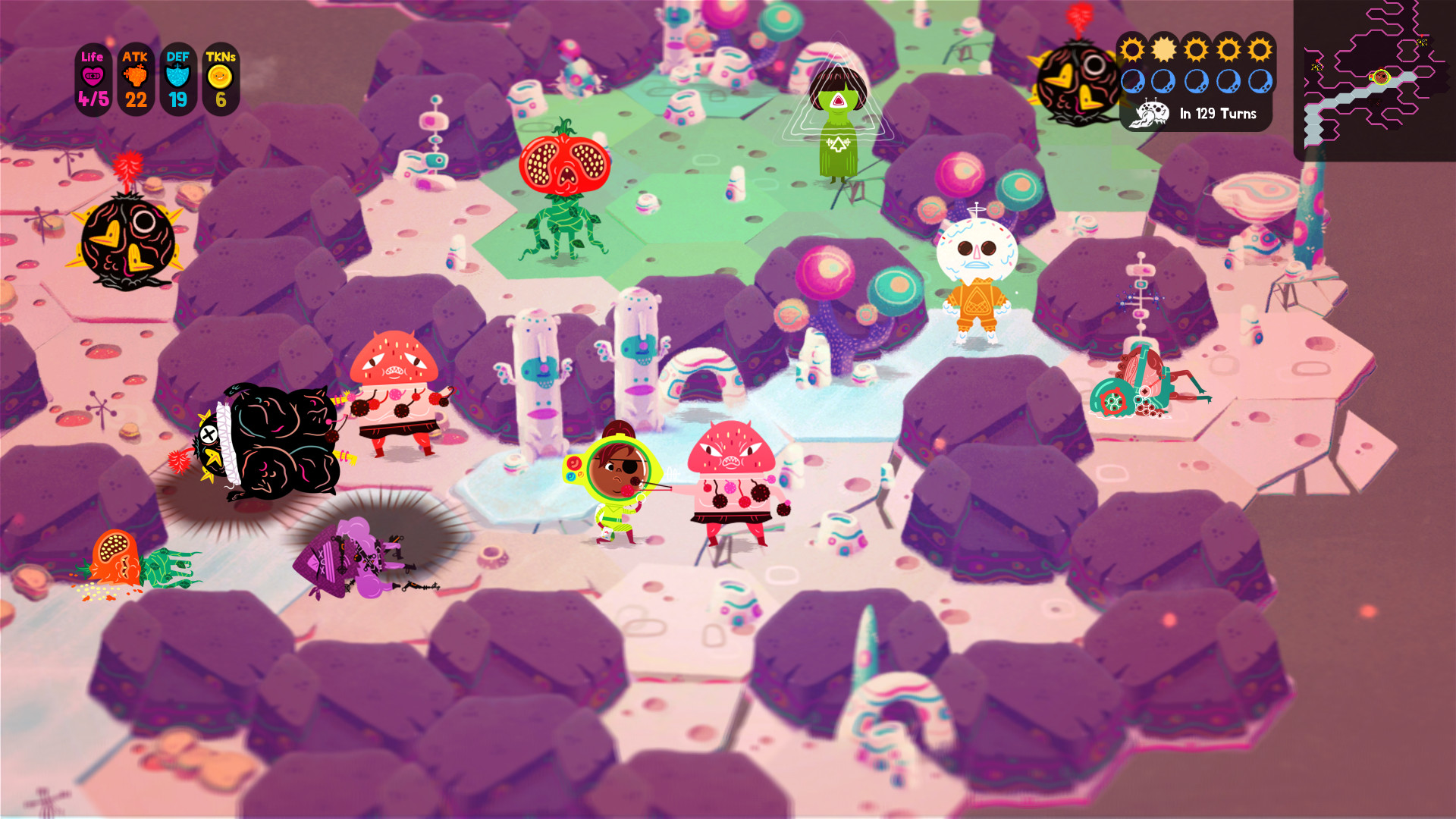 I’m writing this before release so I don’t know the price. I call $10, let’s see if I’m right. It’s an entertaining game with endless replay value albeit with a steep learning curve.

It’s a charming game with an interesting and intuitive combat system. There are a few basic game features inexplicably missing, but nothing that affects the gameplay. I’m enjoying the gameplay, art, cutscenes and everything, but I fear I’m destined to be forever a noob, languishing in Area 1.