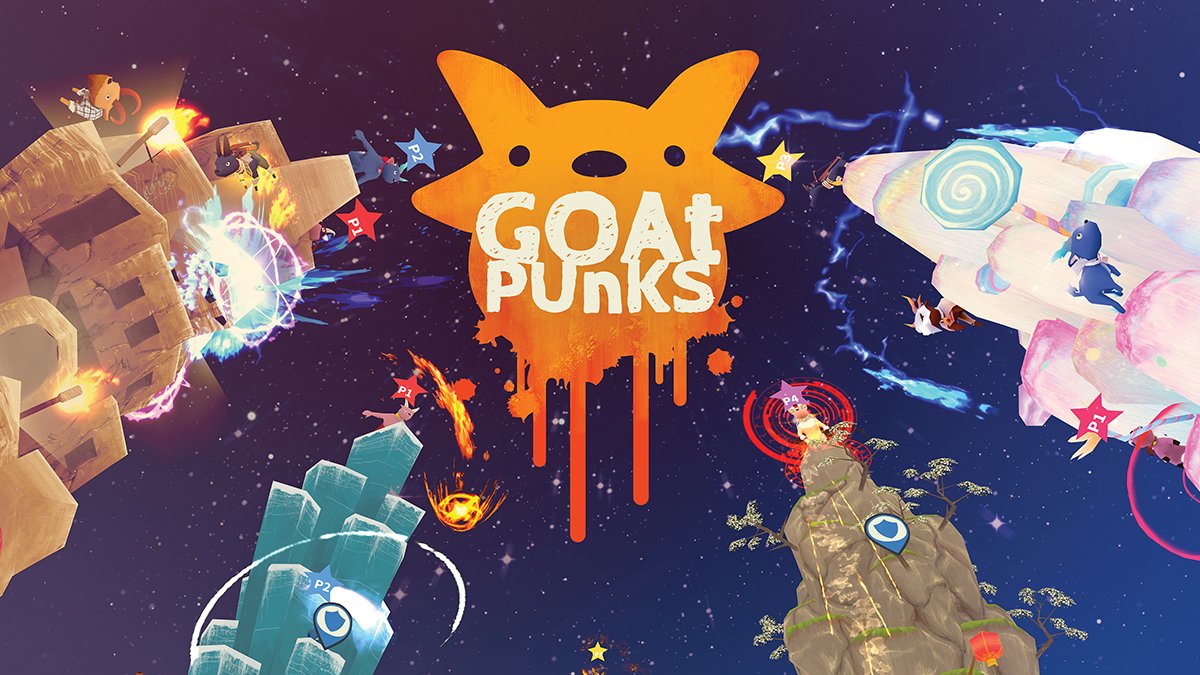 There are a few staples of the 4-player versus multi-player that consistently surface when playing with my friends, among them Samurai Gunn and Duck Game. Whether or not they want it, I will make GoatPunks one of the new pillars of our multi-player sessions. 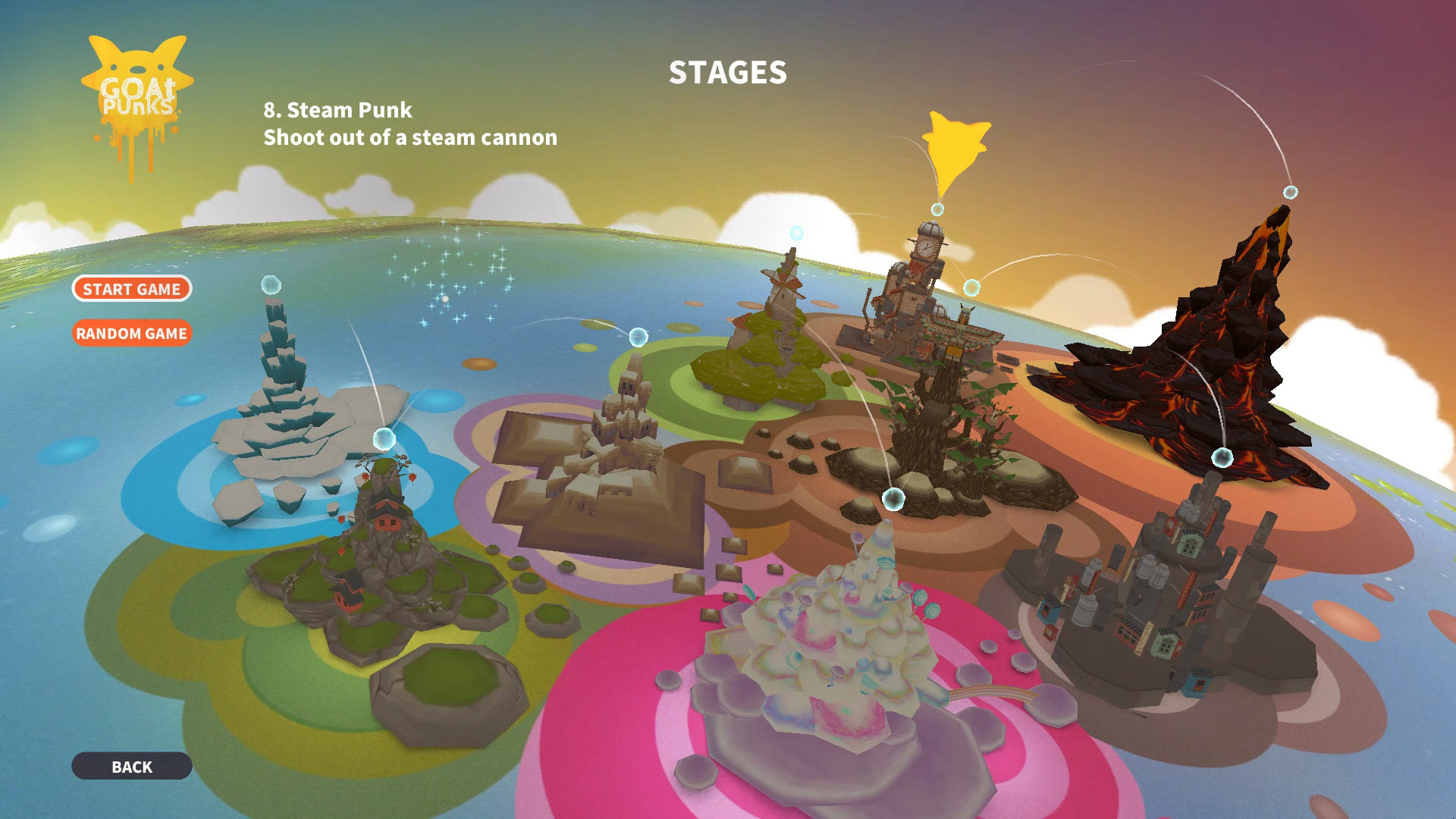 I have always loved the 4-player era that the Nintendo 64 brought. As I mentioned in my review for Astervoid 2000, TowerFall admirably rekindled the genre on PC. Since then there have been many many many (many) 4-player multi-player games, some that are really bad, some that are fun for a moment but then get forgotten, and some that stick. That specific trend has also evolved from local multi-player to online multi-player as well, which is a fantastic thing when you don’t necessarily live close to your friends. And GoatPunks, well… despite just appearing in early access, it already has a functional online multi-player and enough elements to make it climb to the top of my list with the aforementioned games in the introduction. 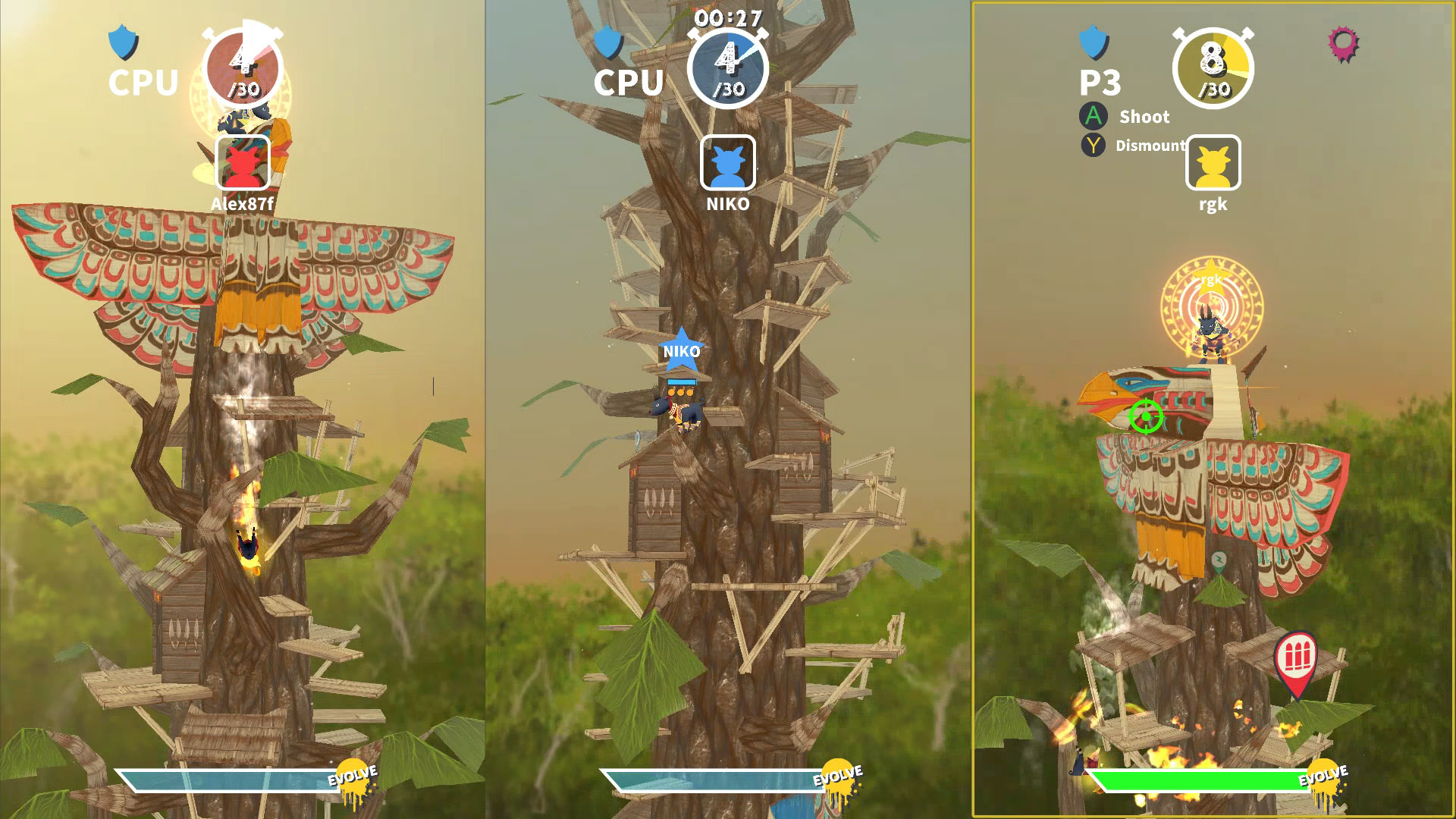 How convenient, climbing to the top is literally the aim of our Goat Punks. Whether they are Hipster Punk, Steam Punk or Candy Punk, they battle across several beautiful and varied vertical levels. Whoever reaches the top of the mountain has to stay there for a specific amount of time (classic King of The Hill game mode, but with an actual hill to climb) while raining down bombs on the Punks below that are not behaving. Puny goats that have been stomped over or exploded will fall down with a cute scream that reminds me of Worms, and while sometimes they are ejected back to the beginning sometimes it is possible to press a button with good timing to grip a platform and go back to the fight. Being ejected back to the beginning several times in a row and scaling the mountain over and over can be frustrating. 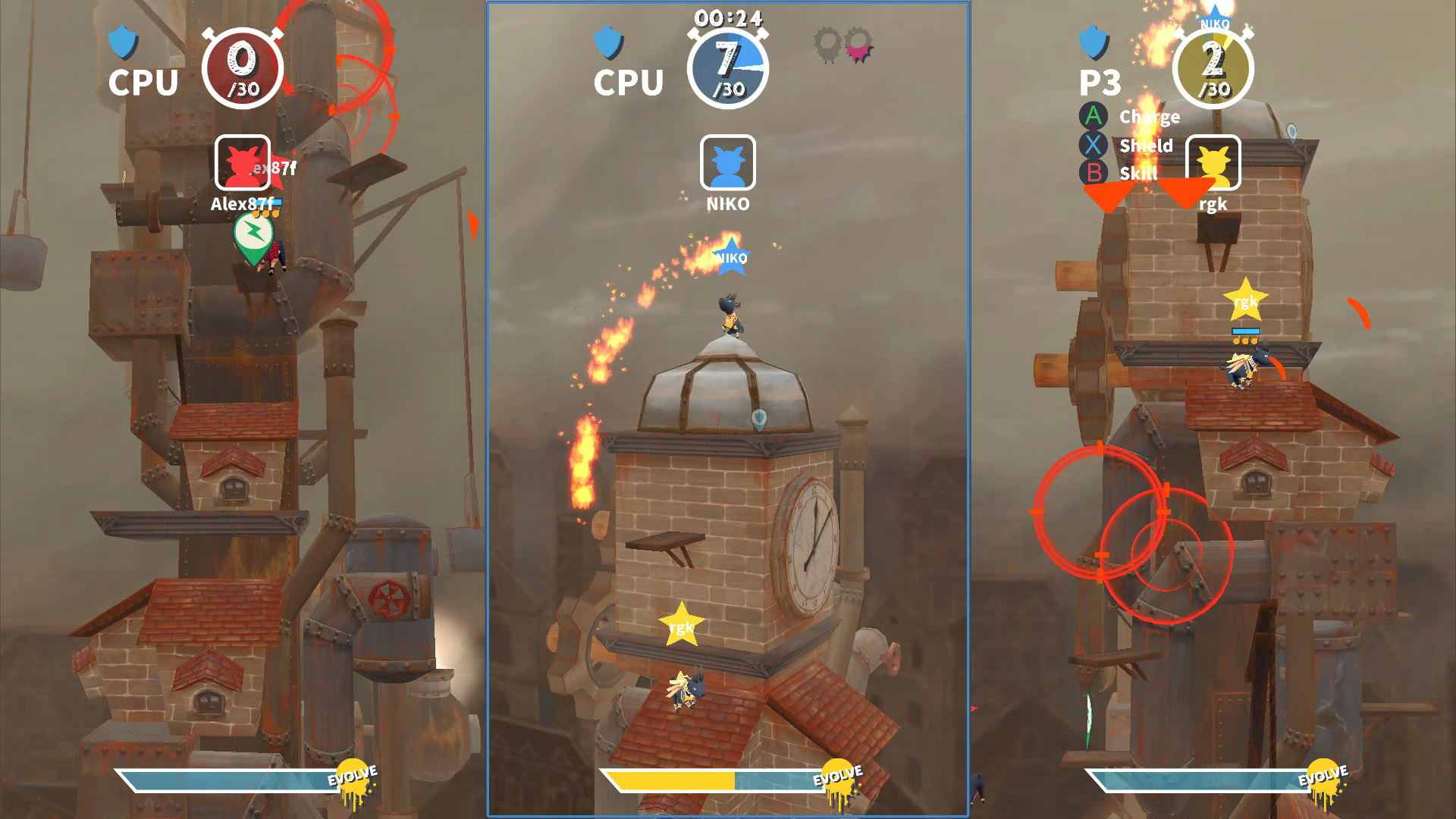 Each level has its own quirks in terms of shortcuts. The mill has birds that you can ride, the factory has steam geysers that can propel you. Some shortcuts require good timing to be used correctly and climb faster. Visually, they are all a treat, very different and yet all cute with a good sense of color. 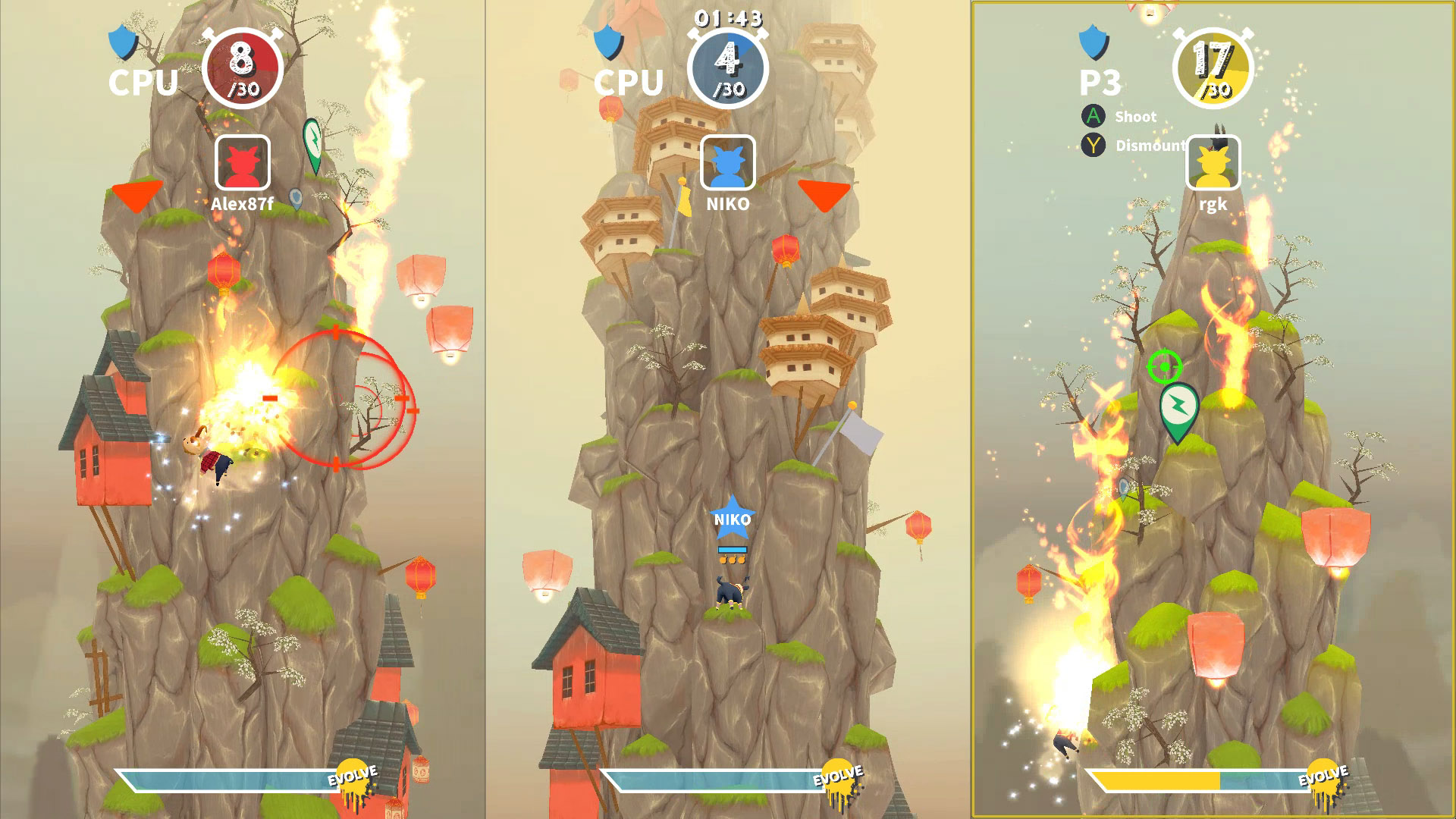 Moving is a bit weird but it works just fine. I will attempt to describe the system… because unlike any other game, you don’t actually move and jump on the touch of your buttons. Here you just point in the general direction in which you want to go, and your tiny goat will automatically move towards there if there is a platform to jump on. While this seems counter-intuitive at first, in practice you don’t think about it. I believe that this is done to make the climb more fun and accessible to anyone rather than centering the game on basic movement skills. Thus, everyone can focus on the real meat of the game. My only gripe with this movement system is that if there are no platforms in the direction you want to move, the cursor switches to red and your goat stops moving. I would have liked to see maybe some basic automatic pathfinding to avoid these moments when your brain just goes “uh?” and you lose a few precious seconds. It’s not always obvious when a platform is too far for your cute goat to reach. 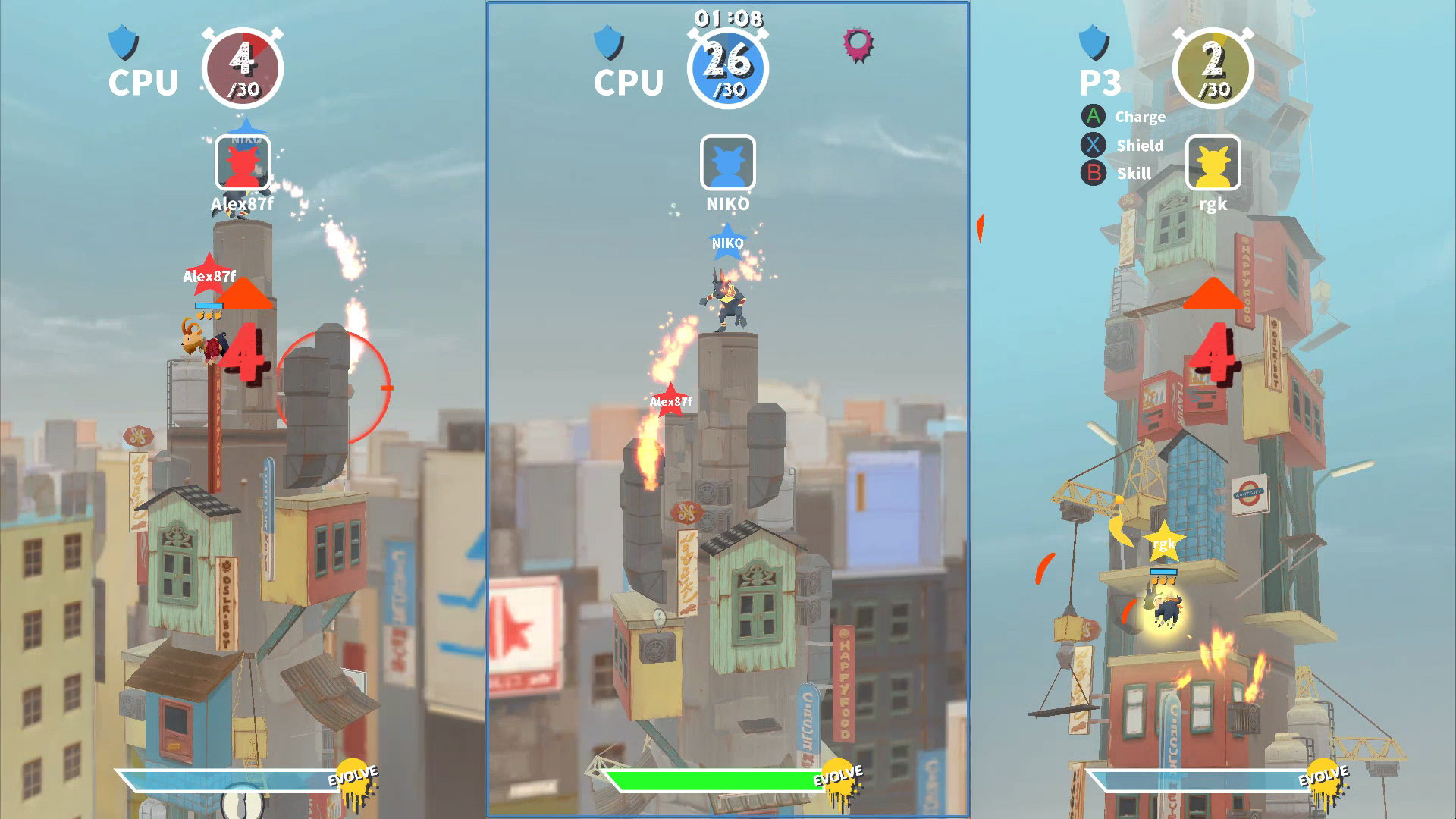 Alright, let’s finally talk about the core game mechanic. Each adorable goat has a few actions at its disposition. There is a charge that takes a little bit of time (without moving) before launching a deadly dash. There is a shield that can counter a bomb or another delinquent goat trying to get the jump on you. And finally, there is a specific skill unique to each character that boils down to a stun or a mine. Oh wait, we are not done yet. You can also pick up power-ups, including a chainsaw or a hammer. Add to this the (different kind of) bombs when you reach the top that require to anticipate trajectories, and the battle for the highest point becomes particularly fierce. Will my opponent try to jump on me or bomb me? Should I prepare a mine in case they jump? Should I shield or should I attack? Should I run in this direction or the other? Should I surprise with a shortcut or not take the risk and climb normally? And so on. What this amounts to is a brilliant mind game. GoatPunks is a fast-paced mind game in which there are so many ways to tackle a problem that you are constantly having fun and putting your brain to contribution once you have mastered the basic game mechanics. 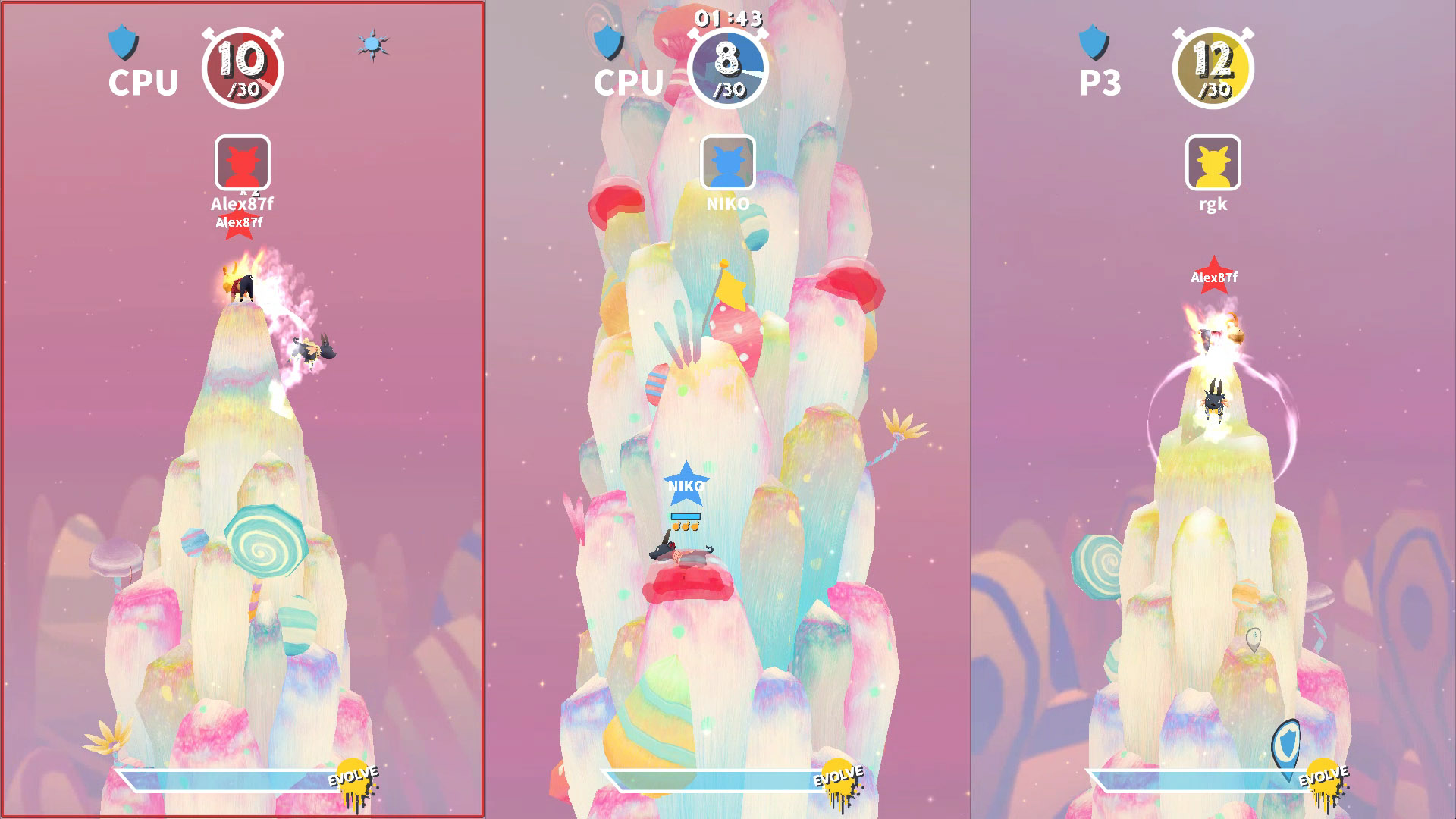 So far, there is only one game mode which is King of The Hill, but in the menu it is clear that there are more to come such as 2v2, Treasure Hunt, Survival and Capture The Flag. This can all just add to the core experience, because as it is there is already plenty enough to have fun. Oh and if you are out of friends, there is an online ranked mode with weekly leaderboards. To be honest these indie games never get populated enough for the multi-player to garner enough momentum, but it’s there. I have encountered minor lags, but it can be forgiven easily as the multi-player is still in beta. You’re better off playing with friends, but there is still a more than decent single-player mode to keep you busy. Basically, playing against the AI while sometimes an extra AI starts at the top as the “boss”. Some specific requests (shoot 10 goats, charge 4 goats and so on) give some flavour to the matches and allow you to unlock new stuff.

Despite everything, the game is not perfect. My main scapegoat is the options menu. You can’t rebind the keyboard controls, and they are awful. You should really play this with a controller. The default layout for the controllers is good, if you are not satisfied you can rebind it however I did not exactly understand how because that menu is not very easy to use. 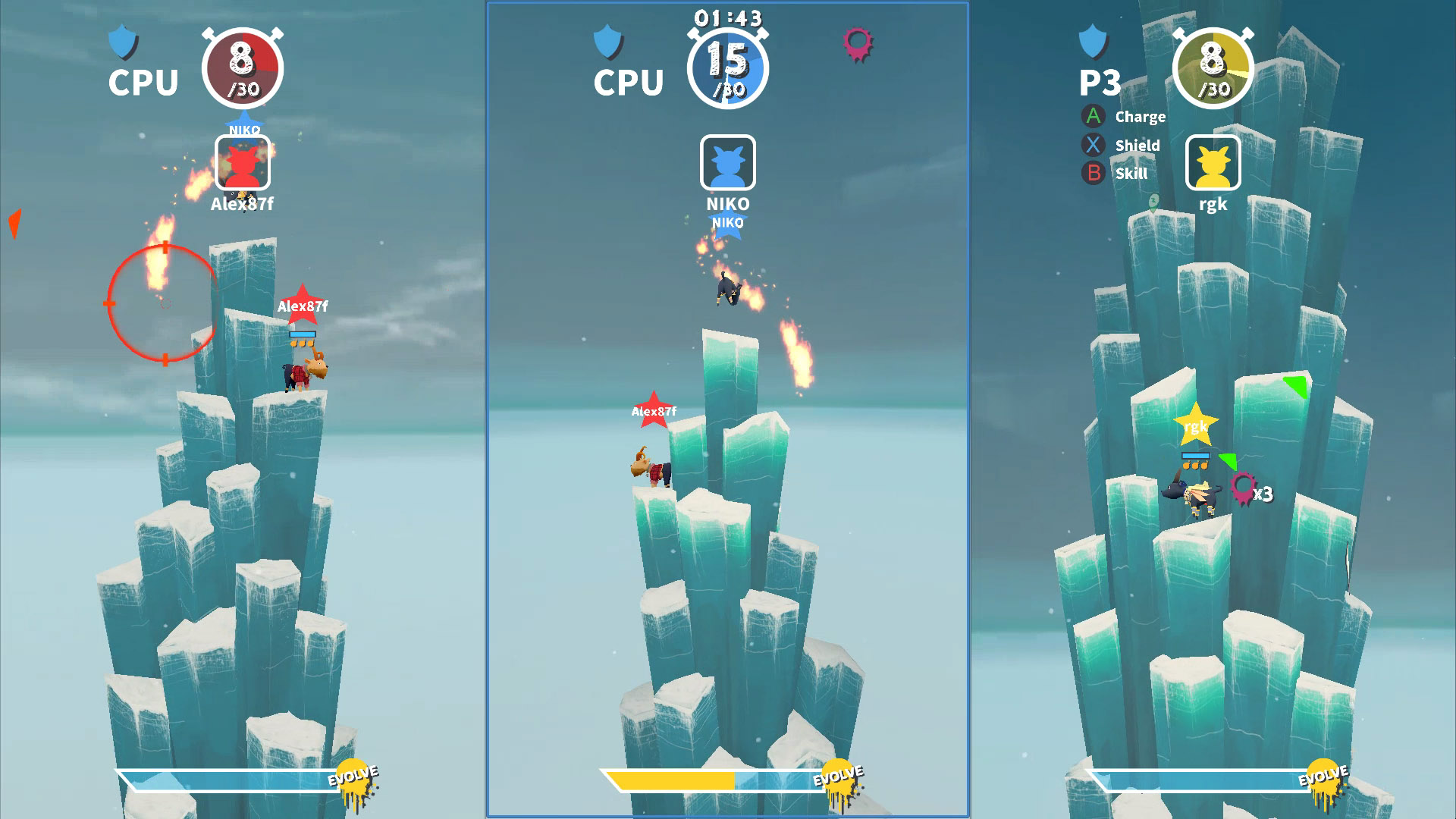 As a conclusion, I love GoatPunks. This will easily remain in my selection of fun multi-player games to play with friends. There is nothing quite like it! Very original and unique, with a brilliant focus on the mind game. A bit like playing Rock Paper Scissors Lizard Spock with split second decisions. Even though it freshly appeared on Early Access, the game is already worth its price and quite complete. Anything that will be added can only make the game more varied and replayable. Heartfelt recommendation on this one.

Here is a video if you want to see it in action: