Pit People is an adventure/turn-based strategy combo with an emphasis on humorous storyline, excellent cartoon artwork and the epic voice of Will Stamper. 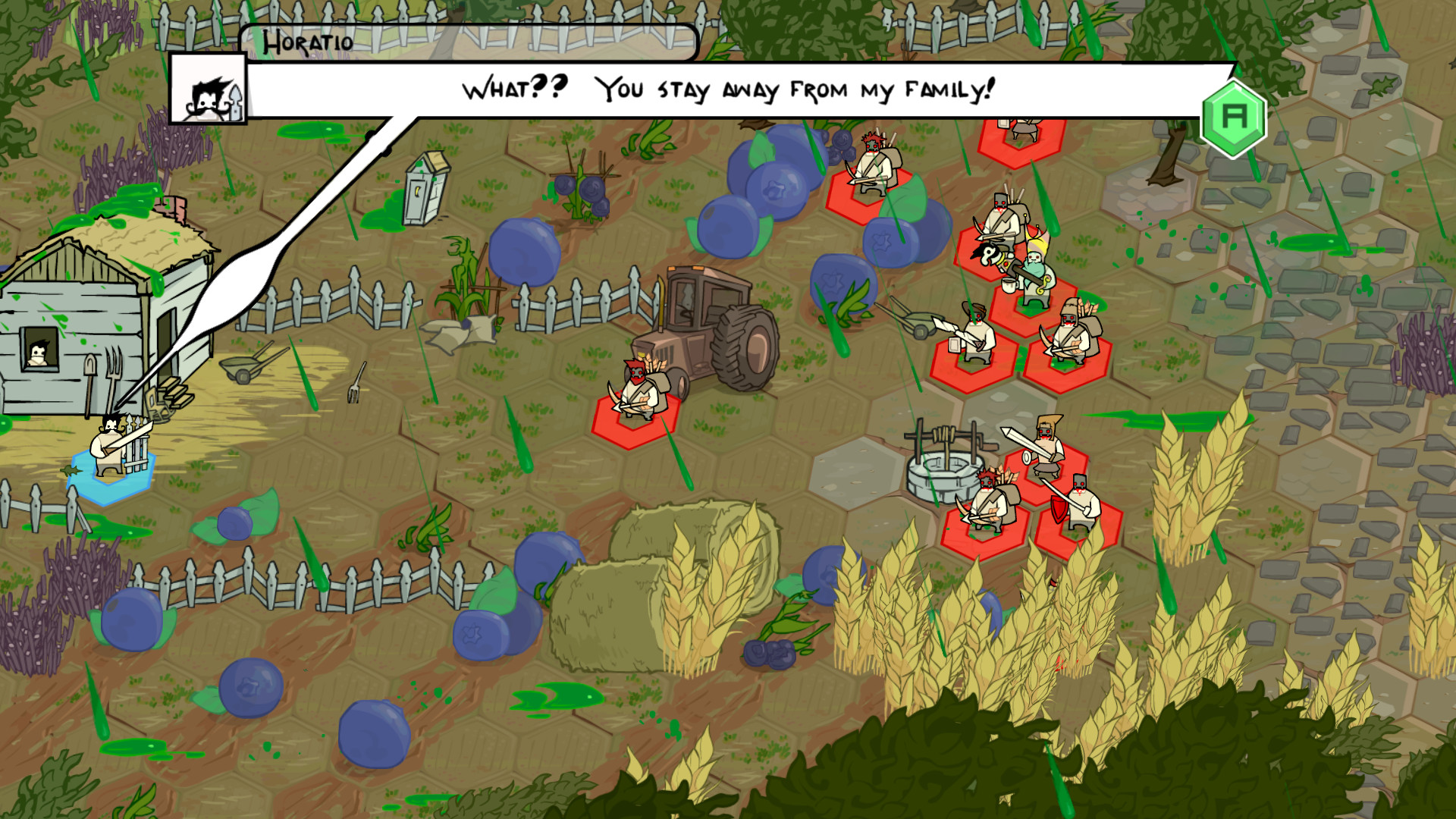 You have a home village on a world map – it occasionally gets moved around by a giant purple six-legged teddy bear, but that’s another story. You prepare your team of 6 fighters (selected from a growing pool of available fighters) with weapons and armour, then venture out in search of enemies to battle. You can either just go out and battle random enemies (they are all over the place) or else follow the quests. When you defeat an enemy, instead of wiping out all the fighters, you can capture the last one with a cage and recruit him into your squad. After a victorious battle you have to make it back to the village where all your loot is redeemed. If you’re intercepted by another enemy on the journey back you risk having to battle them and lose your loot from the first encounter, but if you pay attention you can avoid this by using the cannons on the wagon to stun the enemies and slip past them, or use nitro to mow them down!

The battles are turn-based, played out on a hex board. The way I’ve played there’s not really much thinking involved and it’s quite fast-paced. You move each fighter into position one by one then hit the spacebar to proceed, and they each make their own decisions about which enemies to hit. As they inflict damage and defeat enemy fighters they gain XP, making them stronger for future battles. The different weapons/armour you give them also make a difference to the team dynamics, if you want to get down to the nitty gritty. My 4 melee, 1 ranged and one healer has served me well so far.

Inside the village you can buy new equipment in the market with the gold you’ve made on your excursions and play around with squad customisation, replacing members and switching equipment around. You can fight the AI in the Pit (within the home village) to gain some quick XP and gold, although I haven’t had much success in there, I think I need to improve my team strength a bit more. You can use the big phone to dial up a PvP battle – I haven’t managed to get a match yet but I haven’t been too patient. This is a popular game so in general I don’t anticipate any problems finding matches should I want to get involved with that later. At the moment I have more than enough to keep me busy with the singleplayer campaign.

The quests (which you can pick up in the village) advance the storyline as you defeat and rescue various characters along the way. The cutscenes are a highly anticipated treat.

Controller is supported but mouse is better. 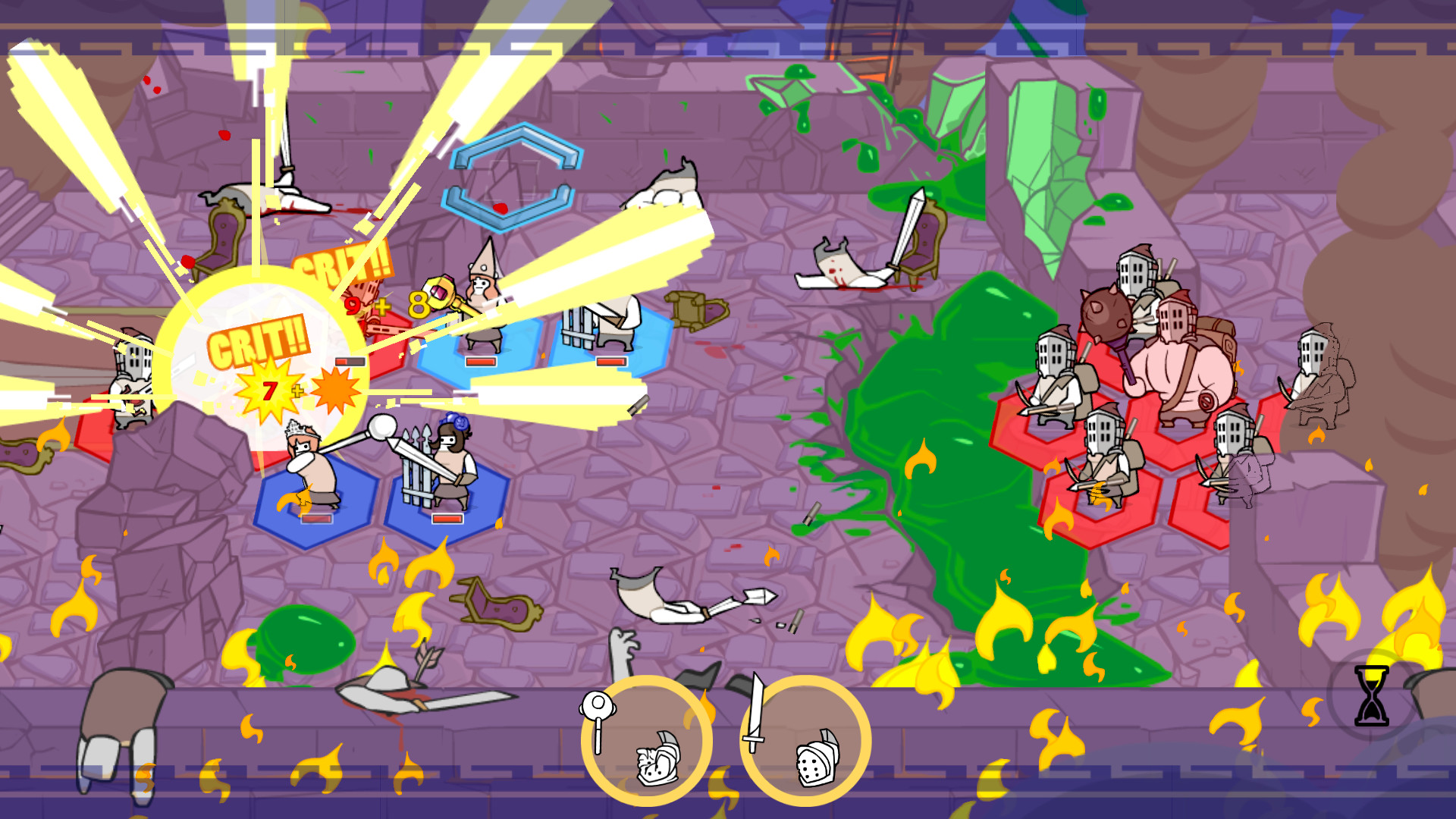 When you look closely at the cartoony graphics you realise there’s a great deal of detail here. Everywhere you go, the screen is packed with a seemingly endless array of funny looking enemies, absurd weapons and fabulous cutscenes. You never know what delightful thing you’re going to discover next and it keeps you motivated to continue.

The first thing I want to talk about is the theme tune. In my reviews I always comment on the quality of the music, but I’m always judging it as game-music, I would never dream of adding it to my actual music collection. Here is the first exception I’ve ever encountered. It’s an awesome, rocking beat that belongs in the real music charts. The down side is that I have trouble starting the game. I sit at the main menu with my mouse hovering over the start icon, my neck jerking like a strutting pigeon. When I finally manage to tear myself away from that tune and log in to the game there are more great tunes to enjoy – selectable on the gramophone in the village – it’s all very original, memorable and suits the game down to a tee.

Will Stamper’s voice acting has reached legendary status in the game world, his narration alone is worth the price of admission. There is no other voice like it. The absurd silliness and the way he yells “shut up!” is something I could listen to all day long. There is a lot of his voice in the game, but there is also a lot of content so naturally it’s rather spread out, in the cutscenes and the odd impatient comment during battles telling you to get a move on. For me it’s the main highlight of the game. 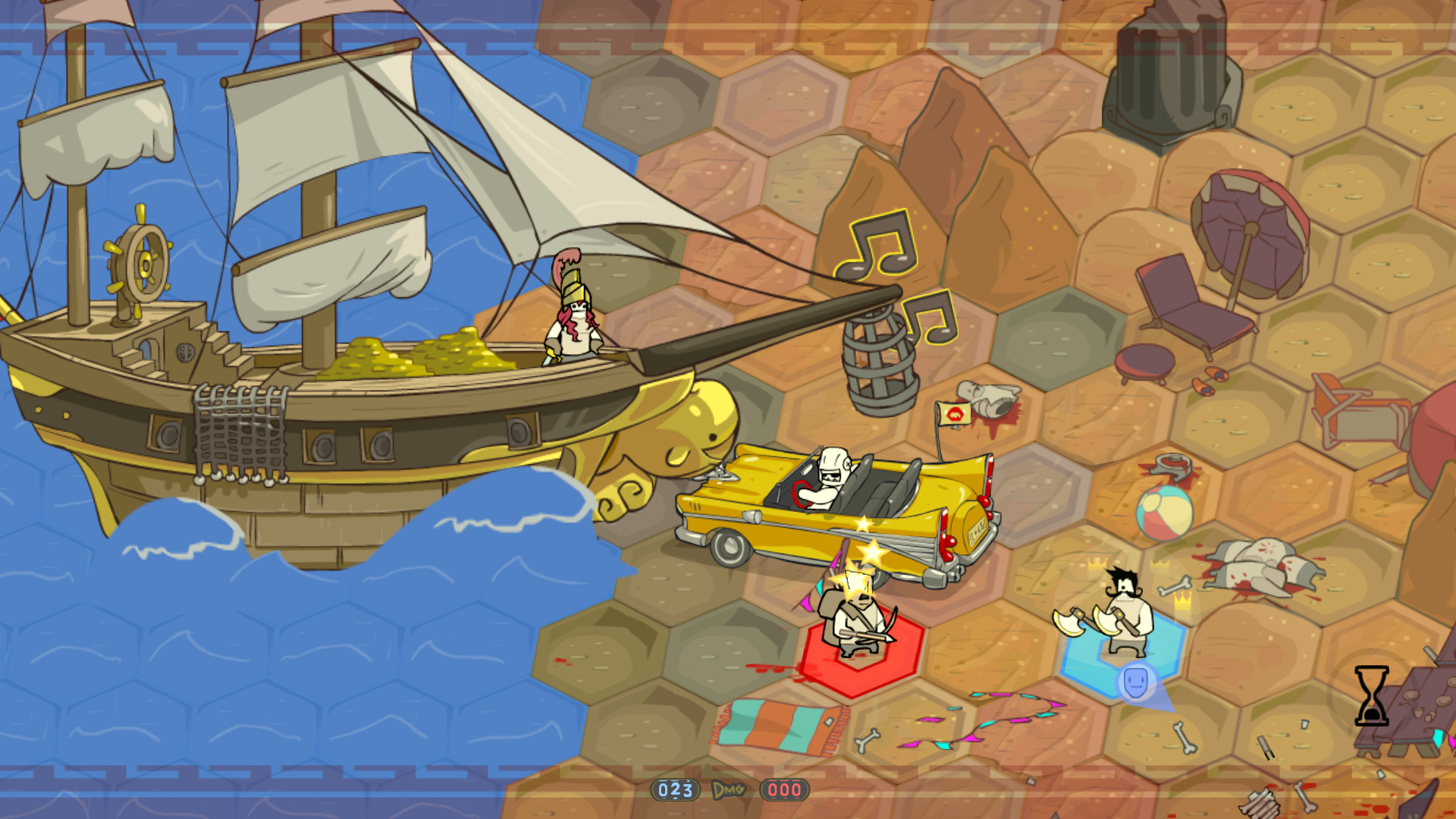 On normal setting the singleplayer campaign and quests are fairly easy. I’ve won nearly all battles by just pushing my melee fighters towards the enemy and keeping my ranged and healer further away. In the home village there’s an ‘insane difficulty’ switch that I dare not touch. I assume that you’d need to pay far more attention to the strengths and weaknesses of your team and your weapons in that mode.

The Pit is difficult even on normal setting – you have to win 2 out of 3. I can usually win the first round but my team’s health stays depleted for the next battle and I always lose. Perhaps I’ll have better luck later on when my team has levelled up more.

In conclusion, for me the enjoyment of the game is in the content so I’m glad that the battling is nice and easy and allows me to progress and discover it all without any hold-ups or frustration.

The game is in Early Access but if you weren’t aware of that fact you would never guess. There is still more content to come for the single player campaign, that’s why it’s in EA, but it already feels like a full game. Totally bug-free as far as I can tell, tons of content and it just generally feels finished and polished.

Windows only, but there is a firm promise of Mac/Linux on release. 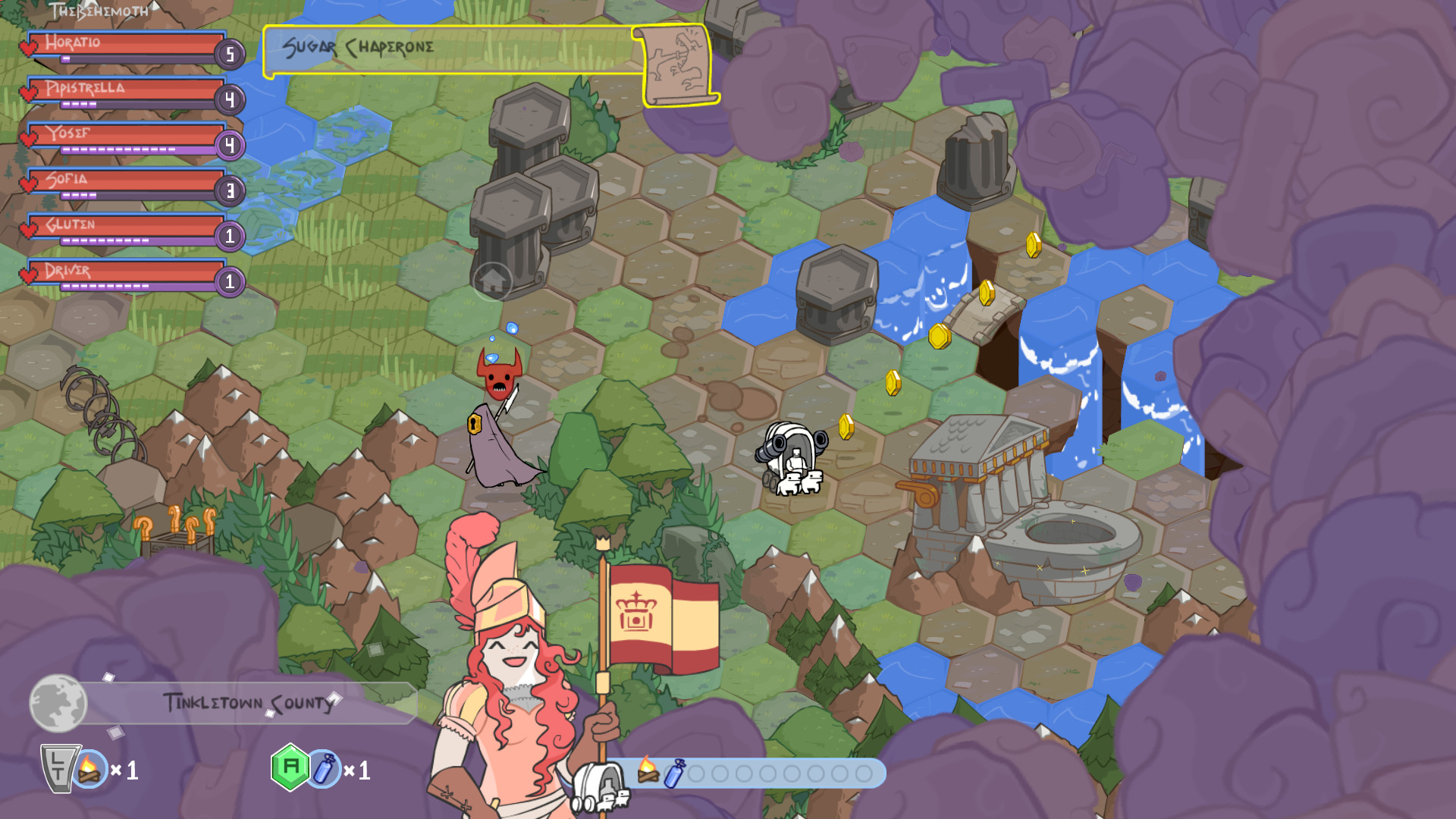 After 10 hours of gameplay I’ve barely scratched the surface. My overall progress bar currently sits at 10% so that should give you an idea of the amount of content here, not to mention online PvP multiplayer battling. It’s not only the amount of content that’s impressive, but the general quality of every aspect of it. The price right now is a steal and you should grab it right away – there will be a price increase after final release.

Achievements, cloud support, local/online co-op, local/online multiplayer. No trading cards but in this case it really doesn’t matter. If you’re going to let that influence your decision to buy then you’re crazy.

The battling gameplay isn’t exactly ground breaking or unique but it’s very well implemented and satisfying. Everything else about the game – storyline, humour, voice acting, music, artwork, animation is absolutely outstanding. If you don’t normally go for turn-based strategy, this is still a game you will love just for the bonkers fun of it all.

The Behemoth: “We Make Games”. Yes, they most certainly do.