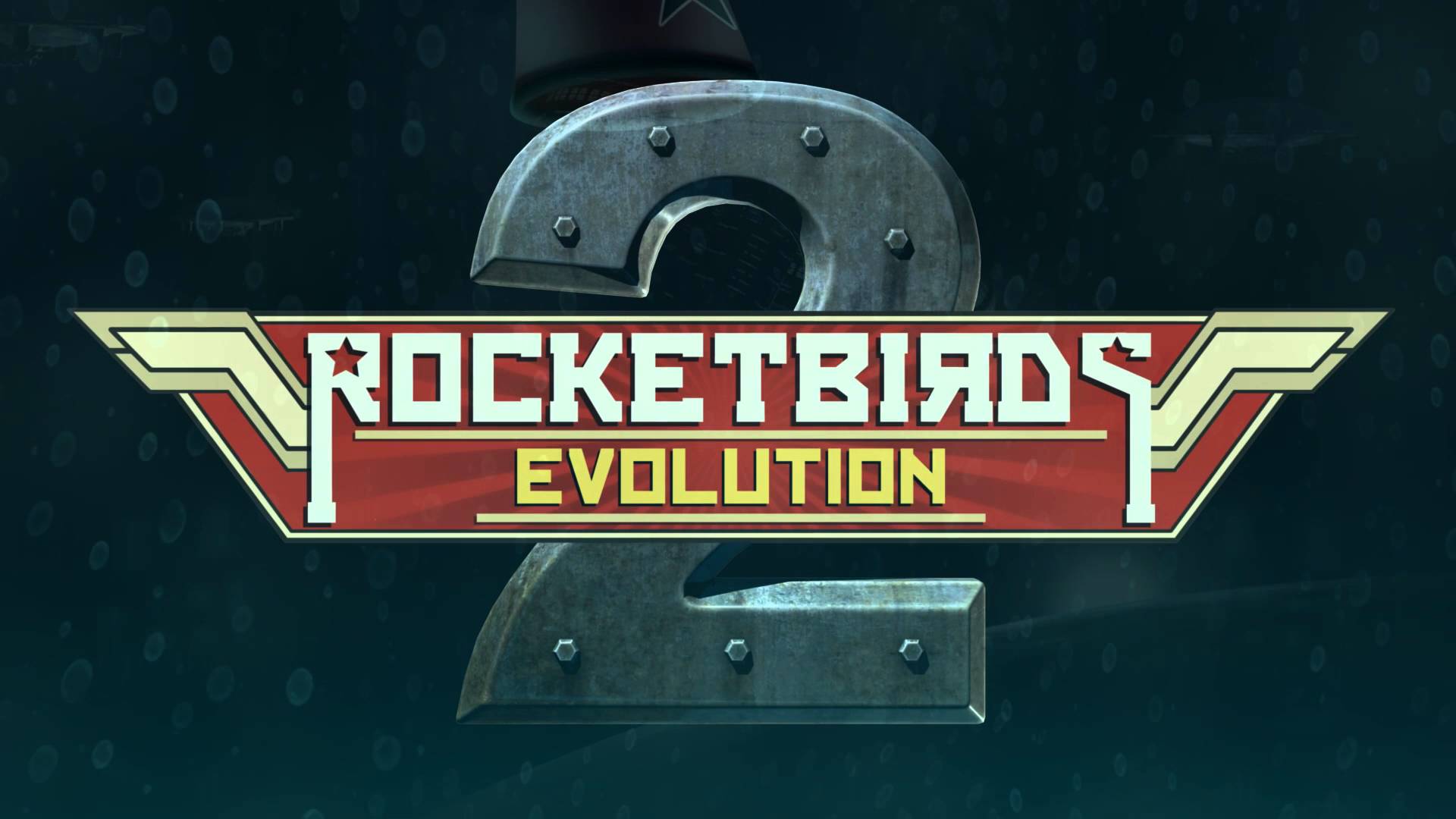 Rocketbirds 2 Evolution is the sequel to the 2012 release, Rocketbirds: Hardboiled Chicken, a game which I felt was somewhat under appreciated. As a fan of the first game, I must say that the sequel manages to live up to its expectations and, despite a slight change in the game’s pacing, is much better in every way possible. 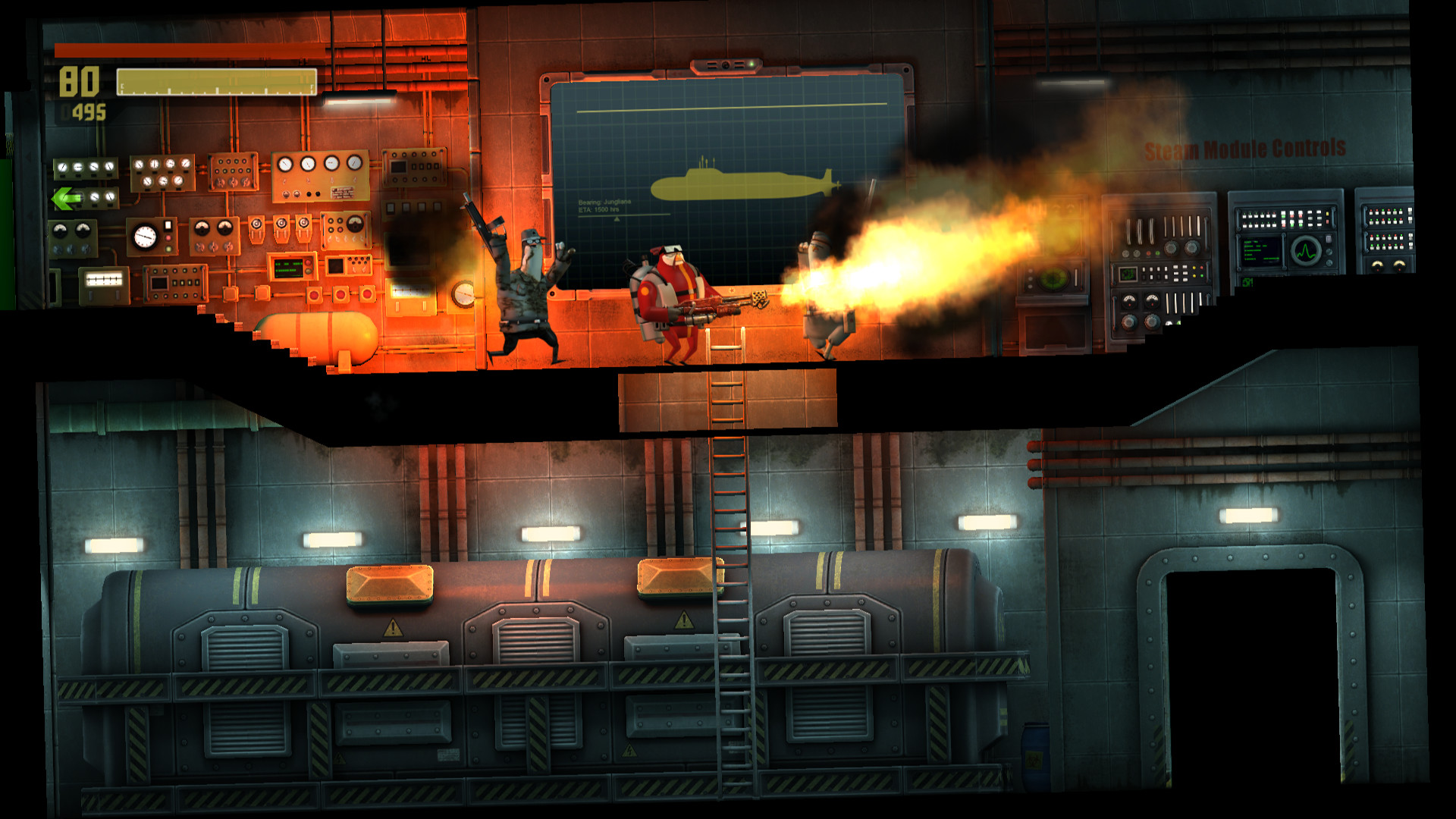 In short, the game is an action platformer which focuses a lot on shooting, with some slight customization on player stats by changing the way your character looks, while at the same time offering you a wide range of weapons for you to choose from, each unique on their own way. Rocketbirds 2 changed the pacing of the gameplay when compared to the first game of the series, now it is a lot more fast paced and requires more dexterity and skill on the player’s part in order to succeed. In any case, one thing that really surprised me was the fact that the game is divided into 2 parts, with the first one being composed of 6 unique chapters and only playable in single-player. On the other hand, the second part offers the ability to play the game with up to 3 other players, either online or locally, as well as the option to choose from a wide range of different characters for you to play as. Still, every time I was lucky enough to find an online lobby I would always get a “Network error” when trying to join, thus only being able to briefly try out the co-op when I plugged in another controller. 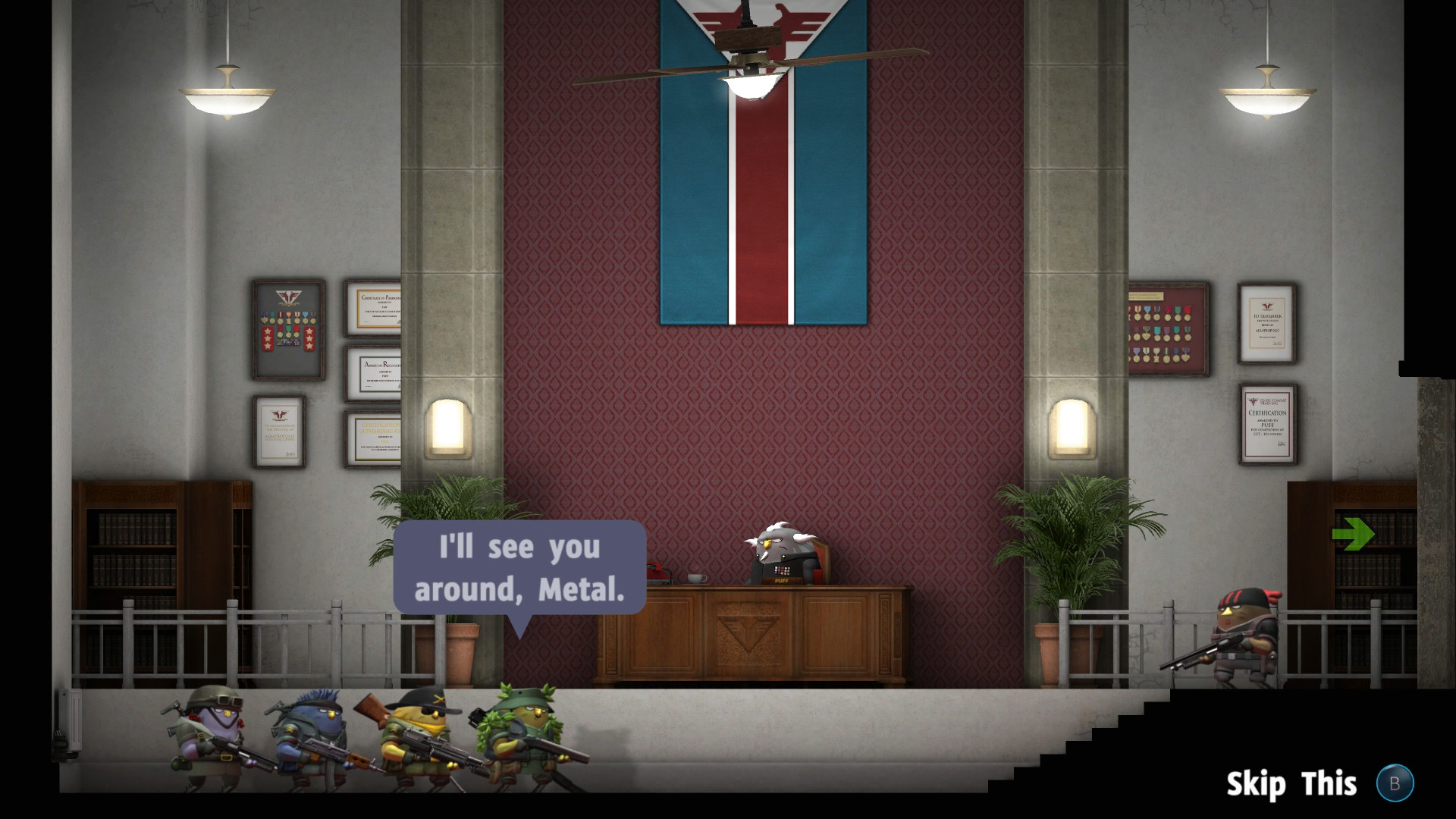 In Part 1 you play as Hardboiled Chicken and you take off right after the events of the first game, where you’ll be investigating a rather mysterious plot involving Putzki, the leader of the Penguin Army. This part of the game is pretty straightforward, since you’ll be going from one end of the level to another and upon completion you’ll jump right to the next mission. That said, the levels layout is arranged in a metroidvania sort of way, meaning you’ll end up returning to places where you have previously been because you’ve acquired the means to progress through that specific area, such as keycards for example, and there are also plenty of secret areas for you to access. Whenever you enter a new room enemies will try activating the alarm with their smartphones, which will lock every door of the room and cause more enemies to spawn. That said, it is possible for you to stun or kill enemies before they activate the alarm, so sometimes you might find that rushing the enemies is the best option. 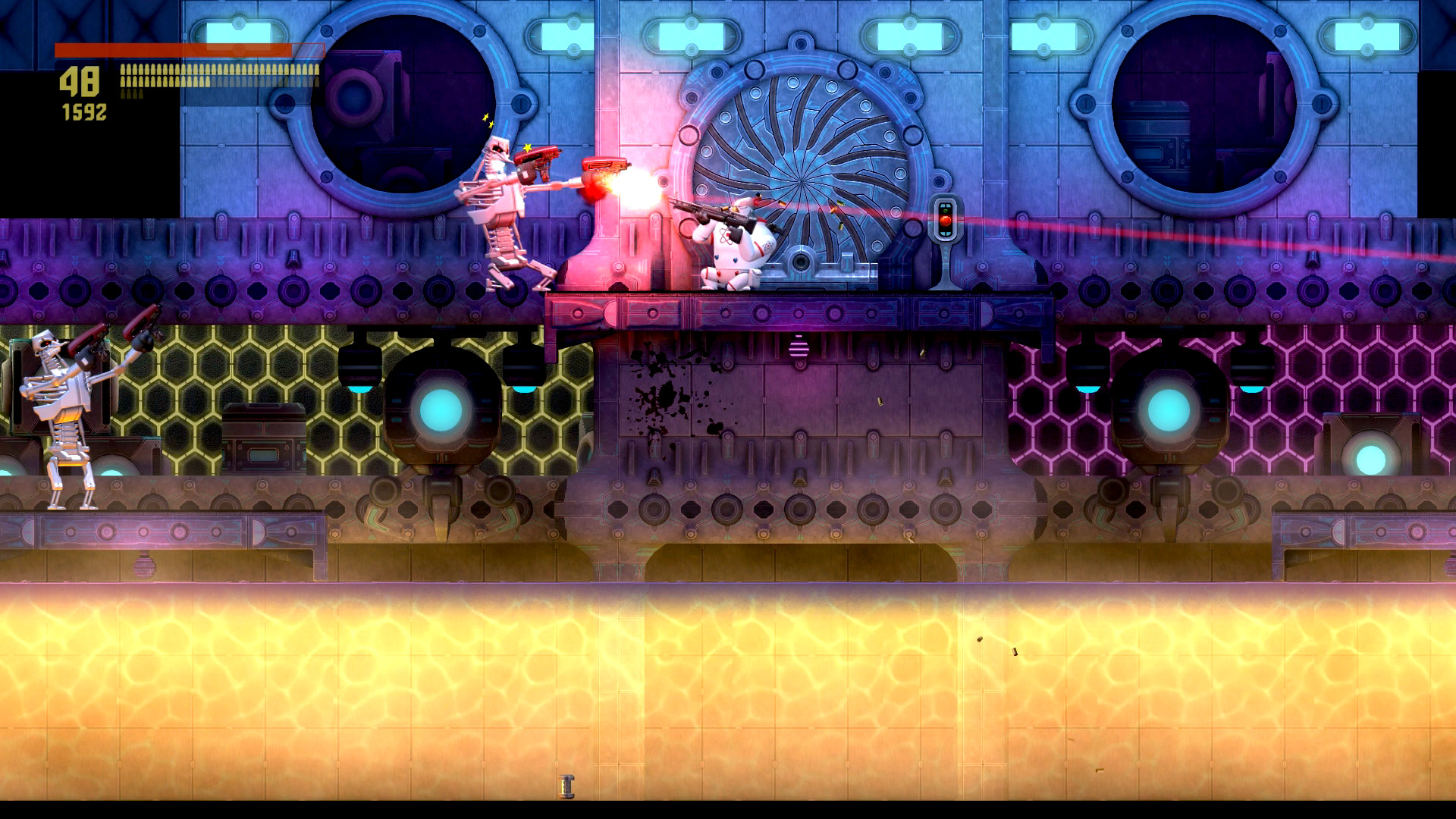 The game does have its fair share of different enemy types and looks, and each of the four zones you’ll visit has its own types of enemies. With that in mind, there are some enemy types which are very obnoxious to deal with, like those who just pull you towards them with some sort of tractor beam leaving you pretty much no choice except waiting for them to stop attacking you. However, I do like the fact that there are some enemies that are best approached in a certain way, such as enemies with shields, which require you to flank them or strike them from above in order to make them vulnerable. Still, the game does have its fair share of mini-bosses which, while they are unique in their own way, I didn’t find them particularly challenging, since once you’ve figured out their attacks it was pretty easy to avoid getting hit and finishing them off. 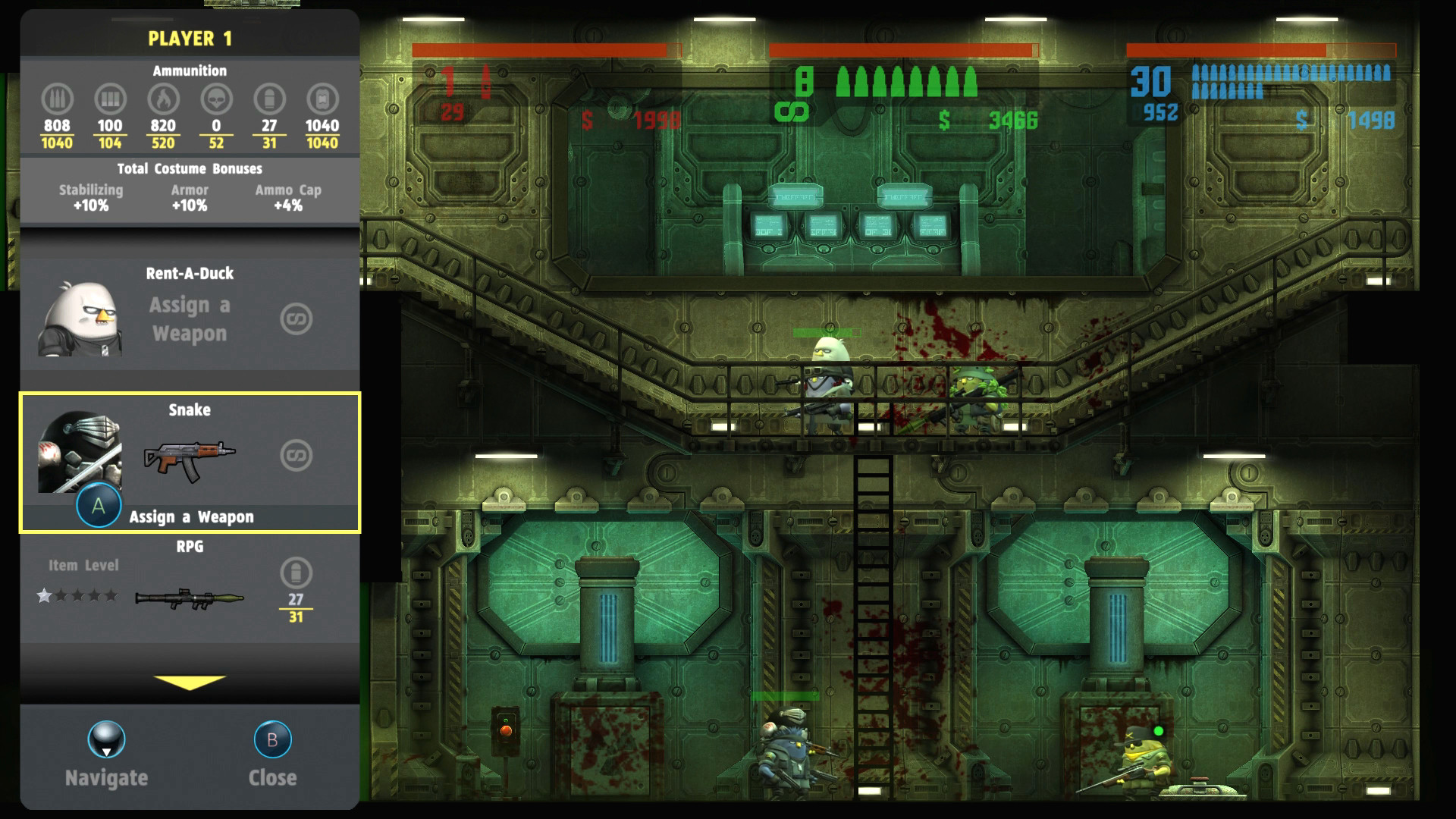 Considering this is a platformer in which the combat is 100% shooting, it would be a shame if the game’s arsenal didn’t live up to it. Taking that into consideration, I’m happy to say that Rocketbirds 2 weapon variety is more than enough for your needs and enjoyment, with over 100 upgradable weapons with distinct looks and, most of them, feeling unique in their own way. From the usual machine guns, sniper rifles, shotguns to electrical rifles, miniguns, RPGs and laser beams this game has it all. While you need to manage your ammunition, there are plenty of ammo drops so I never found myself struggling with ammo, except during some cases on Part 2. 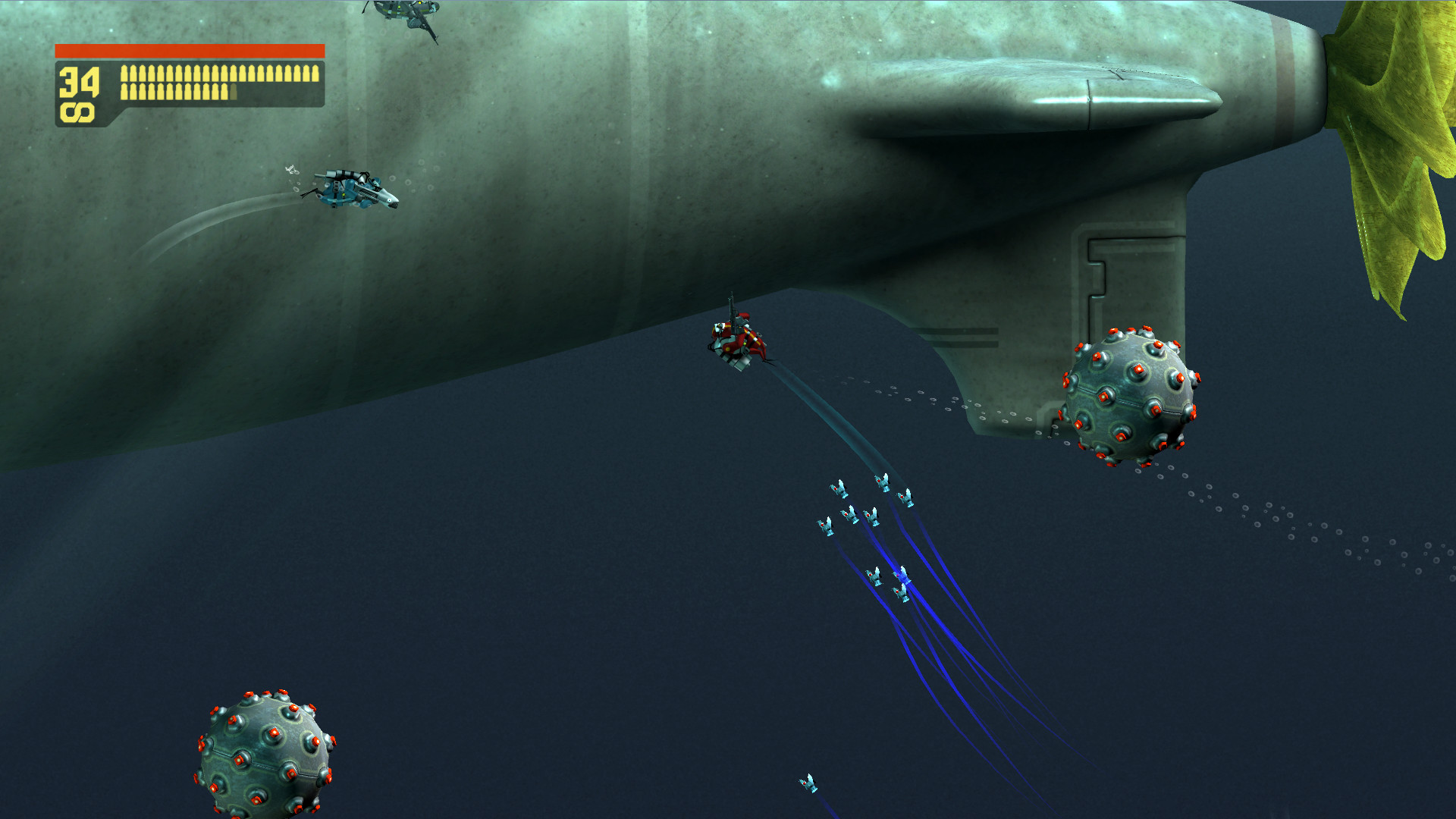 The fact that each weapon looks unique and is easily distinguishable from another is probably due to the game’s characteristic visuals. While the game certainly isn’t a graphical wonderland, I am a huge fan of the way it looks, it conveys perfectly the type of setting it is trying to achieve. That said, despite having a very modern look to them, the levels feel very old school, especially when you’re going up and down different floors and getting key cards in order to progress throughout the level. I also like the way the background of the levels turns sideways as you move left or right, it helps add some sort of 3D look to the game while it plays like a 2D game. 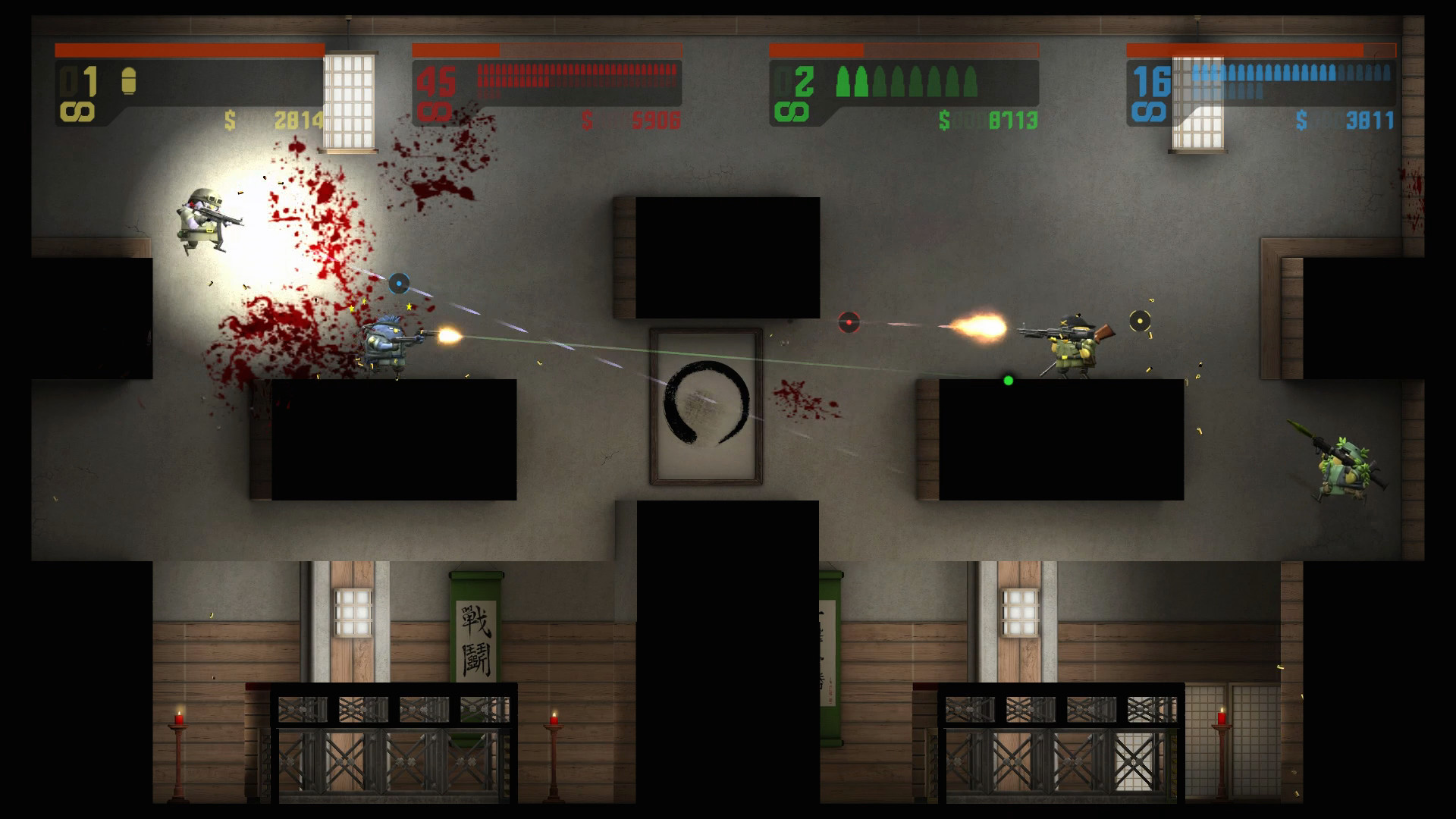 In all honesty I believe that Part 1 is where the game really shines and I think that’s because on Part 1 the game focuses on Hardboiled Chicken as a character and it features some nice little mechanics such as being able to control enemies with a smartphone jammer. Here the game features some really funny dialogue via conversations between enemies and your fellow companion Metal. These segments provide a brilliant combination of puns and references filled with humour, silliness and, best of all, the game takes itself too serious while being self aware of what it really is. The voices for the enemies and for your character are spot on, while sounding rather corny, and while that usually is not a good sign in most games, in Rocketbirds that is precisely the perfect fit for the vibe the game has going on for it. You’d never think that a game about fighting penguins and other animals would have so much gore to it but, if left on by default, you can see enemy heads popping off and blood all over the walls, which I think adds even more to the whole experience making the game even more silly. 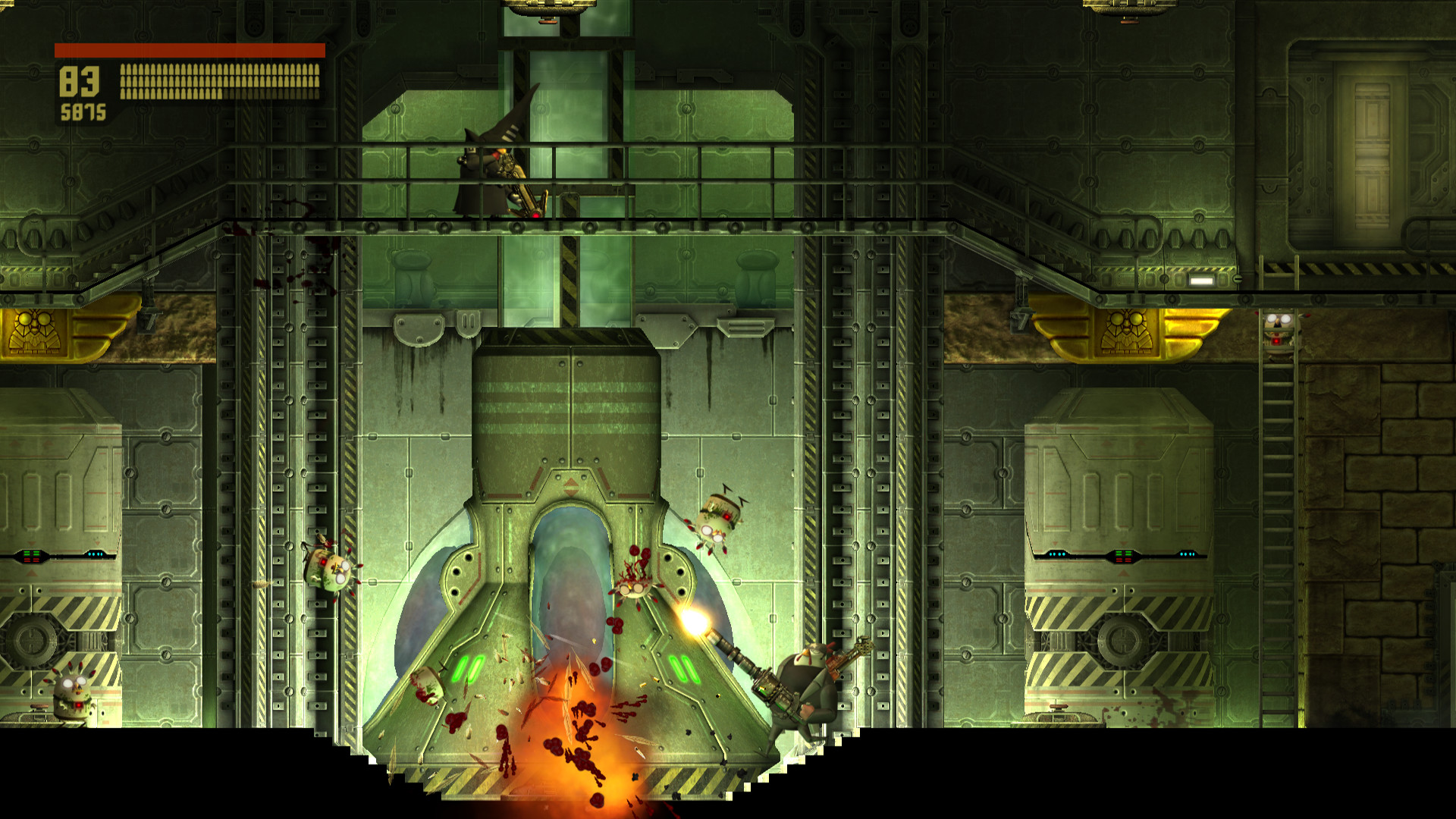 Despite all the good things about Part 1, I have really mixed feelings about Part 2. On one hand I think it’s possibly the weakest part of the game while also being the most fun to play, if you’re playing it with someone else that is, which was not the case for me. You’ll start off by clearing your base from the invading Penguin Army, and after successfully clearing it you will be able to carry out rescue operations for your fellow comrades that got captured. Instead of being rather linear like Part 1 was, in Part 2 you get to walk around your base and do various different things. You can buy weapons or upgrade them, buy more ammo, play PvP, start new missions and even rent AI companions which you can stack on top of you and they will do their best to shoot anything that they see. 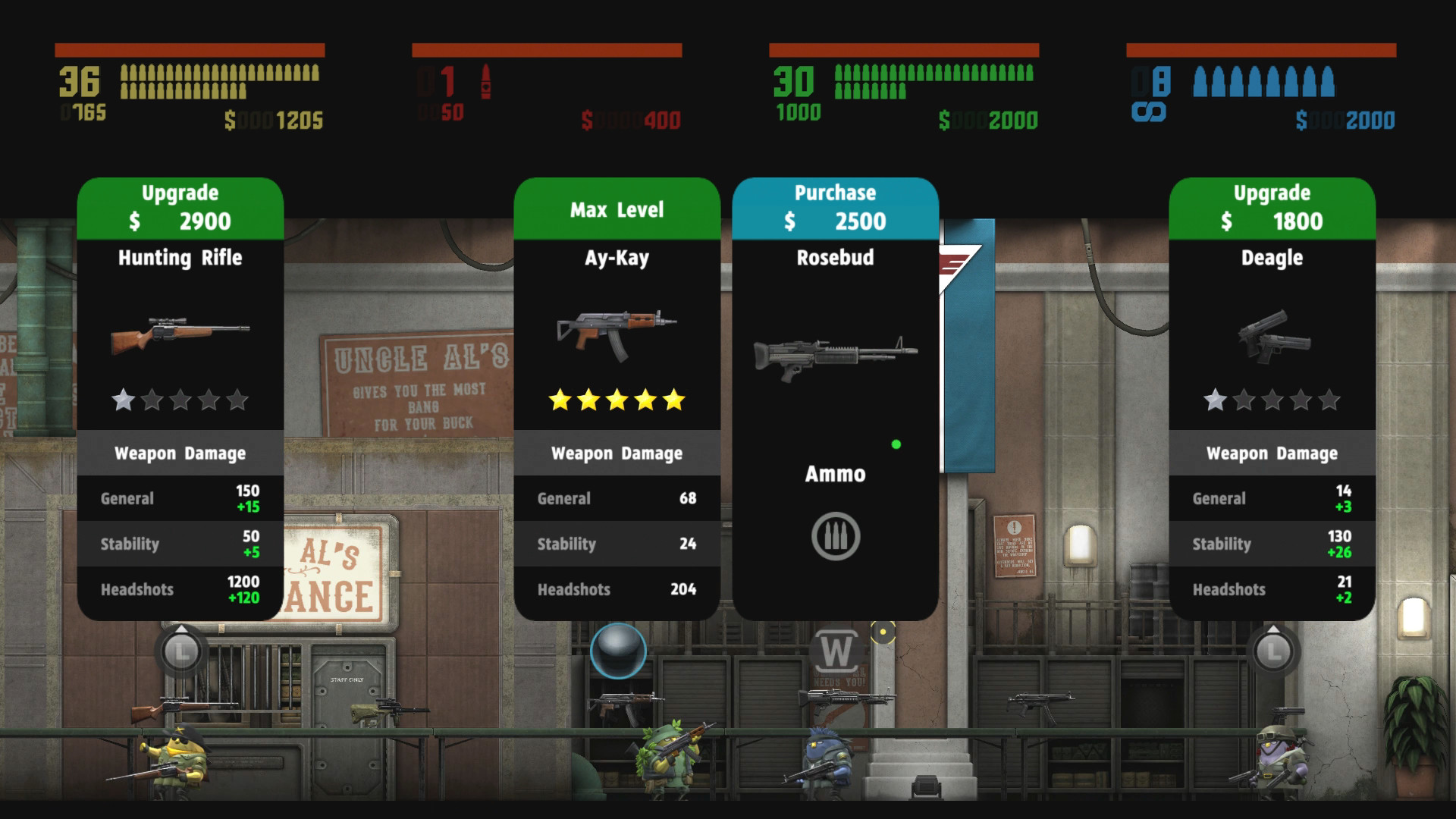 As you play through the story you’ll unlock new areas where you can start new missions, where you’ll be able to choose from 3 types of different missions, it can be a quick mission, a normal mission with artifacts for you to collect or a big mission with both artifacts and gear to collect. The game has a total of 9 artifacts and collecting them all is required to gain access to the last area. Still, you can repeat missions as much as you’d like in order to get money to fully upgrade your weapon of choice or to try out new ones.

Even though the mission layouts are randomly generated from a set of hand crafted rooms, after the first few missions, when the dialogue became pretty much non-existent and the voice acting suddenly vanished, the game felt like a chore to play and that is actually sad, considering how great the first half of the game was. In essence Part 2 was designed to serve as sort of an epilogue and prologue to the events of Part 1 while, at the same time, providing a rather enjoyable co-op experience. 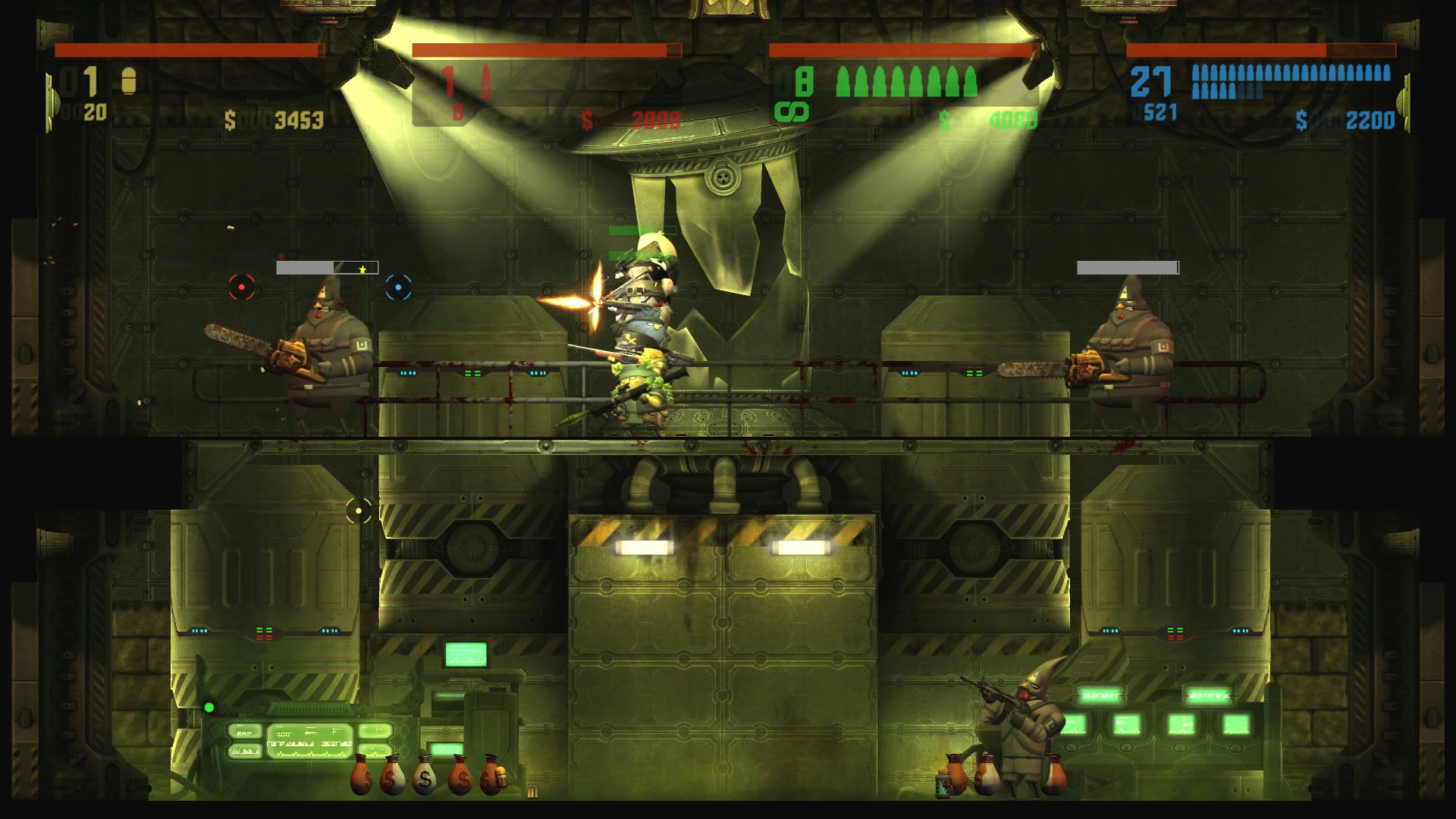 To sum things up, like I’ve mentioned before, where the game really shines is in Part 1. The humour, the characters, the dialogues, the absolutely thrilling and enjoyable soundtrack, the charming visuals, the tons of customization options, the small mechanics that make the levels unique in their own way, all these things contribute to make this a much more enjoyable game than the first of the series. Still, Part 2 can be enjoyable on your own for a while, but if you can get someone to play the game with you I highly recommend it. All in all Rocketbirds 2 Evolution offers an amazing solo campaign and a rather fun co-op mode and for that I think it’s a pretty good game in general and I’m looking forward to see if there’ll be a Rocketbirds 3.