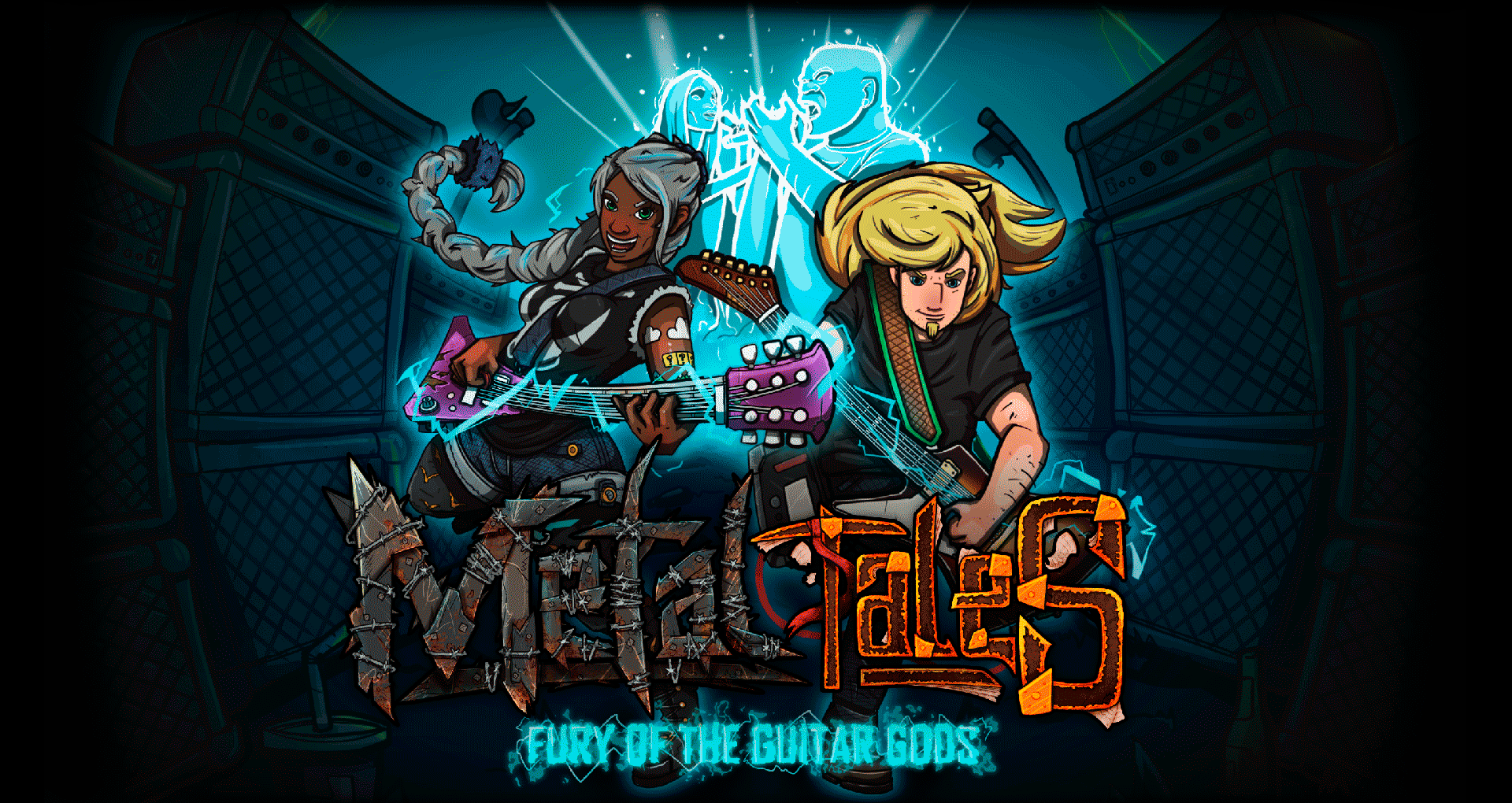 by Dead Parrot14 February 20176 min readAdd comment
Metal Tales: Fury of the Guitar Gods is a top-down, rogue-like, twin-stick shooter. The game is in the same vein as “The Binding of Issac” or “Pixel Boy and the Ever Expanding Dungeon”. The game reminds me a lot of “Brutal Legend” due to the incorporation of Metal music as it’s theme. You navigate your character through different rooms, shooting down enemies with your electric guitar while collecting power-ups and facing off against unique bosses at the end of each stage. 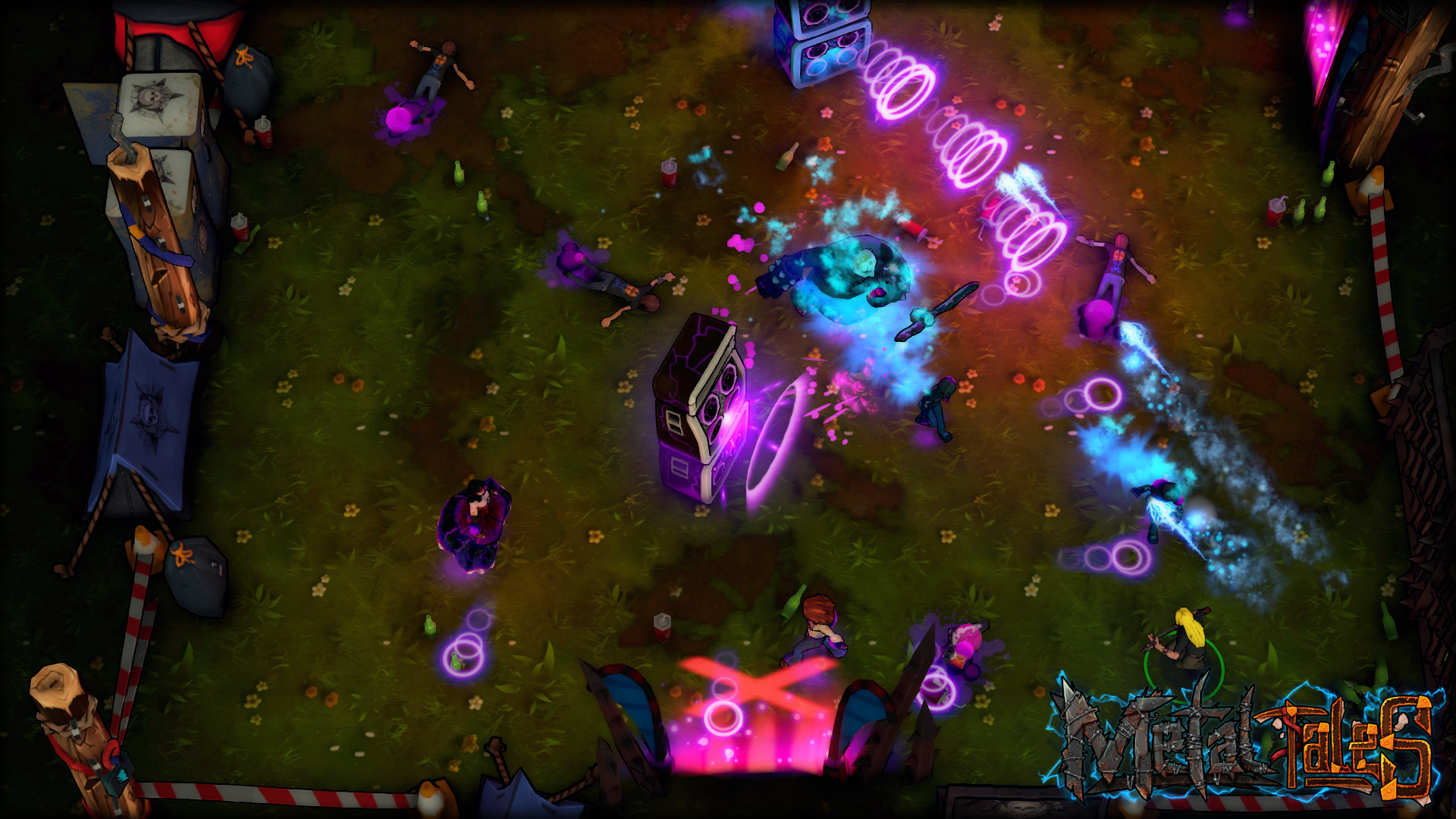 The visual assets of the game are well done. The opening comics are very well drawn and contributes to the overall theme and storytelling of the title. The 3D models of the game are decent and although the screen can become cluttered every once in awhile, the game does a pretty good job of distinguishing objects and enemies. There are quite a few flashy effects and attacks that the main character can perform, though most of the attacks do look similar. Before fighting a boss, the game will cut to a little scene introducing the boss. This little introduction scene is pretty neat, and is a nice touch to the game. The animation could benefit from being a bit higher quality. Sometimes it seems that the game props, backgrounds and object designs stray away from the overall theme of the game, but the graphic assets do get the job done. The game is not very demanding and can run on a lower – mid tier graphics card and CPU just fine. 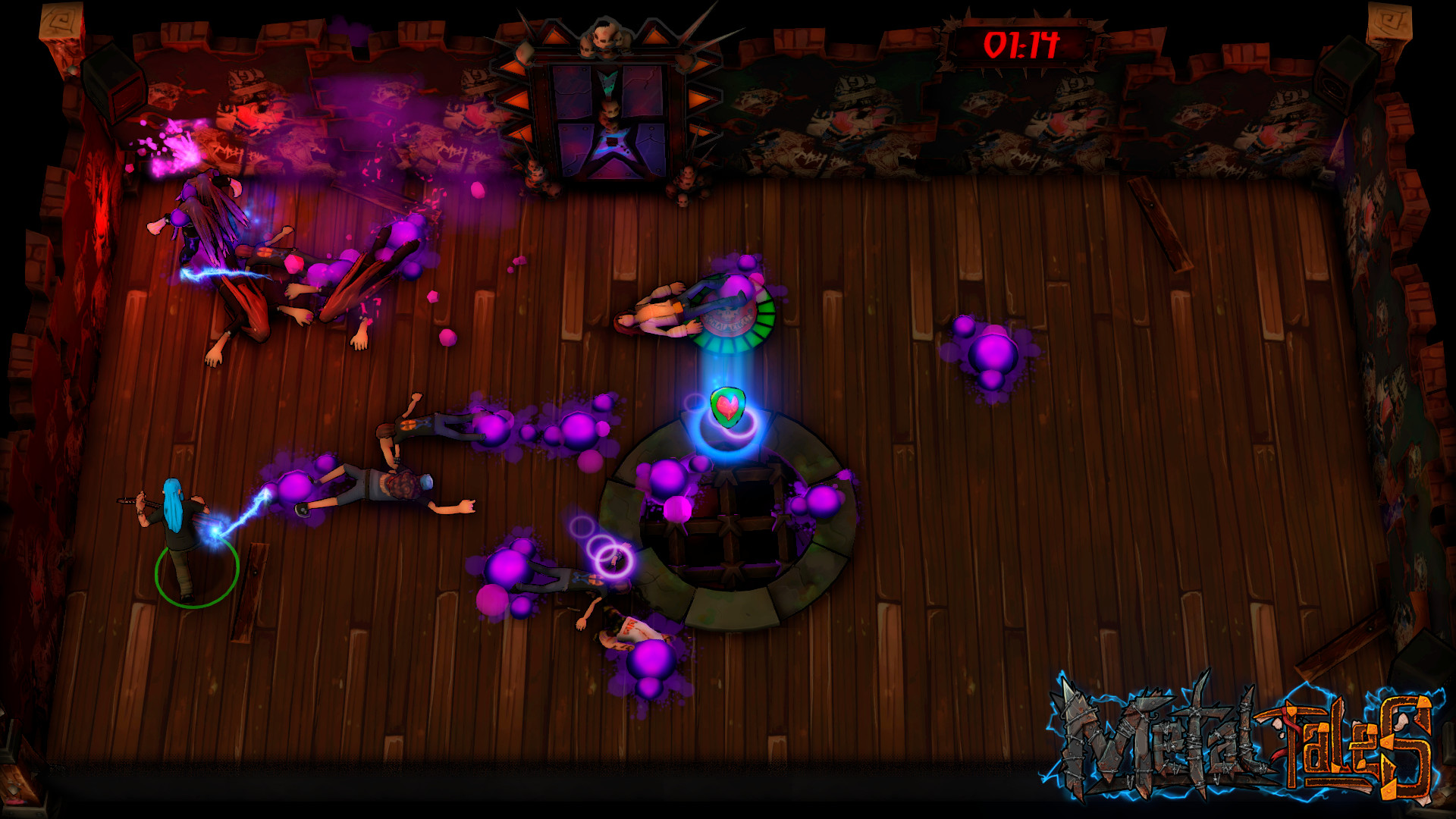 The soundtrack is as you would expect; all Metal. The game is chock full of Metal music and seems to have quite a number of tracks. There’s even a jukebox within the game that you can use to change the current song. The soundtrack of the game fits the motif of the game completely. The rest of the sound effects within the game are very standard but again, get the job done.

The mechanics of the game are very solid and simple. It plays like most games in this genre. You control your character with either the keyboard and mouse or a game-pad (the keys are rebind-able). You traverse through procedurally generated levels, going from room to room shooting down enemies and collecting any power-ups or coins you may find along the way. The goal is to reach the boss room within each stage, defeat the boss, and then move on to the next stage. 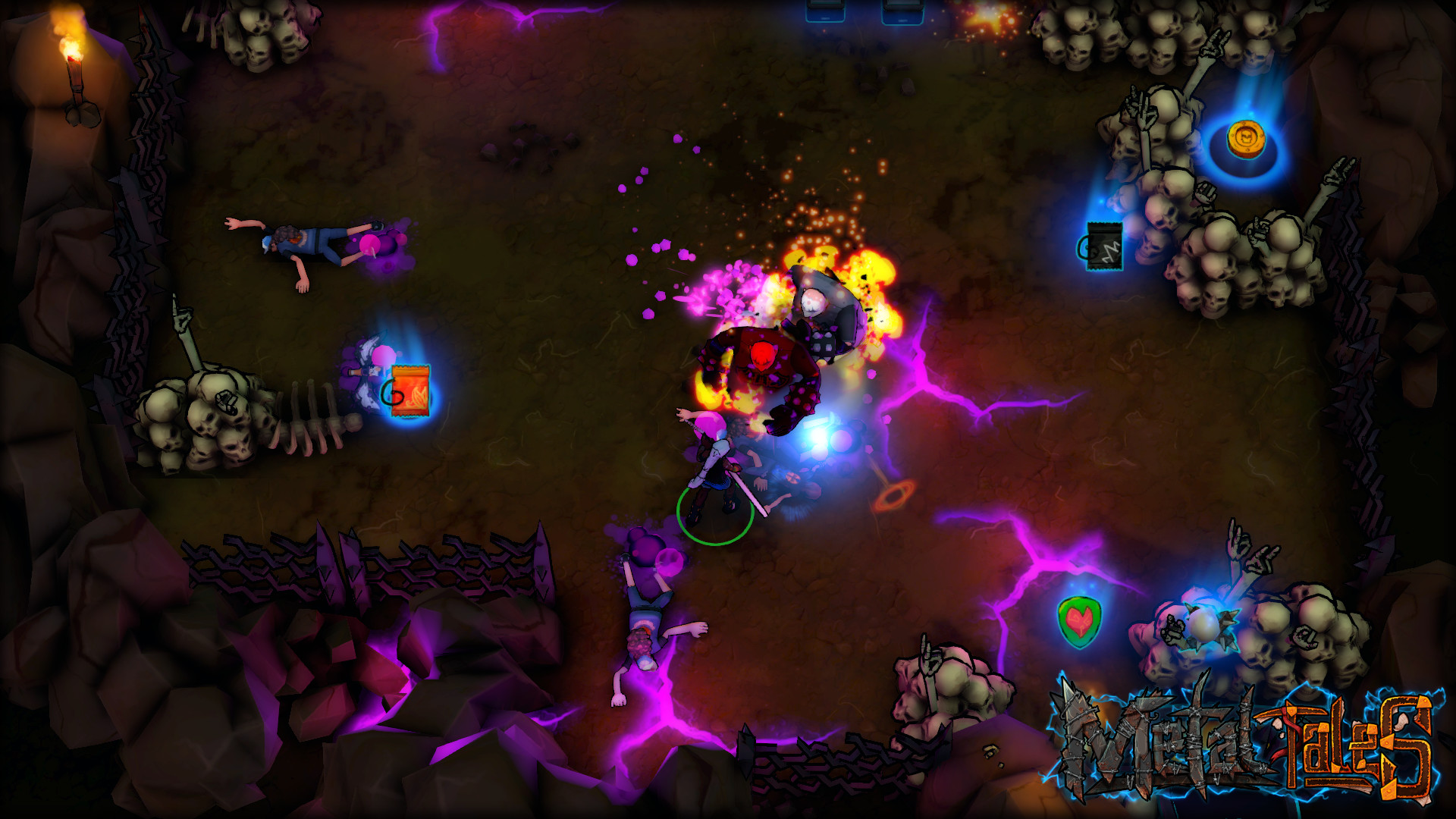 Each room is cleared once all enemies in the room have been defeated. There are a few different types of rooms within the game; enemy rooms, treasure rooms, challenge rooms, obstacle rooms, shops, and the boss room. Enemy rooms, as the name implies, contains enemies that you must defeat. Treasure rooms contain a chest that can be opened if you’re able to get it to it within the room. Challenge rooms have a button in upper middle portion the room that once activated; enemies will spawn in middle of the room and have a limited amount of time to be defeated. Once these enemies are defeated, a power-up will appear within the room. Obstacle rooms consist of environmental hazards that the player must overcome to reach an area with a power-up. Some rooms will end up being shops, and here; you’re able to purchase a power-up from a choice of three using the coins you’ve collected. The boss room houses one of the game’s bosses that you must defeat in order move on to the next stage. 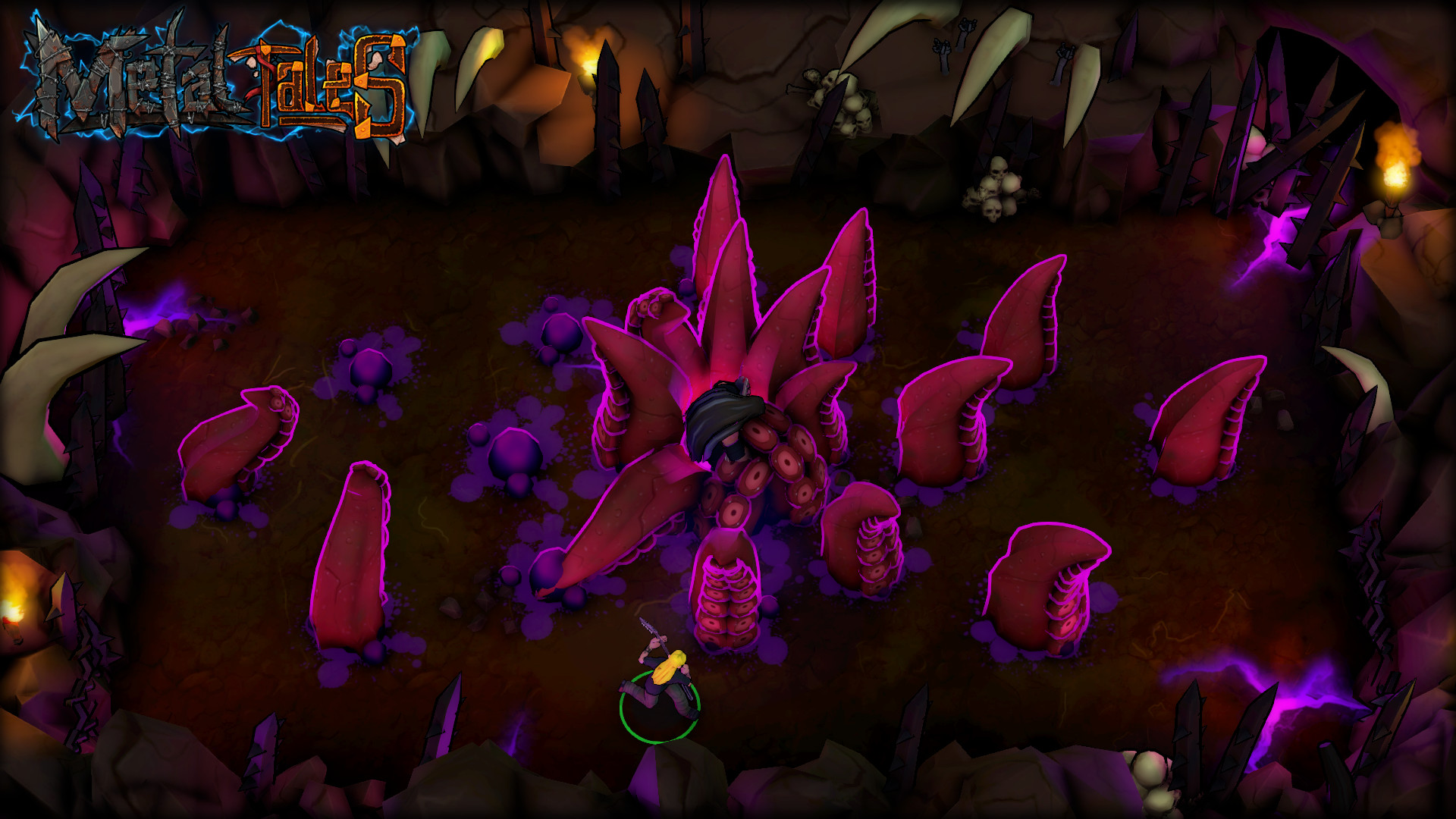 There’s a few different types of enemies within the game. Some have projectiles, some run at you to damage you, and some may just randomly attack certain parts of the room. Your life total is indicated by guitar picks, and are removed when your character takes damage. After you’ve exhausted all guitar picks, you lose the game and must restart from the beginning. The progression within the game works with a mission system. You are given tasks that you must perform while playing the game. After completing these tasks, you are granted a certain amount of points to use in the upgrade store between play-throughs or on the main menu. These upgrades are persistent through each play and all benefit the player in some way. The game also features the use of different characters, each with their own unique stat-line, though some of these characters must be unlocked via playing the game.

The game will progressively become more difficult as you traverse each stage, with more enemies to fight, obstacles to overcome and more difficult bosses to face. Precision and dexterity when it comes to shooting an enemy while simultaneously dodging attacks is a key part of the gameplay. 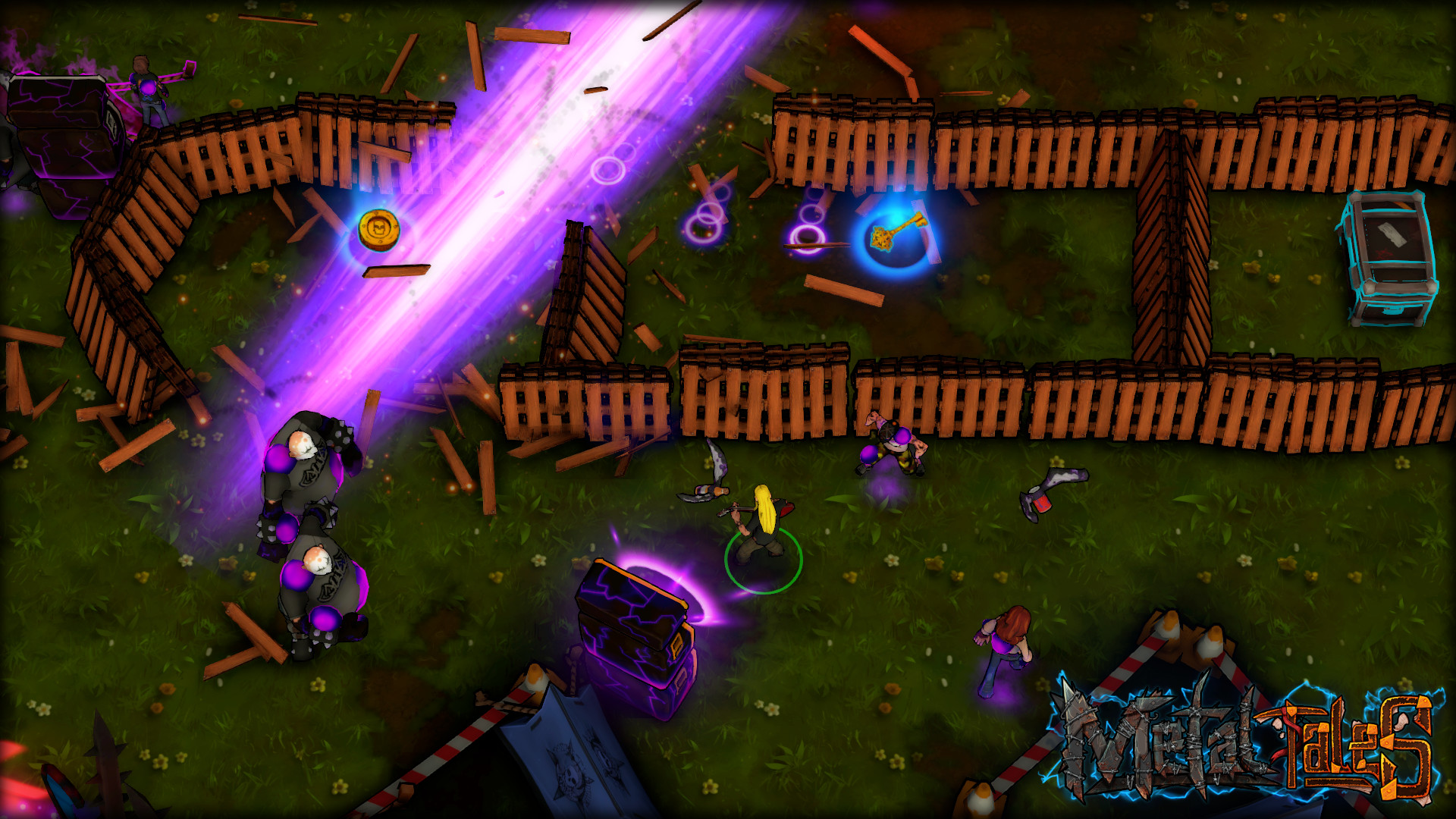 The game is fun though I think I’d enjoy it a bit more if the enemies weren’t so bullet spongy. Though it may be that I haven’t found a powerful enough weapon or bought enough upgrades to make the game easier for myself. That being said, I believe the game was meant to be difficult in the first place. I personally do not listen to Metal music though I do respect and appreciate this title for employing that genre as it’s theme. I do think that fans of this type of music would enjoy playing this game.