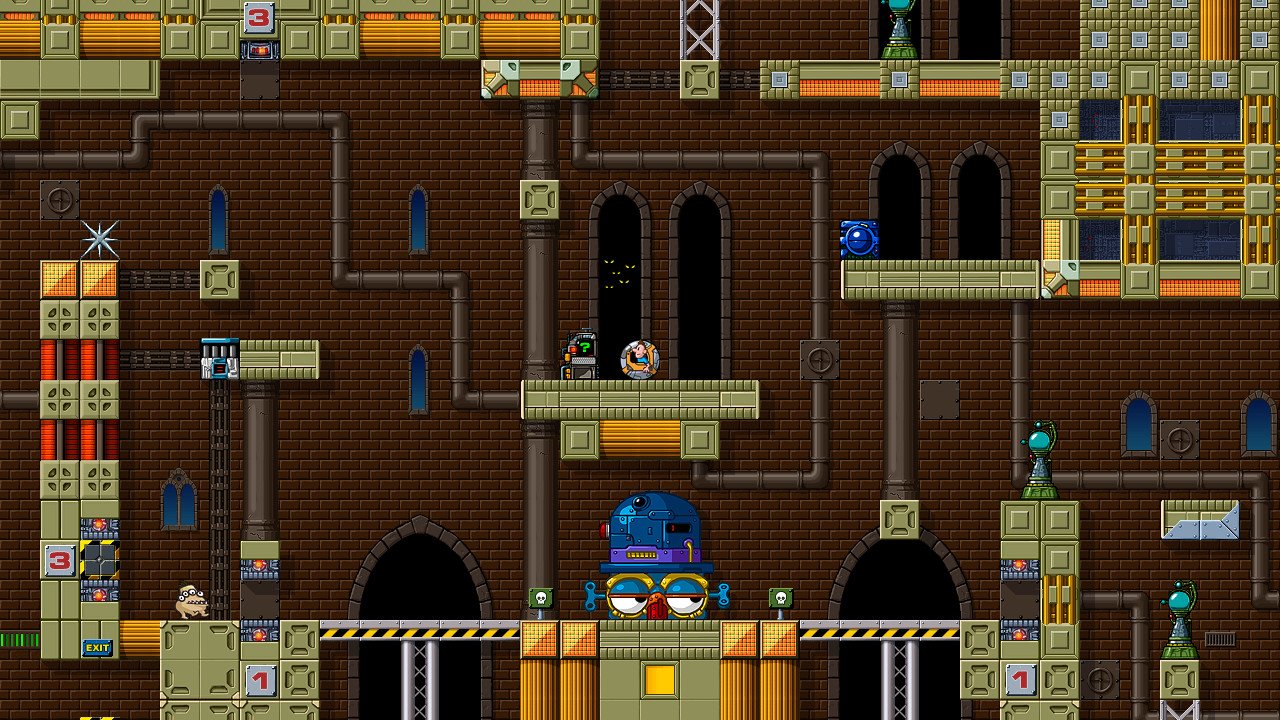 A group of teen boys’ day of skateboarding goes horribly wrong when one of them falls into a pipe and ends up in a mad scientist’s mansion, where the aforementioned genius is also now trapped because of a failed experiment. 191 levels to skateboard, fly, arrange boxes, switch levers and play with bombs. If you have kids this game is a surefire hit with them, but for us adults it’s way too easy. It has its moments and atmosphere but the underlying feeling stays with you, throughout the whole game, that it’s aimed mainly at the youngsters. 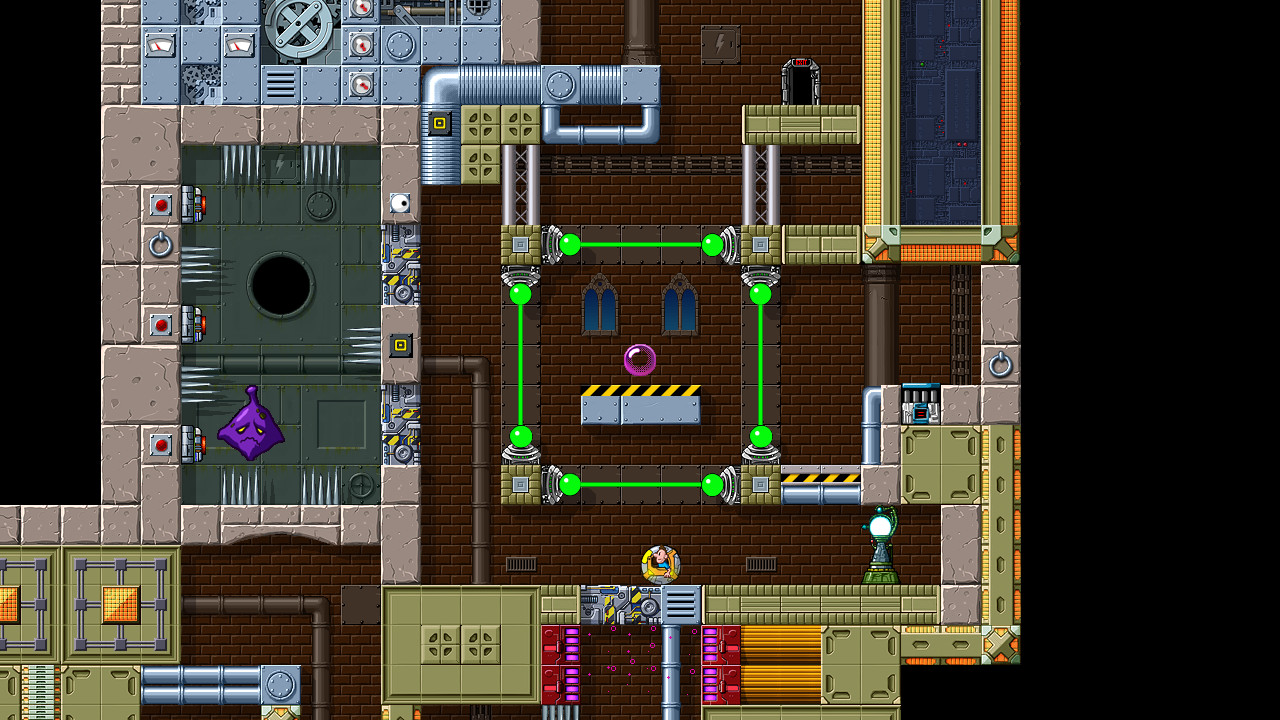 Graphical style is very colorful, reminds me of those old animated series from the 1990s. It might be just my age, but playing this was a big throwback to the golden days of side scrolling platformers.

Many different colors are featured on every level on the walls, platforms and enemies.  Monsters you encounter also follow the same design, they’re straight out of those old games. Strange, funny and out of this world. The visual style is explained by its original release as a mobile game, and it works. The game is interesting to look at and offers few surprises on the monster designs. Soundtrack is pretty upbeat, joyful and energizing pop-style music, enjoyable to listen to while playing.

You control your character with the arrow keys (another golden oldie). There’s also a sticky bubble that you acquire which you can use to push levers, move wooden boxes and investigate the level without going there yourself. There is also an option to use A and D to move, but i personally found arrow keys to be more convenient. You start with your skateboard, but will soon get other means of transport during the game. Core keys stay the same but they bring additional options like, for example, having a magnet that lets you progress along roofs/vertical walls if they happen to be metal. 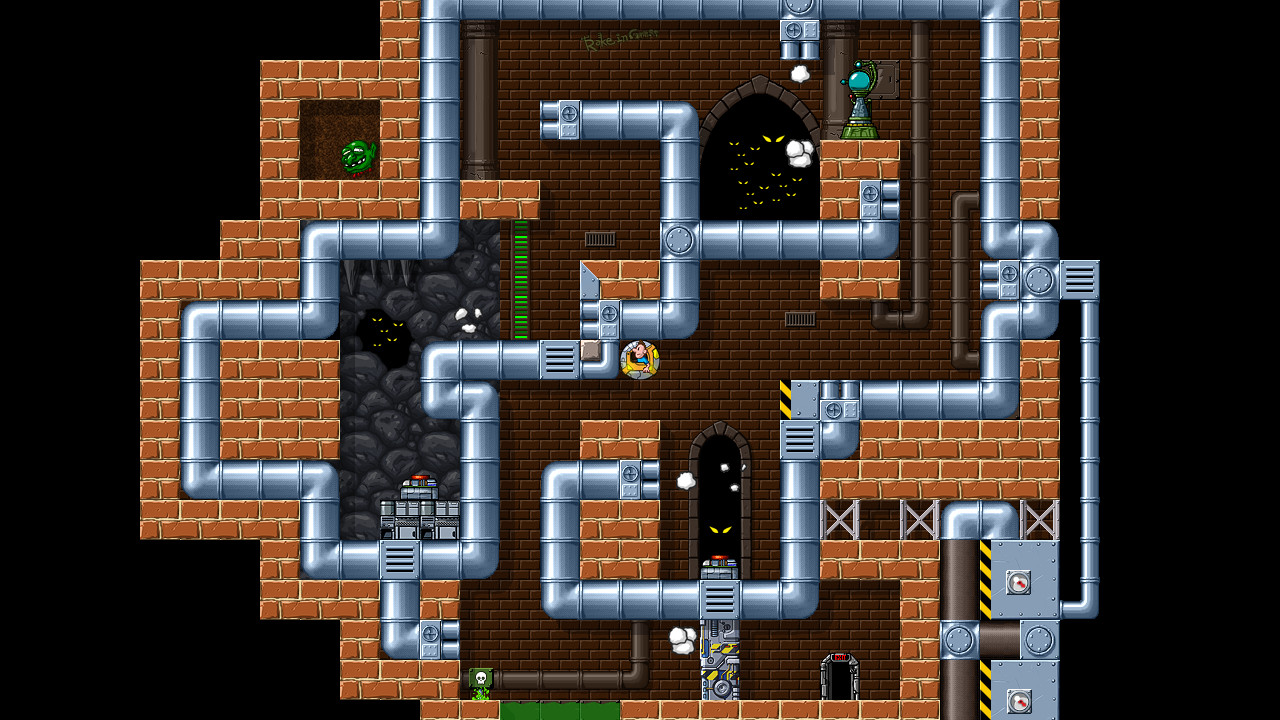 There are some annoyances with controls, for example if you have a spot where you need to go down just one step. Pressing the correct direction might land you on the step or over it. I had many times like those when I, instead of the one lower step, ended in a pool of acid, fell to my death, got pierced by spikes or eaten by a monster.  It’s easily fixed by quickly pressing to the opposite direction when falling, but that brings its own problems as well: if there’s a ledge you can climb on, you will do so by just pressing to its direction while being next to it, so you might be jumping up and down a few times before you get the hang of the timing/sensitivity, and finally make it to that one lower step.
Would have been better to include a button for those climbing/dropping down moments because usually it’s just one square you’re aiming for and it’s easy to miss. I replayed the tutorial levels but didn’t notice a button like that anywhere, and also tried different buttons myself, so I guess we don’t  have anything like that.

There are spawning points scattered here and there in the levels so you don’t have to start them all over again but it still gets tedious after a while if you fail because of controls, especially in the later levels where timing is crucial and you’re moving sometimes pretty fast to get past the obstacles/monsters.

Plot is pretty standard, experienced in three different story arcs, and is advanced mainly on the levels by the main character communicating with the scientist. Those moments are few and far between, so for a gamer who isn’t really keen on following a plot and just wants to play, this game offers just that. I liked following through it even if there weren’t any surprises or twists. It was light and casual. I highly doubt anyone would pick this game up with hopes of a deep plot anyway.

Game is said to have 191 levels and, while this is true, it’s a bit of cheap marketing trick. Two first chapters consist of 14 levels (and 2 bonus levels each that you can unlock by completing every other level in the chapter). They’re tutorial levels. So that’s 28 tutorial levels in total. It’s basically one action per level: there is a switch, press it to open a door, exit opens; this is a box, move it near the ledge to jump on it  and  exit the level.
191 levels of puzzle game sounds like a huge game on paper, but it’s about 20 minutes and you have finished 28 of the promised 191 levels. I personally would prefer to have less levels than having the game look better on a store page and resort to a degree of false advertising. Second chapter is even named “more hints”. Those 28 levels could easily have been compiled to one chapter or  less. 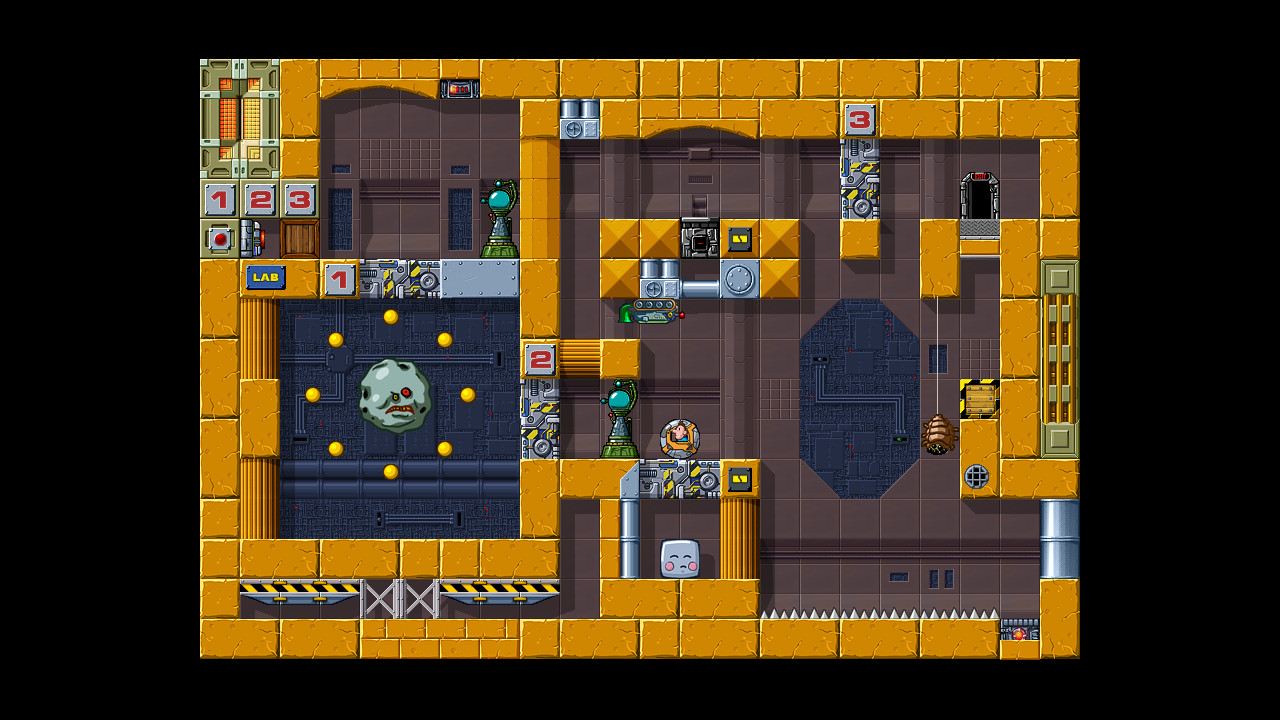 Later levels are more and more about navigating your bubble through tight spots and timing your movements to get past monsters than traditional puzzle solving. This is where the controls make our life a bit harder again. There are moments where a monster goes left and right and you have to climb on a box and drop quickly. You could accidentally press the direction key half a second too long and climb on top of the next box and get eaten. Or when you have the ability to crush boxes, I happened to crush an important one by accident and had to restart the level.

Levels also seem to vary between easy, medium and hard at random. At one point there was a big level, then the next level was a small room that took less than a minute to complete. Didn’t really feature any puzzle at all, just a couple of easy jumps and that’s it. Like the tutorial levels, these also feel like useless fillers. I tried to determine why there was such a room between a few big ones that featured monsters and traps? Why has the professor even built a room like that there? But I didn’t produce any sensible theory about that, except he *cough* developers *couch* just wanted a cheap way to increase the size of his lair.
Luckily, you don’t need to play the levels in order if you get stuck on something, or just don’t like it. You can choose any level (except the bonus levels) from any chapter minus the final episodes of one plot arc. I noticed myself skipping levels here and there when I saw other obstacle courses filled with monsters. Unlocking the finale requires every level completed up to that point, but before that feel free to play in any order you prefer. 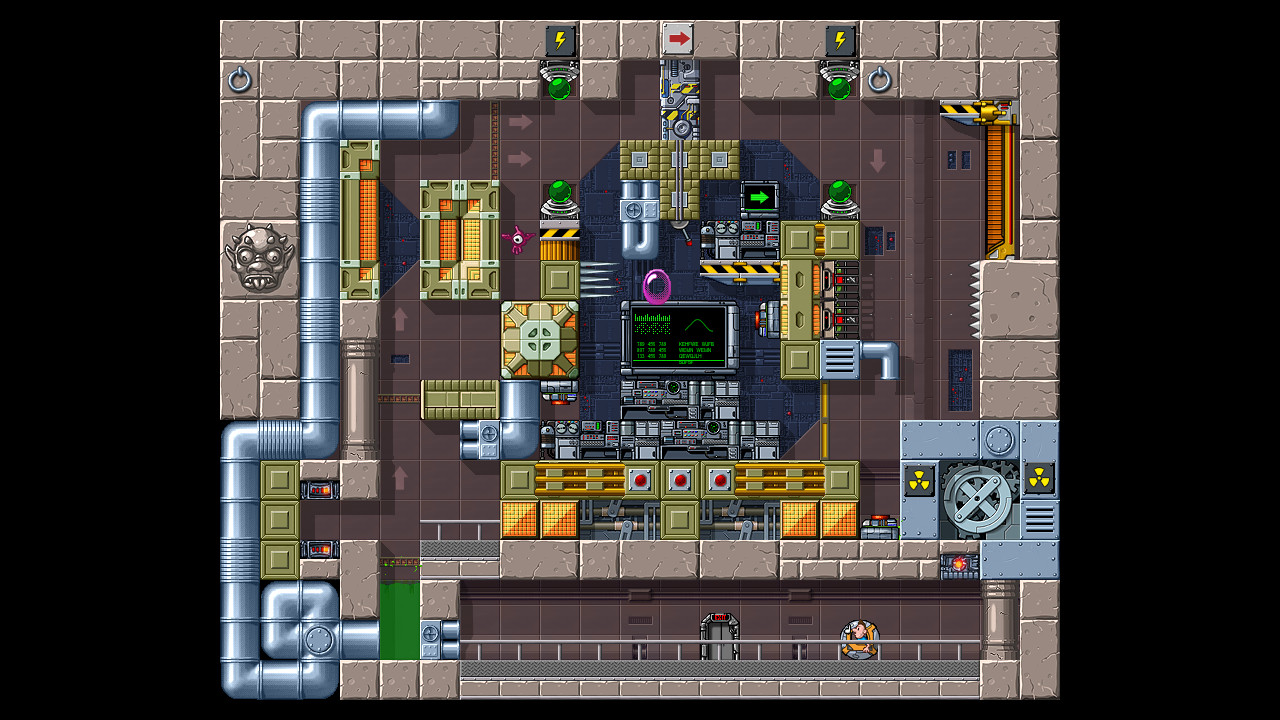 I don’t consider this a puzzle game, at least not for adults looking for a challenge accustomed to puzzle games. Actual puzzles in this game are very few even though it claims to have “brain busting” puzzles on its Steam store page. Even if the levels aren’t big, or require much time to complete, it still gets boring after a while. Most levels are just obstacle courses with absolutely no thinking required. Eventually I gave up and chatted on Facebook while completing the levels on the side.
If you find it on sale, or part of a bundle, this is a good time killer for a while (to play on not-so-powerful laptops on vacation for example), and your kids most likely will have tons of fun with this and appreciate the colorful world and funny monsters. Works without a problem, it’s a good port from the mobile version, but if you want a puzzle platformer/puzzle game in general with a challenge, look elsewhere.