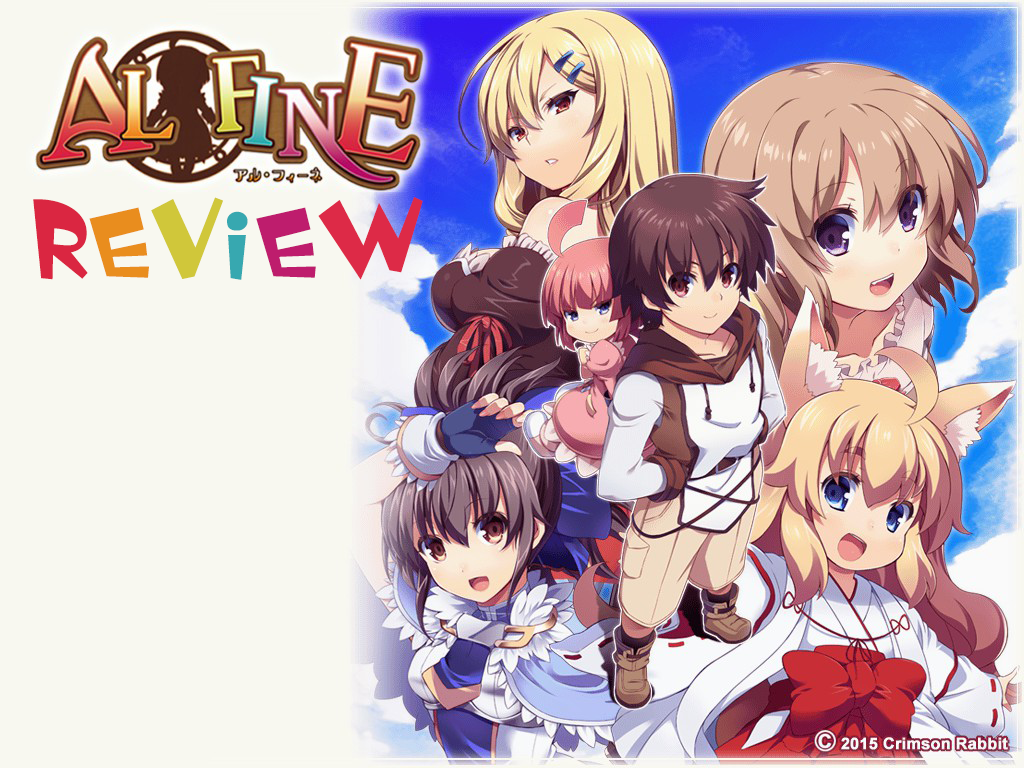 In this world, three races — humans, sprites, and kindred — coexist with their own unique cultures. Some races are on good terms with each other, such as humans and sprites, while others may not get along as well, such as sprites and kindred, but they all live together more or less harmoniously.

Your parents are gone, as is the case of every young Japanese protagonist in a video game, on a journey and the license to their shop is expiring. You simply need to keep the store running in order to keep the license up to date—which is good, because an incident involving a greedy, money-grubbing sprite named Alice has placed you in debt. 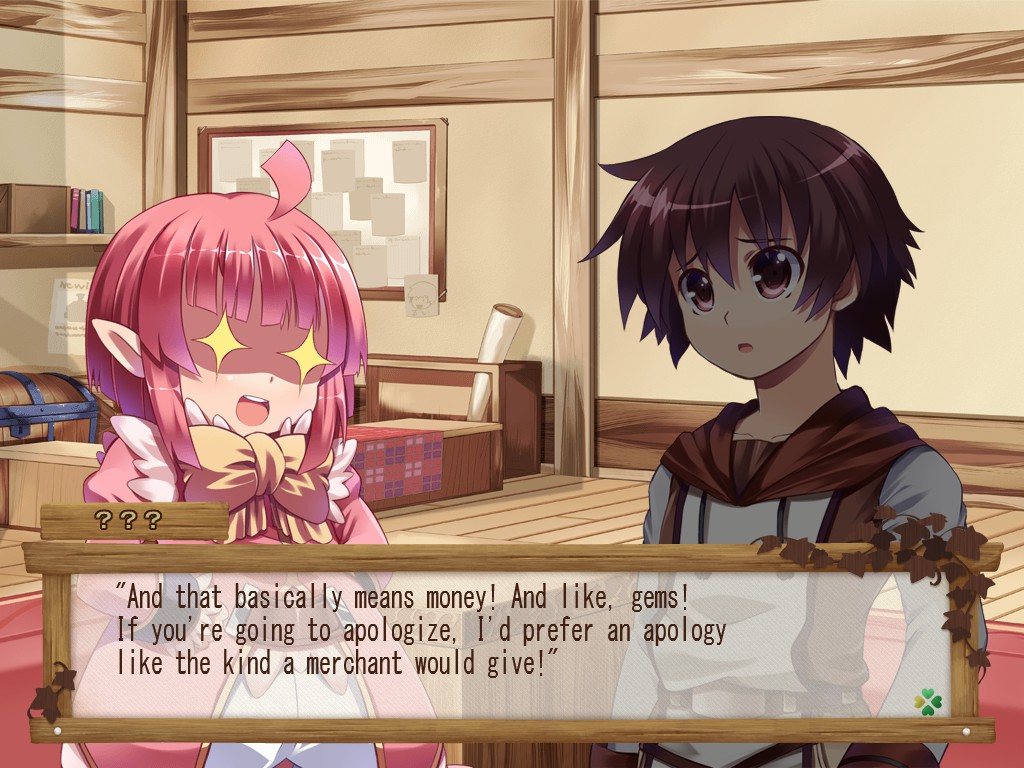 The best way to make money is to own the most renowned store in the land, so get to work managing your time, store inventory, prices and appearance, and a company of lovely adventurers who you’ll meet over the course of your shop keeping and who will brave dungeons in your stead.

Al･Fine plays more like a visual novel with management elements: the majority of the game will be spent reading the interactions between characters.The game is divided into chapters and all of the events revolve around Louis’s experiences as an impromptu shopkeep. 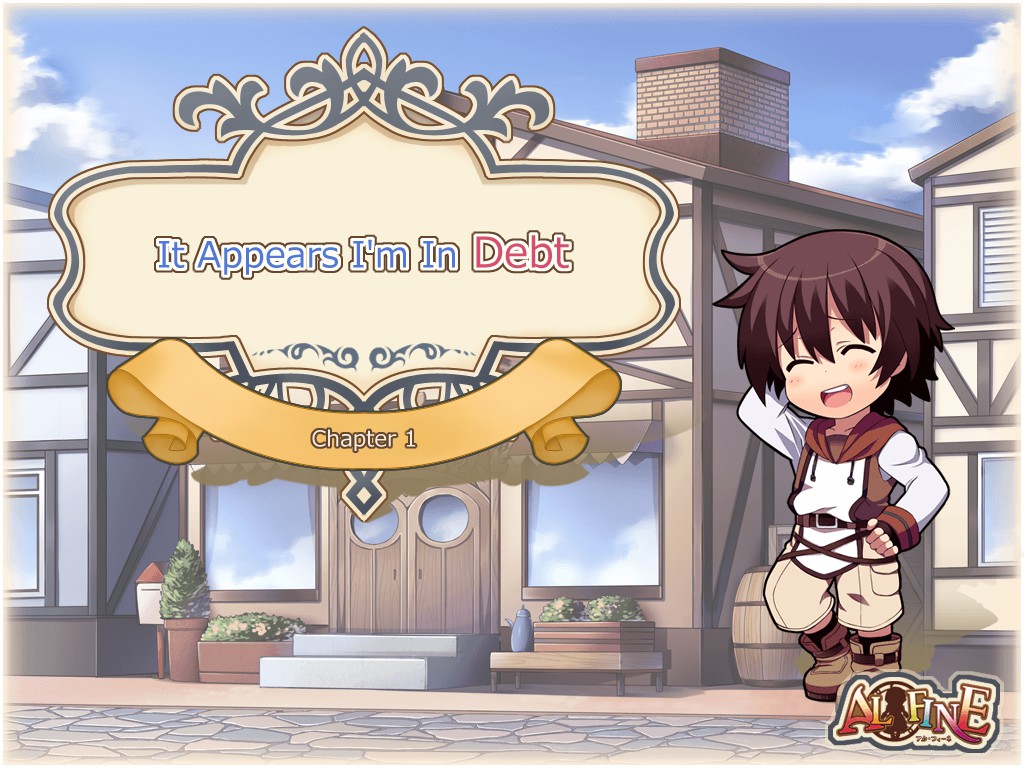 Your actions have no bearing on the way the story unfolds, rather you keep making sales until another shop challenges you to a commerce battle, then you keep selling until you beat them (because the story won’t progress otherwise), which will trigger the next series of events until, eventually, the next rival store challenges you. And so on until the end of the game.

The management aspects of the game aren’t very involved—hence the “casual” tag. The game map consists of seven nodes that you can visit so long as they’re open. Mousing over a location will tell you when its hours of business are (namely, morning, day, and night). Where you go determines your possible interactions: 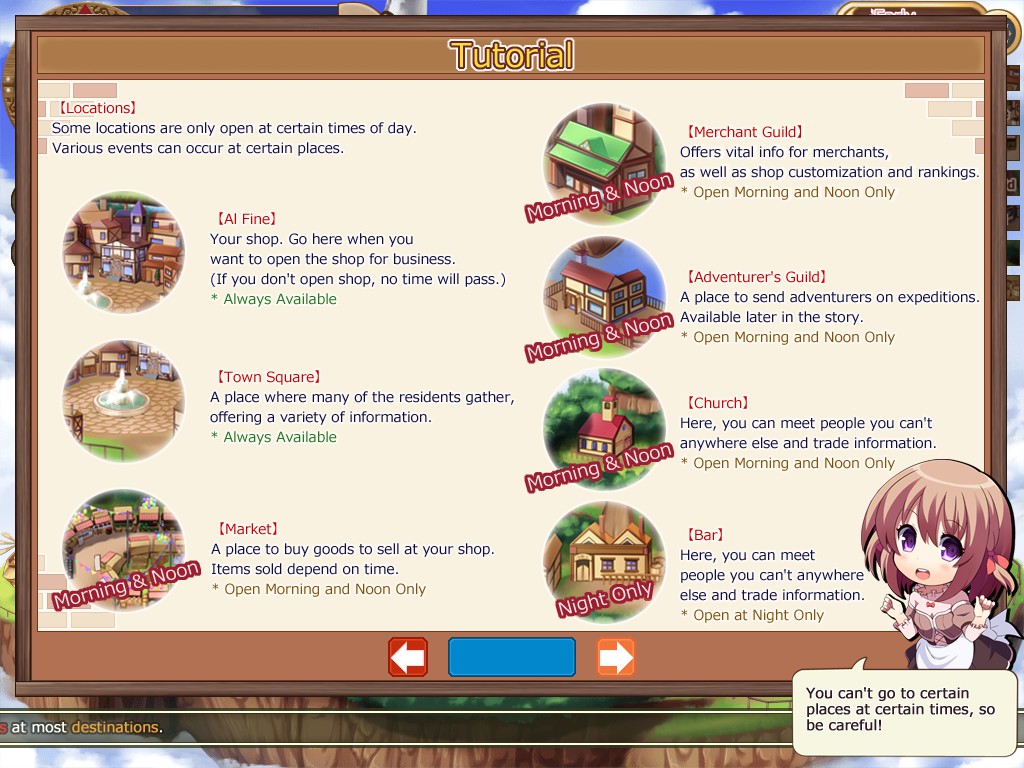 At the Bar, Town Square, and Church you can speak with others and gather information about other stores and the people who run them.

At the Adventurer’s Guild you can send your adventurers into dungeons so that they can bring back goods for you. Adventurers level up when you send them out, which will raise their rate of success and allow them to tackle more difficult dungeons.

Every action passes time. The day is split into three parts—morning, day, and night—and each action consumes one segment.

The weather changes on a day-to-day basis and will influence how many customers visit your store and/or what time of day they’ll pop in. Some days may be better suited to gathering information in the Town Square and Bar rather than trying to make sales. 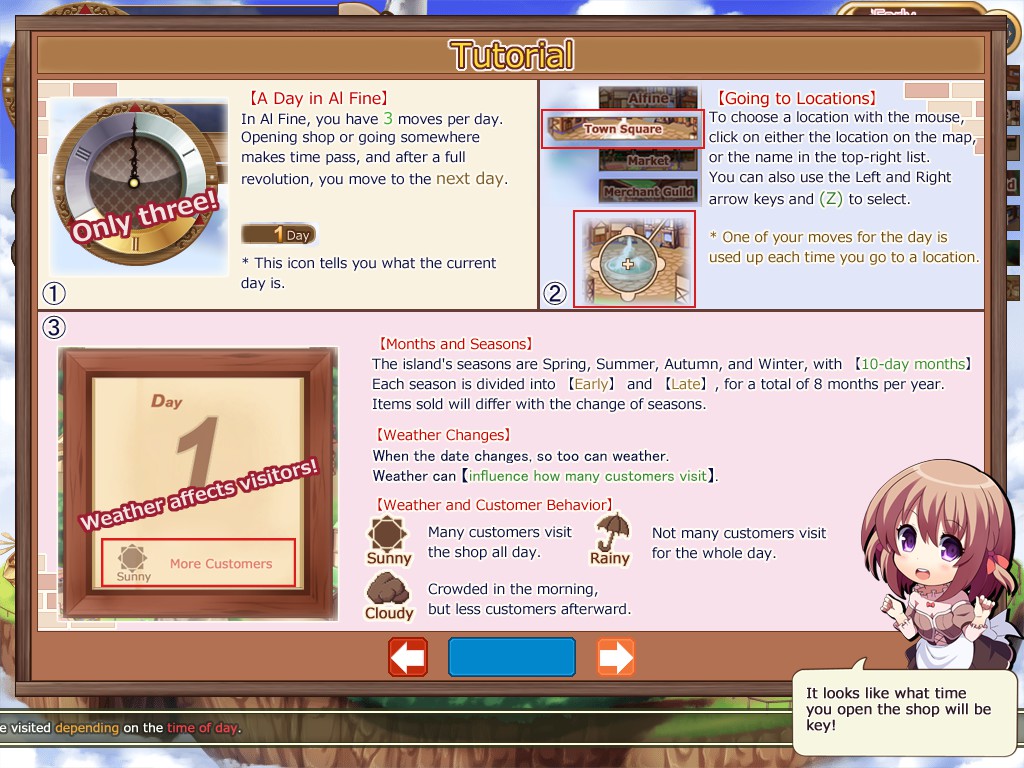 When you do open Al･Fine (the shop, not the game), you can first walk around and select what you want to see and for how much. Each item goes on a shelf, which has a weight limit that can be upgraded at the Merchant Guild. Then, Louis sits behind the counter and rings out customers if they deign to buy your wares. Meanwhile, Alice will restock items when you click the shops that are low on stock—assuming you have extras in your reserves. 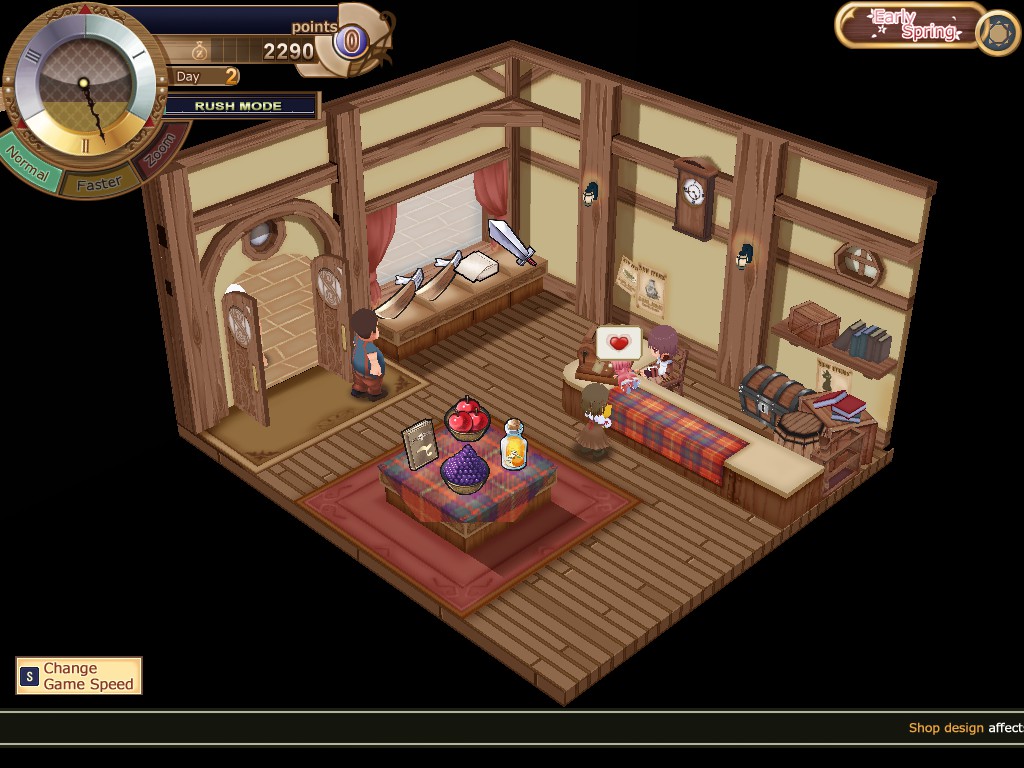 As you make sales, the “Rush Mode” meter will fill up. Once it’s full, Alice will get a small boost in speed for a short period of time. It’s not a particularly useful aspect. 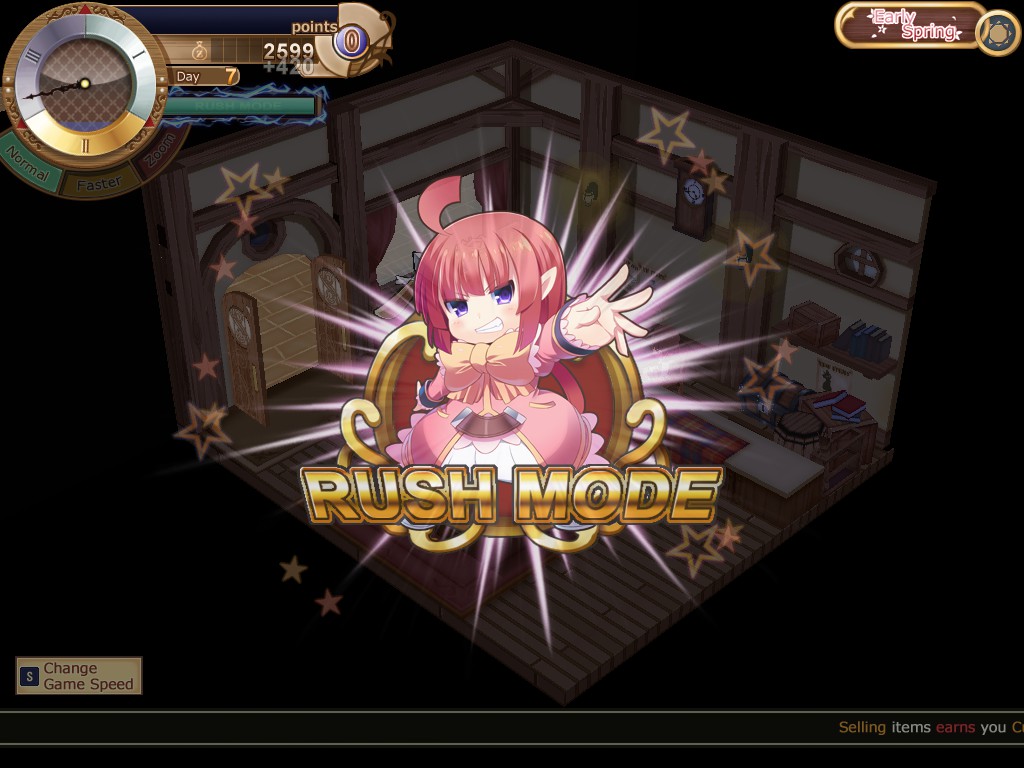 Opening shop consumes one segment of your time, meaning you can open up shop 1-3 times a day.

You’ll get new stock every season and also when you spend enough points, which are earned from running Al･Fine. Points can also be used to buy new counters, curtains, wallpaper, flooring—the shop’s appearance, basically—and the like. 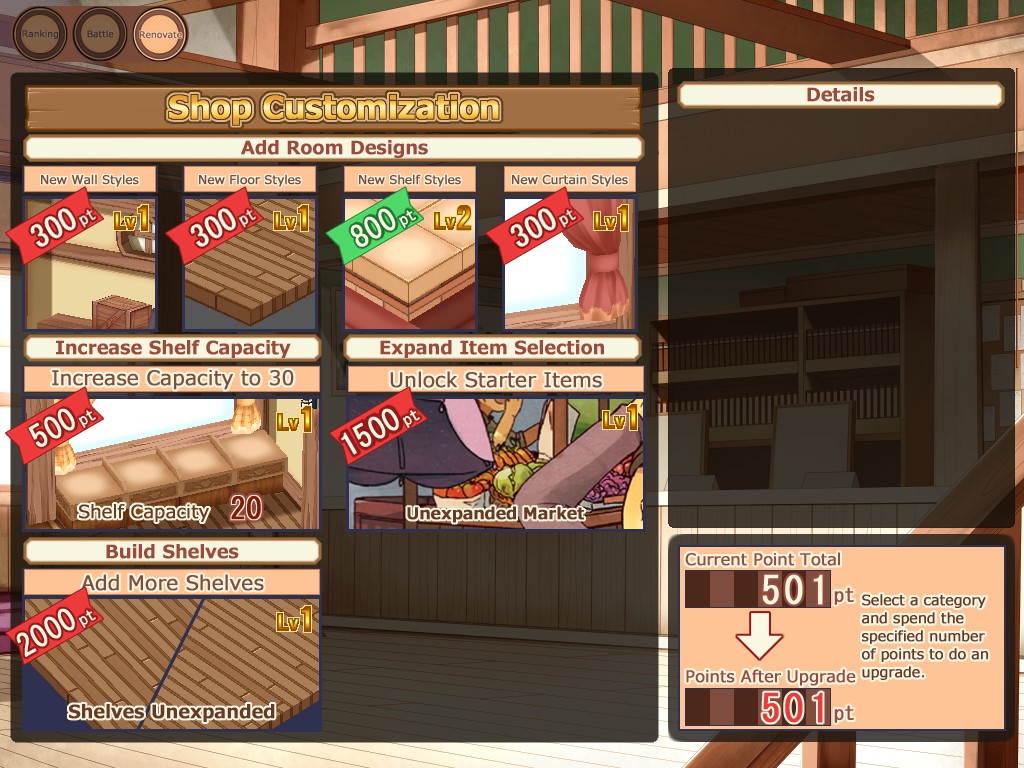 Upgrading will increase the cost of your Merchant Guild Fees, which is collected every 10 days. If you fail to pay it, it’s game over, so watch your funds! 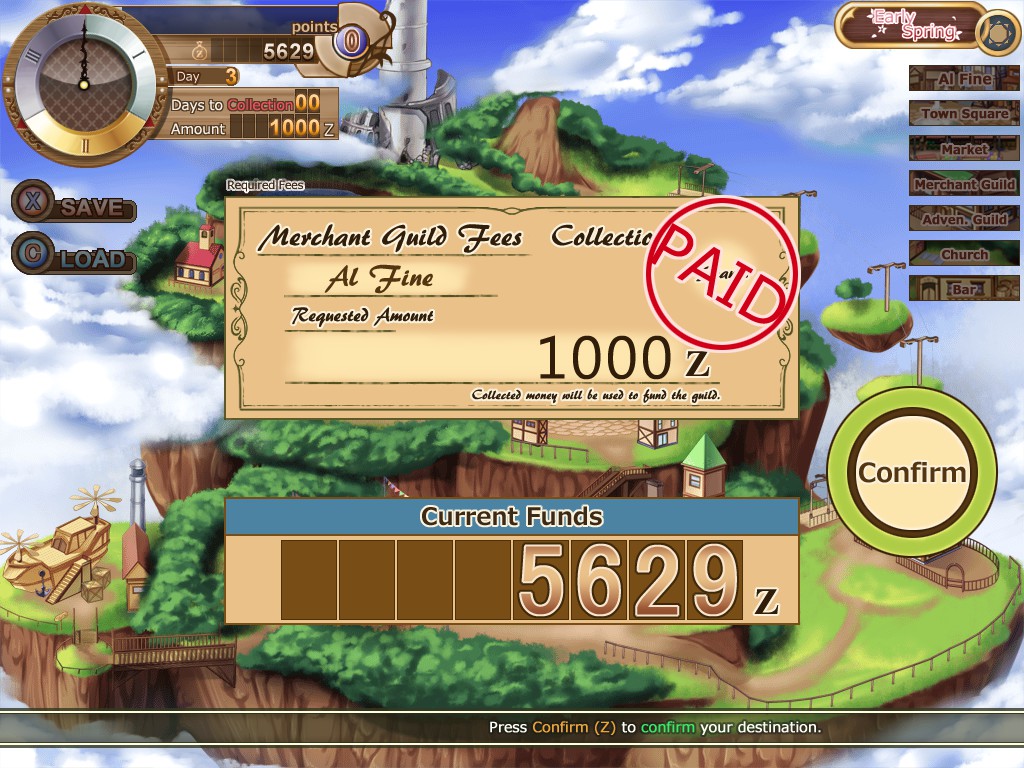 Finally, there are commerce battles against your rival store that occur when enough in-game time has passed. You are given a period of time during which you have to make more z than your rival and you must conquer the rival store in order to continue.

There are plenty of waifus as well, so there’s that. 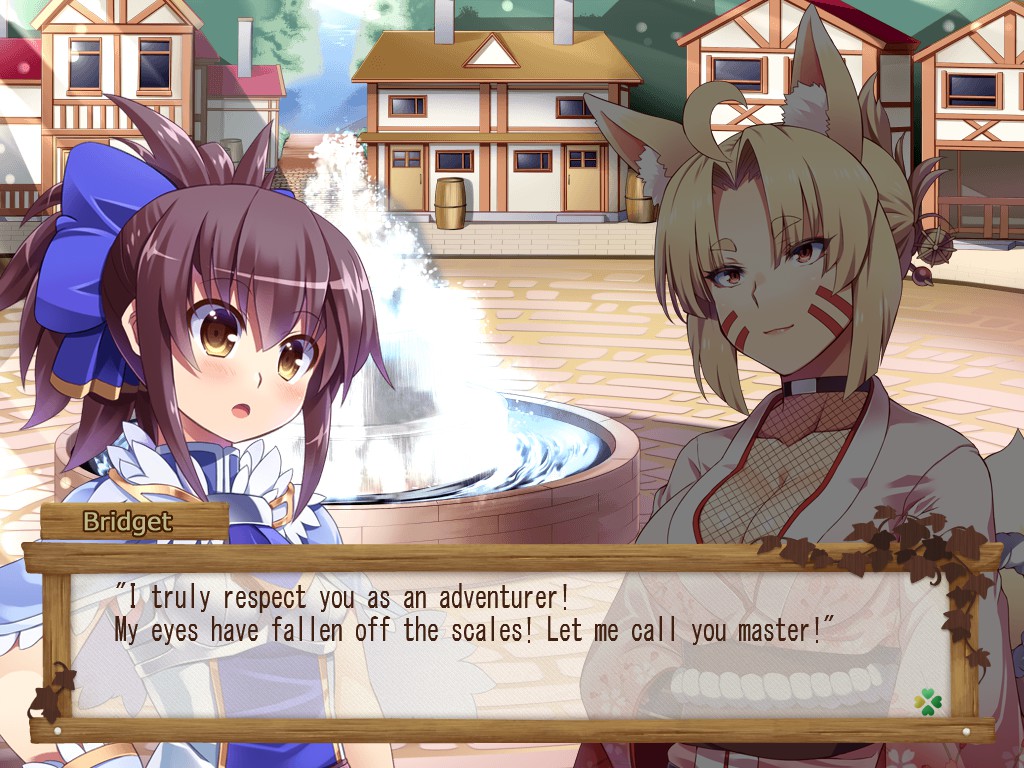 The story is linear, so subsequent playthroughs won’t yield different endings. Depending on how good a salesperson you are, completing the game could take upwards of 4 hours. 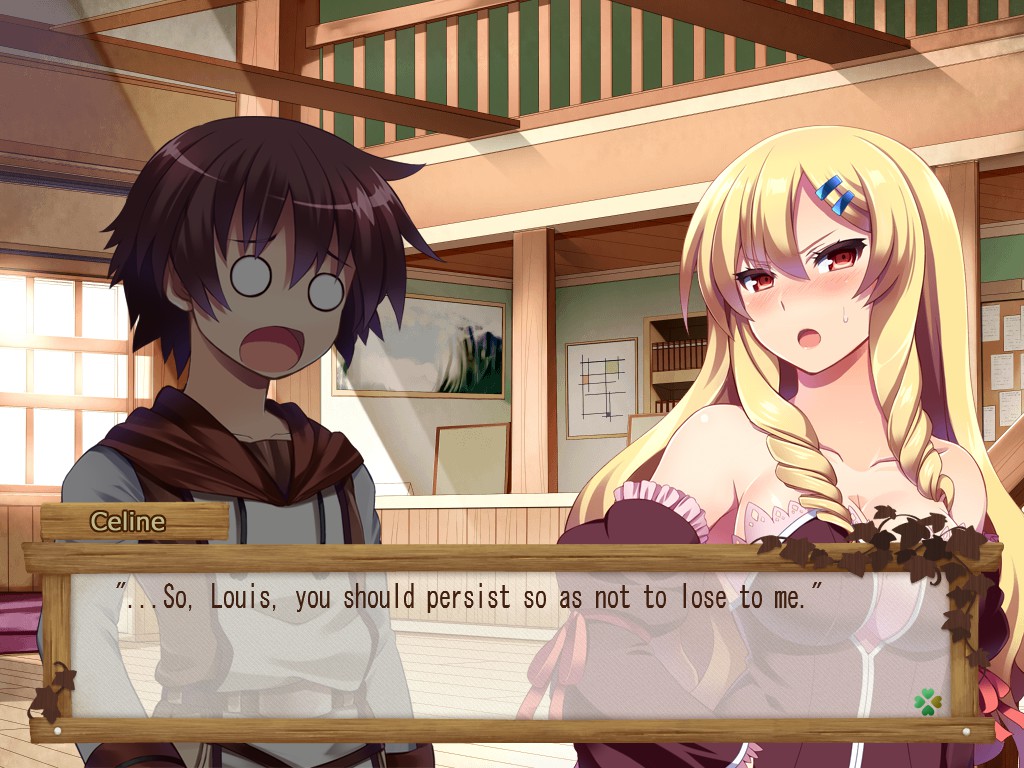 Al･Fine is a fun, simple way to run a store without all the stress of actually managing a business. The story is funny, albeit linear, and possesses all of the anime stereotypes (shy nerd girl; buxom moe rival; hyperactive, pure-hearted heroine; scrawny young man who is helpless on his own yet somehow always gets the girl) we’ve come to know and love. If you’re in it for the story, this game is for you.

If you’re looking for a complex and in-depth management sim, steer clear.

Polish (how well the idea is delivered)–8/10

RATING: 70/100–A solid title for fans of the casual simulation genre.