It’s hard to put my words regarding this title because of the high artistic nature of this game. It can be said to a lot of point and click games. Karma is less of a game, and more of an expereince, a surreal, psychedelic experience, certainly a unique and unforgettable one IF you can apprecaite it. Yup, a big “if” right there. Point and click is a niche genre, always has been, and even more so today. It’s a genre of hit and miss, especially for a game that takes a more artistic path like Karma. So, the big question is, is it the point and click game that right up your alley? 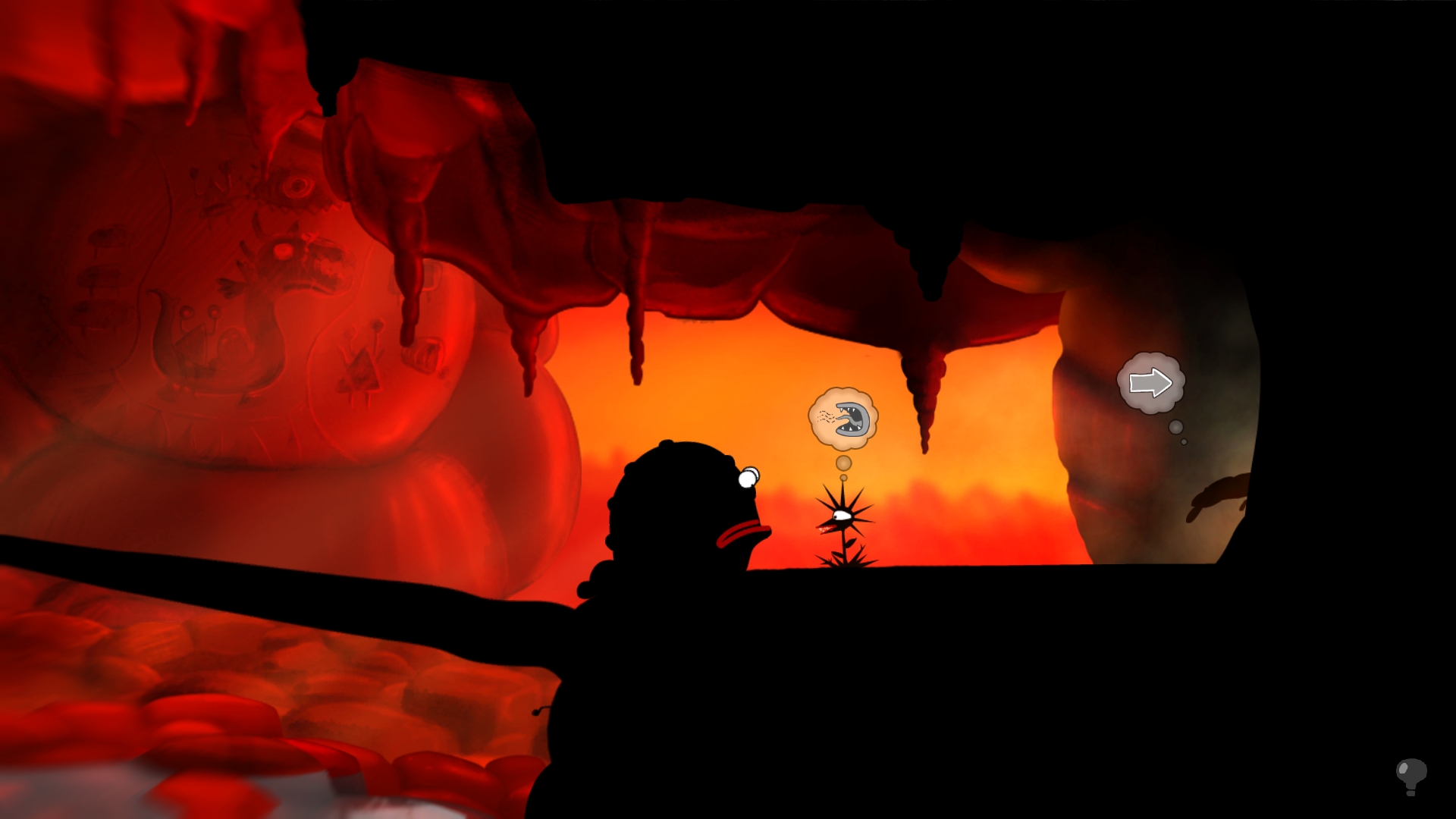 First, let’s talk about the strongest aspect of Karma, and that is it’s art and concept. And it is gorgeous, absolutely gorgeous. It’s vibrant and bold, every splash of colors are implemented with a great deal of thought, and how can I say this? It’s hard to do such thing, creating a psychedelic-esque universe with bright, vibramt, and even contrasting colors without giving you an eyesore and headache after 5 minutes into a game. In Karma, it just works, it works perfectly.

From the reddish/orange-ish that depict the strange-ness of the area, where the players first introduced to the game make the rather “normal” tribal cave looks 5x more alien than it is, then moving on to the purple shaded area, that echoes joy and happiness, to the ice-cold and isolated area, and the green “industrial” area. It’s something to be expected in a point and click games, giving each area a distinct feel and look, something that has been a standard of a good point and cliick games, and that’s playing with color to evoke a certain tone, mood, and atmosphere. Karma take a bold move by using a vibrant and strong colors, while most use a more subtle approach.

Karma’s characters itself are some… things.. that come straight out of your deepest nightmare yet somehow managed to be so cute and adobrale, it’s almost like something that Tim Burton would create, so strange, unconventional, but “attractive” at the same time. As bizzare as the character looks, it has a strong aura of innocence, which fits perfectly with the overall art. 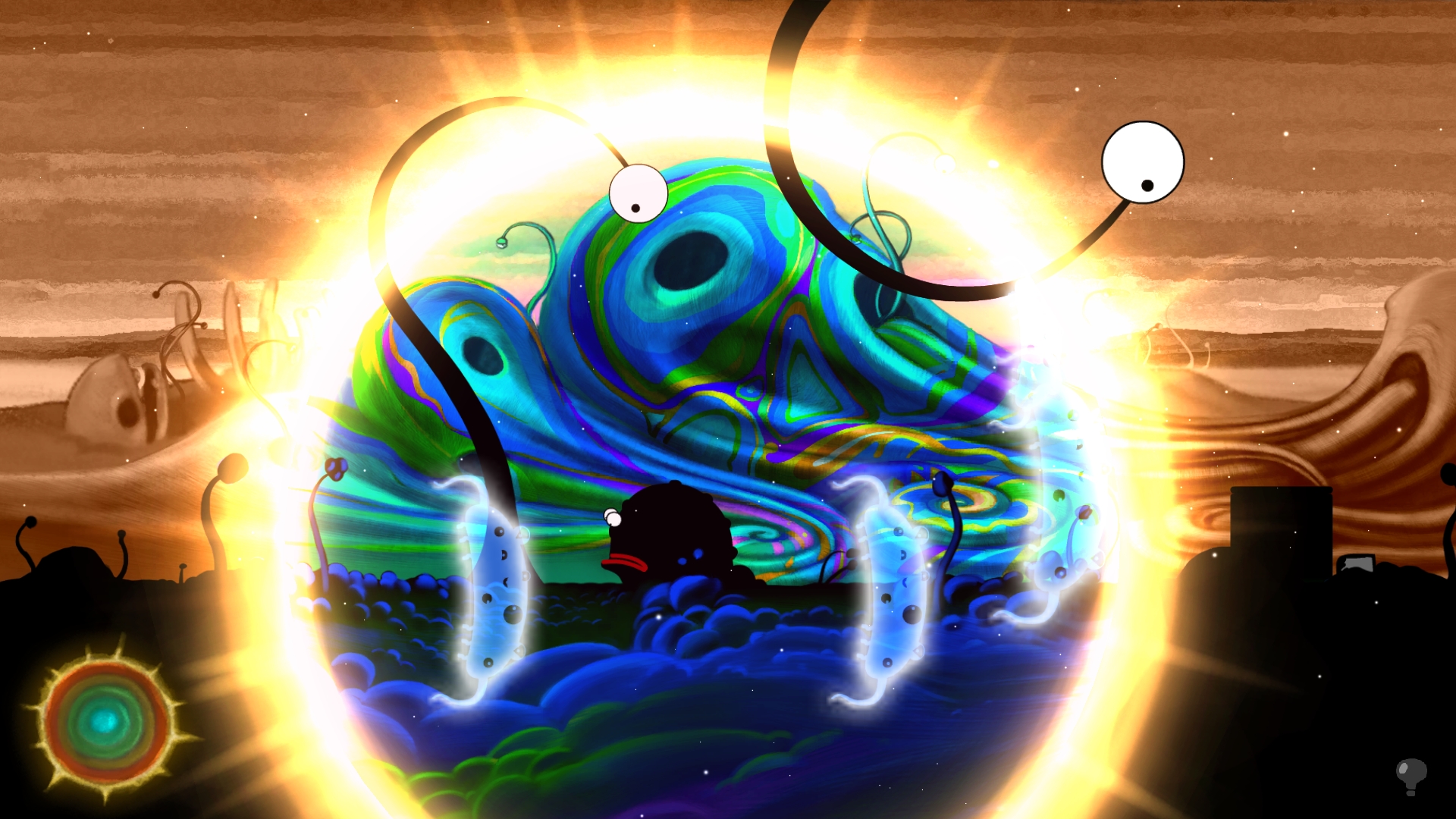 The story itself is pretty simple, you are a spirit whose beloved pink spirit is abducted by an evli spirit, and to defeat the evil spirit, he must reincarnate to a dragon, but instead he turned into a worm named Pip.

Karma’s dialogue is told by an alien, incomprehensible language, and thus heavily relies on various speech bubbles that shows various icons and animations, and that won’t work without a fluid, expressive animation, and by presenting the right visual cues. And that’s what Karma excel. These elements is what carry Karma’s gameplay and storytelling. The supppsedly kind of cliched, boring story is greatly elevated by it’s astounding viusal narrative. Cute things expressing themselves with cute speech bubbles.

The gameplay itself is more simple than your typical point and click, it feels like most of the puzzles are there for the sake of making the game feels more..gamey. While the puzzle itself falls into typical point and click tropes, they are a bunch of puzzles that ranges from pretty straightforward to absolutely absurd, But the fact that Karma is entirely on 2D, made the puzzles overall easier, since you have far less dimensions to click around and the world of Karma is in a tight and rather confined space. Sometimes, I just click around the various interactive objects, hoping something funny will happen, and it works at times! 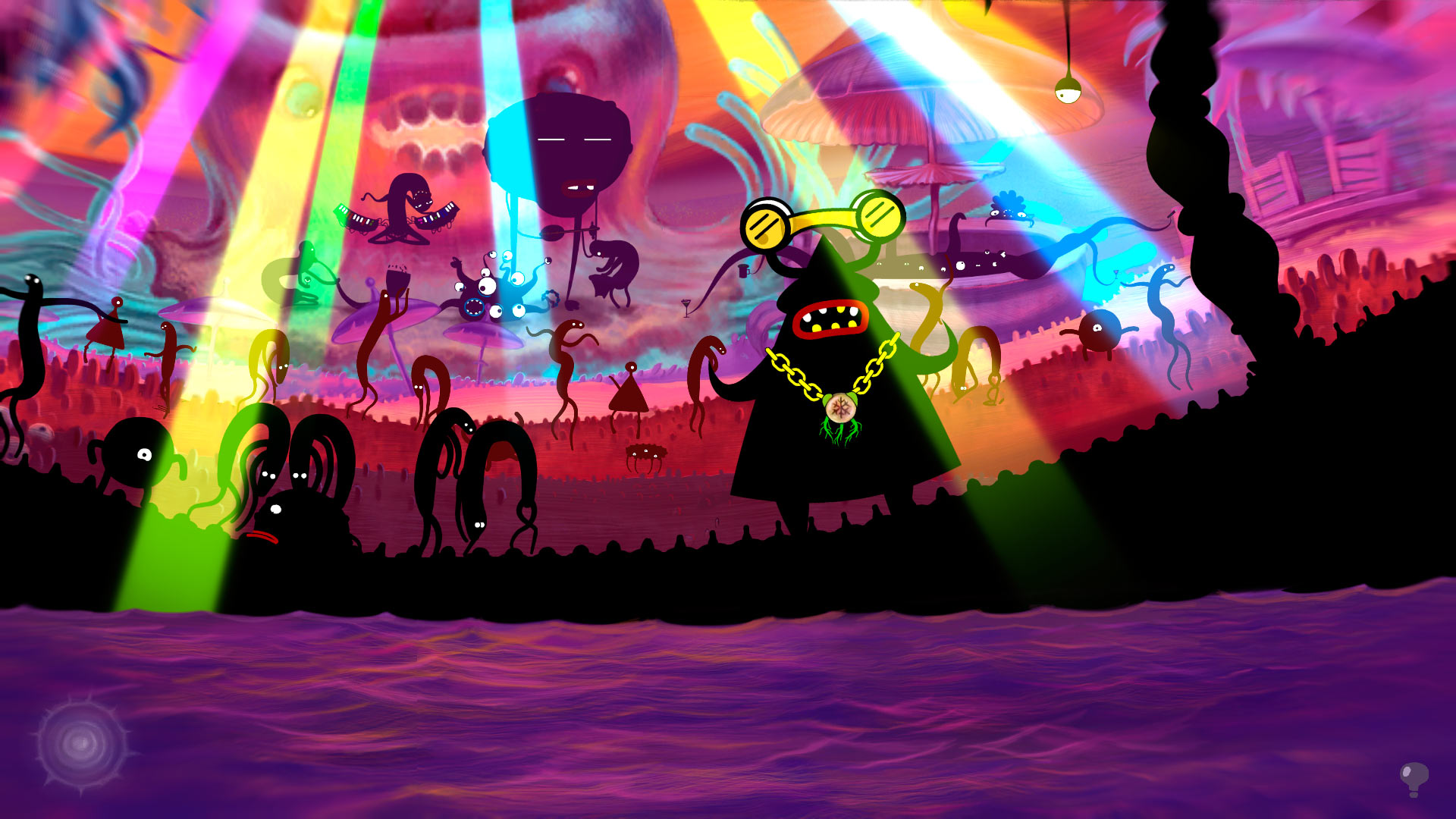 As the name suggest, the gameplay mechanic that differentiate it from another point and click games is the karma system. In some occassions, you are given two options to deal with a problem, that’s a good and evil deed. You’ll grow spikes if you do evil deed, and that affect the story and how other creatures treats you. That gives the game an additional replay value. The other one is astral sight, where, in a push of a button, everything around you become more surreal with all these funky colors and you’ll be able to see whatever it is on the astral world, and interact with it. Unfortunately, it’s under utilized.

As for the sound, I can’t say much. The soundtrack, as the rest of the game is just strange but still really great to listen to, and the tribal feel to it fits welll. The characters’ voices are funny, and the sound effects are well made. Just like the other aspects of the game, it fits perfectly well and adds even more to the whole strange yet charming atmosphere. 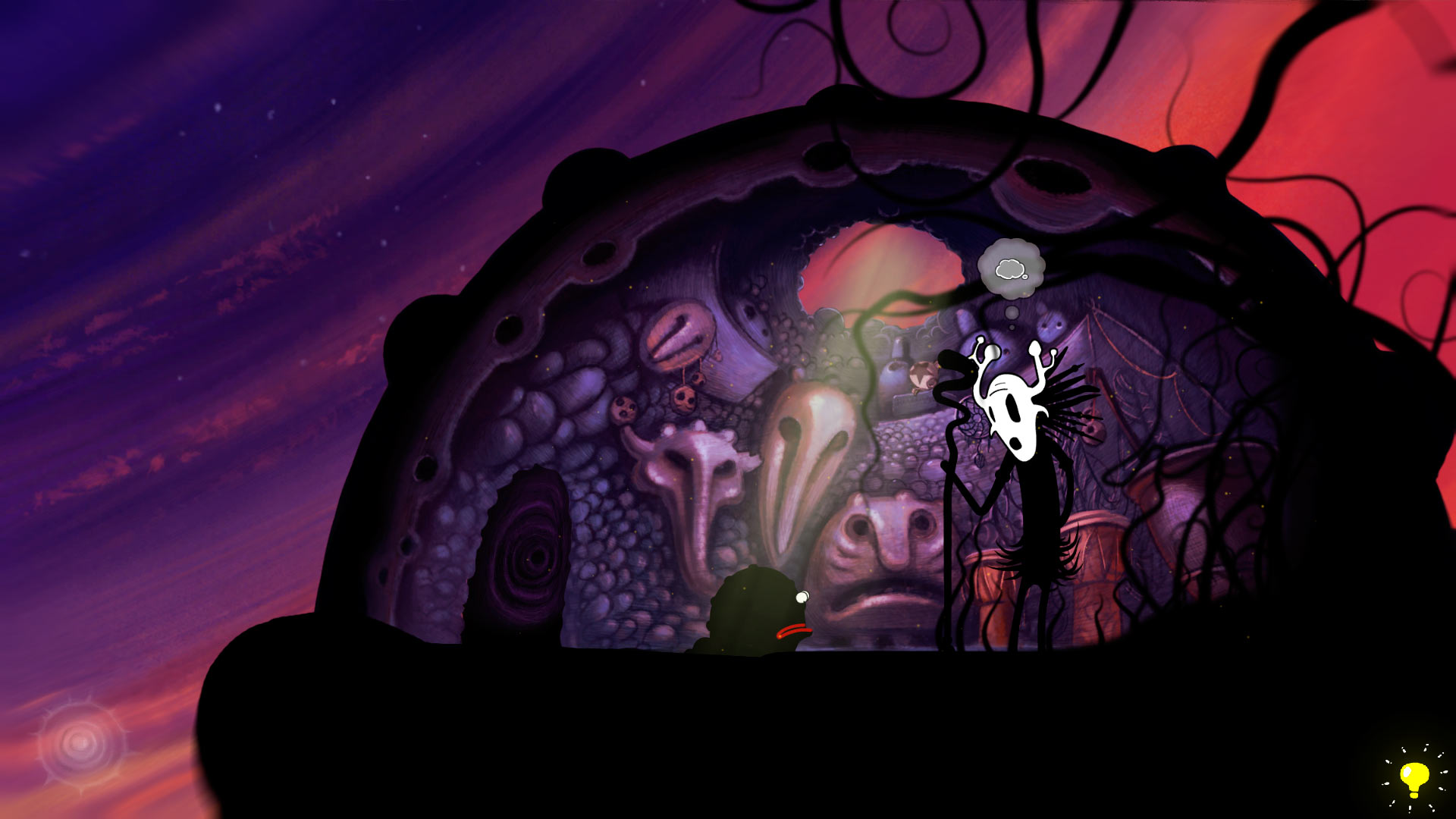 Karma inhabit the recipe that makes a great point and click games..well.. great, and also carry the same mistakes as the ones it borrows from. First, the more abstract puzzles, my biggest gripe with the vast majority of point and click, it feels like it’s just a common rule for these type of games to include the kind of puzzle that made me want to tear my hair off, but thanks to the small 2D space, Karma managed to significantly lessen the frustration, to the point where it’s actually quite easy, is it bad? Well, to an extent, not really, Karma, by itself is aimed to be a more casual point and click and it did it.

Second, is the story and character. As I said before, the story itself won’t be that noteworthy if it’s not because of the setting, art, concept, and how they convey it. And while, it ended in a good note, compared to other episodic point and click, they kinda failed to convince me that something grander is going on, though they do piqued my interest for the next installment. Finally, the weakest part is the side characters, due to the length of this game, to the design choices, it’s hard to know, or pinpoint the characters, who they are,what their role is, their characterization, and so on. They feel like a bunch of creatures that Pip happened to pass by.And I hope this will be adressed in the next game. 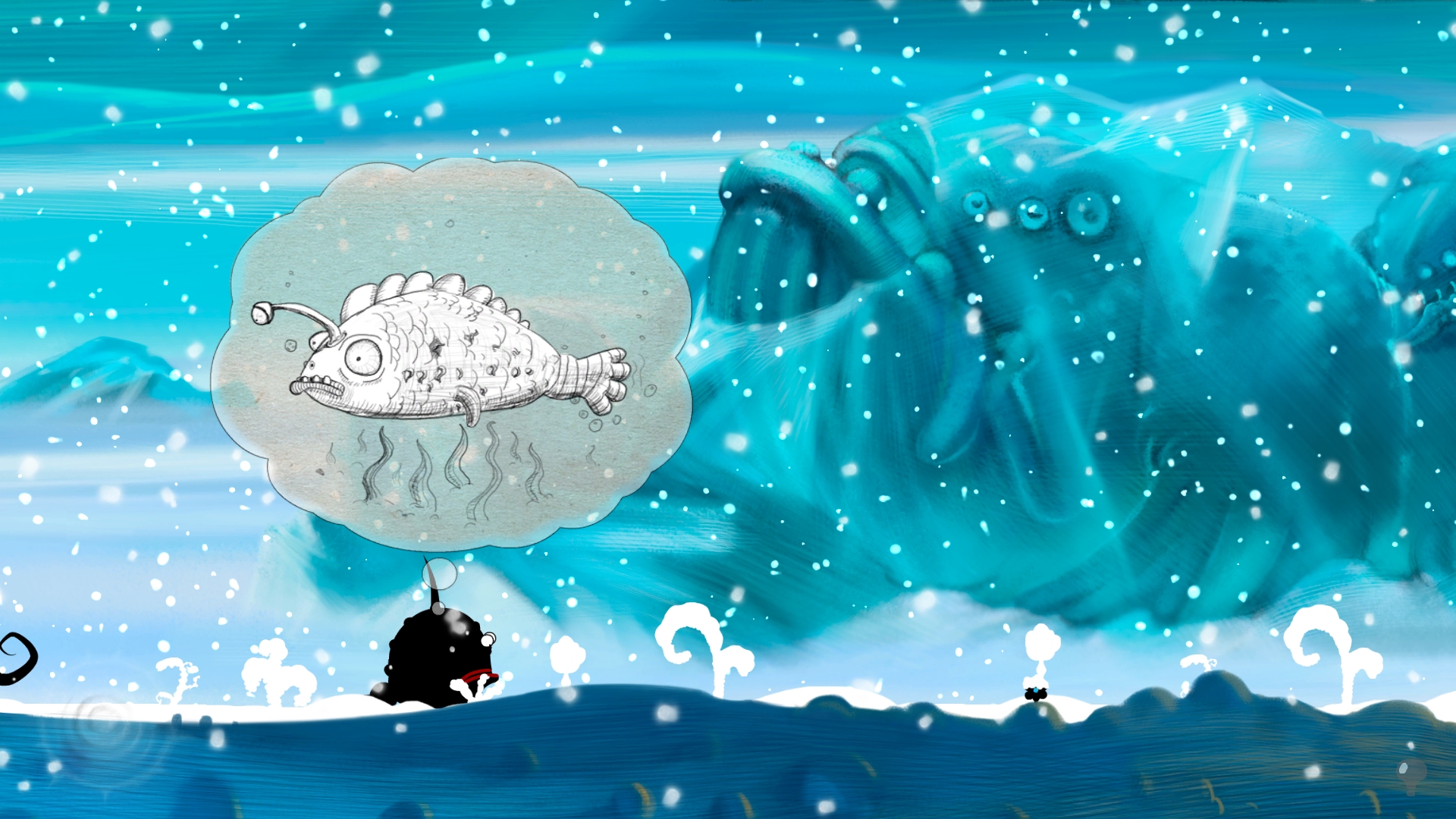 Karma, Incarnation is not a game for everyone, it’s a niche game within a niche genre. It’s a beautiful, bizzare, and unforgettable experience if you can appreciate the game as what it is. It’s biggest strength is certainly the bold and vibrant visual, unique character design, and it’s smooth flow both in story and animation. For a point and click game, its puzzles’ difficulty is on the lower spectrum, mostly for the better.And it succeed on making a compelling story out of an otherwise generic plot. All in all, Karma, Incarnation is a game that is more interested in the “Experience” aspect on “Gaming experience”, it’s gorgeous,calming, and funny, and for the asking price, it’s totally worth it.