Dragon Knight is a 2D side-scrolling fighter reminiscent of titles such as the original Golden Axe and Dragon’s Crown. All of the staples are here: healing and attack items to pick up, multiple areas that are blocked until all enemies are killed and multiple weapons (three as of this date) that have their own single combo and special attack. Unfortunately, the attack system feels a bit stiff and some annoying problems are visible. This isn’t SakuraGame’s first game, however, and the Early Access platform gives them a great opportunity to make some changes. The current build is relatively slim in terms of area length, but it does provide the appropriate setting needed to explain the plot.

According to a legend, a dragon will appear from the cracks between Heaven and Hell, bringing catastrophe in its’ wake. Humanity decided to prepare for this tragedy by establishing the Dragon Knights, a group of highly skilled hunters destined to roam the lands in search of this dragon and its’ kin. The player takes the role of a nameless heroine during a final trial organized by the 13th Dragon Knight Team. The goal is to vanquish the old dragon at the end of the course, vanquishing monsters and collecting new gear as the player pushes forward. The old dragon’s death guarantees membership into the Dragon Knights and potentially raises the curtain to the final battle against the fabled dragon that will usher forth disaster. 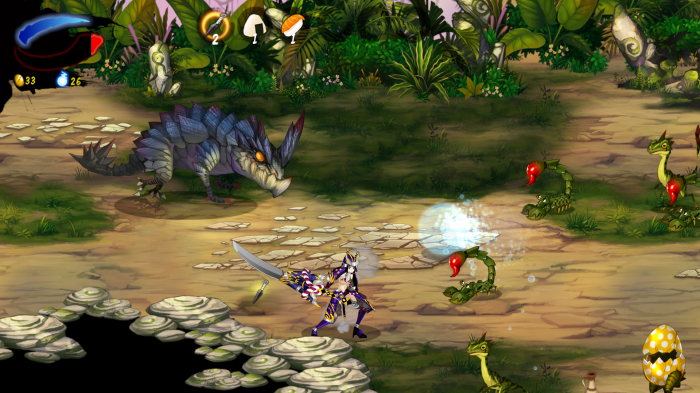 The game is extremely colorful, ranging from the weapon and clothing patterns to the environment’s lush foliage and rock formations. While the outfits have beautiful designs and weapon skills produce some neat particle effects, the character animations for the main heroine feel awkward due to the rag doll appearance of certain movements. Enemy attack animations are great overall and their standard appearances are just as vibrant as the NPCs posing in certain areas. The score delivers on most fronts, but is very quiet in relation to the sound effects. It is a good set of tracks that unfortunately get drown out by weapon strikes and the heroine’s battle cries.

Each round begins with a randomized weapon and suit of armor that sport their own distinct stats and skills. The player then ventures into the wilds to kill monsters, collect coins and dragon souls, destroy breakable terrain for items and claim the chest that appearances once all the monsters are killed. Similar to other side-scrolling brawlers, attacking is dependent on the hit box of the weapon and the y-axis location. Enemies can attack the player even if you can’t hit them depending on the angle, which makes the dash (double tap A or D) ability a crucial tool to avoid frustrating situations. If the enemy hits enough times, the armor’s stats will degrade and the heroine’s breasts will be exposed (which is the only source of nudity I have discovered in the game so far). Replacing the broken armor will repair the stat degradation, which can either be bought by NPCs or looted from the chests in each zone. 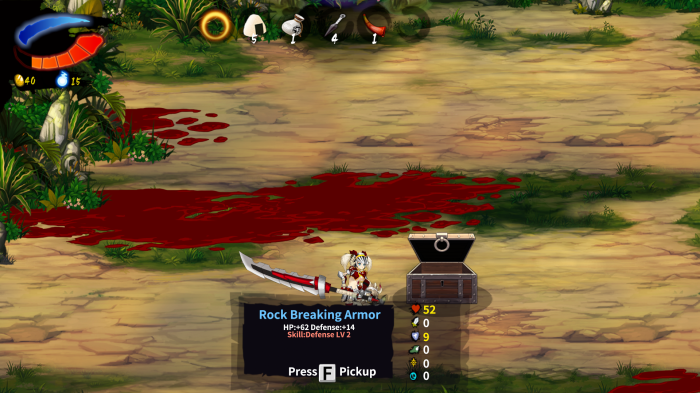 Aside from the hack and slash component, there are also some rogue-lite elements in the form of character enhancement using dragon souls collected from fallen enemies. Upon dying, the player is brought to the dragon screen to place the souls into a branching set of attributes that range from increased stats, skill attack power, the amount of health restored by items and the likelihood of more money dropping from enemies. Every enhancement is blocked until the previous one is bought and each trait has multiple tiers with increasing cost. Some of the increases are very minimal, but others such as health and coin drop rate go a long way to making the gauntlet less nerve ranking. 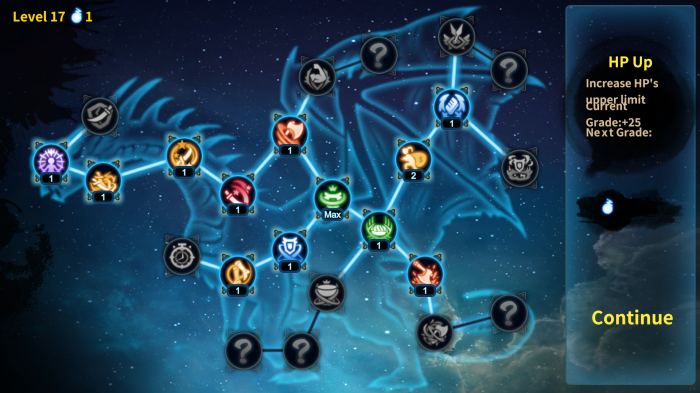 Technical issues are plentiful and span from enemies getting stuck in one spot to enemies venturing outside the border of the map. Weapons have a tendency to not animate during attacks and there is even a chance to lose your weapon completely when switching out for a new one. Key bidding seems to reset to default whenever I turn off the game and there are times the keys will not allow certain inputs. It is also not advisable to attempt changes to the settings during game play due to a serious issue with the settings window remaining after accepting the changes, leading to a situation where the player is unable to move their character or navigate the menu. It has lead to plenty of forced shutdowns to escape the conundrum and reattempt the changes in the main menu.

As stated by a NPC in the starting area, the game is estimated to take six months for completion with an update expected every two weeks. The game currently features a fraction of weapons and armor with many of them utilizing repeat spells. The forest area is the only playable area at the moment with the entrance to the snow region marking the end of the build. Incorporate the plethora of technical issues and it would make the $4 price tag seem a little steep. Should you decide to take the plunge, know it is still a decent hack and slash that offers a good challenge any side-scrolling brawler fan would appreciate. 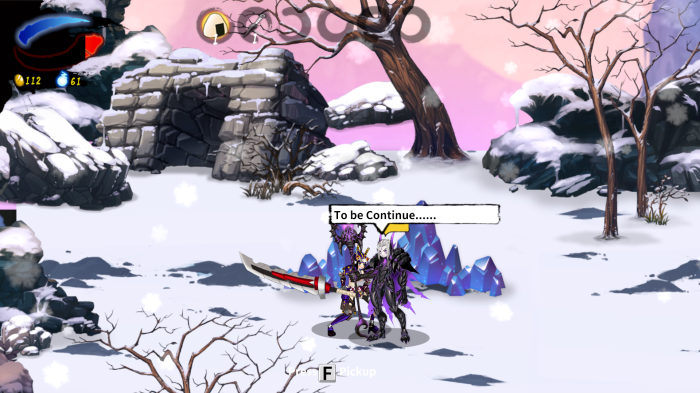