2016 has been a very lopsided year for games in the indie sector and even major developers have been feeling the pinch. Remasters, spiritual successors and original products have flooded the markets with varying degrees of success. Massive budgets have been put into some of these products and fallen flat on their ambitions, adding further fodder to weigh down titles that could potentially rise above the production costs. Super Jagua, developed by cbritez, was released under the radar and managed to catch my eye purely by chance. For the price of a crunchy taco, I was served a polished, difficult platformer smothered in nostalgic fun. It is a tribute piece done right and deserves a closer look. 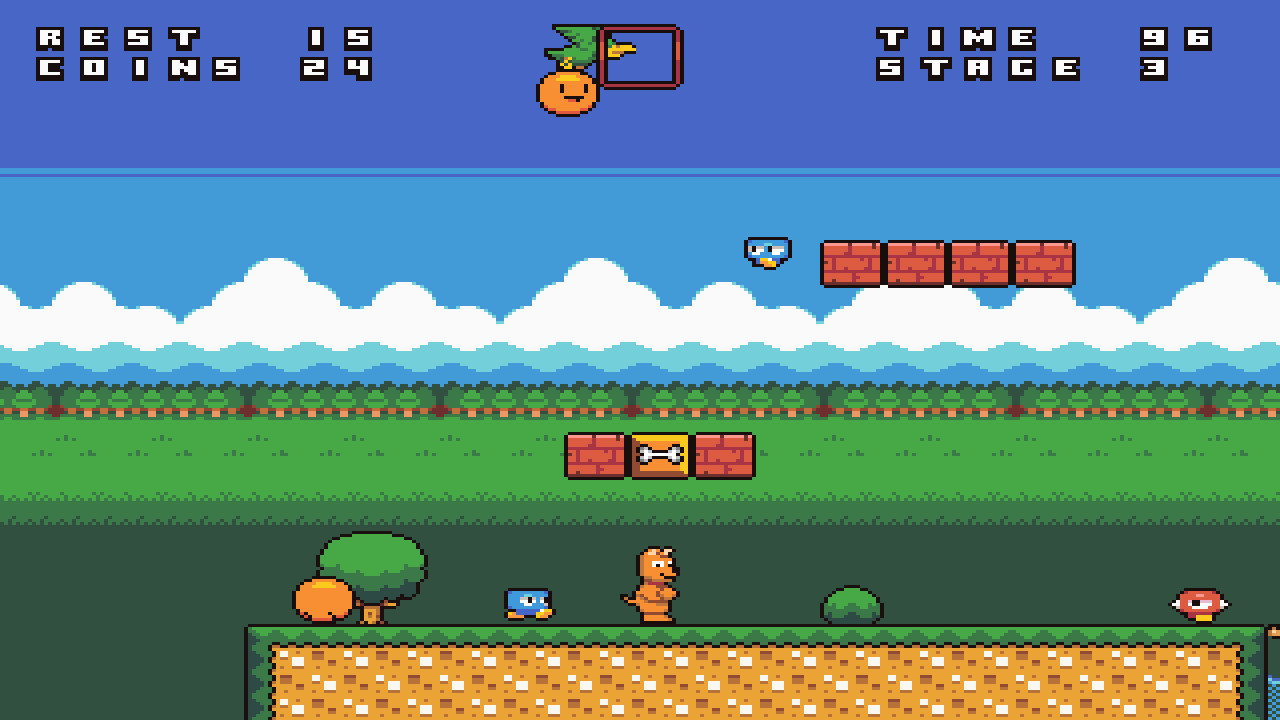 As with many platformers hoping to rekindle the olden years, the game is fashioned with a retro art style. Landscapes and backgrounds feature bright color palettes and minimalist pattern designs depending on the theme of the zone. There are also minor details to each zone, including little oxygen bubbles in water environments and the leaves blowing during autumn settings. Enemies are adorable with some of the bosses still having this malicious look to them due in part to the superb character and movement animations. Basic sounds are used for certain actions such as jumping, enemy hits and block destruction. Behind the scene, however, plays a selection of upbeat chiptunes that mesh well with the visual aesthetic.

The story is rather generic, but it is more a placeholder narrative to justify the journey than a main feature. The canine kingdom is brought to its’ knees as a mysterious demon decides to kidnap the local princess and her litter of puppies. The demon decides to lock up the princess in a far off castle (because it is always a castle), but soon discovers an ordinary dog is in pursuit. This brave canine must overcome fierce obstacles to rescue the princess and restore peace to the land. It is a short, sweet and simple motivation that ends up propelling the protagonist through the 32 levels that populate the game.

The only objective is to get from point A to point B with the occasional boss fight to mix things up. It does not matter how you get to the dog house at the end of the level; it just needs to be entered before the timer runs out. Levels can be surprisingly simple in design, but placement of enemies and bottomless pits make timing a crucial component to succeeding. One second of hesitation can be the difference between avoiding an obstacle and finding yourself back on the level select screen. It doesn’t help that their are no save options, making each playthrough a one-way trip. Certain stages also feature unique mechanics such as the dreaded moving screen and forced vehicular platforms that travel along the stage and require the player to remain in close proximity. This is where the four items come in: umbrella, bone, boomerang bone and glasses.

Each item can be randomly received by head butting an item box and also provides a one hit protection from enemies at the expense of the item. Due to the “one hit and dead” mechanic and the 15 lives available at the start, it is always recommended to have an item even if it is not desired for the particular area. The umbrella provides the ability to fall slower while the glasses are used to detect hidden portals. The bone provide an arc based attack best suited against hovering enemies and the boomerang bone fires in a straight line before retracting in the opposite direction. While they are not required, these items have the potential to turn the tide on any map and make eliminating bosses (especially the secret final boss) much easier to handle.

Enemies are scattered throughout the level and must be jumped on or hit with a bone to defeat. It is possible to avoid them either by jumping on platforms or timing jumps over them as well. Bosses require multiple hits to bring down and must be avoided until the opportunity to strike opens. Some enemies cannot be killed by jumping and require the bone to eliminate. Obstructions also exist in the form of pit falls, lasers erupting from clay pottery and some pesky spike placements. They are the standard staple of platforming that will always find a way to kill a perfect run.

Portals are located in each level and provide one of two possible advantages. Secret portals allow entry into special rooms with coins (collect 100 for an extra life) and items (including the rare extra life), but also provide a shortcut to a point further down the stage. Level portals allow the player to skip several stages at once and provide access to each level that is skipped should the player decide to backtrack. The portals are hidden by default and require the use of glasses to see them. They can be entered without the glasses as long as the position is known. Due to the limited number of lives, these portals are almost required to effectively reach the final dungeon with enough lives to conquer the final boss.

The technical side has been bug free and smooth running throughout the entire experience. Controls are responsive, albeit a little floaty depending on how fast the character is running. This has led to some premature deaths, but it has usually been due to timing over anything out of my control. I have yet to experience any crashes and frame rate has been stable. I did have one small point to address that may seem minute, but really made playing this game so much easier. The options menu allows for key rebinding and offers game pad support. These features are usually expected nowadays, but it is always great to see them implemented.

In a time of technically lackluster releases, early access focused development and unbearable YouTube bait, it is refreshing to see a simple game with a simple premise. Super Jagua is a tribute to some of the greatest games of yesteryear and it pulls it off admirably. Visuals are pleasing to the eye, music is catchy, platforming is smooth and the difficulty is present without being overbearing. Above all else, the game is enjoyable without relying on gimmicks to mask its’ simplicity. This little gem is a steal for its’ current price, offering plenty of replayability in the form of achievements and multiple endings. I highly recommend this game to anyone interested in retro-style games or fluent in platforming.