Talent Not Included is a tough platformer set on an ever changing stage in a drama. Does it reach for the stars or flops worse than any other act out there, let’s find out: 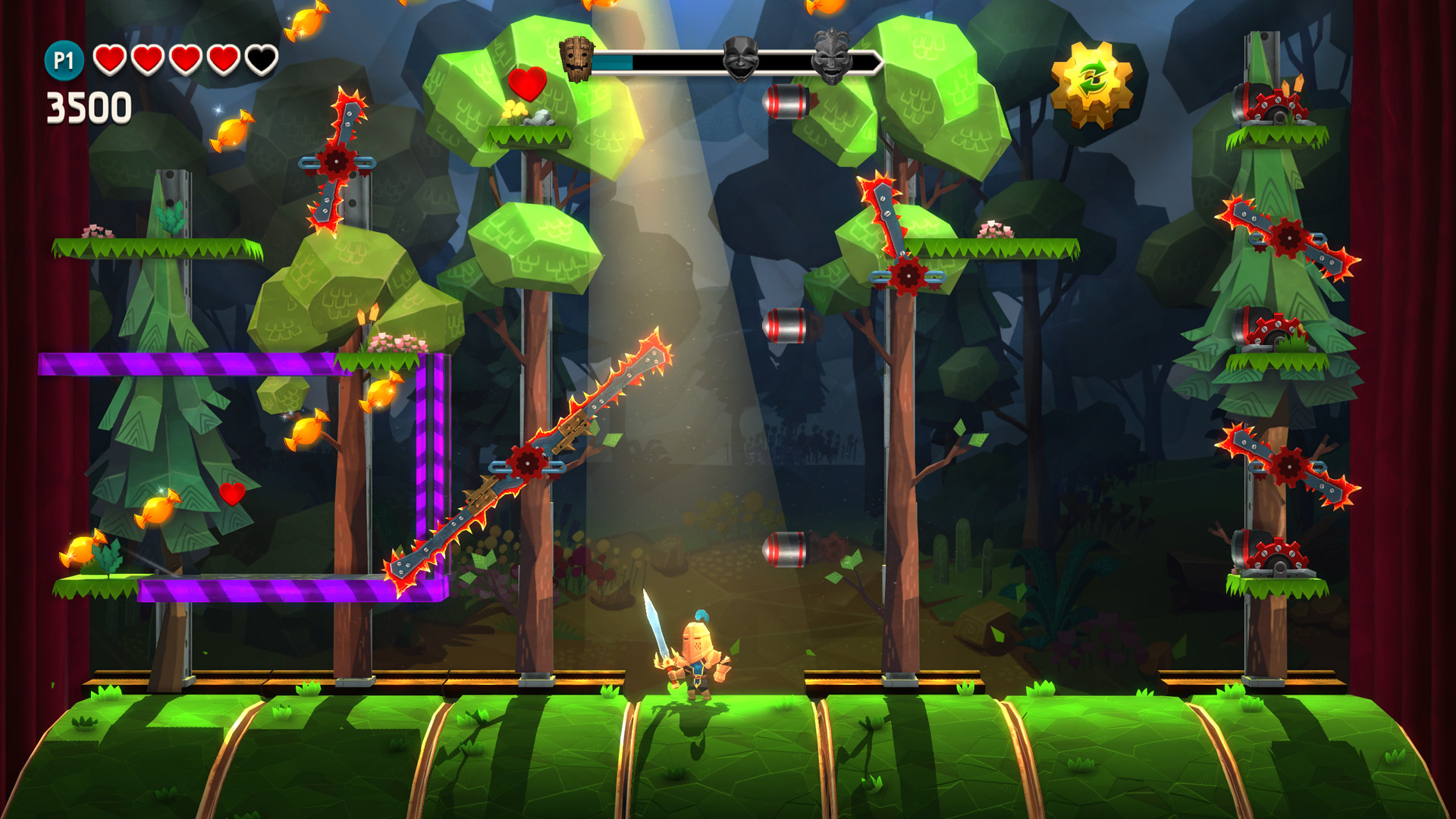 Talent Not Included is set on a drama stage where the audience waits for the heroes to put on a good show. There are three acts which pits you in the shoes of three different actors: The least stressed knight I have ever seen, a wizard who can’t stop smiling and a sly Rogue. All three acts are further divided into 15 stages, where you encounter a Boss every 5 levels. Every boss in a single stage is the same, but has different tricks up his sleeve to up the difficulty a notch.
Talent Not Included’s tutorial system is one of the best I’ve ever seen to date. In each act’s beginning, you are given some obstacles which perfectly makes you acquainted with the hero you’re going to play with. All three actors defy what their director has asked them to do but instead go with a different aim of their own. After you complete an objective the whole stage changes and set up a different set of obstacles. If you’re standing at a high platform when the stage changes, you might fall down on a newly emerging set of spikes. This makes you keep on your toes at every single moment.

Don’t be fooled by Talent Not Included’s pretty visuals though, the game is quite difficult. It does not seem unfair, but the difficulty levels keeps climbing at a steady pace. Some stages will require you to only get from one side to another by dodging a couple of enemies and sticking to walls but the other might see you jumping through two rows of spikes. The controls are solid and the characters all are very well rounded. The knight uses melee attacks, wizard can use ranged attacks, teleport and so on. 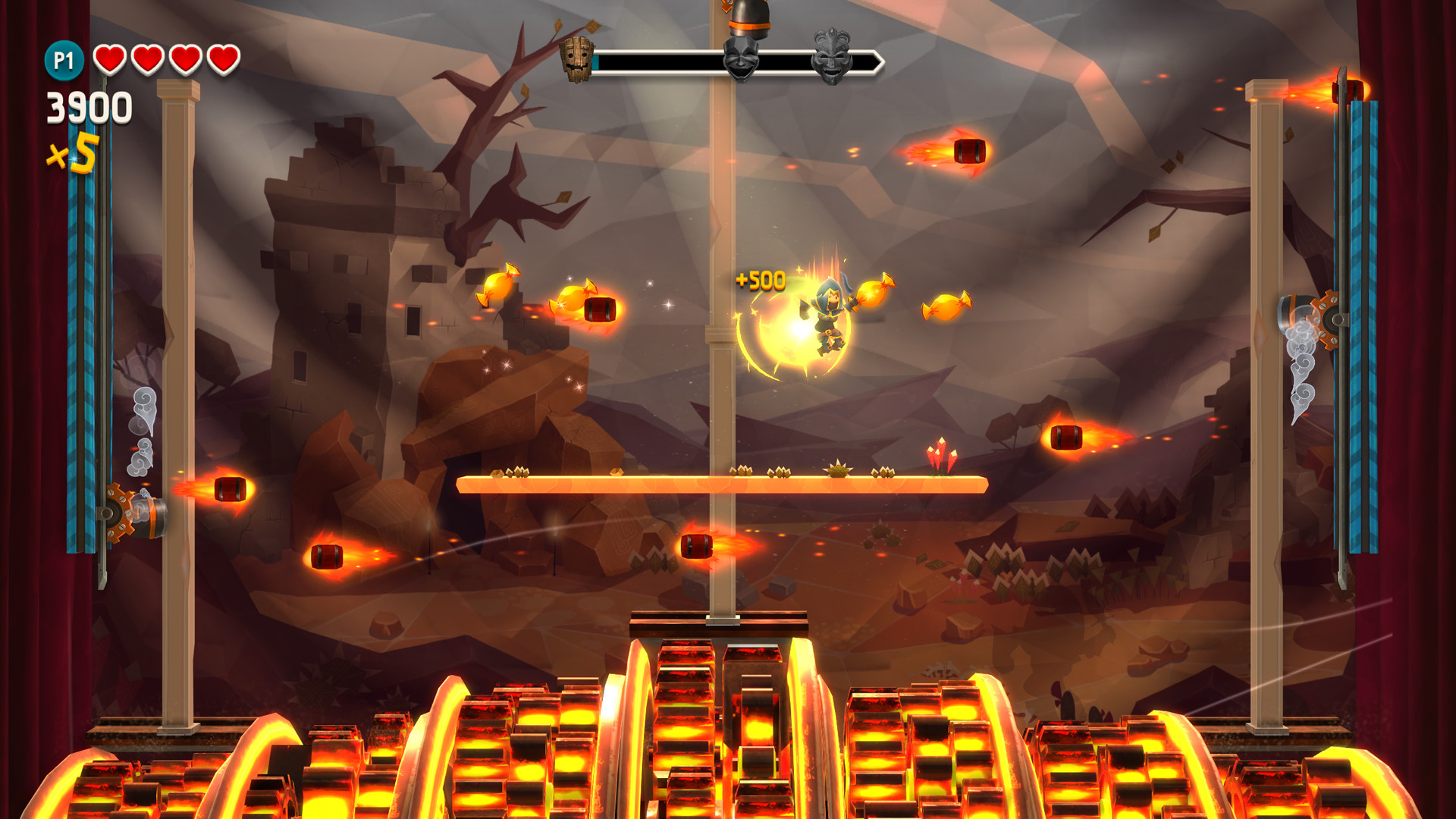 Not everything in this play is perfect though, the characters feel a little slippery and sometimes do not stop where they should and results in plenty of cheap deaths. While you can go over all the obstacles with a controlled hand, one slip and you are sent into a frenzy of obstacles which leaves you near death. Add to this the prospect of collecting candies in between to increase your highscore and you might want to go back into death’s mouth just to collect that one candy that you somehow missed. There are still a lot of bugs present in the game and constant crashes which leaves a sour taste in your mouth after you’ve tried to complete a level. There is a fair amount of content that will take some time before you finish it.These are but minor nitpicks which can be fixed and doesn’t put too many black dots to distract from the grand play taking place.

There is an option to play co-op with your friends. This does not change the levels or do anything other having another player on the screen. You can take the life of your friend though when you’re dead and that’s pretty much it. There is not much special features included in co-op if you were looking for that sort of experience. Even without co-op though, Talent Not Included is a great game and one you can sink hours in. 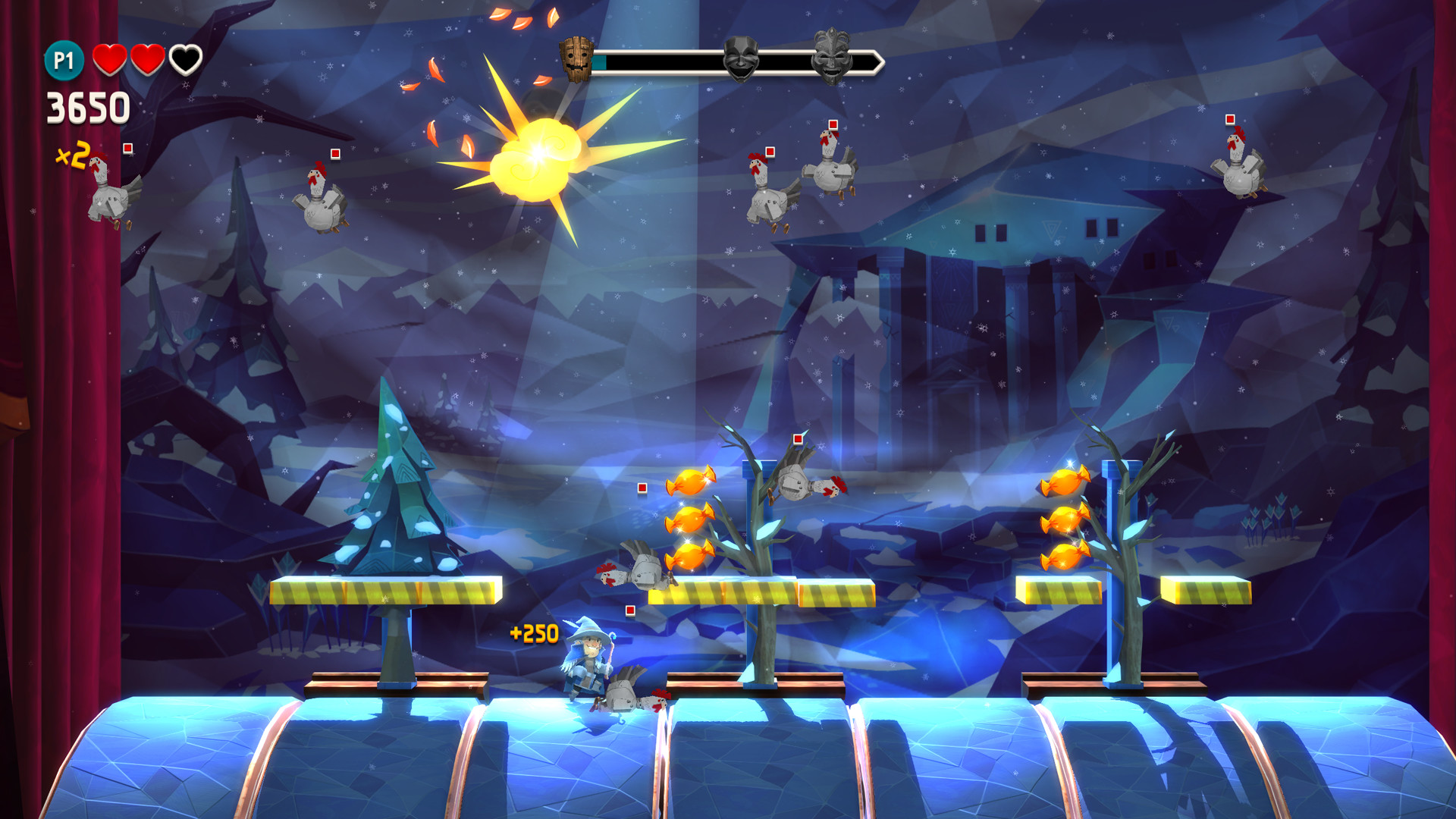 Talent Not Included has a very cute and clean look. There is no useless things cluttering your screen at any time and the transition of the stage is very pretty to look at. It really gives the sense that you’re performing on a stage and not in a forest. The platforms also look like setpieces and the enemy designs are generic but cute. The characters themselves sport a very classy look with a bit of finesse. To actually make you feel like a hero of your act, there is a spotlight which follows you everywhere you go and it really gives a great feeling when the stage is first lit up and the spotlight falls upon you and the audience prepare themselves for the show. Talent Not Included is a beautiful game which will be liked by mostly everyone who plays it. 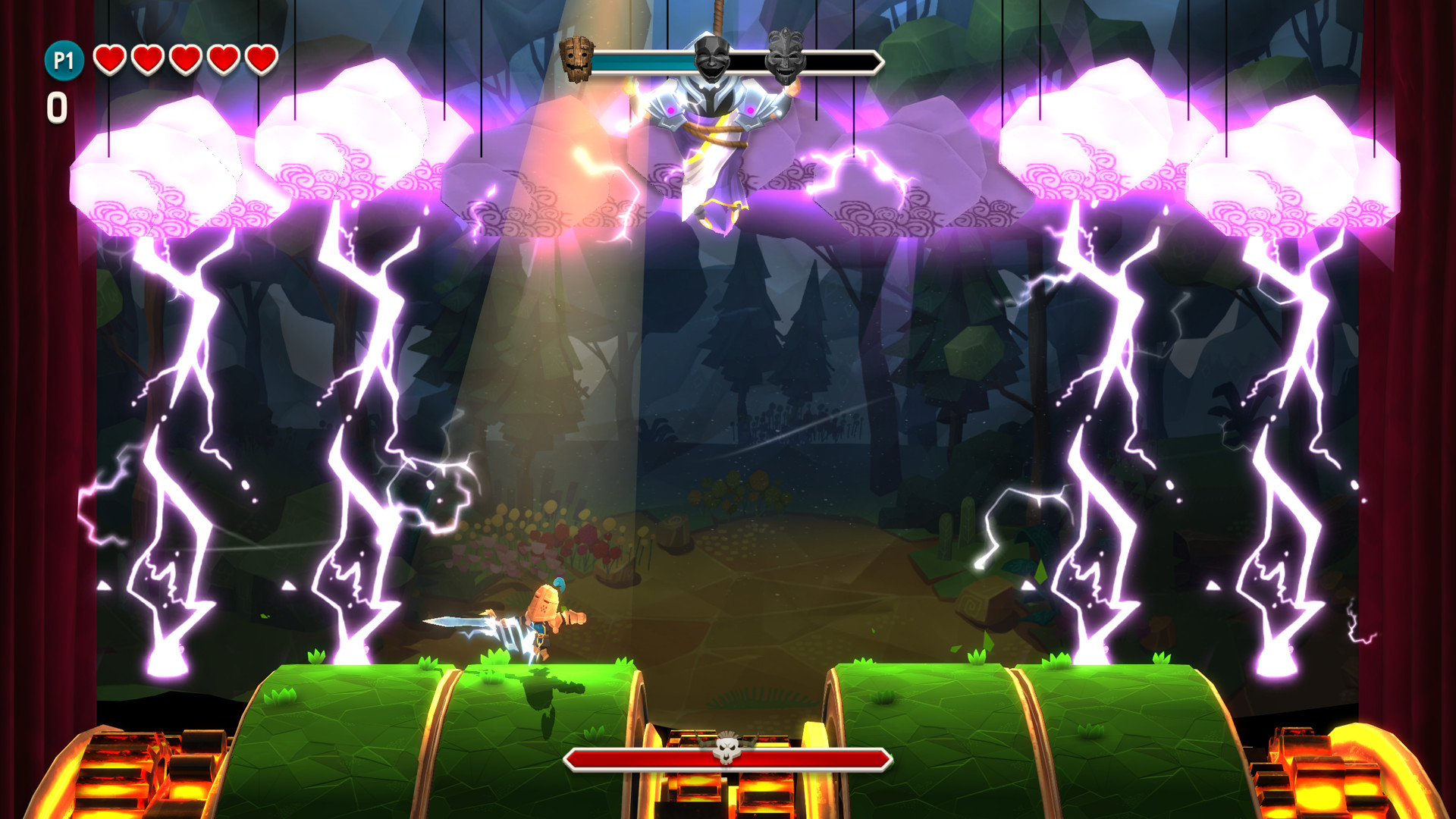 Great Sound design through and through. The main soundtrack itself is very nice and peaceful, what stands out and really makes the environment are the little touches. Before the act starts, you can hear the audience whispering with excitement in the start and booing when you fall in the battle. Their chant when you’re left with one heart really pumps you up and makes you complete the act for the audience. Other touches like the starting quips by the hero or his grunting every time he jumps also adds to the already solid environment and compliments its visual design very nicely. 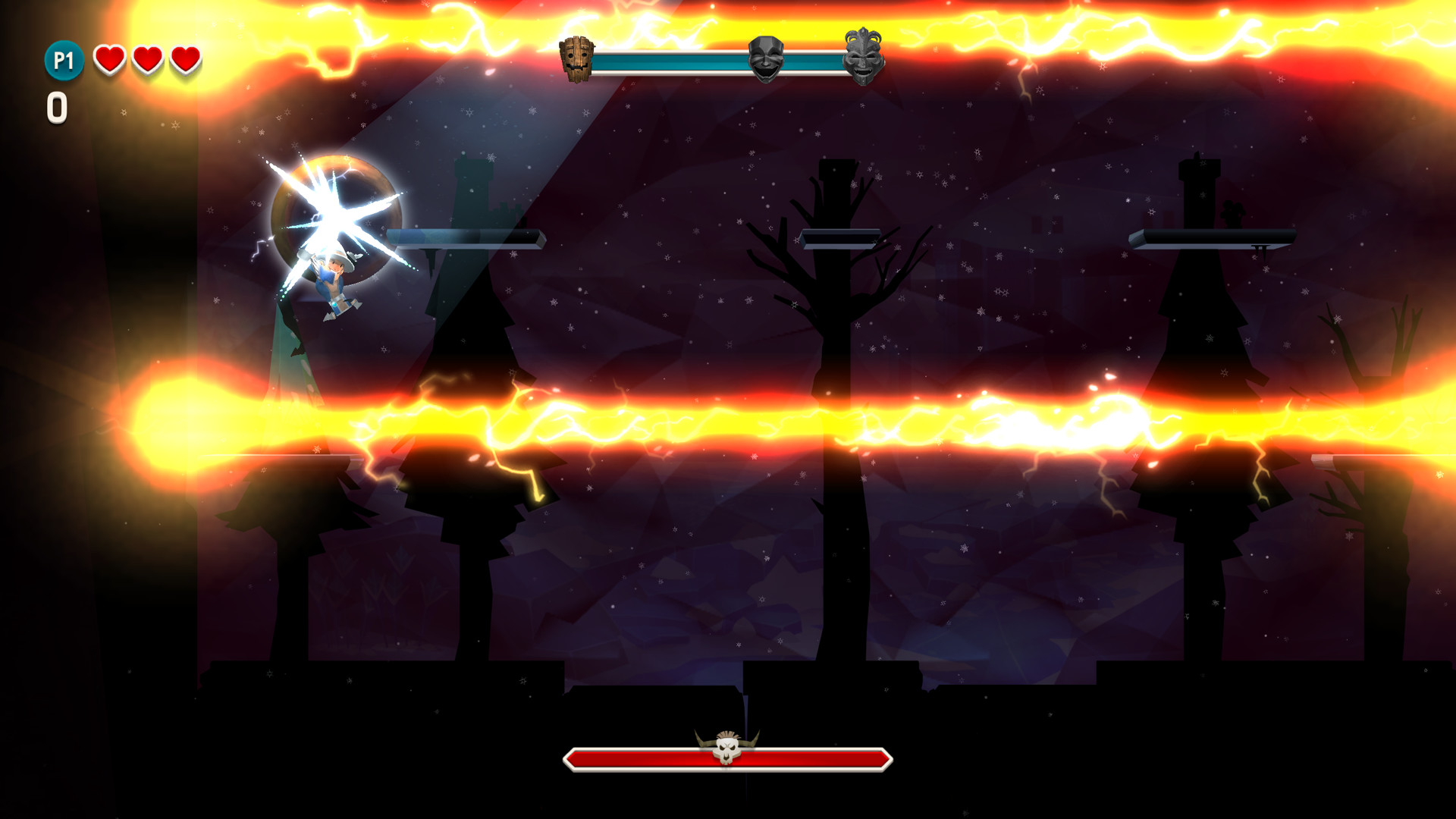 Talent Not Included is a very solid platformer with a clean art design and a good soundtrack. It handles well and is humorous enough to give you a few laughs. The co-op is pretty limited and you should not buy this if you want that specific kind of experience. It has enough single player content to justify its asking price and oozes a lot of charm. If you like good but difficult platformers, you will enjoy this one. If you are new to the genre, there might be better options out there but Talent not included still has the potential to be among the greats.