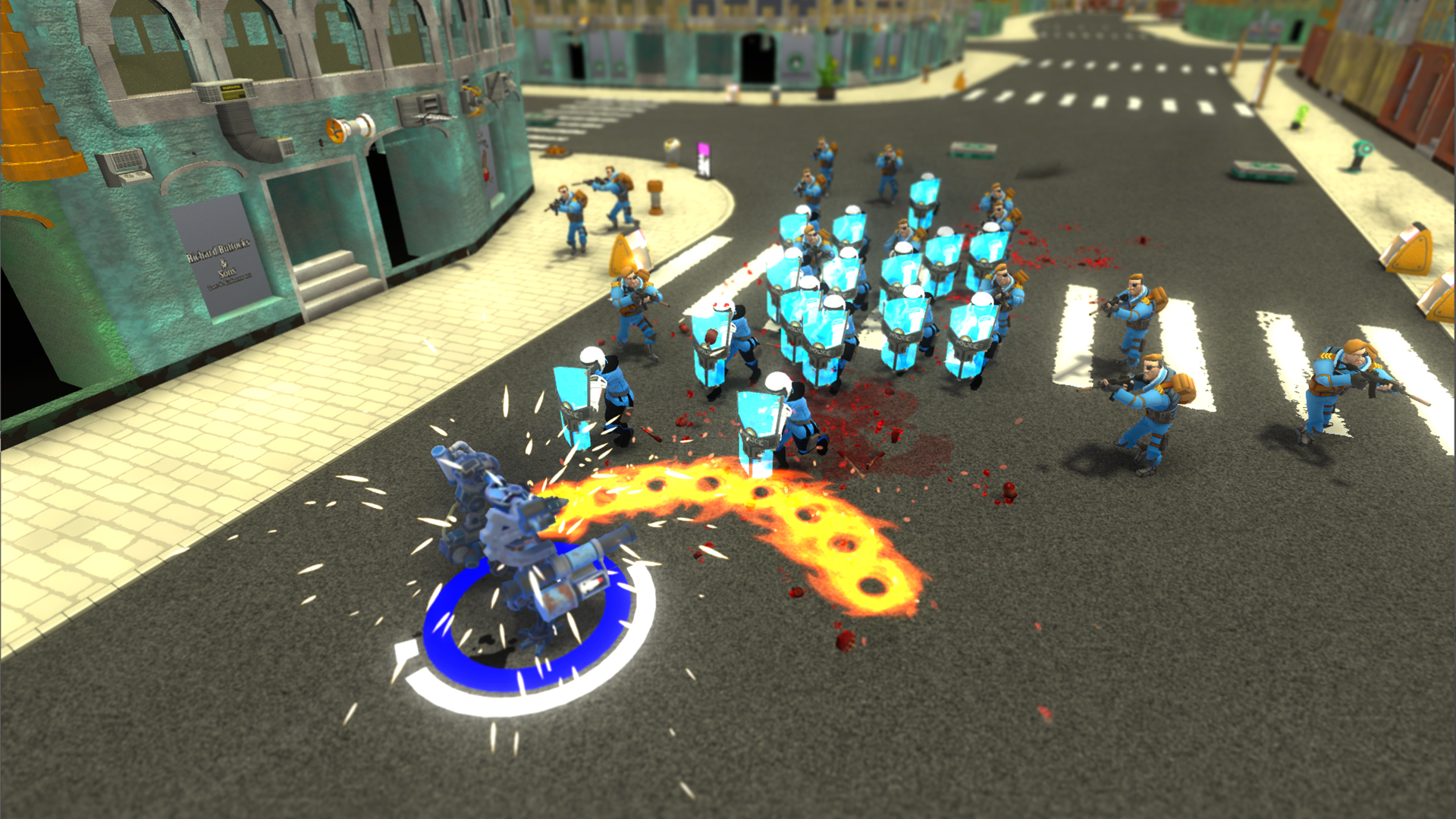 Spareware is a science fiction twin-stick shooter from new indie developer, Rusto. In Spareware you play a robot attempting to save humanity. Exactly what we’re saving humanity from I’m not quite sure — the story’s a bit haphazard — but I believe it’s an evil AI overlord or something. In any case, during your quest you’ll certainly end up killing quite a lot of humanity, so I’m not convinced that it’s worth it in the end. 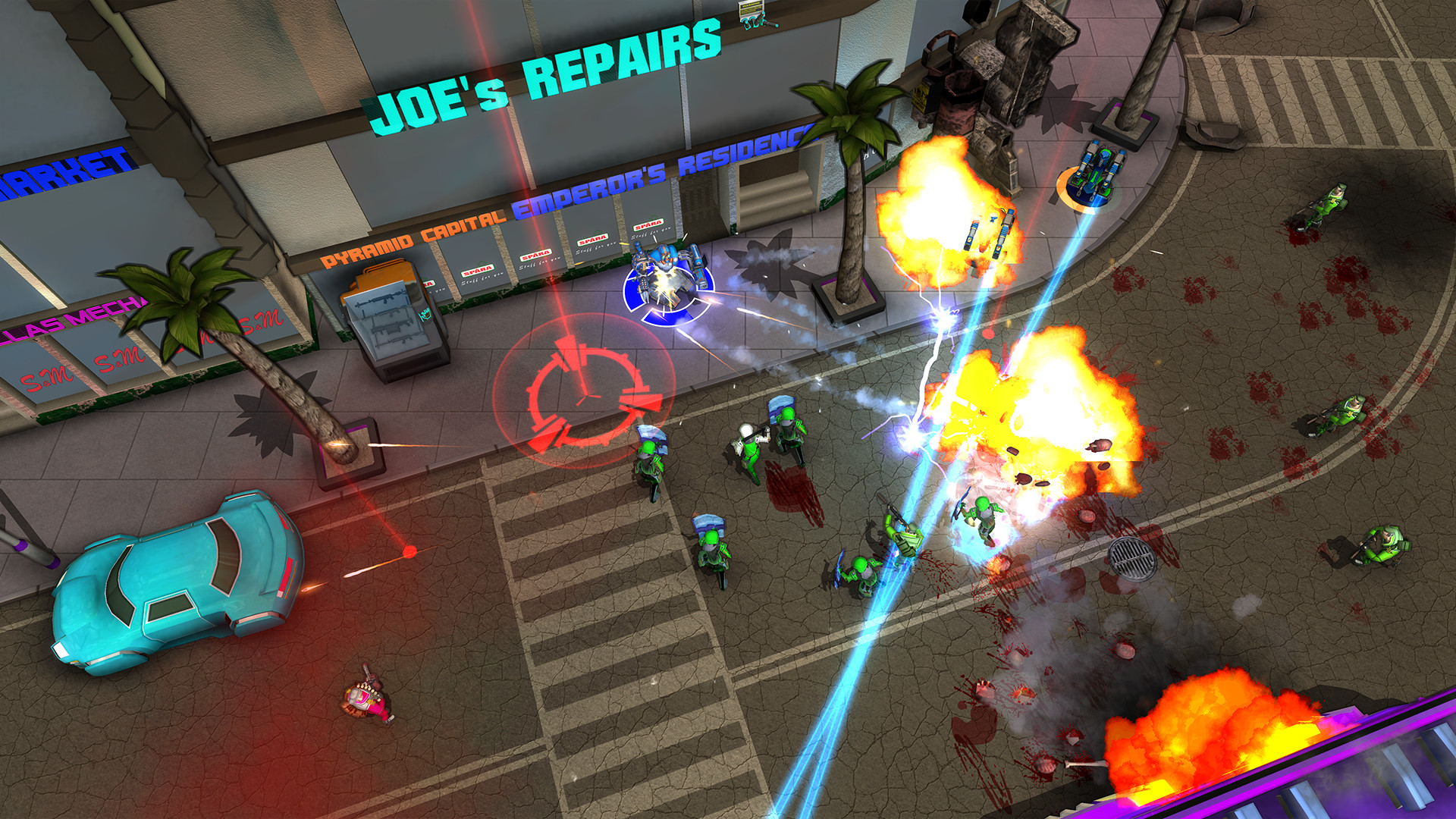 Graphics are mostly colourful and cartoon-like, with the use of gore seeming a bit out-of-place, although it does fade quickly. The graphics work well enough, but feel very bland after half an hour or so. Once you’ve seen one level, you’ve pretty much seen the whole game.The player character robots are interesting, with interchangeable parts — legs, torso, two arms, and a head — each with in-game effects. Graphically they look good on the loadout screens between missions, but with no way to zoom in further than the default, and no adjustment of camera angle, the in-game graphics are somewhat disappointing. Weapon animations and special effects are mostly good, but a bit too far away from the camera to be properly appreciated. 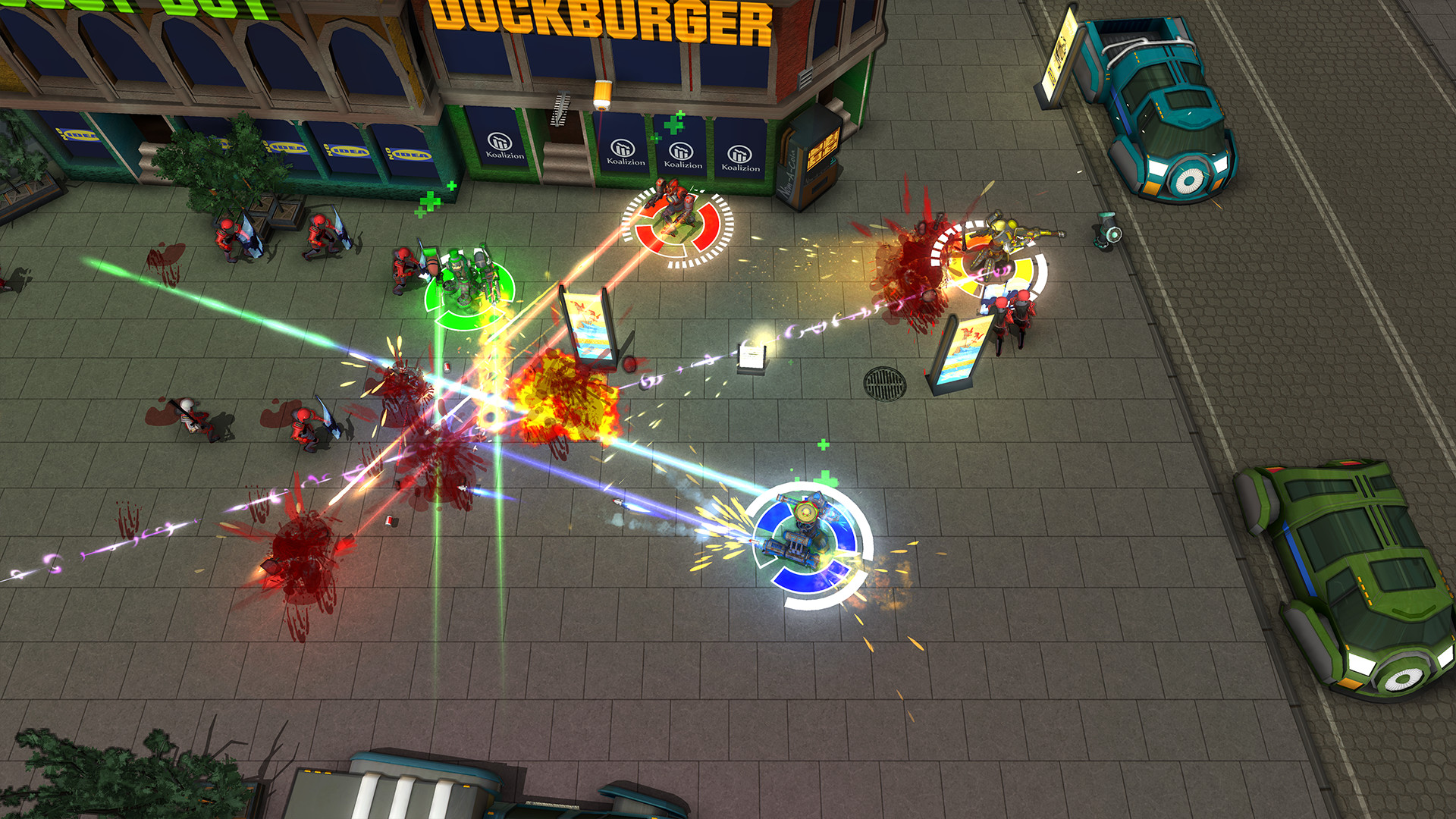 The view is fixed to a three-quarter overhead viewpoint, which is a bit restrictive. Given that the characters and levels seem to be fully modelled in 3D, I’m not sure why the developers didn’t at least allow free rotation of the camera. There’s a ‘zoom level’ option in the Game Settings menu, but for some reason there’s no in-game control for this; you have to adjust it from the settings menu. Graphics options are very limited: screen resolution and full screen / window mode, with no detail settings or special effects. There are no cutscenes, but the game could do with some to explain the overall background story and individual mission objectives. The user interface is large and simple, but still manages to be a bit confusing to use. 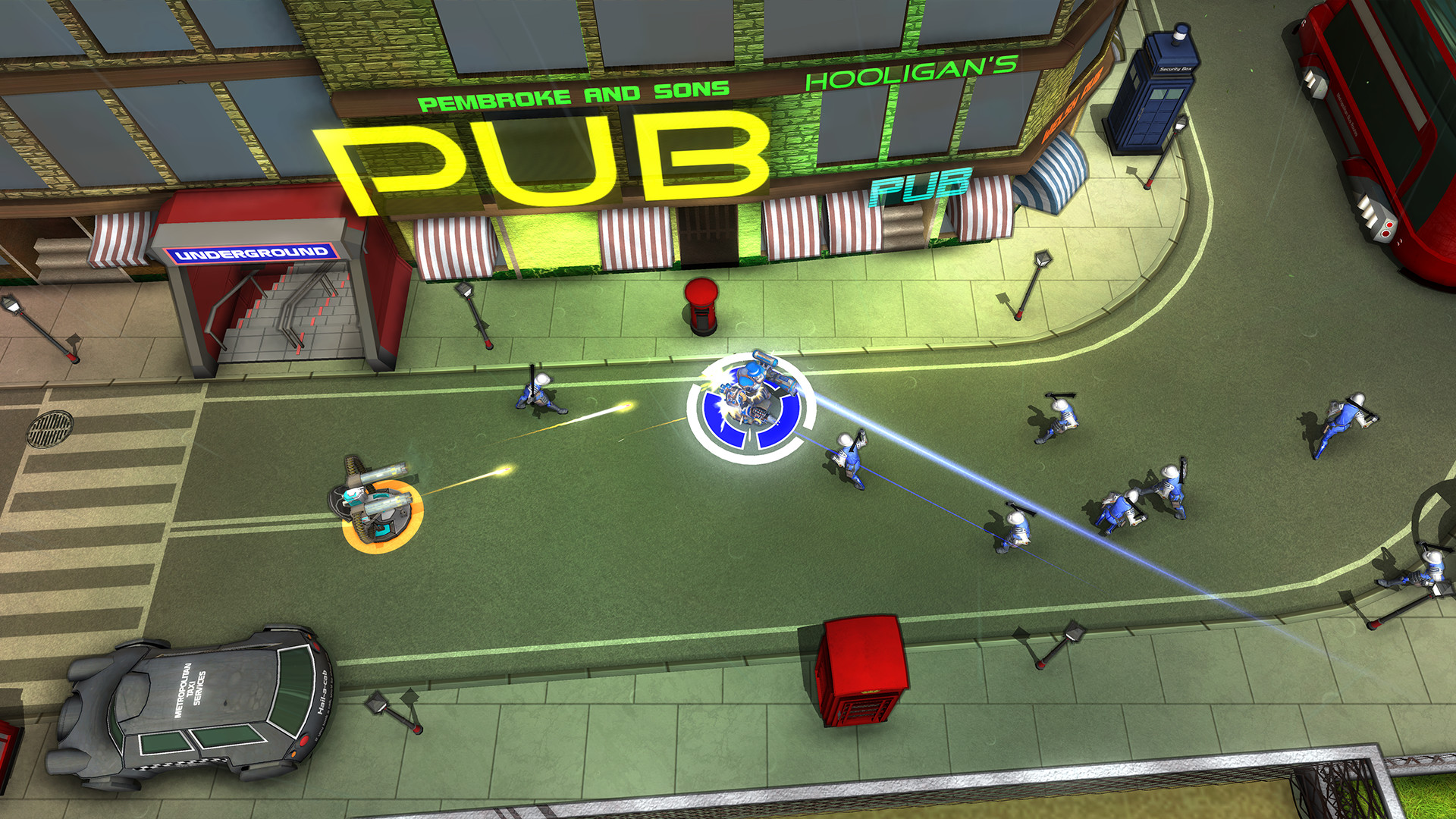 Music has an electronic rock feel to it, with heavy beats and electric guitar riffs mixed with some modern synth type sounds. It’s okay, but a bit heavy for continuous play. After an hour or so I found myself getting annoyed with it and turned the volume down. Sound effects are drowned out by the music on the default volume levels, but once you turn the music down they do a good job. There’s a lot going on, though, and some more obvious auditory warnings of damage would be appreciated. There are no voiceovers and I haven’t seen any cutscenes. 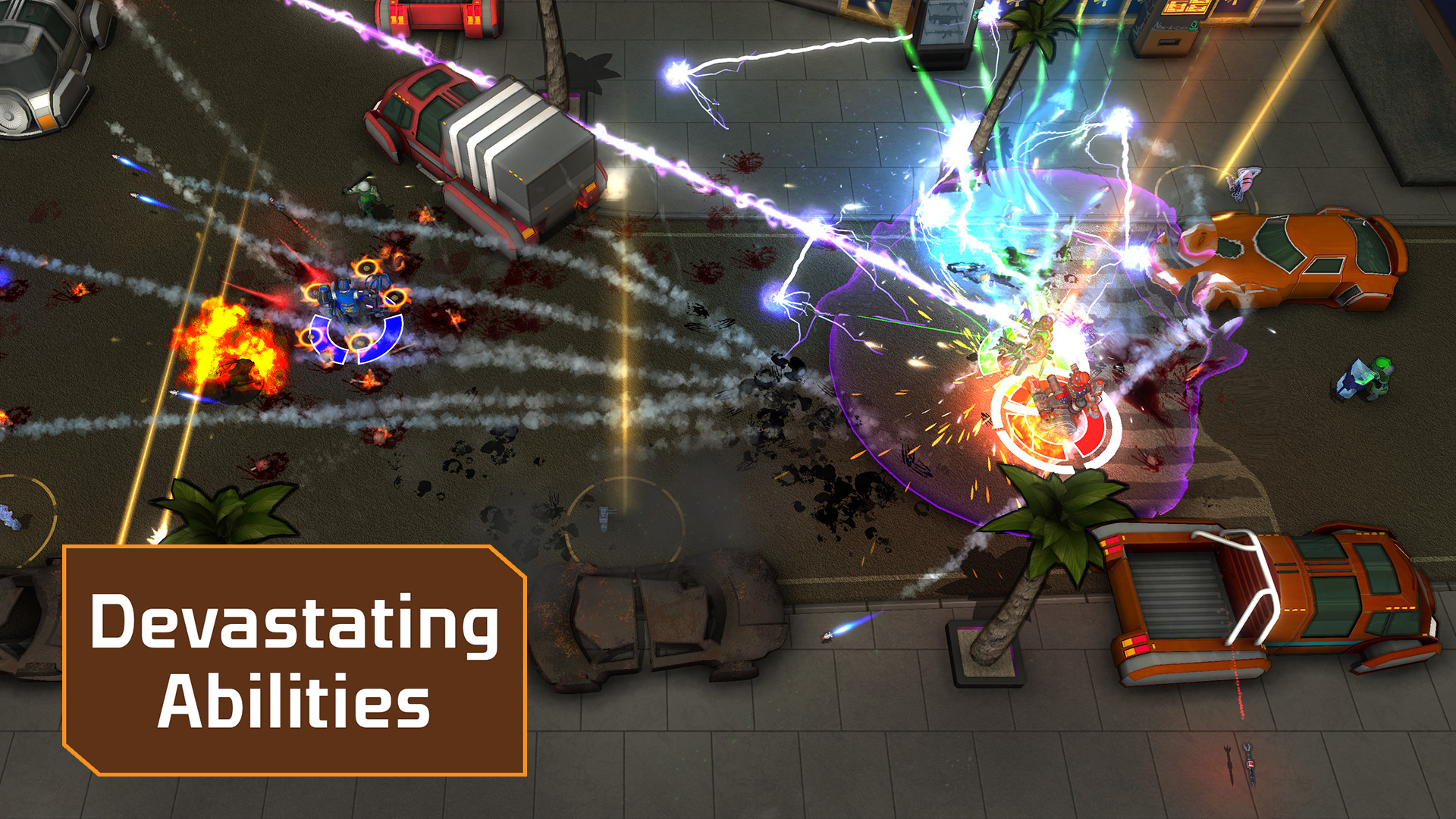 Spareware throws you and up to three friends — local PC only, unfortunately; there’s no network multiplayer — in one of three futuristic cities, roaming the streets mowing down aggressive humans and robots, blowing up forcefields and cars, and collecting power cells and other goodies. Sounds great, doesn’t it!?

Unfortunately, the levels, although seemingly ‘randomly generated’, all feel the same, as do the enemies. Spareware throws away tactical combat and variation and replaces it with hordes of endlessly spawning mobs, using sheer numbers to overcome the players. And the developers made one very strange design decision: any enemies with shields, as well as any force fields in the level, reflect your attacks back at you, so you’ll end up doing more damage to yourself than the enemies do, in many cases. 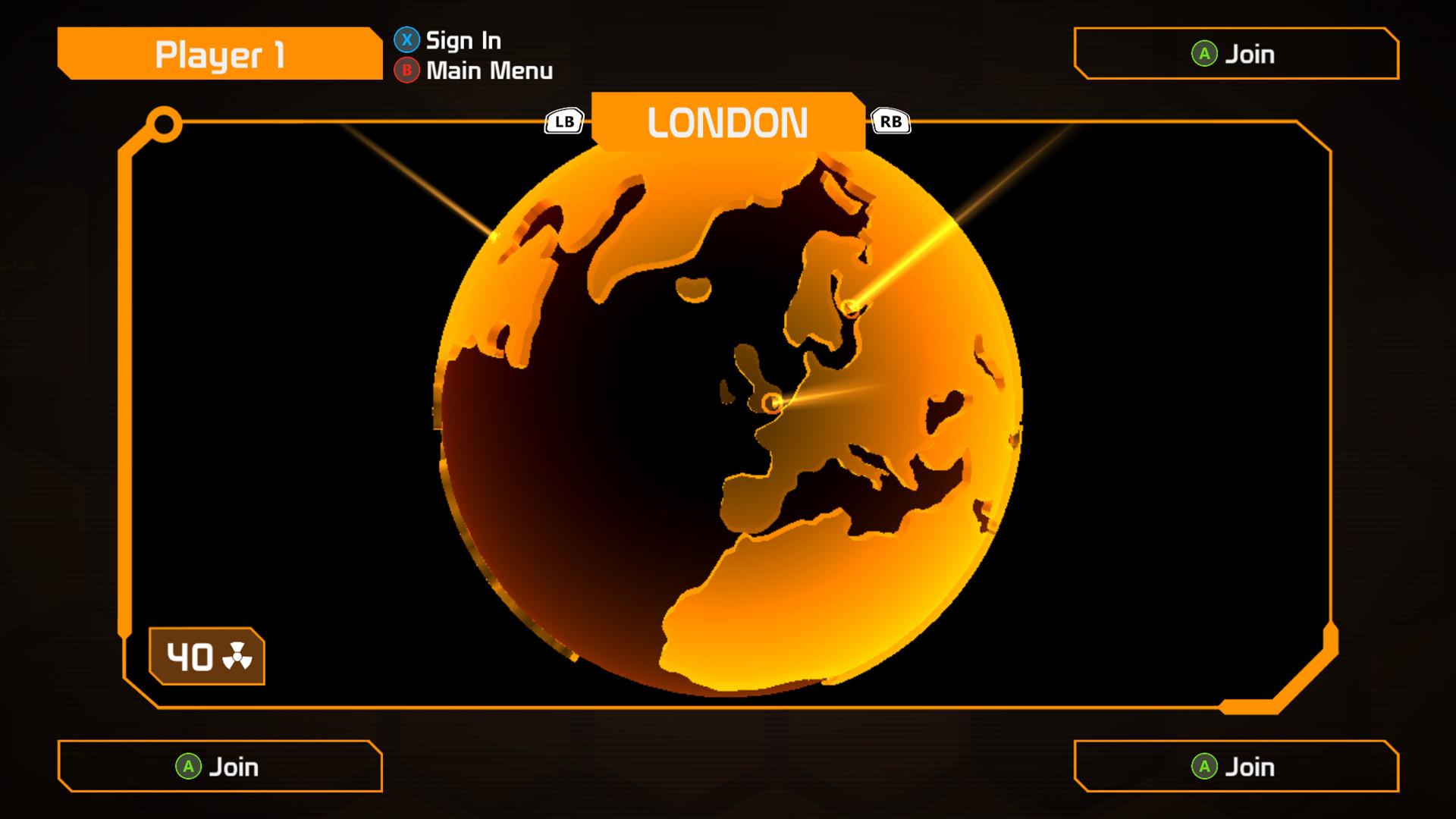 A big part of the appeal of Spareware is unlocking the many body parts and equipping your robot to be a bad-♥♥♥. As well as unlocking the parts, through achievements or finding them in-game levels, they also cost power cells to use, of which you have a limited supply. As long as you finish a level successfully with a part still intact, you are reimbursed the cost at the end of the level, but not knowing what you might find during the level, and not being able to choose individual parts to swap out or store new parts, you may find yourself having to give up your best body part in order to unlock a worse one that you find. Not only that, but the parts are mostly not that great improvements. You’ll find minor differences in heads, torsos, and legs, and the weapon arms I’ve found so far have been less useful than twin bolters — one of the starting weapons! Oh, and anything you unlock through finding it in-game isn’t permanently unlocked — next time you play it’ll be locked again! 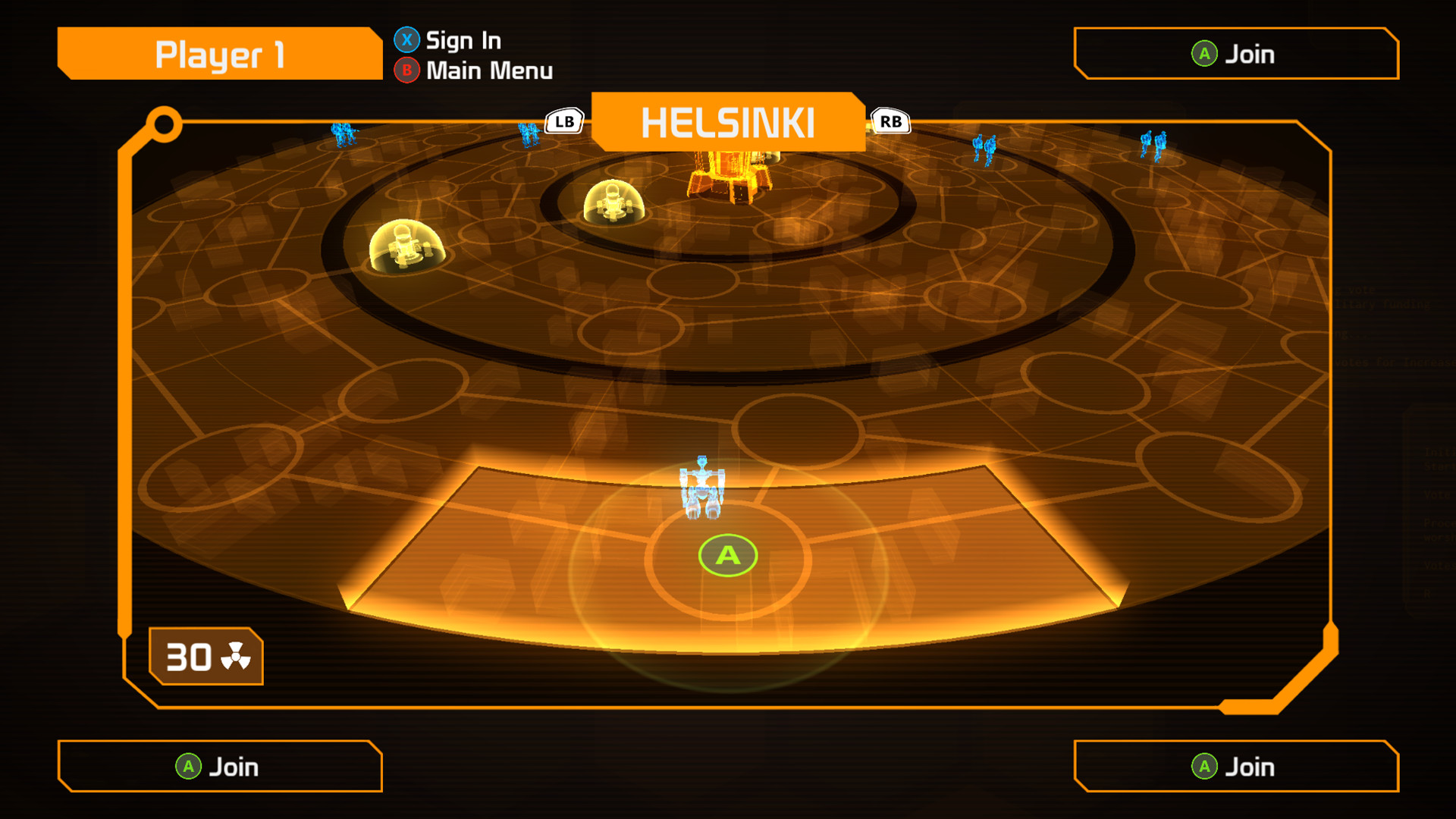 Control wise, Spareware plays like any other twin-stick shooter: WASD or left controller stick for movement, and mouse or right controller stick for aiming of the target reticule. Robots each have two weapons, one on each arm, with independent firing rates and ammunition, and also up to three abilities active at once.

Spareware includes full controller support, but I chose to play with mouse and keyboard instead. Unfortunately these controls aren’t great. You can remap them to make them slightly better, but you’ll probably still find yourself losing some movement control in order to activate one of your three abilities. I also found that the key binding sometimes took a few goes to ‘stick’, with some of my attempts ending up with ‘?’ shown in the controls screen. To make it even worse, the game won’t let you rebind controls from the in-game pause menu; you have to quit to the main menu to do that. 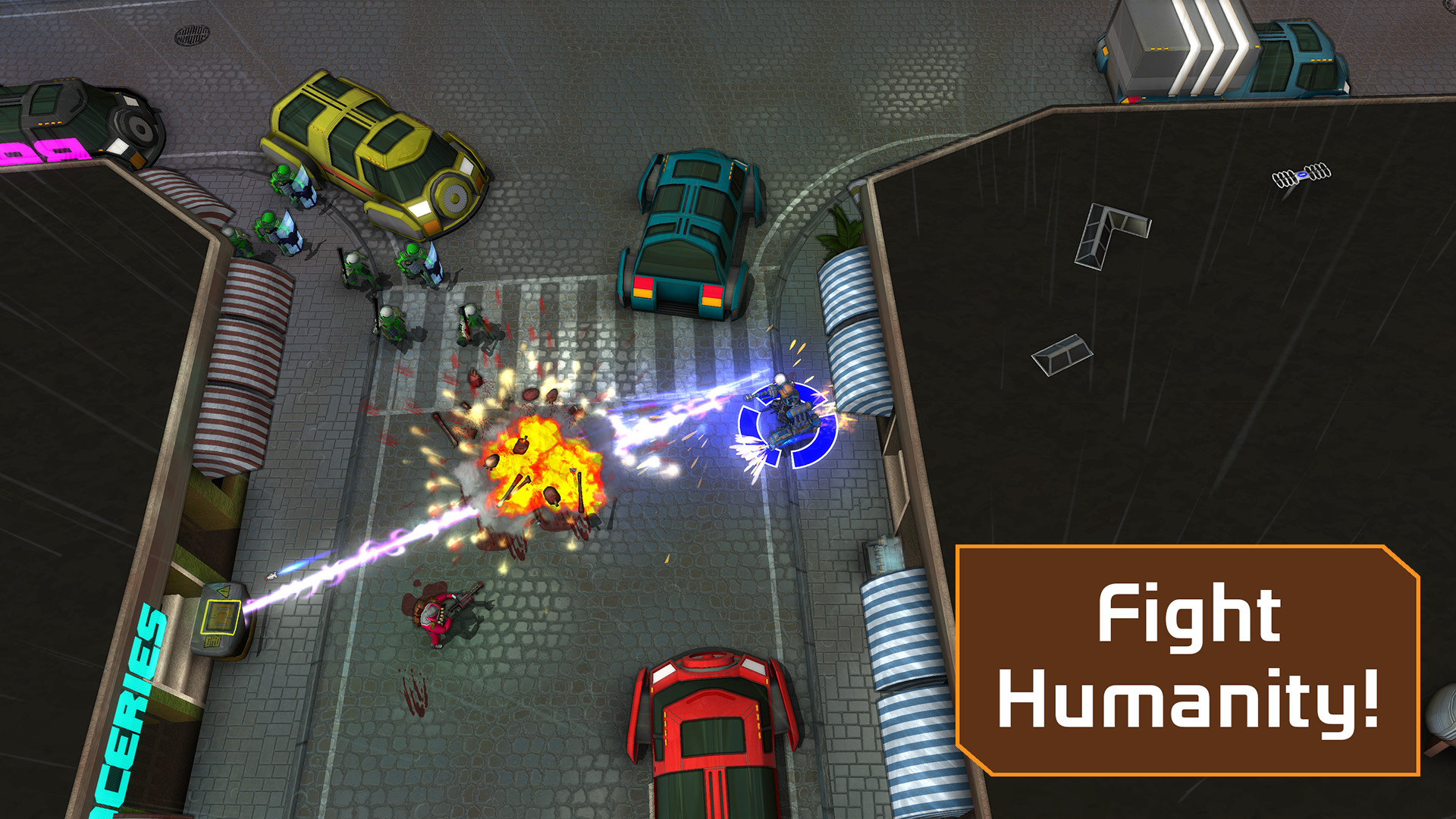 I’ve only had a chance to play single player so far, given the lack of networked multiplayer, and Spareware is a bit of a letdown in that regard. It’s repetitive and boring after a few levels on your own, and made more frustrating than it should be by the design decisions made by the developers, especially the big three: enemies reflecting shots back at you, weight of enemy numbers and continual respawning to jack up the difficulty, and activating weapons and most abilities causing your run speed to drop. There’s also otherwise pointless cosmetic level geometry often stopping you in mid-run when you try to run past it, which has caused my robotic death a few times. The game also seems to be focussed on multiplayer, as the difficulty jacks up hugely in the inner rings of each city due to the increased health of enemies and sheer enemy numbers, which quickly overwhelm a single player.

Finally, there are a number of smaller issues that mostly fade into the background when you’re confronted with the bigger ones: there’s poor grammar in the in-game text, the story is not explained, the tutorial is lacking, and sometimes body parts spawn inside level geometry where you can’t collect them. 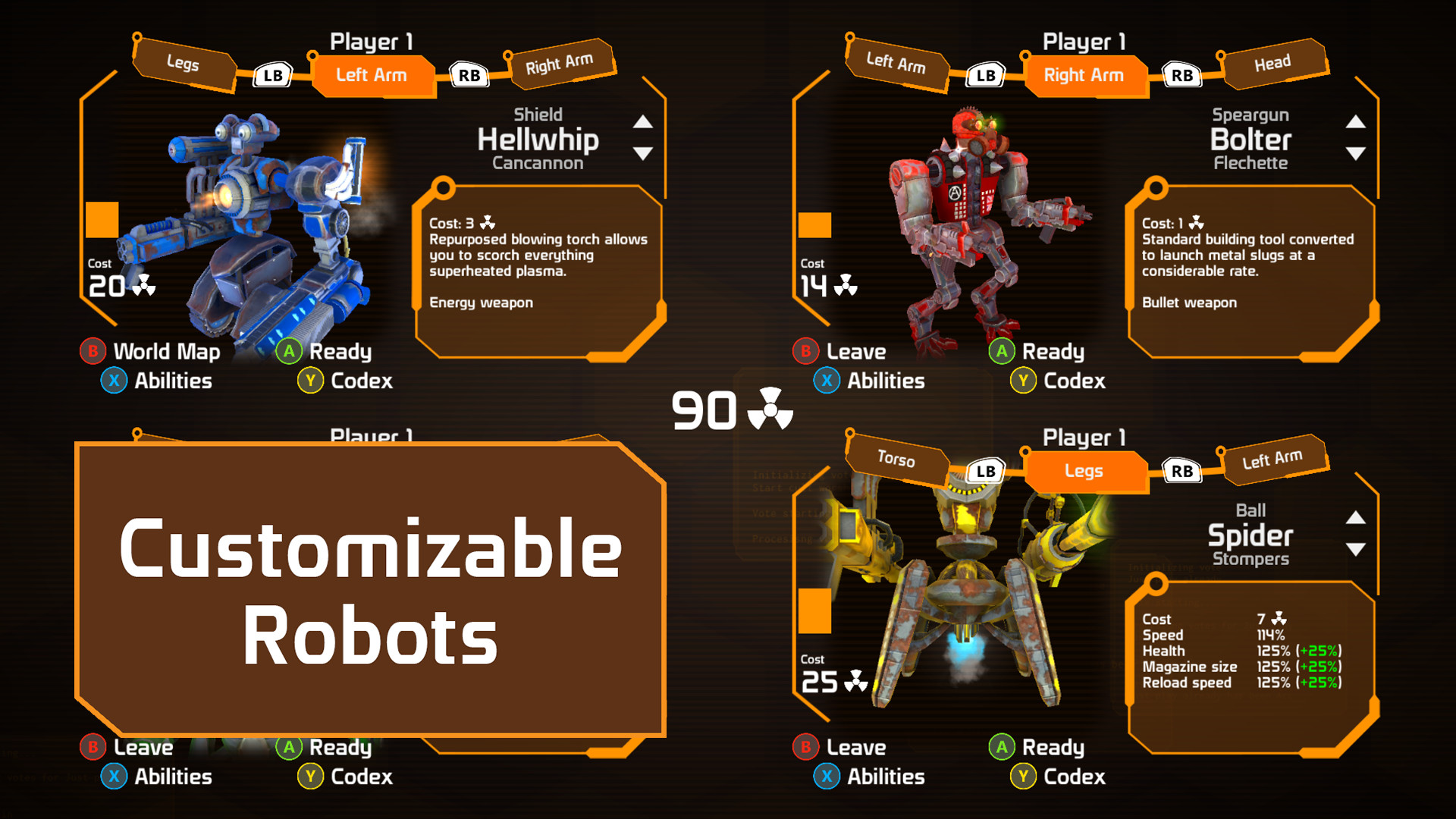 – Endlessly respawning enemies that reflect damage back at you
– Very little variation in enemies and levels makes the game repetitive after only a short while
– Bland level design and graphics make every level look the same; most enemies are just re-skins
– Poor in game text; weak story
– ‘Roguelike’ elements hyped on the store page are minimal and fairly poorly implemented 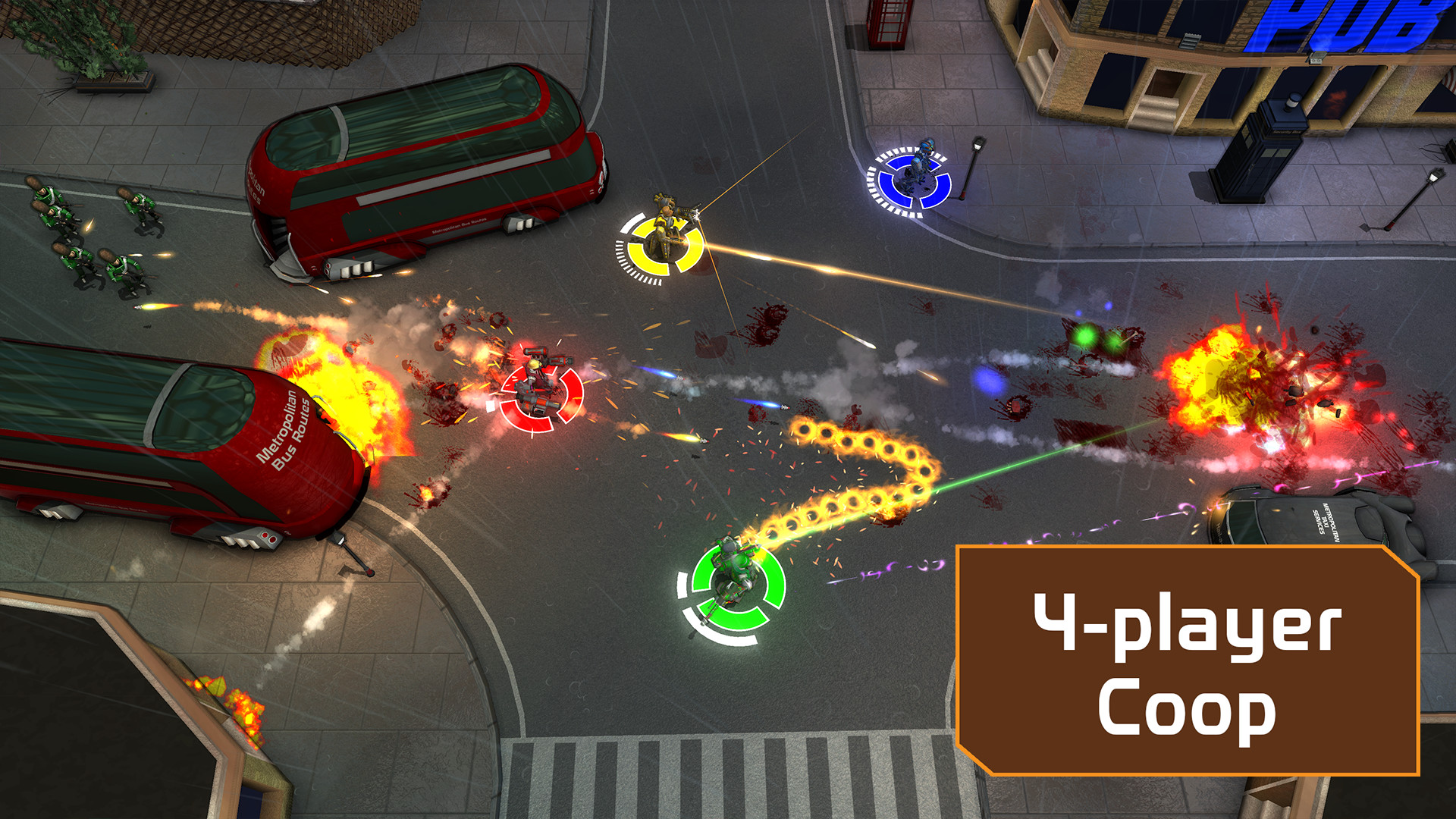 Overall, I’m disappointed with Spareware. It’s the sort of game I’ve loved this year, but other games in the genre such as Kill to Collect and the excellent Neon Chrome have done a much better job. Compared to these, Spareware feels like an Early Access title with some core design decisions that really need revisiting, and there’s just not enough variation to keep it interesting beyond a few hours’ play.

If you have local multiplayer friends play then it might be a good pick up on sale, but especially if you’re hoping to get your money’s worth out of single player, I just can’t bring myself to recommend it to you.