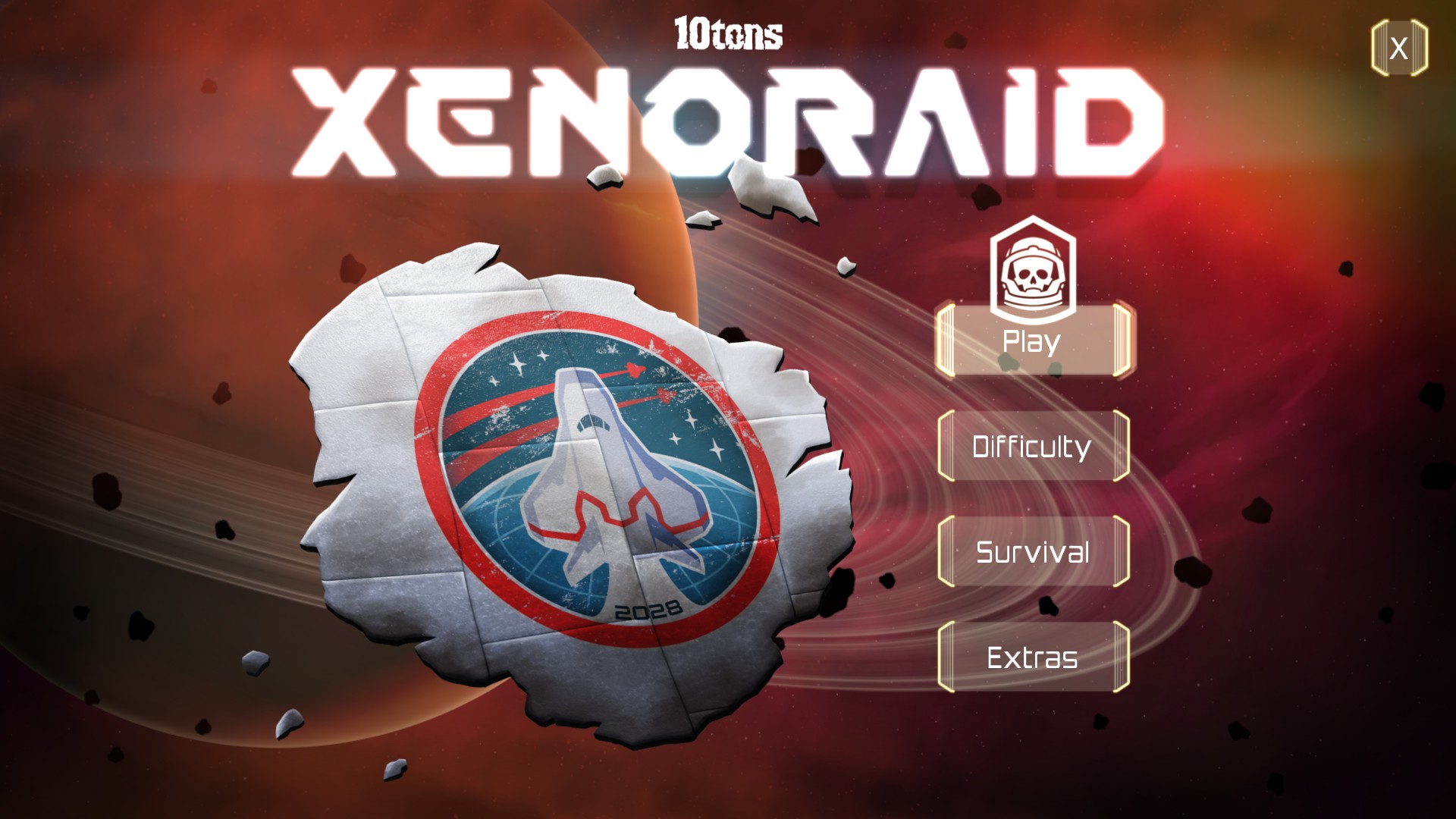 Xenoraid is an interesting beast… certainly different from the usual fare within it’s genre. In many shmup games, the focus really is on dodging more than anything else.  Actually hitting the enemy with your attacks in most games is practically a given, particularly in bullet-hell games.  If they’re in front of you, and if you’re firing, you’ll hit them. Xenoraid, however, moves away from this norm to attempt to create an experience that’s just as much about aiming and shooting as it is about dodging.  However, a few unfortunate missteps prevent this game from going as far as it could.

The game starts off fairly simple, easing the player into the very unique mechanics that they need to learn in order to advance.  The very first thing you’re likely to notice is the controls.  This is no typical shmup with super-precise 8-way directional movement.  These ships have acceleration, inertia, thrust, so moving around isnt always so simple.  In addition, the ships tilt in the direction they are moving.  This means that instead of always firing straight forward as in most other shmups, you can fire at angles too.  This nicely emphasizes the need to actually aim at your targets, and is mostly effortless to control… it’s just a matter of practicing and knowing how your attacks work, and when to fire in order to actually strike your target.  Your main guns have infinite ammo, yet they generate heat when fired.  Overheat, and your weapons lock up, putting you in a very vulnerable position… needless to say, this is to be avoided.  You also have secondary weapons on each ship, ranging from homing missiles to EMP blasts, and all sorts of other things.  Between missions, you can also spend money to upgrade and repair each ship, buy “techs” (universal upgrades that affect the entire squadron), and even sell or buy new ships (though you wont do this often).

The problem that you’re likely to run into, however, is that funky movement that your ships all have.  While the controls themselves are quite responsive… the ships still often seem sluggish, slow to shift direction and get out of the way of oncoming blasts.  In addition, they tend to be big targets for the many bullets that will be flung your way.  Fortunately, you have a unique advantage:  You aren’t piloting a single ship in this game, but instead, you have a squad of four seperate ships.  At any time, hitting one of the face buttons on the controller (if you’re using a controller, which I recommend) will switch out your current ship with one of the other three.  Your current ship sort of lifts off, away from the battlefield almost instantly.  The replacement ship takes a bit of time to get there, and you get an indicator of where it will “land” into the screen, allowing you to properly place it where you want before it becomes vulnerable to attack.  This unique mechanic allows for a special type of dodging, in that if enemy attacks are coming at you in such away where you are sure that your bloated mass of a ship wont be able to move away in time, you can simply hit the button to switch out, “dodging” the attack almost instantly, and effectively allowing you to reposition into a better space on the screen.

Of course, it wouldnt be too interesting if you had all of these advantages and your enemy had nothing.  They have plenty of their own nasty tricks, everything from cloaked fighters to huge battleships that can warp around… tons of ways of making your job tough.  In addition, the behavior of these enemies is dynamic instead of static.  Which is to say, they operate via AI, sending them flying around the screen based on what’s happening, trying to orient towards you in order to fire while at the same time avoiding things like asteroids, or also doing things like putting a shielded side facing you to guard against your attacks.  It’s a far cry from the usual foes in the genre, the sort that tend to just fly in totally straight lines or sit there and get shot.  Each enemy has it’s own unique way of trying to kill you, and the interesting part is that there are often specific ways of countering these.  For example, enemy shields can be brought down with an EMP blast (which also stuns anything caught in it).  A big cluster of homing missiles can deal with a horde of spinning ships that fire in all directions, making it difficult to approach.  A railgun can quickly tear the frontal weapons off of a certain other type of major ship, rendering it much easier to deal with.   Learning how each enemy can attack, and also learning the best ways to counter them, is a particularly interesting part of the game.

However, for all that stuff that this game has going for it, it also at the same time takes quite a few steps backwards.  The biggest issue that stood out to me is that enemy variety is very low.  There just arent all that many enemy types, and they’ll repeat themselves over… and over… and over again.  You’ll quickly tire of the spinning round things that never, ever stop hassling you, because you’ll see them in every single mission.  And there are many missions in each of the 5 major sections of the game, so you can go quite awhile before encountering a new type of enemy.  The game tries to spice things up by adding asteroids to the mix, but this also can prove problematic, as the usual result is simply to slow things down.  Enemies cant fly through asteroids any more than you can, and will always maneuver to avoid them.   This means that you can sometimes spend quite a bit of time simply waiting for a roving group of ships to move into a position where you can actually fight them instead of simply watching them float around.   Missions have differing amounts of asteroids in them, with some having very few, and others having about a gazillion of them.

In addition to the high level of repetition, the game’s story is… forgettable.  It generally feels like what’s going on really just isnt very important, so this aspect of the game doesnt really have any impact on the experience as a whole.  If you’re looking for a game with an interesting story to tell, you’re not going to find that story here.   And the game’s tech and upgrade system, while useful, is a bit formulaic, if that’s the right word.  You typically dont have to think very hard when making choices here.  Some choices are very obvious, things that you pretty much MUST have in order to do well, while others just arent very important at all, or are even downright useless.  With the low amount of content, this is also a very short game.  While that isnt unusual for a shmup, this is one that seems to be trying to be as different as possible, and goes out of it’s way to emphasise it’s tech and upgrade system, yet it feels like it just abruptly ends before it gets REALLY interesting.  There is an unlockable “hard mode”, but it’s just a repetition of the same campaign you just finished, except, well, harder.   There are scored survival modes as well, but these play exactly like any other mission, except for the fact that they just keep piling more and more enemies into the fight until you finally explode.  They’re a cool idea but I found that they honestly dont really add all that much to the rest of the package.

And that, in a nutshell, is Xenoraid, a very unique yet flawed entry into a genre that could do with some shaking up.  I have to say, despite it’s problems, I quite enjoyed my time with it (except for the fight against the third boss, the little snot..) and may come back to it in the future, probably to try out a hard-mode playthrough.  Hardcore shmup fans may honestly be a bit put off by this one… it’s quirky controls, upgrade system, and even just the fact that your ships have health bars might be pushing it a bit too much for some.  But on the other hand, this is a rare entry in the genre where you dont have to already be an expert in order to advance and feel like you’re accomplishing something.  That repetition though… that really hurts this one, regardless of the type of player you are.  However, I still think it’s worth a look, as despite it’s flaws, it really can be just plain fun.