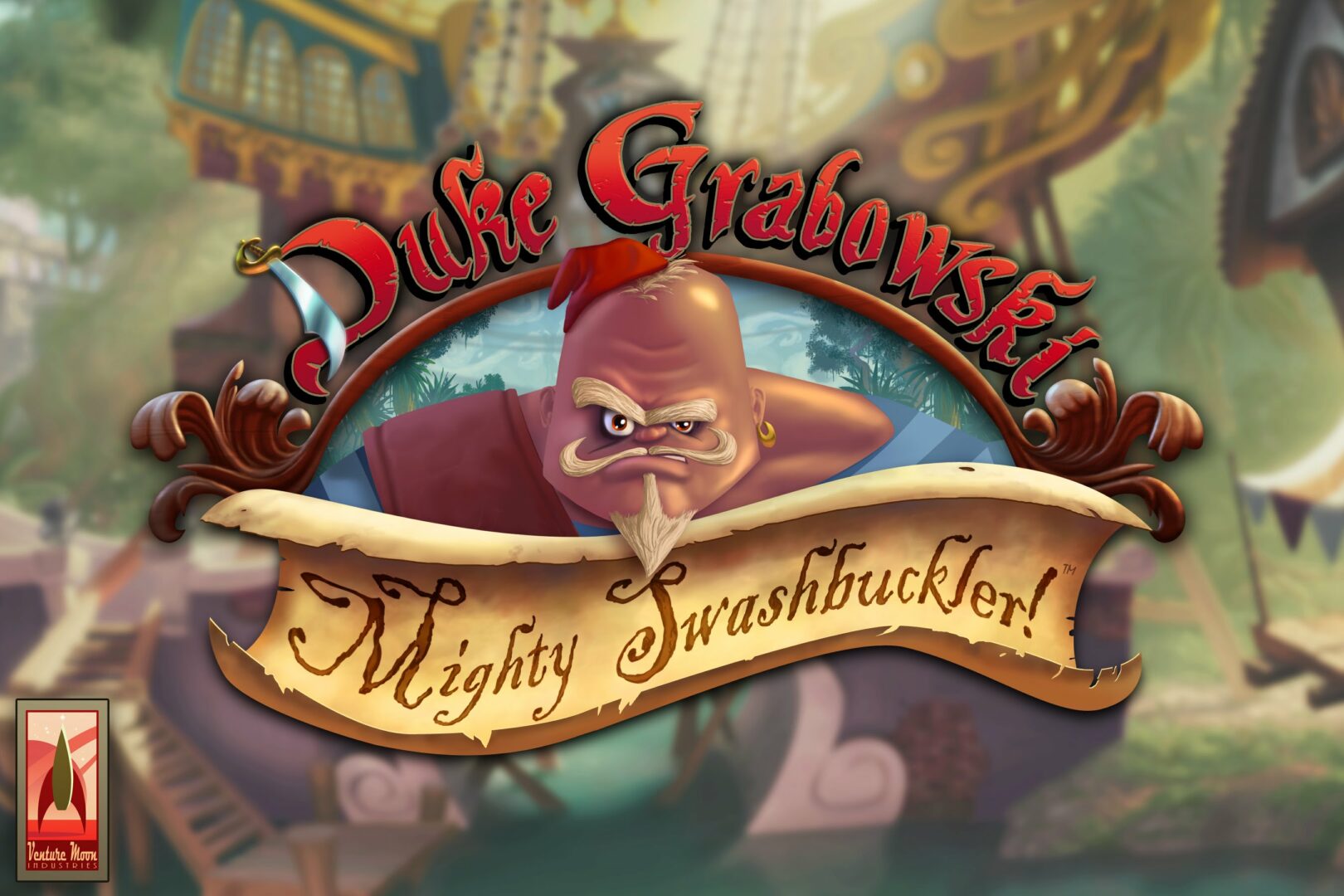 If you think of a comedy point and click adventure game featuring the hapless antics of a rather inept pirate, your first thought may be the Monkey Island games by LucasArts. Well, there’s a new game to pick up that mantle.  Duke Grabowski, Mighty Swashbuckler, a point and click adventure game developed by Venture Moon Industries is doing the same thing. Ram picked with a bizarre cast of sea-bound characters and puzzles with often obscure solutions, means it carries that mantle well, but is it any good? 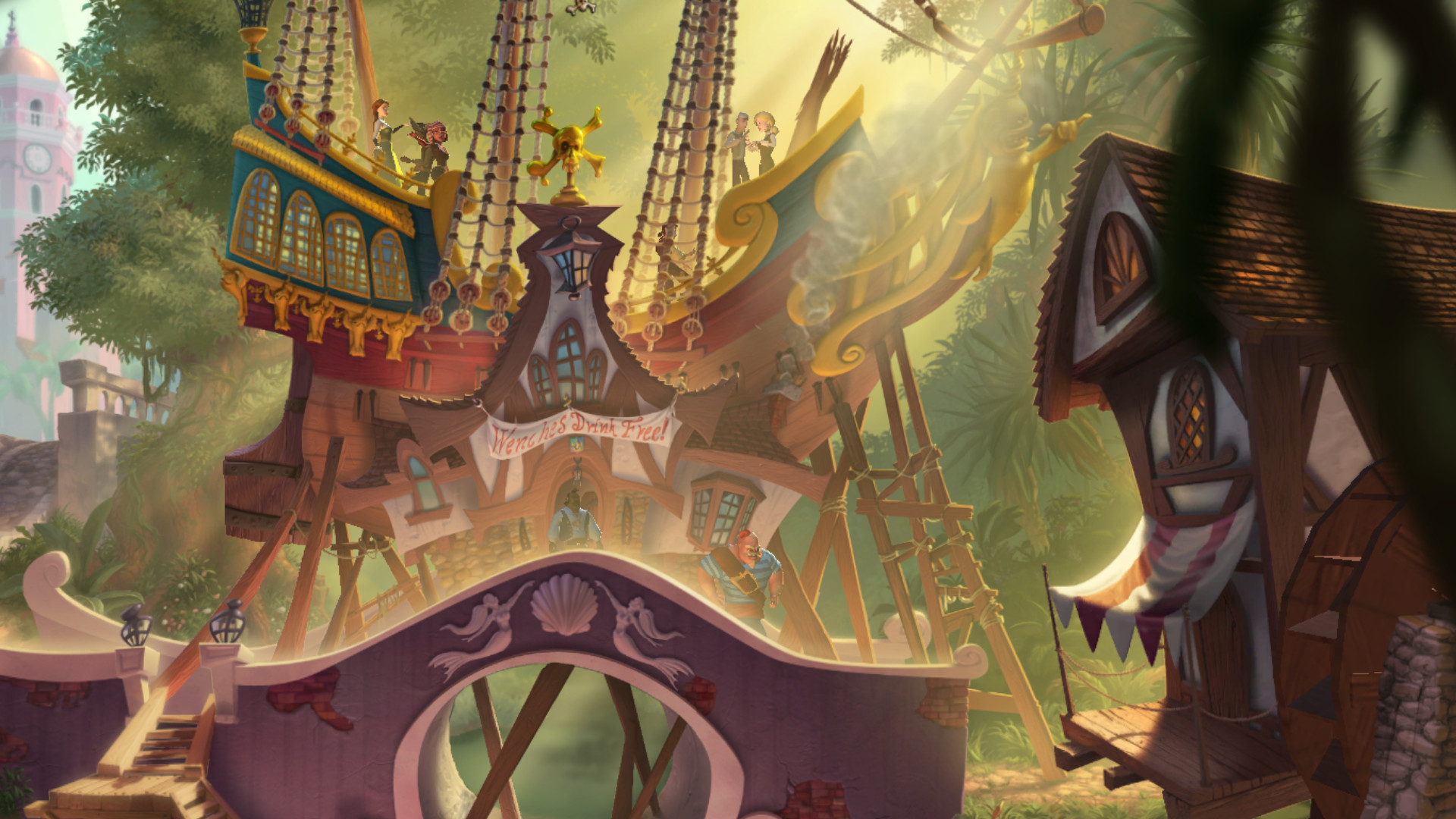 Duke Grabowski, Mighty Swashbuckler tells the tale of the eponymous Duke Grabowski. After the Captain dies the rest of the crew try to decide who the Captain should be. The crew, who are not overly wholesome individuals, decide to vote on who should be the Captain amongst them.

Duke Grabowski, a pirate who you can only assume was hired for his upper body strength rather than his severe lack of smarts wants to be Captain himself, but before the crew could even consider Duke as the Captain he is asked to prove that he would be a good one by completing a variety of tasks. Though, we the audience know that it’s just a way for the other pirates to get rid of him, Duke happily bounces off to shore happy that he will learn everything he needs to know about being a Captain on the mainland. 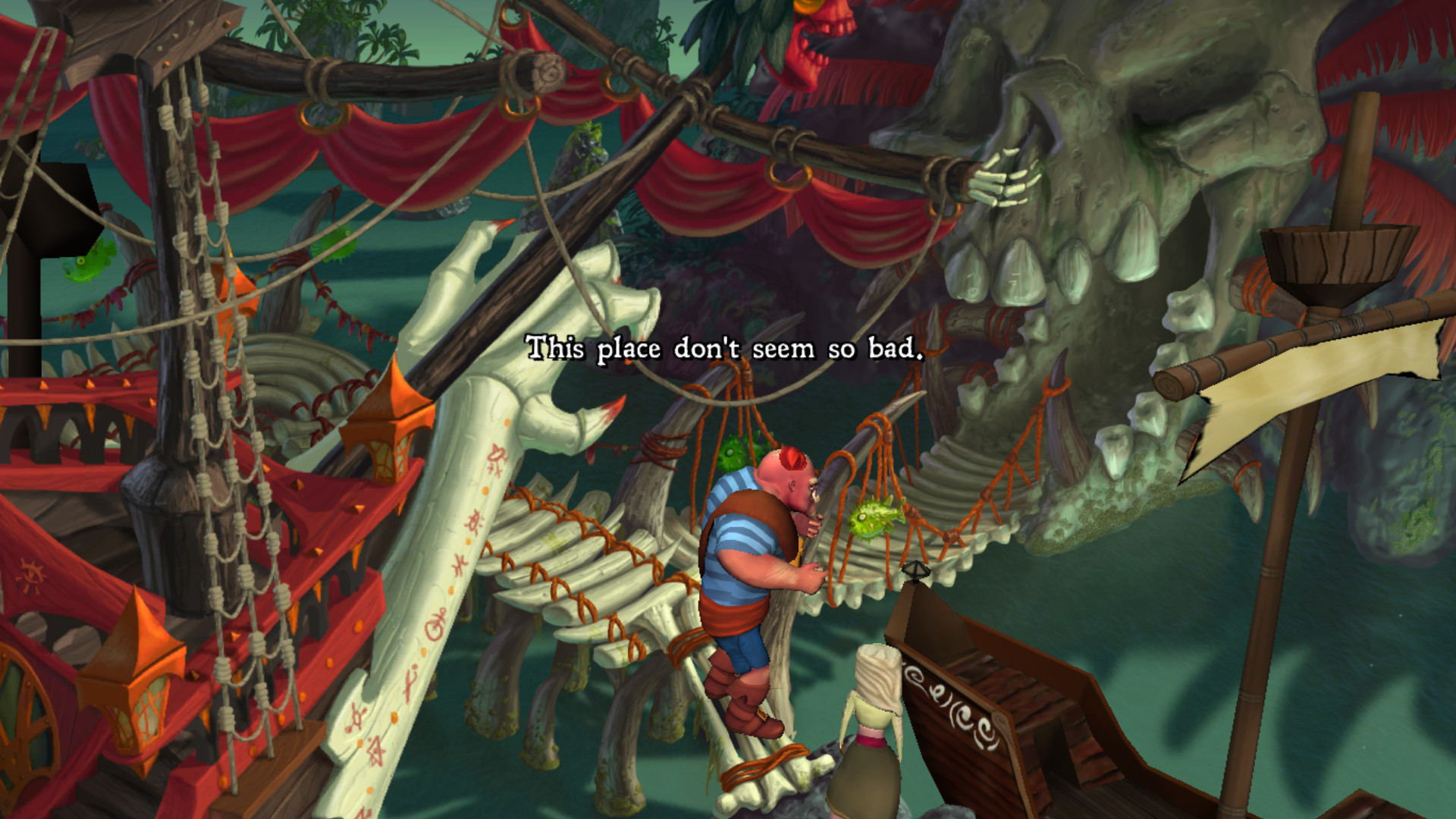 This game plays as you would expect a point and click adventure to play. You move around a variety of colourful screens interacting with both helpful and considerably less helpful characters as you go. Items you pick up can be used or combined to solve the various problems that you’ll face along the way. Interestingly, and because of Duke’s character you generally have three interactions, talk to, look at, and punch.

There are no real surprises in the gameplay, so if you are looking for something other than a standard point & click adventure game, then you might want to go elsewhere.

The game is controlled via a mouse, and there are no difficulties at all with this. You click to tell Duke where to walk, and you click on the various items to interact with them. It’s not a game that needs a complex control method. 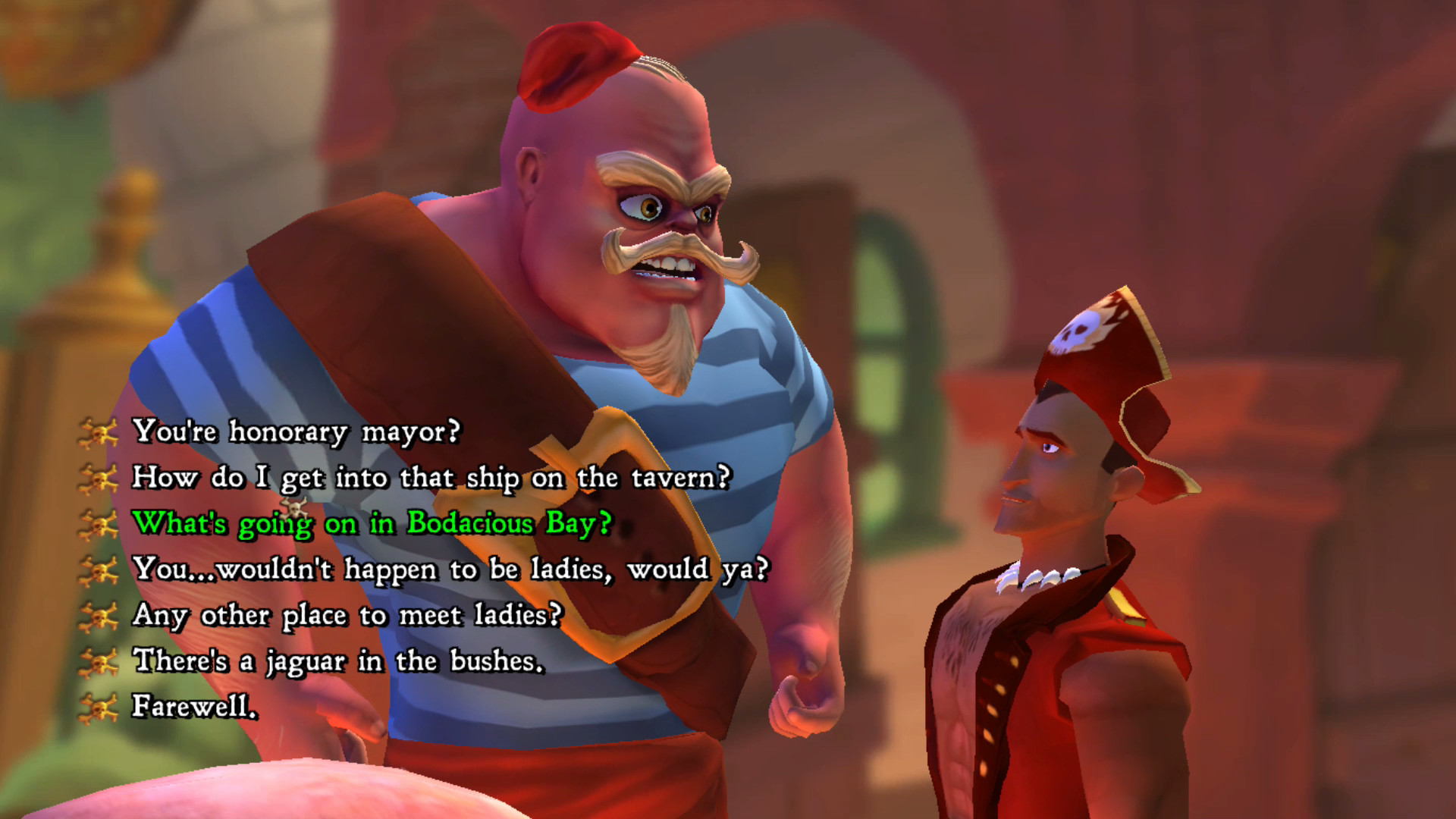 The graphics are nice and remind me of an updated Monkey Island 4. By today’s standards they could probably do with a little more polish as there are a few cases where they look a little off. Having said that, these instances are rare and in the most part the game creates a bright and colourful pirate filled world, full of all manner of pirate stereotypes and bizarre Terry Pratchett-esque jokes.

The puzzles within Duke Grabowksi are not fantastically difficult and all the ones I have come across can be solved with a little bit of logic or at worst trying to use every item in your inventory on every item in the world. Ok, I’m not proud of that approach but it does work. Even without that, you should make progress within the game fairly consistently especially when you start to figure out how the puzzles generally work.

The replayability is where this game lacks a bit for me. Like a lot of puzzle games, once you’ve played through it once, the puzzles hold a lot less sway the next time through. There are no different endings or unlockable items, so unless you truly loved the story and the feel of the game, I can’t imagine you’d go back for another run through. 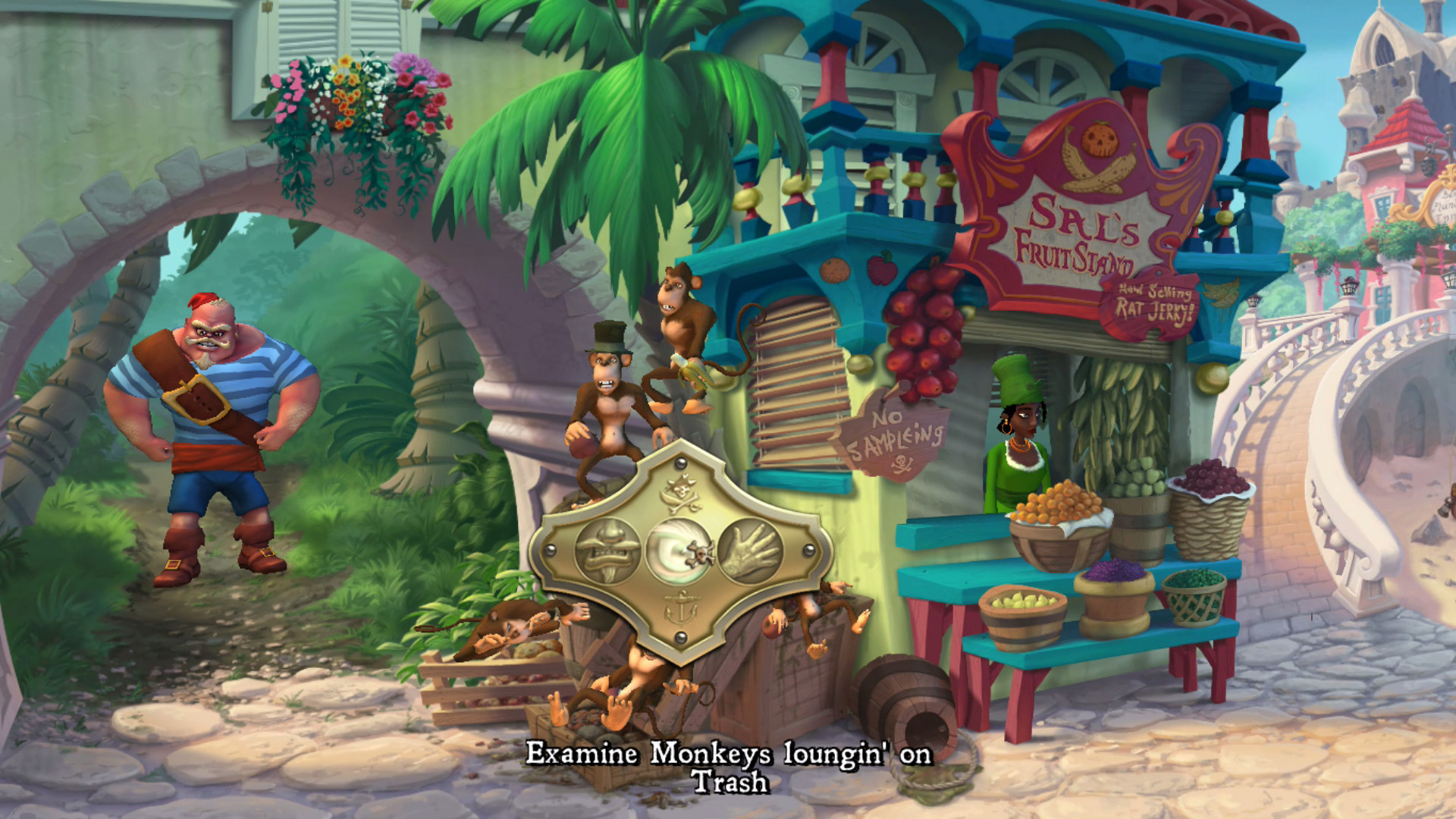 Duke Grabowski, Mighty Swashbuckler is a very pretty pirate point and click adventure, there’s no denying it. Although, there won’t be much chance you’ll play it again once you’ve completed it (It just doesn’t have the monkey Island replay feel) it doesn’t stop it being a very enjoyable adventure on your first run through. The jokes are clever and sometimes a bit tongue-in-cheek, so if you’re looking for a puzzley way to spend a fiver, you could go much more wrong than this.