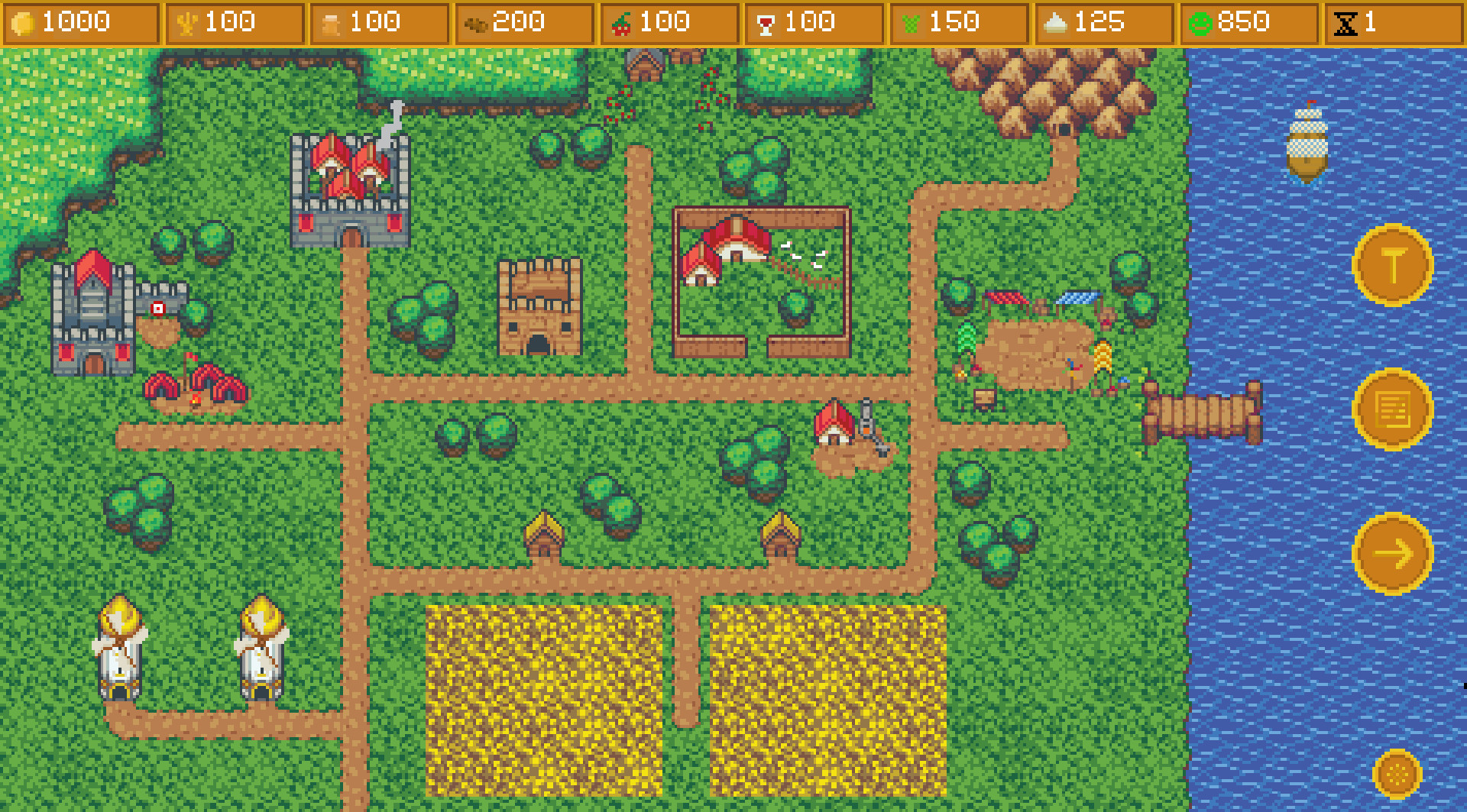 Simulations have become increasingly popular over the years and now include subjects such as dating, survival, wartime management and even janitorial servicing. One of my personal favorites has always been castle sims made popular by classics such as Stronghold and Lord of the Realm. Bad Byte’s new strategy game, Survival Kingdom, takes a simpler approach and allows the player to manage existing buildings and enlist soldiers as the game simulates the outcome. It is surprisingly difficult in the beginning, but can quickly turn monotonous as the years go on. This monotony mixed with rudimentary mechanics makes the game incredibly boring at times, but is it enough to damn this nation to the orcs?

The story revolves around a flourishing nation that is brought to its’ knees by a terrible invasion. Orcs suddenly appear and wipe out the nation with just a few lucky citizens able to flee. It is up to the player to rebuild the fallen nation and maintain an effective army to fend off the growing threat of Orc invasion. If the player manages to survive the random attacks and fluctuating population for a 100 years, then the orcs can be successfully wiped out and a couple of possible endings will be revealed. Allow a Orc formation to wipe out the standing army, and defeat is the player’s reward, forcing a few lucky survivors to flee and try once more.

The best way to describe the visual style would be to call it simple. Everything from the town map, character sprites and event pictures is pixellated with very little animation. Windmill blades spin, sheep move around in their pasture and units move across the battlefield, but that is about it. Most of the pages used during the town phase are text oriented and make for a clean and organized UI. Music is limited with a single track used for the town map that gets extremely repetitive. I cannot recall a single sound effect either, which is why I suggest bringing a preferred soundtrack to compensate for the lack of variety. It might be simple, but it is functional with no noticeable graphical issues.

Combat can occur either from a random event or the inevitable Orc attacks. The only impacting factors are the size of the army, the unit types and the type of battlefield. Soldiers have higher defense, cavalry prioritize ranged units and the ranged units can attack while using soldiers for protection. This plays into the battlefield selection as each area has different terrain features that affect projectile range and also allow bottlenecking to prevent cavalry from reaching the ranged units. It is completely automated and all the number crunching happens in the background while a quick animation plays on-screen. If the army succeeds, the casualties and equipment usage will be listed along with the number of soldiers saved from the use of armor. While event battles remain static in difficulty, the Orc invasion forces grow overtime and attack without warning (except for a few cases when the Jester provides a warning). Early game these attacks can lead to a swift defeat, making it paramount to utilize the economy to ensure proper stock of armor and units.

Gold is required to upgrade buildings that produce goods, food and utilities needed to ensure a healthy population. On the other hand, popularity determines the rate the population can grow and will fluctuate depending on the method used to obtain gold. Selling goods at the market is the main way to make gold with little popularity lose as long as the other buildings can keep up production. Taxes can be implemented to generate gold per year, but it can severely damage popularity gain and influences citizens to turn to crime. Once criminals are thrown in jail, they can be enslaved to generate gold at the cost of further popularity gain. It is a simple cycle of acquiring gold and popularity management that will ensure a population large enough to sustain a growing army.

A couple of other functions exist in the game that provide bonuses to make the balancing act somewhat easier. Faith and hygiene influence popularity and can be increased by upgrading the temple and sewers respectively. Three laws are available from the start and can be enacted or revoked once a turn. These laws provide a bonus to hygiene, raise the total enlistment capacity and also reduce the number of possible casualties during a fight. Monuments take at least twenty turns to build and provide special bonuses to either population growth, increasing market prices or combat effectiveness as long as proper sacrifices are bestowed. Random events can also occur that do not require the player to fight, instead granting opportunities that can either grant free upgrades, increased popularity or reward trade goods. As long as the player invests in these measures early on, they will be available for use during the mid to late game and make the final years tolerable.

Strategy is a broad genre that can include something as complex as Europa Universalis 4 to something as  minimalistic as this title. The game is a very basic civilization management simulation that never evolves in terms of gameplay. For 100 turns, the player is upgrading buildings, selling items and balancing an army to fight back against an ever-increasing threat with little interaction. The randomness of the attacks and events make it possible to be wiped out in the first five turns or to flourish to the end, which can make it difficult due entirely to random number generation. Survival Kingdom feels like a game one would play in the background; something simple to switch back too while playing an MMO or watching a movie. It has multiple endings with several achievements to give a reason for the player to return, but the shallow gameplay makes it very hard for me to recommend it. It is not an awful game; just not a compelling or enjoyable one.