Halloween is upon us, and the game developers are unleashing hordes of evil horror games to trap our souls during the festivities. Exceptionally this year, many of those games are multi-player. Among them, White Noise 2 is being released on Early Access today. How is it gonna be, trick or treat?

Type: Single-player, Multi-player up to 4v1

In 2012, a game called Slender capitalized on the PC YouTube & Horror frenzy launched by the unholy combination of Amnesia: The Dark Descent and Pewdiepie. Unlike Amnesia, Slender was devoid of any narrative or level progression; there was one map in a forest, eight notes to find, and one monster (the Slenderman) lurking around. Jump scares were guaranteed, and just like for the Roguelite games you could see YouTubers trying their chance until their run ended in their screaming demise. 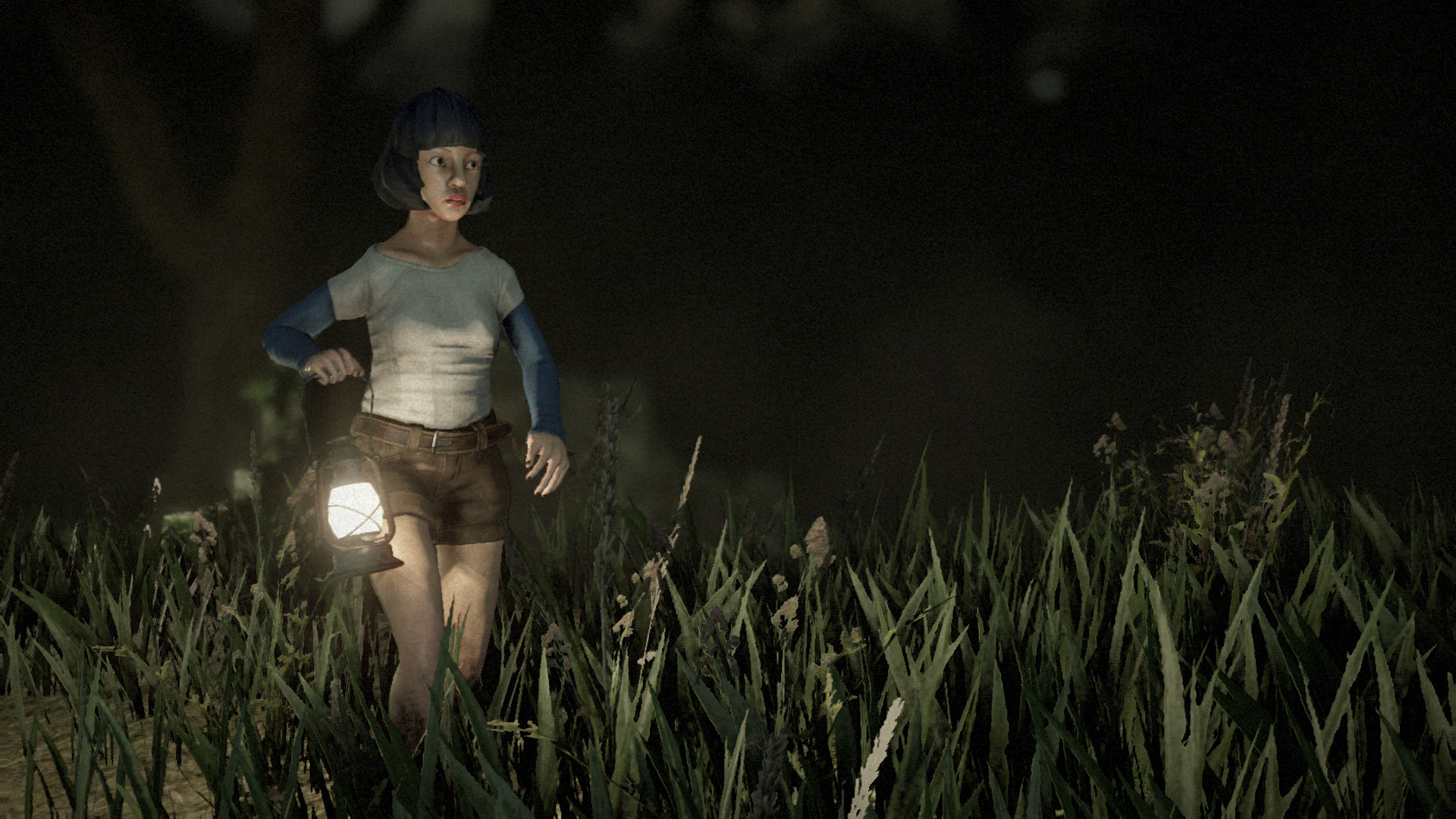 White Noise 2 borrows from the same formula as Slender. The player has 8 tapes to find in random locations (refreshed each time the game is started), one lurking monster to avoid but two different big maps (not procedurally generated as far as I am aware). There is an abandoned hospital and a forest area with ruins. A compass can point in the direction of the next tape, however it will not do your job for you as it takes a little bit of time to recharge after use, and also because it will not help anymore when in the close vicinity of a tape. From then on, seeking the item has to be played by ears as a disturbing static comes from the tapes.

There are other creepy sounds everywhere in the hospital. Banging doors (by the way, doors cannot be closed or opened), bags containing some unknown residuals that seem to attract throngs of flies, power generators and their loud whirring, and so on. The atmosphere is very oppressive, even if your trusted flashlight is there to illuminate your surroundings. You can only see a few meters ahead of you, unsure of what lies ahead. The battery can last quite a while, but you might have to take the risk to stop for a recharge lying on the map. And then you are forcefully turned around by an ugly abomination, game over. 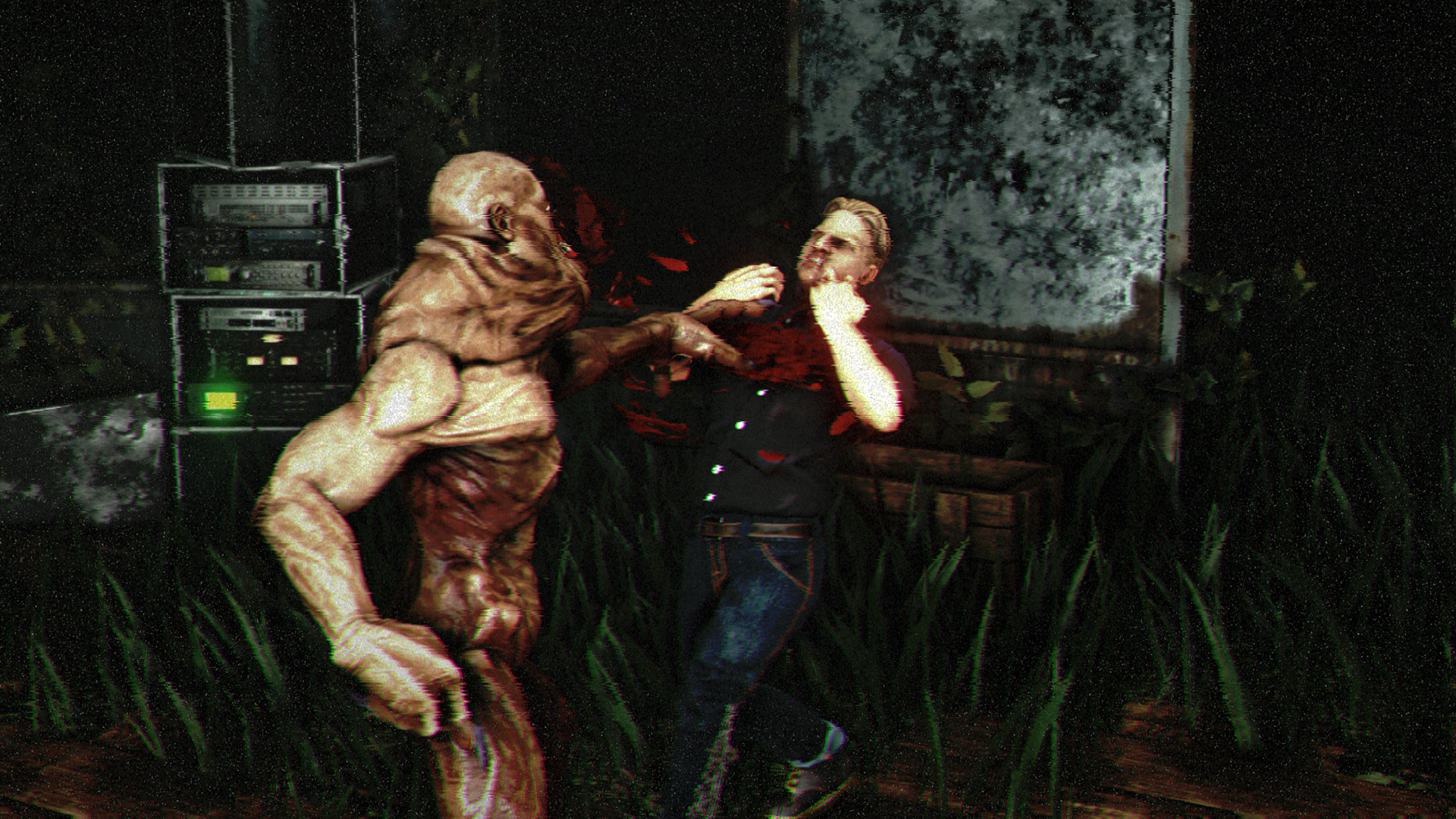 The monster can be chased away by light. There are also light sticks to throw that will stall him. After too much exposure, he will vanish and appear somewhere else. Besides being taken by surprise, the difficulty is that looking at the monster will render the human character insane enough to stop using the flashlight. So basically, chasing the monster away is also risking a game over, which makes for an interesting moment of tension.

Until now, what we have seen is mostly a polished take on the Slender formula. Where this game sets itself apart, is in the addition of an asymmetrical multi-player component that can go up to four human players versus one monster. Yes, you can play the monster and scare your friends.

The monster has a range of different powers that take some time to recharge. He has his own compass, a speed boost, the ability to temporarily turn off the flashlights, and most interestingly a fake tape to lure the human players. However, playing the monster is not as easy as it would seem. By the time the monster gets a location on the humans, they are already moving away. Thus the developers have balanced it with the addition of idols, monstrous pillars that the monster can activate in pre-determined spots. If a human player walks nearby, the idol will be triggered and complain about vocabulary… wait, no. It will alert the monster. If the monster is too far away, there is a teleport button to get closer but not too close. Despite all these tracking helps, it can be difficult for the monster to find his way in the labyrinth that is the hospital. The forest is a bit easier to navigate, even though I have had occurrences where the monster just wanders in one part of the map while the human player was on the other side and they only met towards the end. Everything looks too much the same. Even worse, sometimes the hunter can feel as the prey since being caught by a flashlight in the open can force the monster to vanish somewhere else and suffer the trouble of finding the humans again. In the end, playing the monster was not so empowering or as fun as I thought it would be. 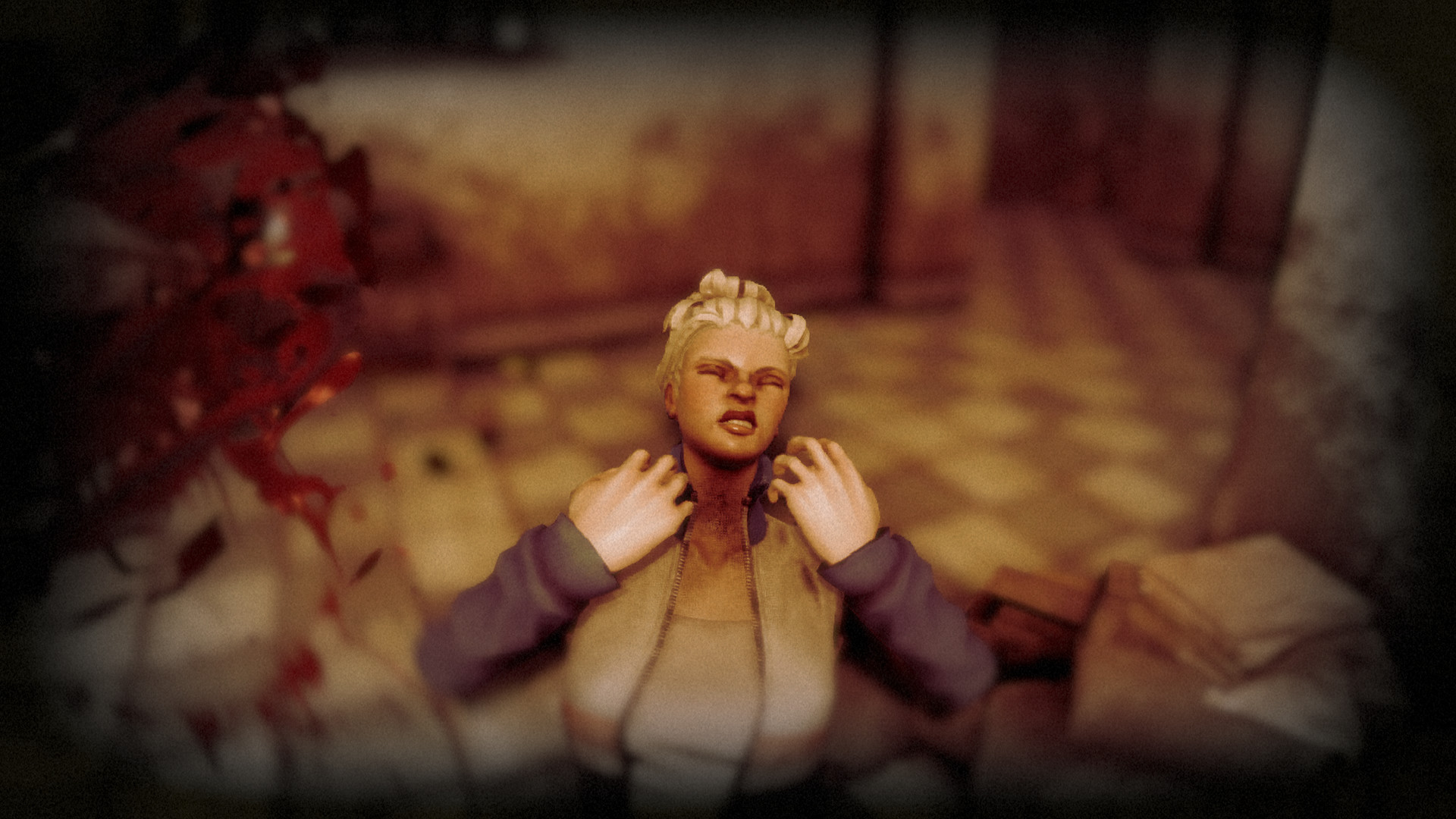 The options menu is quite exemplary for an indie game, with plenty of graphic options and the possibility to rebind every single key. The game is also compatible with controllers. The only usual feature that could be said to be missing is the Field of View, but it makes sense not to let the player choose it in a horror game that relies on low visibility. The graphics are quite nice, just a little bit of clipping in the lower settings but otherwise it looks good, especially the monsters and idols that are properly disgusting. The humans look like they are carved versions of comic book characters, and if the monster was not there to strangle them I would slap them myself.

The longevity of the game can vary; it can certainly be finished in solo within a few hours max. Multi-player with friends would be the way to prolong the experience, even though you would again have your fill within a few hours. The game seems to understand it, as there is a progression system with characters and flashlights to unlock (with each different stats) and everything can be obtained… within a few hours. Accordingly, the Early Access is released in the lower price range for indie games as it costs around $8/8€.

As I mentioned earlier, there are other horror multiplayer games coming out. Let’s see if they are all positionned with the same target. Dead by Daylight is a much more competitive and violent experience. Also, the game is quite successful so there are no problems finding other players. However, it is not very scary. Hide and Shriek that I have yet to test, is one on one only, which limits its scope. It does not have singe-player either. So where does that leave us for White Noise 2? 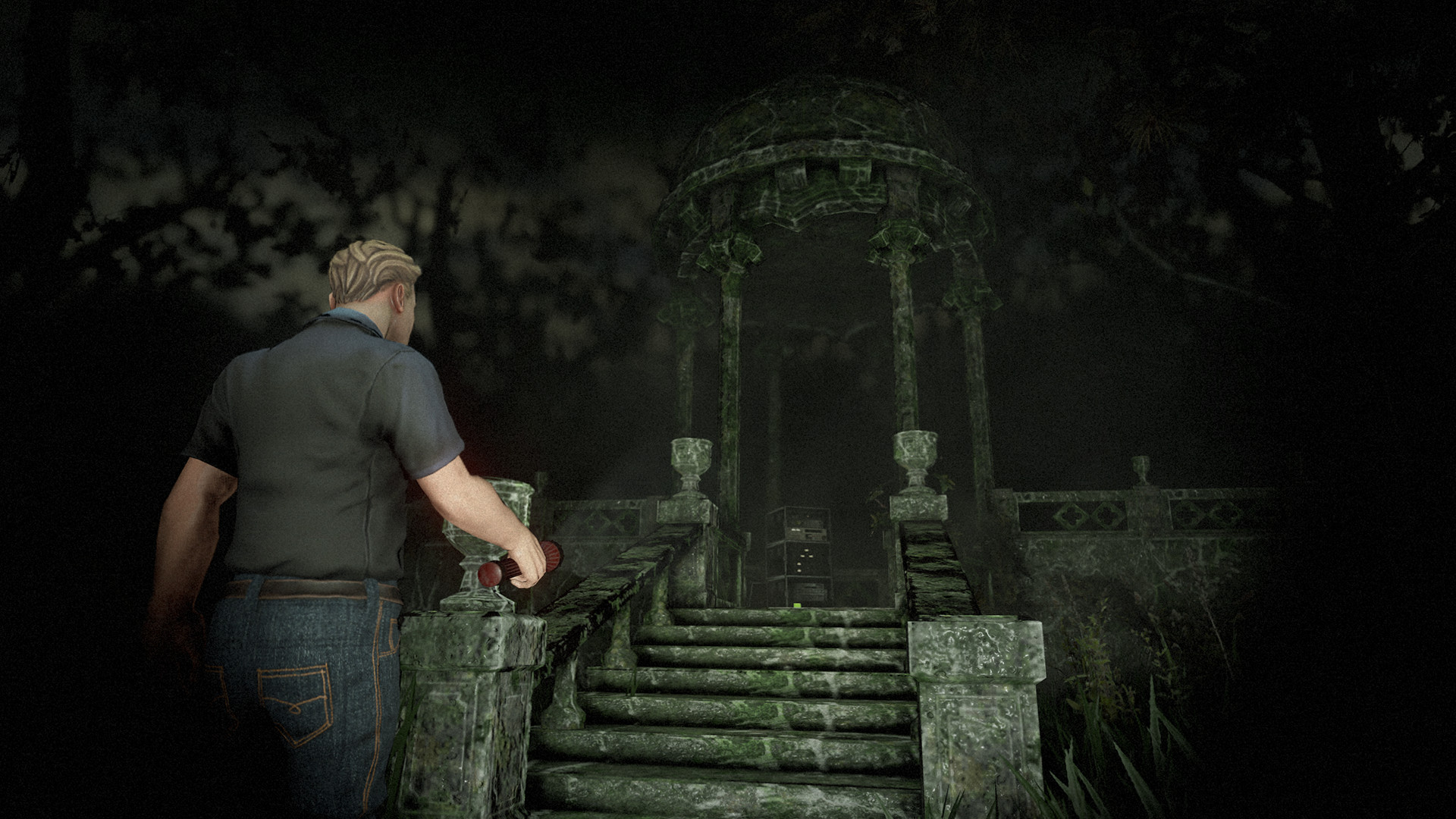 White Noise 2 does not break new ground. No fancy story, nor crazy powers to boost the monster such as climbing on walls or pouncing. Still, unlike many other games it has the huge advantage to give the choice to be played either in single-player or multi-player. And even though it does not stir too far away from the Slender formula, it streamlines the experience for a more balanced gameplay and in bigger maps. Less gory and competitive than other multi-player games, but perhaps more prone to sudden jump scares, it is thus probably more appealing to the younger audience. White Noise 2 is much more focused on having a slow, tense pace, and the importance of positioning both for the humans and the monster. A treat for those who are looking forward to a game of cat and mouse with a monster, be it a friend or an AI. Slender but done better, also with multi-player… and that’s about it. What I would like to see improved during Early Access would be maps that are easier to read, and maybe the ability for the monster to ignore obstacles even if it means only temporarily clipping through walls.

Please note that the screenshots above are those provided by Steam, however the game is played exclusively in first person as you can see in the video or on a screenshot I took myself right under here. Here is a video of the single-player:

REVIEW: Smile For Me

REVIEW: Pathfinder: Wrath of the Righteous