I remember when the first game development tycoon was released and after it, everyone tried to copy it. Now, we have few this kind types of games and I can only tell two that are good. One of them is of course Mad Games Tycoon. 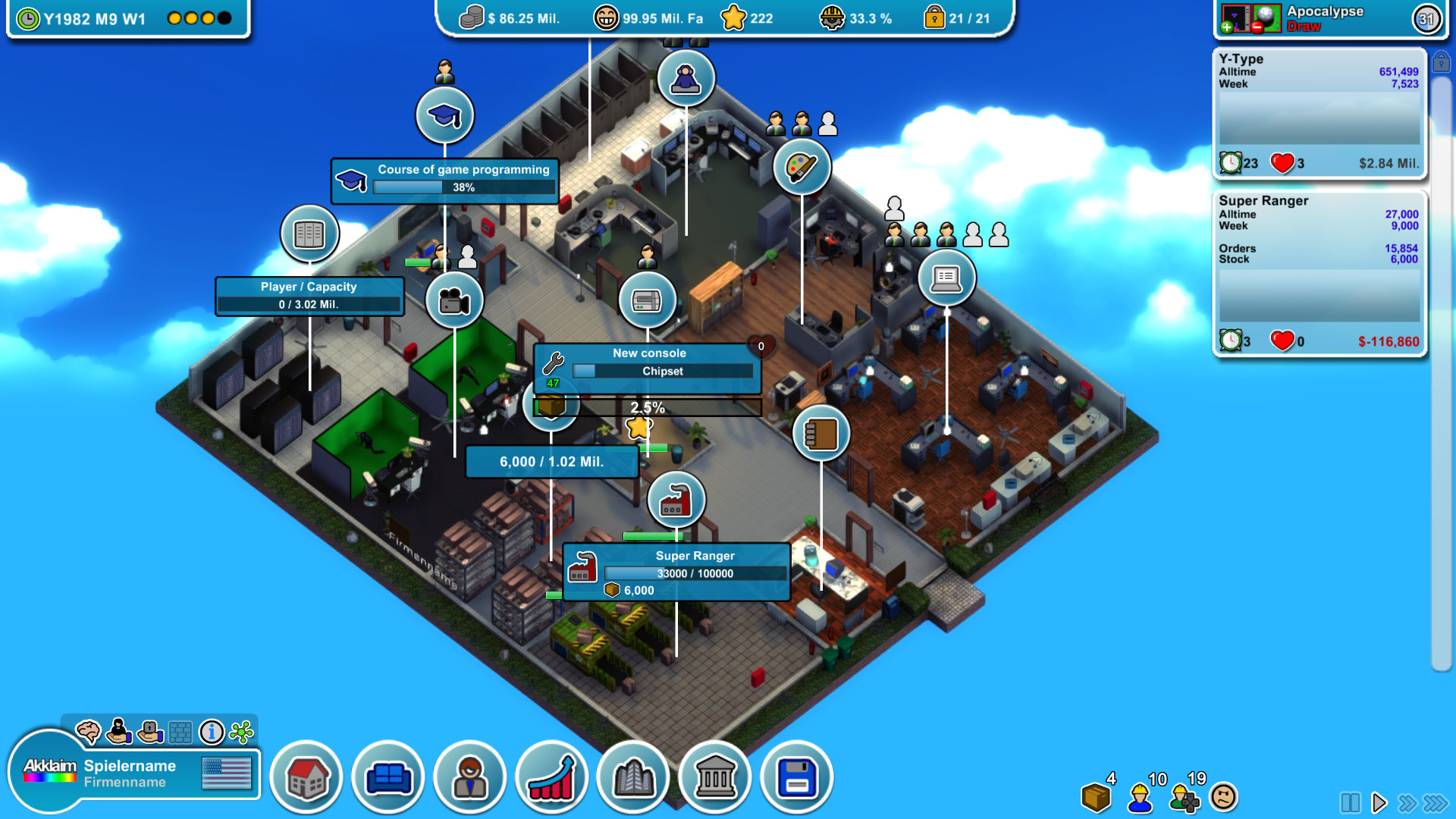 Mad Games Tycoon is very detailed game, at least more detailed than some other games in the genre. When you start the new game, you need to write your name, company name, choose your logo, country where you will start, gender and set up your own gameplay setting. There are a lot of logos to choose from, too bad there isn’t an option to add your own logo. Choosing the country doesn’t really have such an effect on the game, because each country will give you +5% for unique genre. In the gameplay settings, you can change few things, like disable tutorial, start with small office building etc. After that, you will need to spend 5 points on one of the skills: game designing, programming, graphics, music & sound, office work, speed, work will, also you can choose your own special feature and special genre. I guess you will be developing better games in RTS genre than in FPS genre and you will be doing better job with games that have splitscreen multiplayer than those without it. Before starting the game, you need to choose game speed, year of start and difficulty of the game. 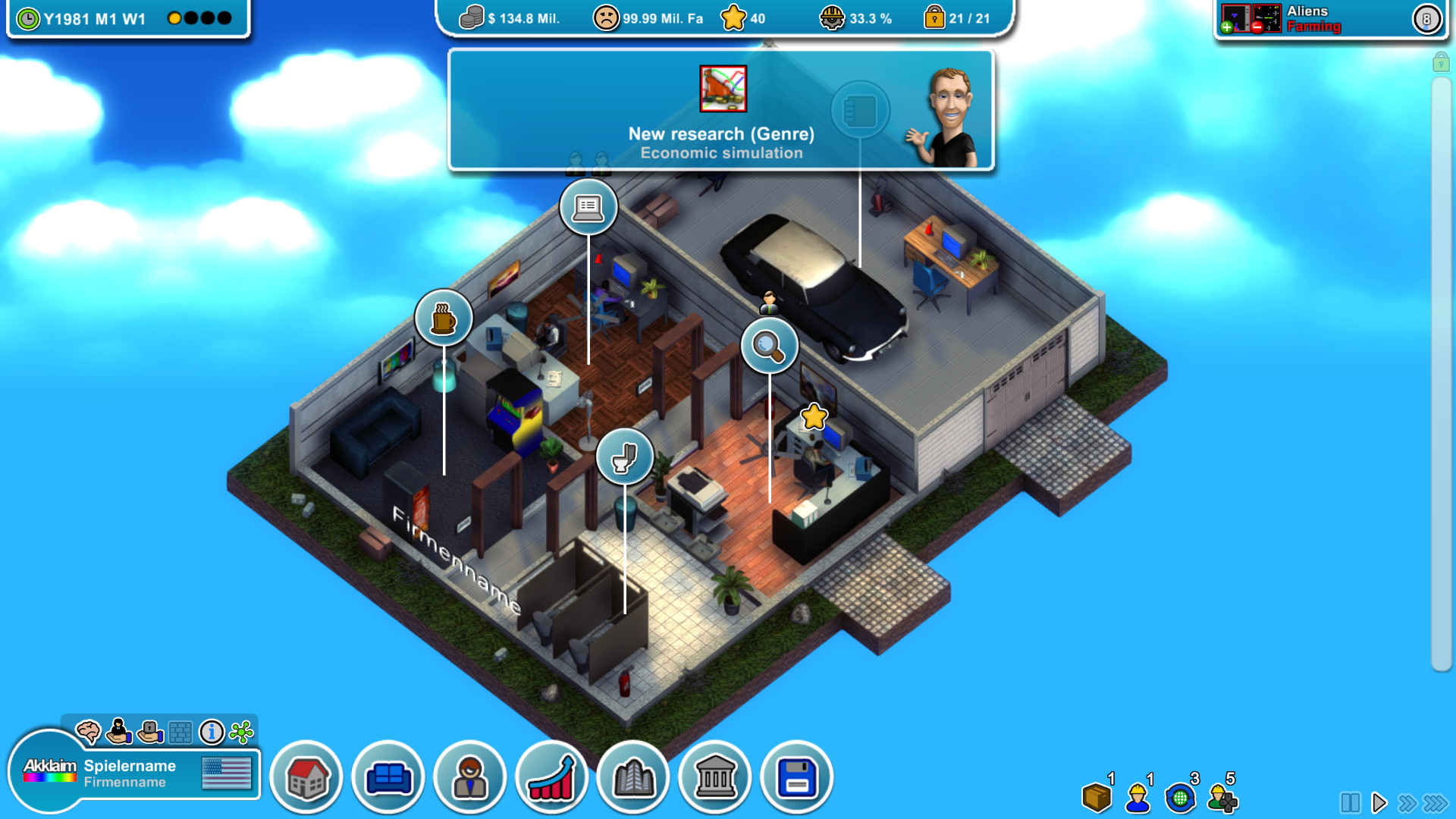 I wrote above paragraph of 200 words, just about how to start the game. I already said that this game is very detail and full of the content. Everytime you start a new game, you will get a small building with a garage. The space is so small and you will need to be carefull how you will organise it. What makes Mad Games Tycoon a little bit different from other games is that you need to define the space for development room, head office, toilet and other rooms. One thing that is not possible or I don’t know how to do it is to demolish the room and reshape it, because sometimes you unlock a new room and if you don’t have the space and plus you don’t have money to buy bigger building, you are in trouble. After organising your rooms, you need to put some stuff in it, otherwise your staff will not be able to sit, to develop the games or do some other things important for your company. Items are divided in few categories, depending what do you need. For development room you will need desks, right? Also you will need some plants, trash cans, water cooler etc. Mad Games Tycoon isn’t just about developing games, it’s about how to run a company, how to keep staff motivated, happy. Later in the game you will have an option to build a training room and train your staff to be better at programming, game designing or something else. 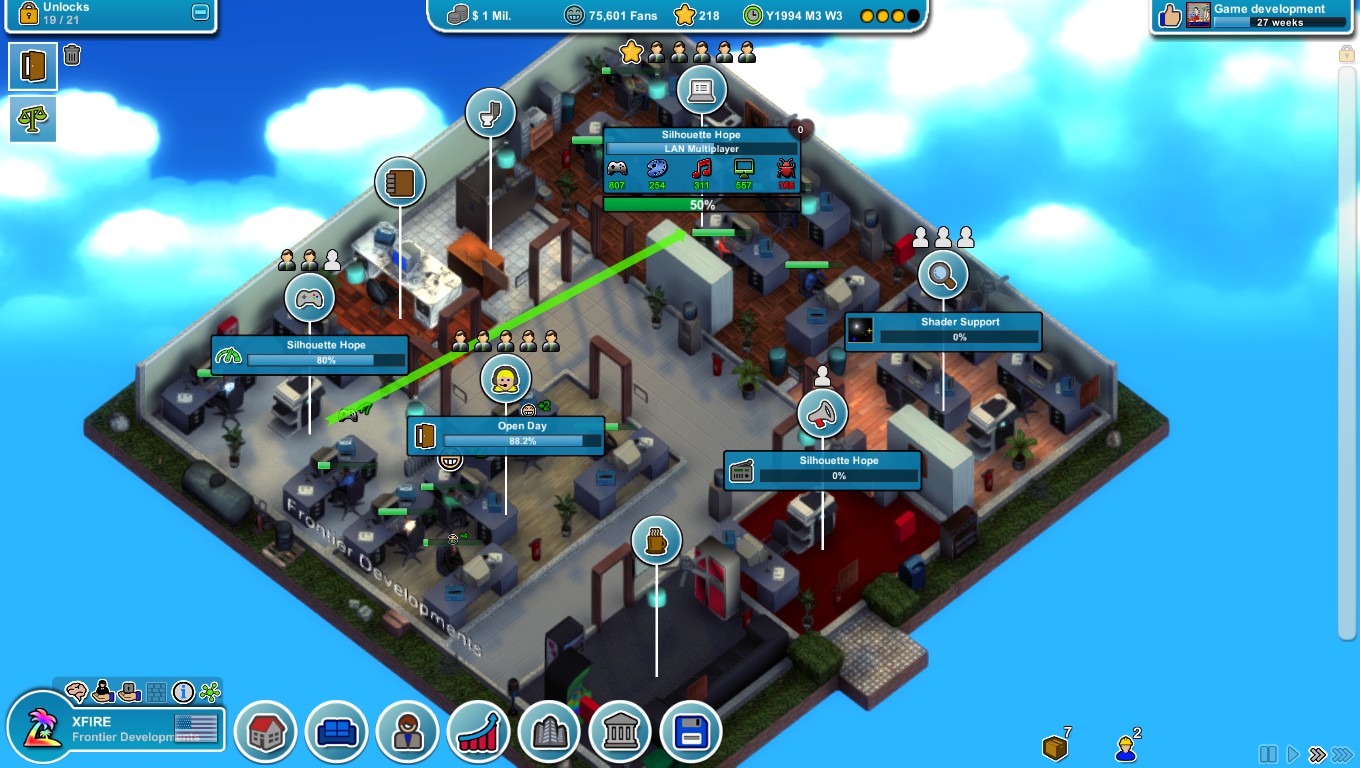 Hiring staff is easy and as the game progress you will need more and more staff, also you will need bigger rooms, more items in the room and in the end you will need a lot of money, so be careful with hiring staff, because sometimes too much can kill your company. Try developing games with a slow pace, my tip for you guys is to first play few games, only to experiment with the game and when you learn everything, you can start your first real and serious game. To make your company much better, keep up with the statistic. See which genres are in the trend, which platforms have the most market share, how are you finances, are you spending more money than earning? This game is very detail and you need to take a look of every aspect in the game, if you want to be successful. After playing this game for more than 2 hours, I still suck, it’s very hard and difficult to keep up with everything. Which genres/themes are IN, what are new features available to research, when is the right time to develop your own game. It’s especially hard when you are starting in 1980s. but it’s more fun to start in 1980s, because you can see how the games were made before and how hard it was to run company in those days. 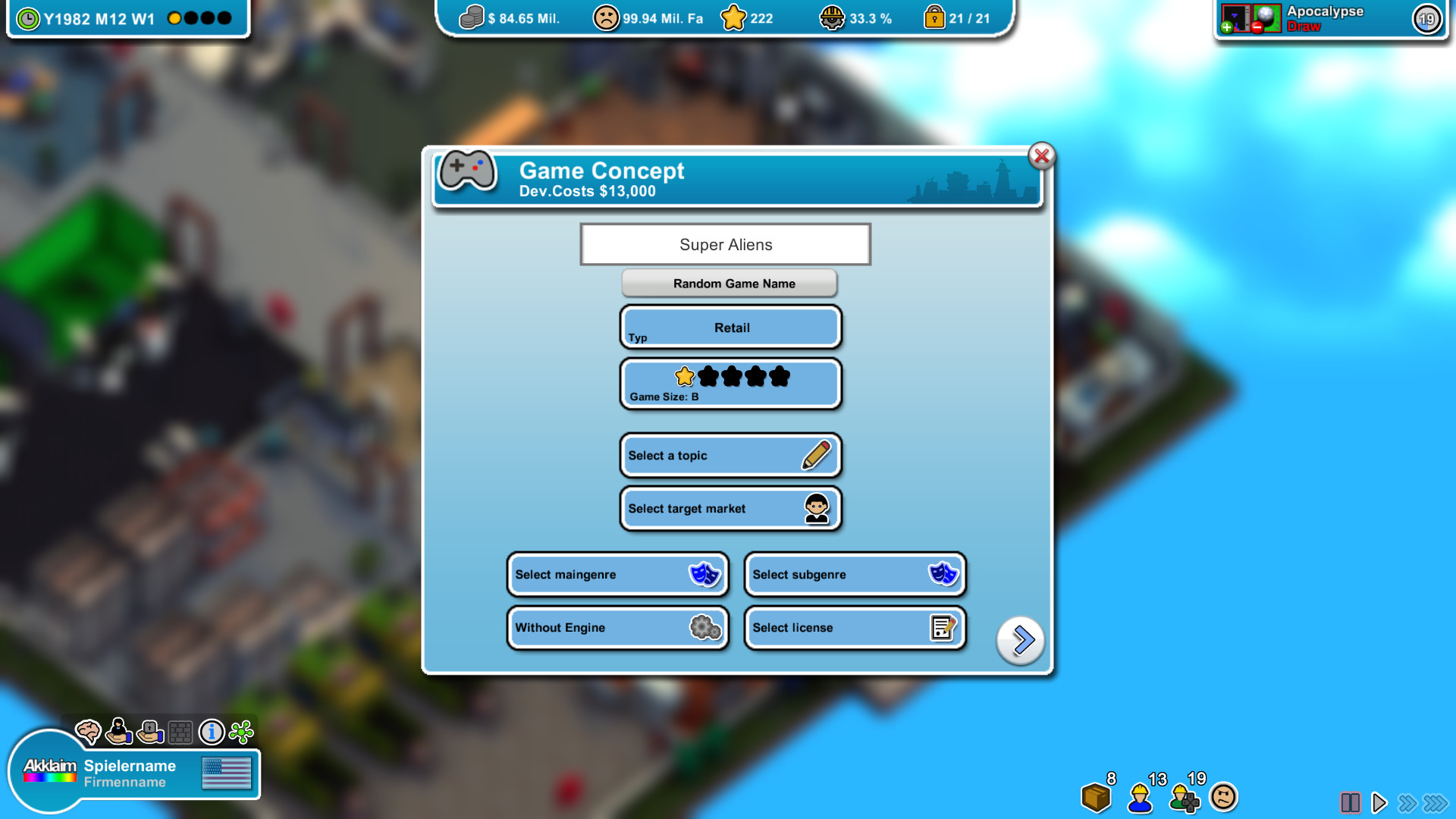 Now that you have game set up, you decided which rooms will you have and what item you will have in those rooms. You are ready to develop your first game and begin the quest to become the best game developer, although that’s not all what will you doing. This game is very detailed and beside developing your own games, you are able to develop games of other publishers, make your own production of the game, be a publisher, develop and sell your own game engines and many more options.I haven’t play Game Dev Tycoon in a long time, but I don’t remember that game having so many options as Mad Games Tycoon. Of course when you start the game in 1980, you will not have a lot of options, your first games will be text-based, a little bit later you will unlock the first primitive 2D graphics etc. If you are succesful game developer, you will earn more money, meaning you will be able to employ more people, build more rooms and buy better items. If you know how to run the company and you have experience with let’s say business simulation games, you shouldn’t have problems with this game. I can write so much about this game, but I don’t like reading long reviews and so I try to keep my reviews not so long. This game can be complicated, but then again, it also can be very simple. This game is for both hardcore and casual gamers. I consider myself somewhere in the middle, maybe more on casual side and because of that I am having fun with this game, even in most of my saves (attempts) I wasn’t so succesful, but developing games, experimenting with genres, themes and other, keeps me playing this game and I can’t stop it. 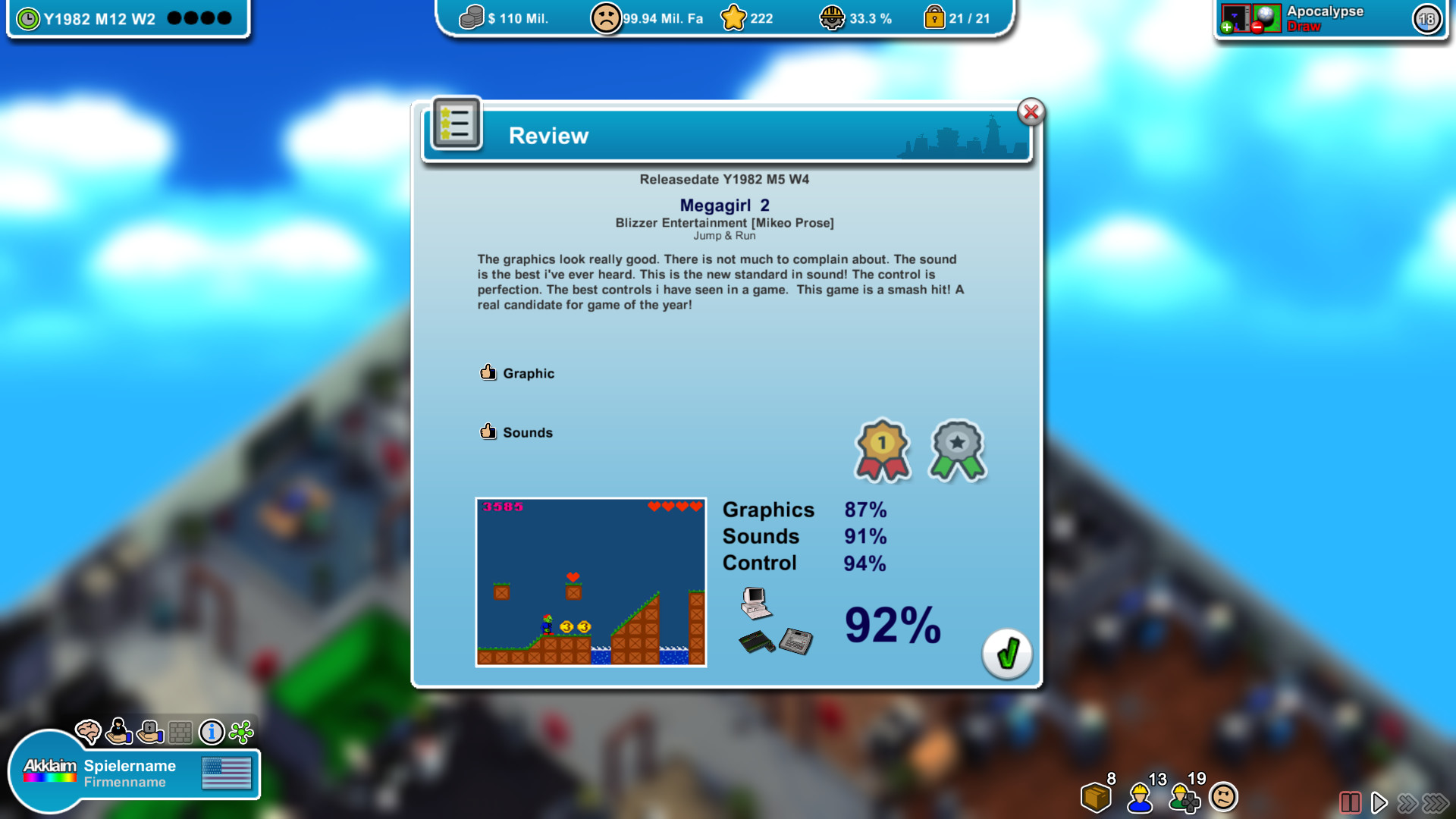 This game is a true indie game, and to describe this game at it’s best is that this game is best played after playing some AAA titles. With this game you can rest your brain, nerves. You shouldn’t have problems with this game and what’s the most important thing, you shouldn’t frustrate in this game. As I already said, try to experiment in your first saves, see what works the best and then try to play your “serious” save. Don’t rush, play smart. I really recommend this game to anyone, because I don’t see why one hardcore gamer wouldn’t at least try it. As you play more and progress more, game gets complicated, but yet, it gets simpler. I hope that whoever read this review will know what I am talking about. For the current price of €15 you will get a lot of hours of fun.