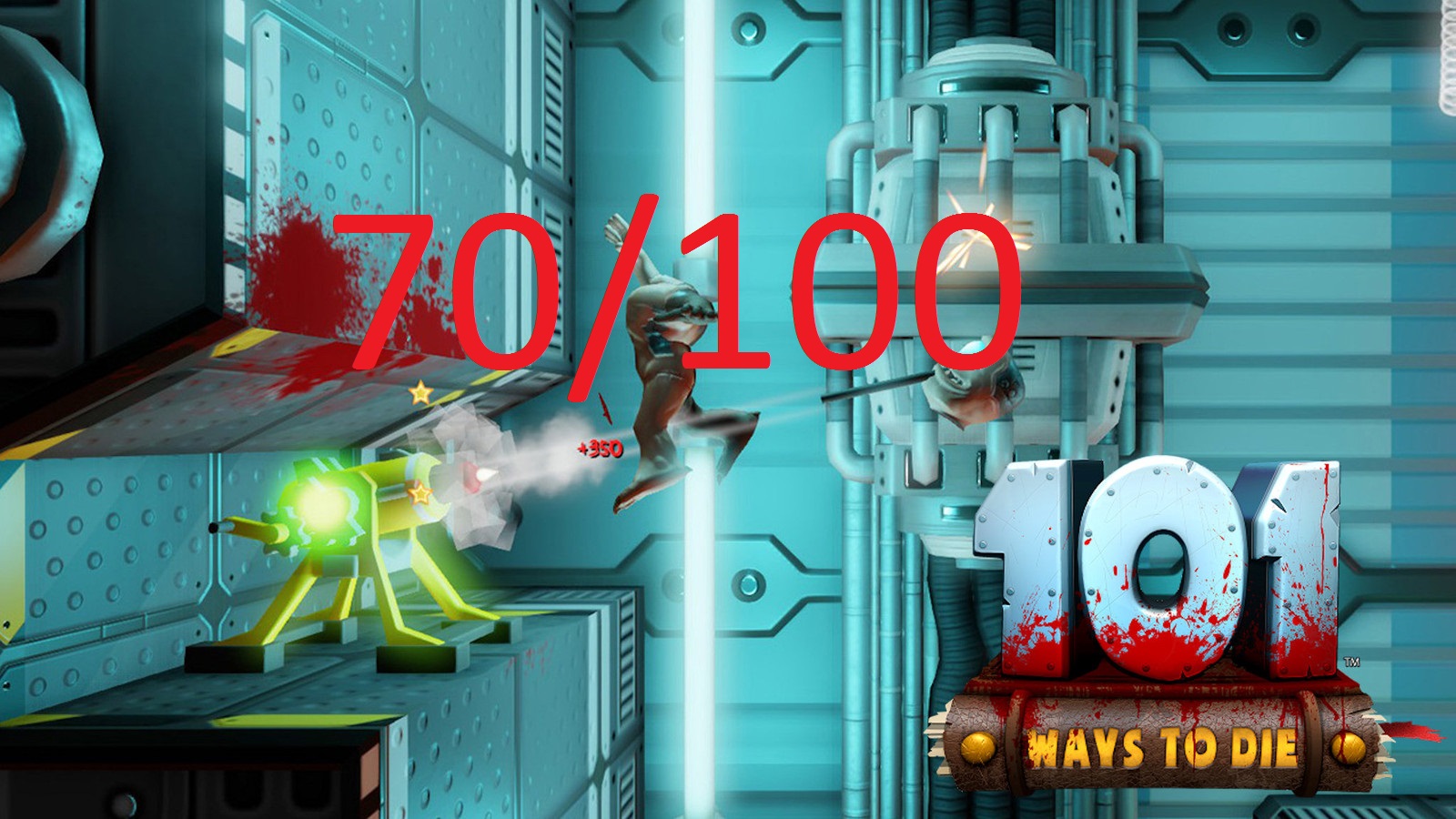 In 101 Ways to Die you play the assistant to Professor Splattunfuder, a genius inventor with a slightly tenuous grip on his sanity who has devoted his entire life to thinking up ingenious ways to kill his enemies, putting them all into one tome called ‘101 Ways to Die’.

However, after one unfortunate lab accident the book is completely destroyed and the professor’s life work is completely gone. So, it’s up to you, the professor, a large arsenal of traps and weapons, and an infinite amount of genetically created humanoids called Splatts, that all have the life expectancy of a crash test dummy wearing a red Star Trek shirt to rewrite the book.

Each level tests your knowledge of physics as well as your blood-thirsty nature to figure out new and ingenious ways for these Splatts to die, blow them up, slam them into spikes, burn them to ash and many more. 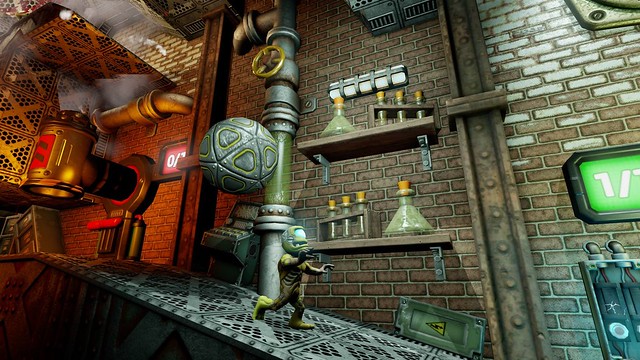 101WtD is played on one screen, at the start of each level you get to set and aim your traps. This is where your ability to plan comes into play. In order to ensure the successful deaths of Splatts you’ll need to make sure that every element of your traps and devices are set up correctly. Your spring boards need to catapult them to just the right place, your buttons need to be activated at the right time, tripwires are triggered right in short, ensure there’s no way for them to escape.

Once you’ve set up the level you push the lever and the Splatts enter the level and mindlessly start walking towards the exit. If you’ve set your traps up well, then you can sit back and enjoy the gory affair of your Splatts getting, well… . splatted. There a few trap elements that require your intervention mid-level, but 101 Ways to Die is not an overly reactive game, you plan, you try, and then tweak and repeat where necessary until you get the result.

Each level has success criteria, some of them are quite basic such as making sure all Splatts die, while others require you to kill them in specific ways. Although, you may still pass the level, if you want to get a three start rating you’ll need to pay close attention to these criteria and plan accordingly. 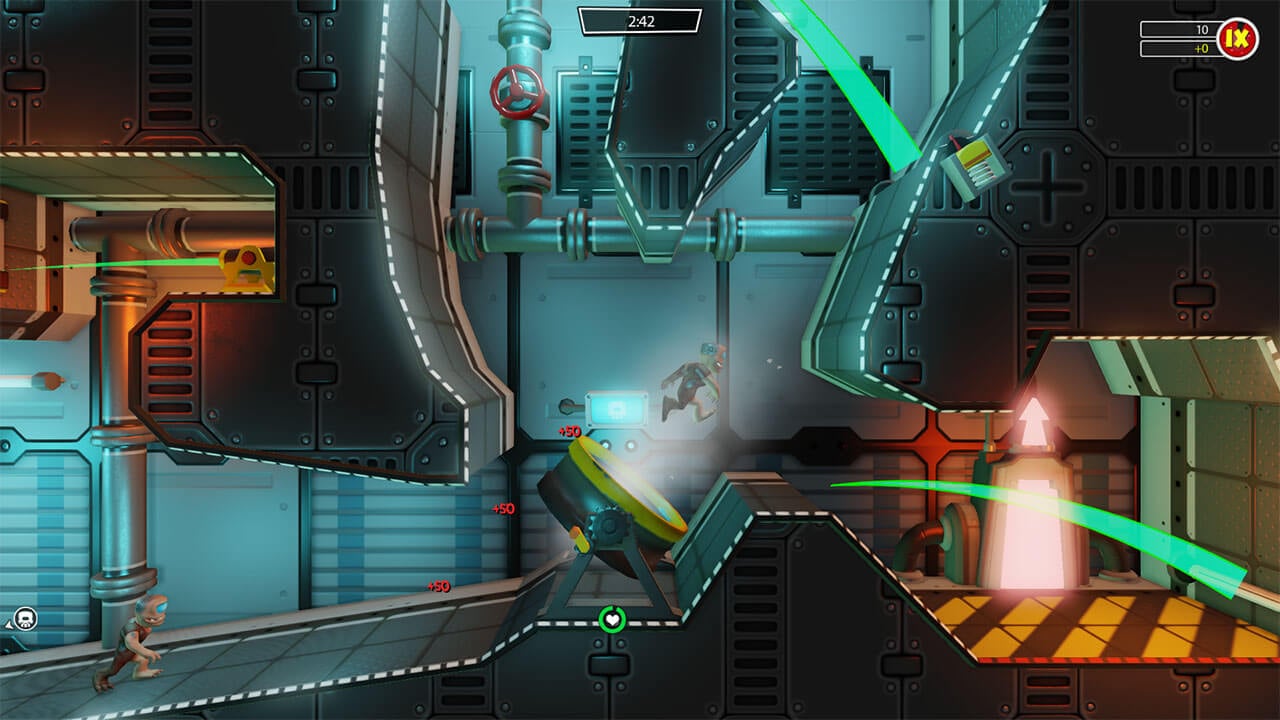 The control system is a basic point and click affair. Use your mouse to select the various traps and weapons from the set-up screen, and then click again once they are in the right place. The piece itself will go green when you can place it there. As mentioned above, apart from the odd piece like cannons which you can fire easily with a left click, most of the controlling is done at set-up. The control system delivers exactly what’s supposed to, so you don’t even really think about it.

Graphically, I like 101 Ways to Die. The graphics are clear, bold and cartoony, and the violence is ridiculously over the top, in the same way that the retro-game Carmageddon was. It’s all over-the-top blood puddles, large spikes, and gruesome deaths. Although, the whole cartoon element of the game stops it from being in any way sick or disturbing. It’s like watching Wile E Coyote get slammed in the face with a lump-hammer or dropped off a cliff.

The difficulty of the game is very dependent on your own need for perfection, if you want to simply get through each level and on to the next one without worrying about a full 3 star rating then 101 Ways to Die is relatively easy, though still very enjoyable. However, if you religiously want top marks for every level, then be prepared for a trickier time. Trying to figure out how to lay your finite number of traps in order to get the final third star can send you to distraction. Still, all those non-completionists can just walk away and get on to the next level of Splatt-murdering playability. The game lets you in easy and then it starts increasing the difficulty gently with the get out option of not going for all three stars to move on.

This is always a tricky one for me, and if 101 Ways to Die was an App for a mobile device, I think It would have far more replayability than it does as a desktop game. Although it’s a brilliant concept and I do love the concept, it’s hard to imagine me spending weeks or months playing this game. I think my need to play this will just peter out, and something else will take its place. If it was a mobile app, it’s something I’d pick up on the way to work, or waiting for a bus it’s a game that would easily fit into those 5-10 slots you get on a mobile app. I really liked 101 Ways to Die. It played to my love of cartoon-violence and physics based puzzle games that probably started from all those Looney Tunes cartoons I used to watch as a child. The story was enough to explain the puzzles, but this game doesn’t need huge amounts of plot, and the level of difficulty was just what I would expect, enough to progress without hitting a frustrating road-block. I loved the variety of traps you have and all the quite-ingenious and manically bloodthirsty ways you can cause the Splatts’ demise

Replayability is where 101WtD takes a hit. Once you’ve achieved 3 stars for a level, there really is no need to go back and do it again. However, it is a huge amount of fun on the first play through and it shouldn’t be judged too harshly on this one element.