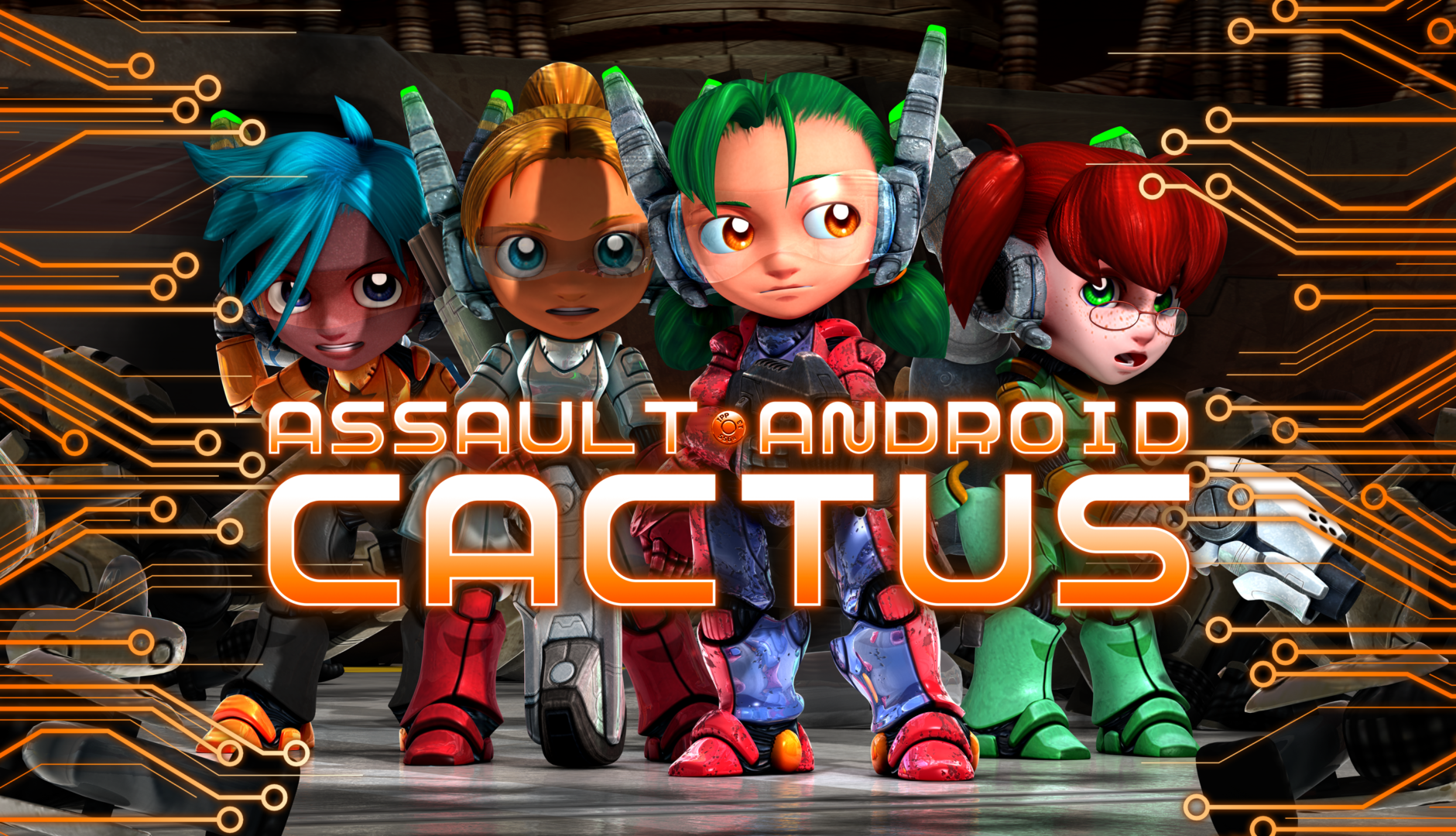 Assault Android Cactus is one of those twin stick shooters that arrives every so often and makes itself an example for the whole genre with its energizing gameplay and fluid mechanics.

Initially, the character selection is limited to four Androids, with more to be unlocked as you make your way through the 25 stages spanned throught 5 unique chapters that fill up the story campaign. As you progress through the game you unlock more and more playable Androids, taking it to total of nine. All nine of them are incredibly diverse in how they work and play. Each character comes with a primary and secondary attack, both unique across all characters.

The only thing all androids have in common is how easy is to control them. Both keyboard/mouse and controller work well, the first combination feeling more natural for me (but then againg, I rarely play anything with controler). Assault Android Cactus supports Xbox 360/One controllers and includes native PlayStation 4 pad support, a good inclusion for people who want to make use of the game’s four people cooperative action – limited to local co-op unfortunatelly.

Primary attack will trully be your main source of engaging combat, as it has no cooldown or any limit of using in rapid succession. Using secondary attacks cannot be abused, as there is a cooldown after usage. The dodge is extremely important to the game’s mechanic if you want to stay alive and keep them high scores comming.

Levels are constructed to keep a constant flow of action and intensity. Good for us that the controls are very responsive, as dodging becomes almost an art in evading constant danger, while using swift reactions to stay away from danger. Stages begin as simple boxed arenas in various shapes, but later other elements are introduced. levels are very diverse overall, some are set in dark, some feature unique turrets, some leves have gravity disorder problems, in some the ground rearranges itself and so on

Lives are non-existent here, meaning death is only a handicap that drops the android to the ground for a few seconds, while removing any power up or primary weapon buff gained from energy orbs dropped from the defeated. Tapping the fire trigger brings the android back on their feet ready to battle on.

Instead, life is represented by a battery bar that drains over the course of play. If it empties, the level is a failure, and the only way to stop this is by collecting batteries caches that drop somewhat randomly after you blast decent amound of those evil robots. Don’t think this makes the game easy, as dying constantly will prevent you from killing enough machines to generate the next battery. The whole battery system is very well thought-out and intuitive idea by any standard.

I only wish there was more to the power-ups you that drop, in the same fashion as batteries, over the course of play. Only three exist, lockdown (sends out a wave that freezes everything in sight), firepower (two assistants drones lend some firepower) and speed increase, highly effective for maneuvering around. Power ups left on the ground switch colours every ten or so seconds, offering a choice for the player to grab the item he desires at that given point of time. Mixed with the battery system, you get the recipe for a very agressive and fast-paced gameplay. 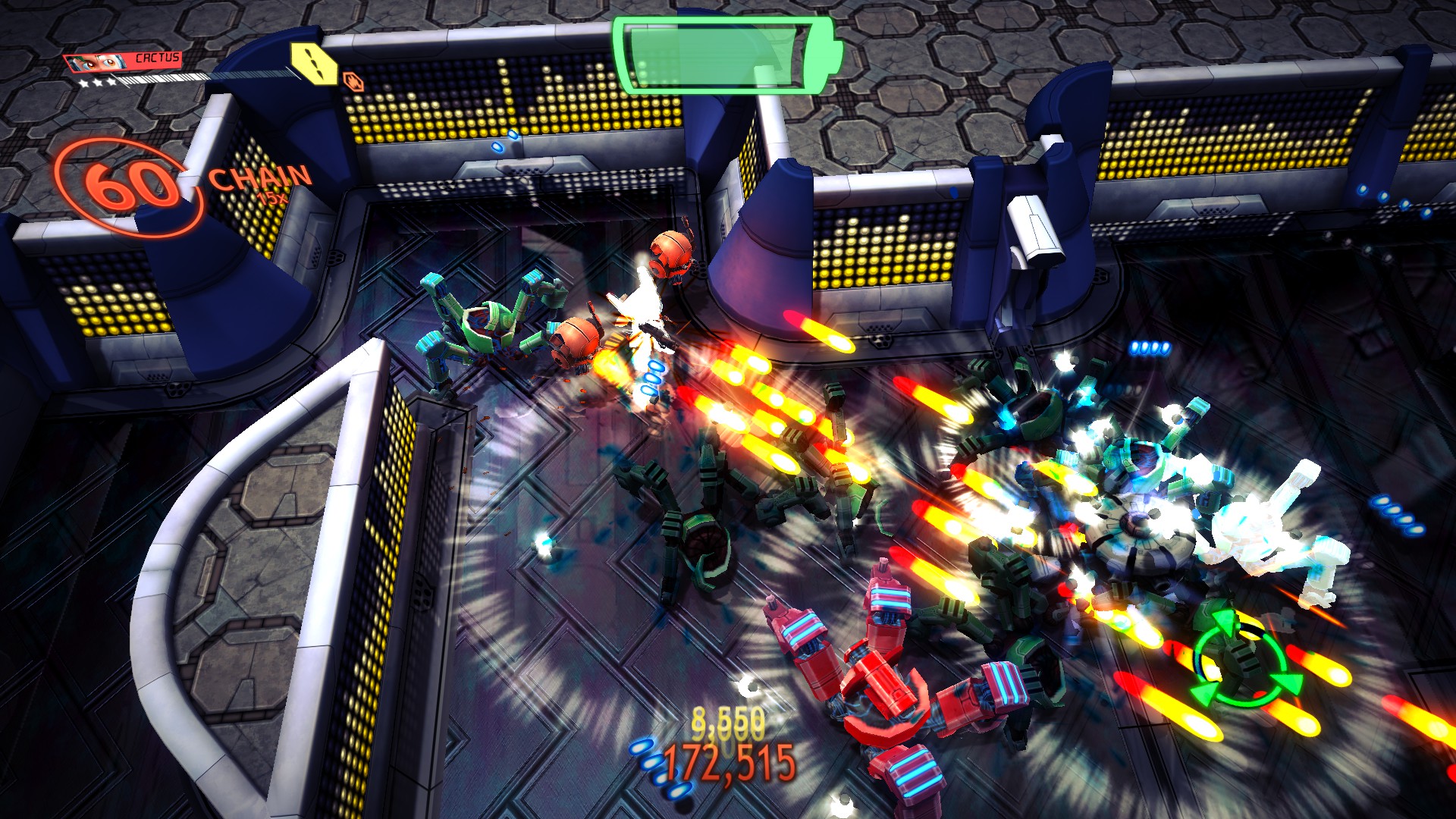 Anyway, Assault Android Cactus requires the player to be alert most of the time. That said, I still think that that the game as a whole is a stress-free and fairly easy experience (campaing wise that is, as there are some extra and bonus modes that will really test your skills and reactions). Getting a S+ rank in any stage is another story. Requirements are quite brutal, as you must not let your combo streak end, you must not get hit more than a few times and your battery must not deplete. Good luck with that.

Overall, Assault Android Cactus is a slick game that feels so good to play with its satisfying controls, fluid game mechanics, some really terrific levels and diverse combat styles. It manages to bring you that retro feeling like you (well I) had playing twin- stick shooter in the mid 90’s.