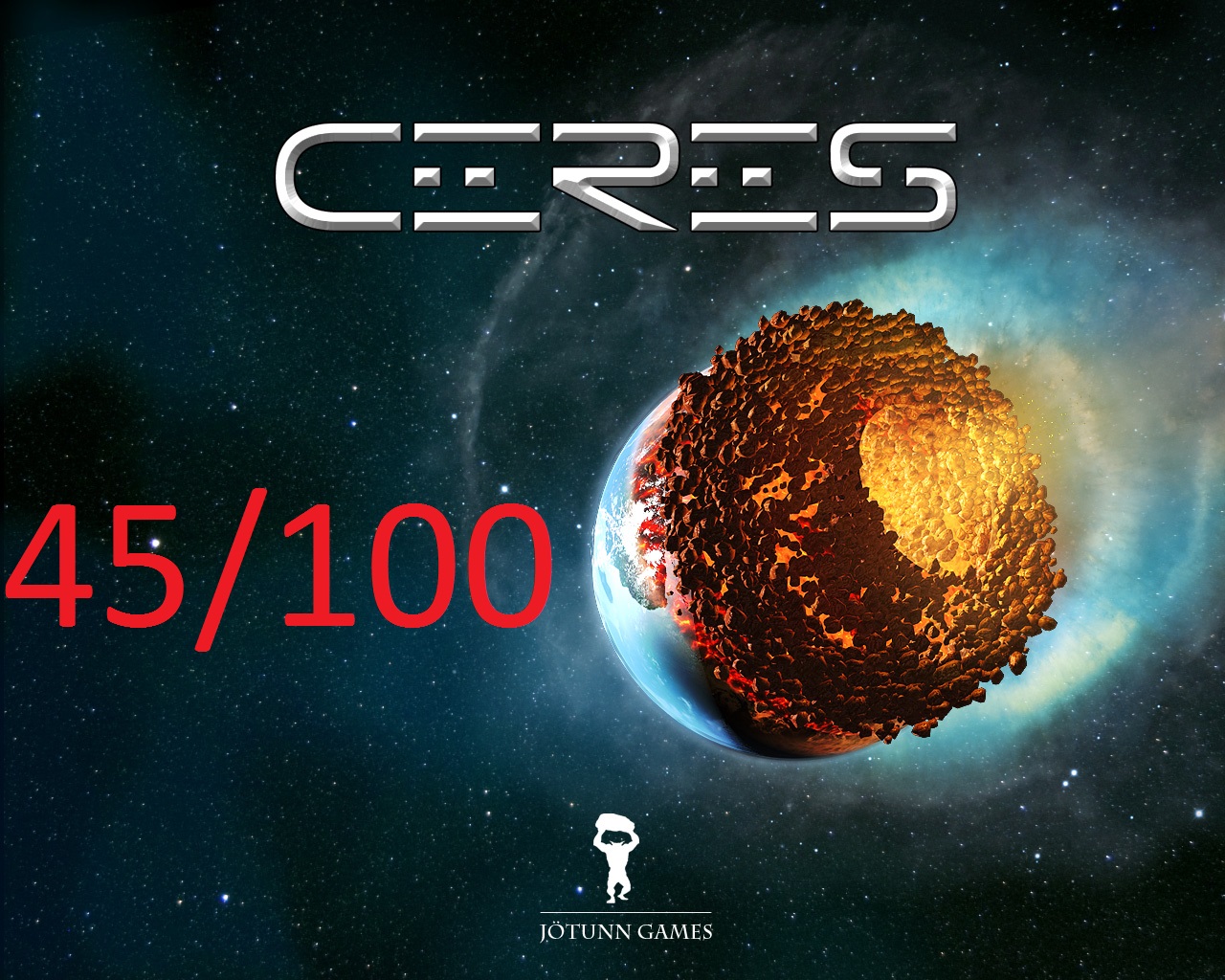 Take your ship and go on exploration of the galaxy as the Earth is destroyed and now you must scatter throughout the galaxy. To make it clear, this game certainly isn’t for everybody. It’s a slow-paced game where tactical means hardcore or very tactical. Those that are used on the fast-paced game will have hard times, especially when you need to think about your next moves and in this game you need to be at least one step ahead of your enemy or enemies. 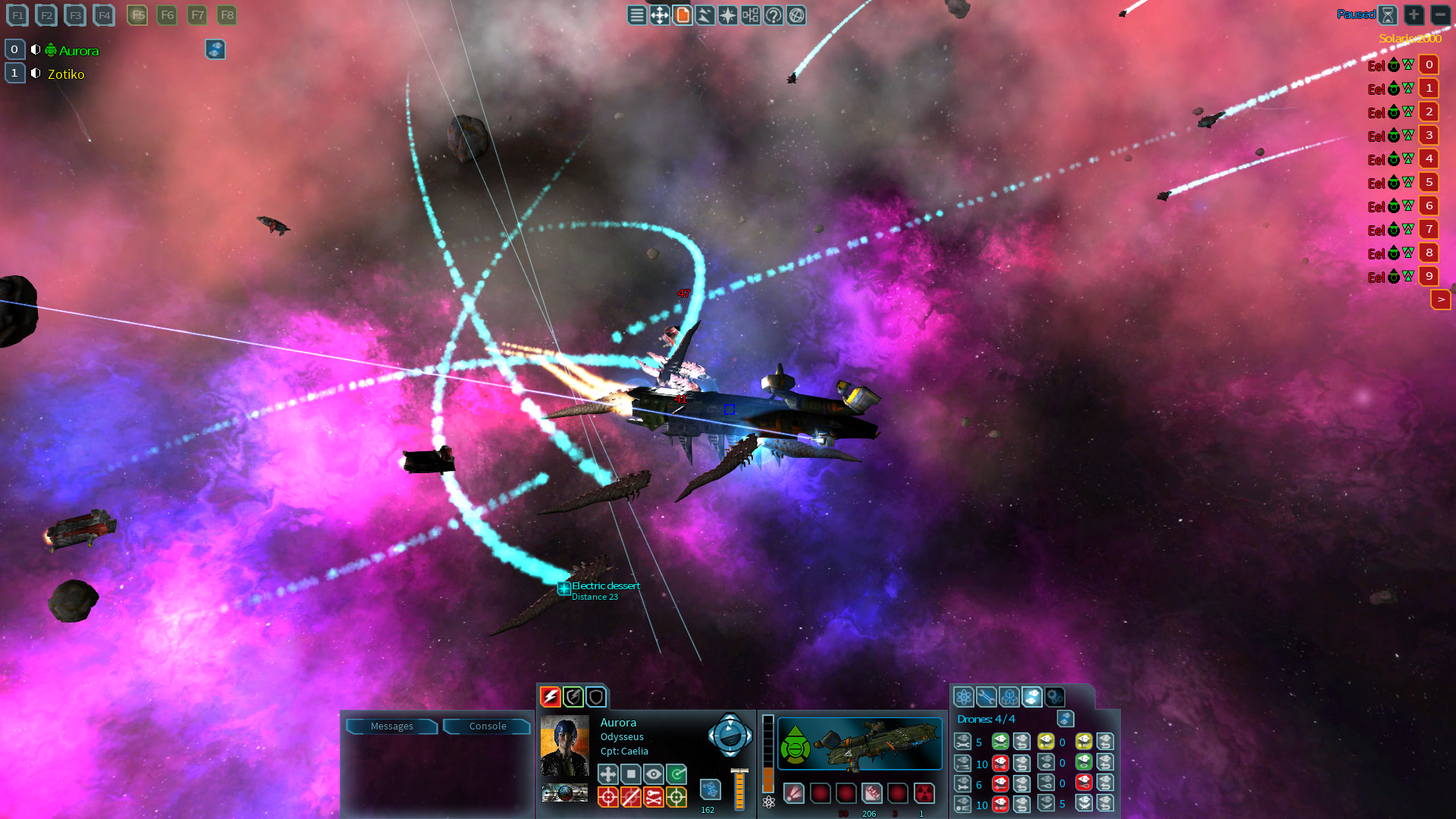 I would call Ceres the most clumsiest game I have ever tried. Clumsy doesn’t mean bad, but it doesn’t mean good also. There are few things that affects the gameplay and player’s mood as he plays the game. Graphically speaking, game is stuck in the first decade of 21st Century. Game looks like it’s from 2003 or 2005. Ships doesn’t look so detail and they are poorly designed, at least they look like that. Special effects are anything but special. Graphics aren’t the biggest problem, but it’s something that has to be noted as we are in 2015 year. One more thing about the graphics is that game isn’t optimized so well and people with weaker computers might have problems.

Probably the main problem of Ceres is moving your ship through the space. Generally speaking, navigating in this game is very clumsy and can be frustrating. I can only assume that navigating and moving through the space is difficulty, especially to simulate the same. To move your ship or fleet, you press M key and the grid system shows. First of all you need to get the right angle of camera to set the course of your ship right. If you don’t go through the movement tutorial, you will have hard times. When I was playing this game for the first time, I didn’t know that I can move the grid system up and down, while you hold the SHIFT key. There are so many little things that kill the fun of Ceres. I wasn’t hyped about this game, but when I saw images and videos I said to myself that I need to try this game it looks like a promising space game. I don’t like playing tactical games so much, but I just gave this game a chance. Since the focus in this game is on tactics, problem with navigating and interacting gets bigger meaning. One more thing that disappointed me is the combat, I expected more from combat. I thought it is going to be better than it is. It’s very slow, but very slow and if you don’t speed up the game, you will fall asleep. It was very boring by default. 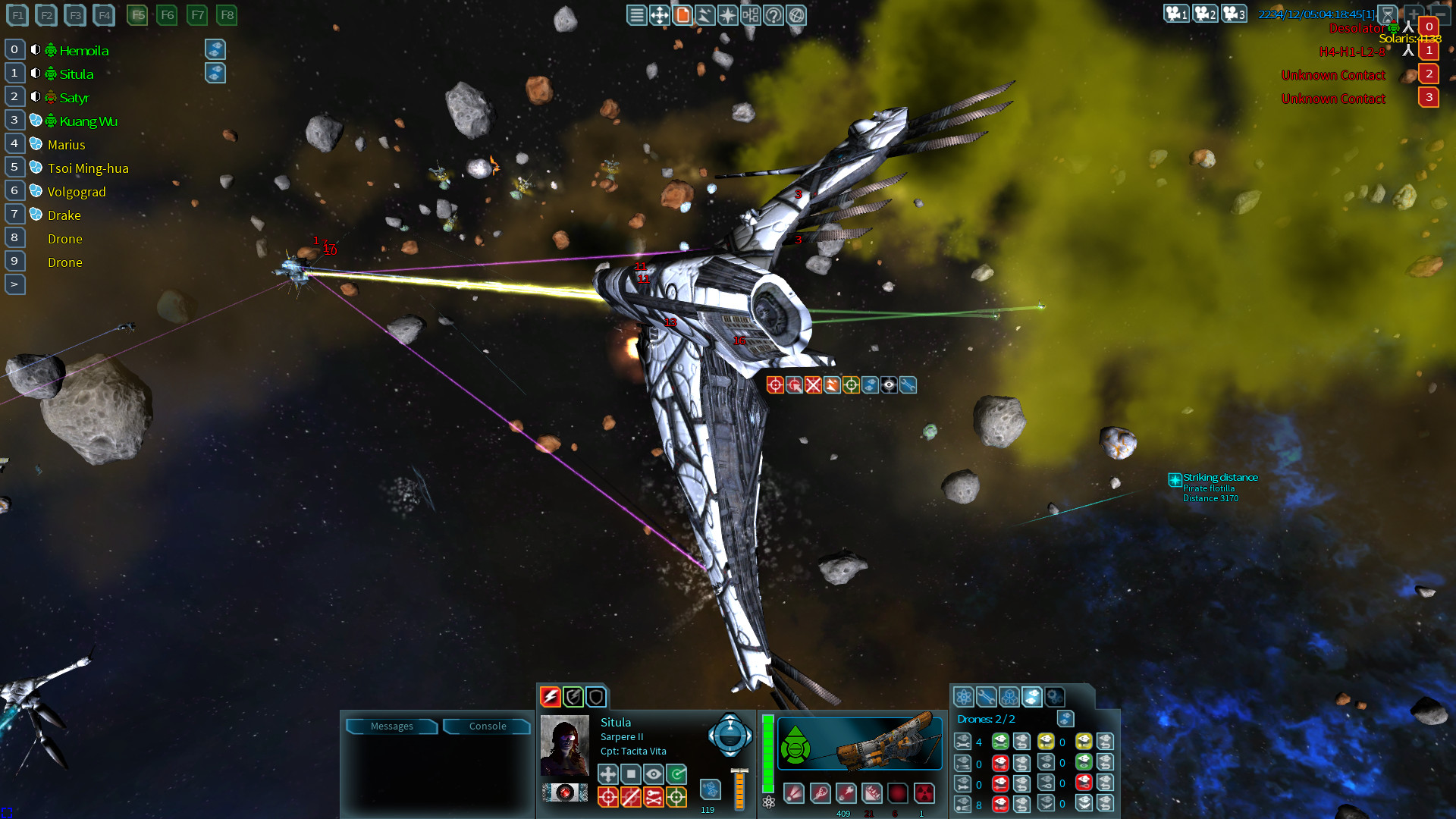 I was having a lot of problems as a newbie in this genre. First of all I didn’t know what are the controls or how to use them. I had problems with navigating and moving my ship through the space. Then I had the problem with understanding what button does what or how to recall the droid. God thanks that there are tutorials that explains everything, well most of the things. In the tutorial some captain is leading you through and dialogs are written in very small window in lower left corner. While you are playing that can be distracting if you don’t have the pause options on. You can be reading the text of the dialog or someone saying something from the nearby ship and at the same time you can be attacked by the enemy. They should have implemented some other way of interacting and showing the dialog and texts. 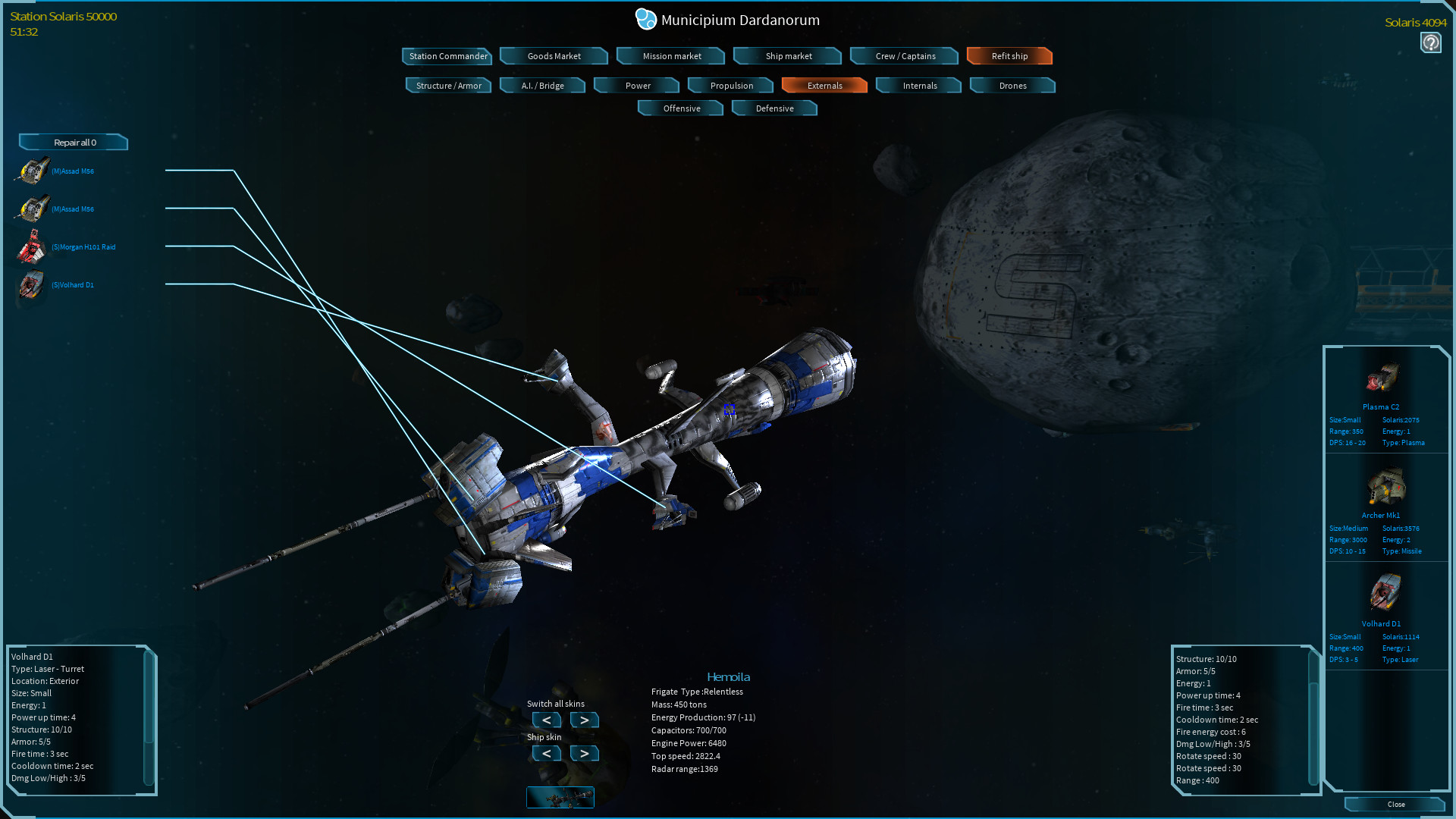 Now let’s talk about the “good” things in this game. What I liked the most is the upgrading of your character (the captain), modification of the ship. Your captain gets points for destroying the ships, well most of the time and for finishing the quests. I forgot to mention that you create your character before starting the game. You can choose between three characters: Bounty hunger, Stellar navigator and Cyber-mechanic, each having different attributes, different ship and different starting perk. As you collect experience and level up you get 10 points, but I think you get 20 points for the first level up. You can spend those points on 11 different stats. That gives you the freedom to create your own personality and play style. When you level up you can level up one perk and there are almost the same number of perks as attributes if not maybe more than attributes. 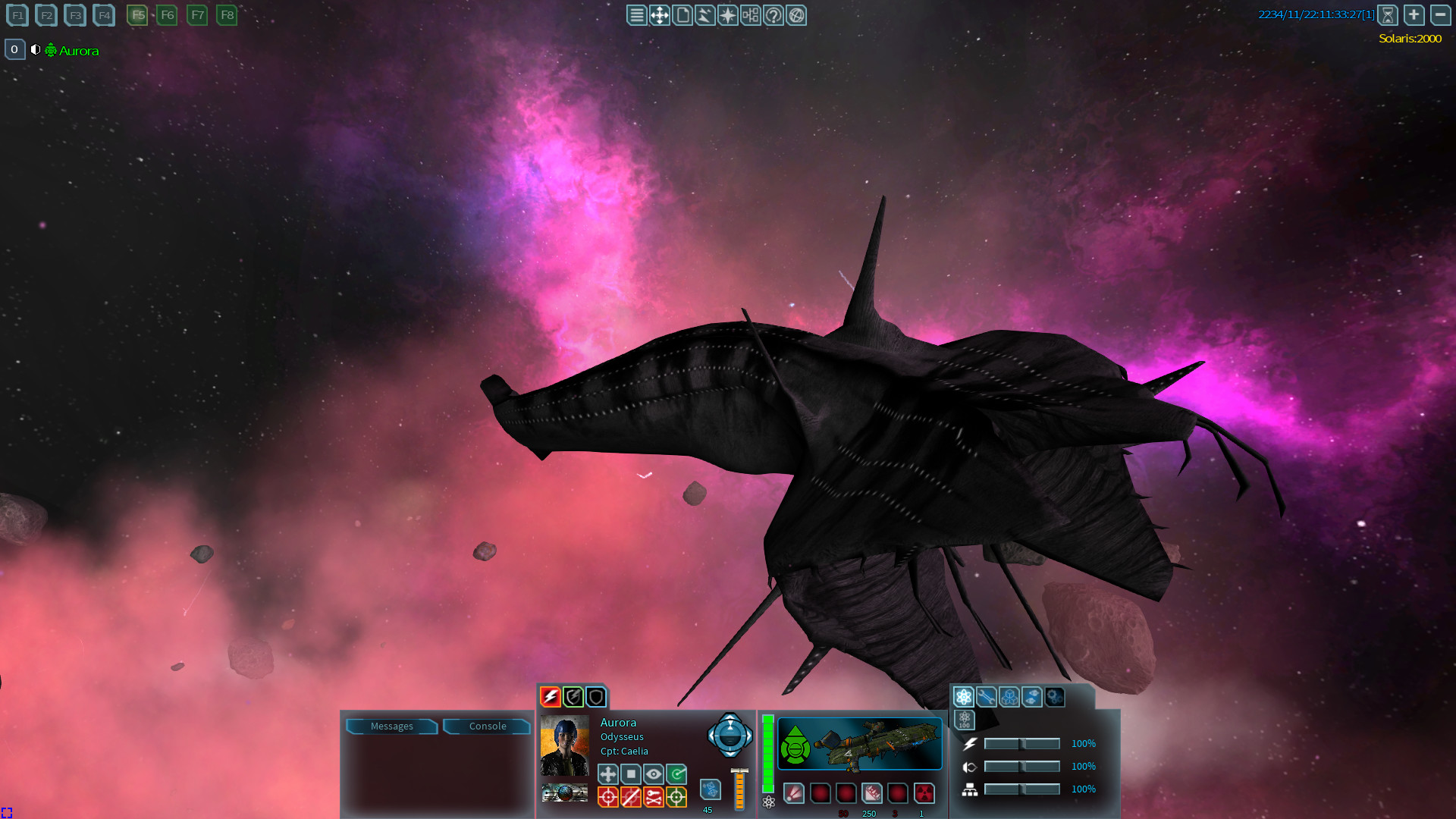 Throughout the game you will find numerous stations, in which you can repair your ship instantly, buy new parts of the ship and many more things. This is maybe the best thing in the game or the best aspect of the game. Stations are heart of the game, because without visiting them, you will not be able to advance and the problem again is that game is not indicating you, when you should visit station to improve your ship or you fleet. There are three types of market that you access. Goods, Mission and Ship. Goods market is good when you have salvaged a lot of minerals and other goods from destroyed ships. You can sell your goods and then buy goods you need. Mission market offers you missions, I assume they are just side missions. When you collect enough solaris, you can buy yourself a new ship or add another ship to your fleet. Even though it’s not labeled as a market, there is a crew “market”. There you can hire new members of your crew, you can also train them and you can hire new captains. The station also gives you possibility to refit your ship. To be more clearer. Once you have bought few new parts, you can put them in your ship or should I say, you can replace the old parts with new one, but don’t worry. The old parts will still stay in the station and you can use them on some older ship. As I said these stations are the spotlight of the whole game and probably the best thing in the game. Visit them often! 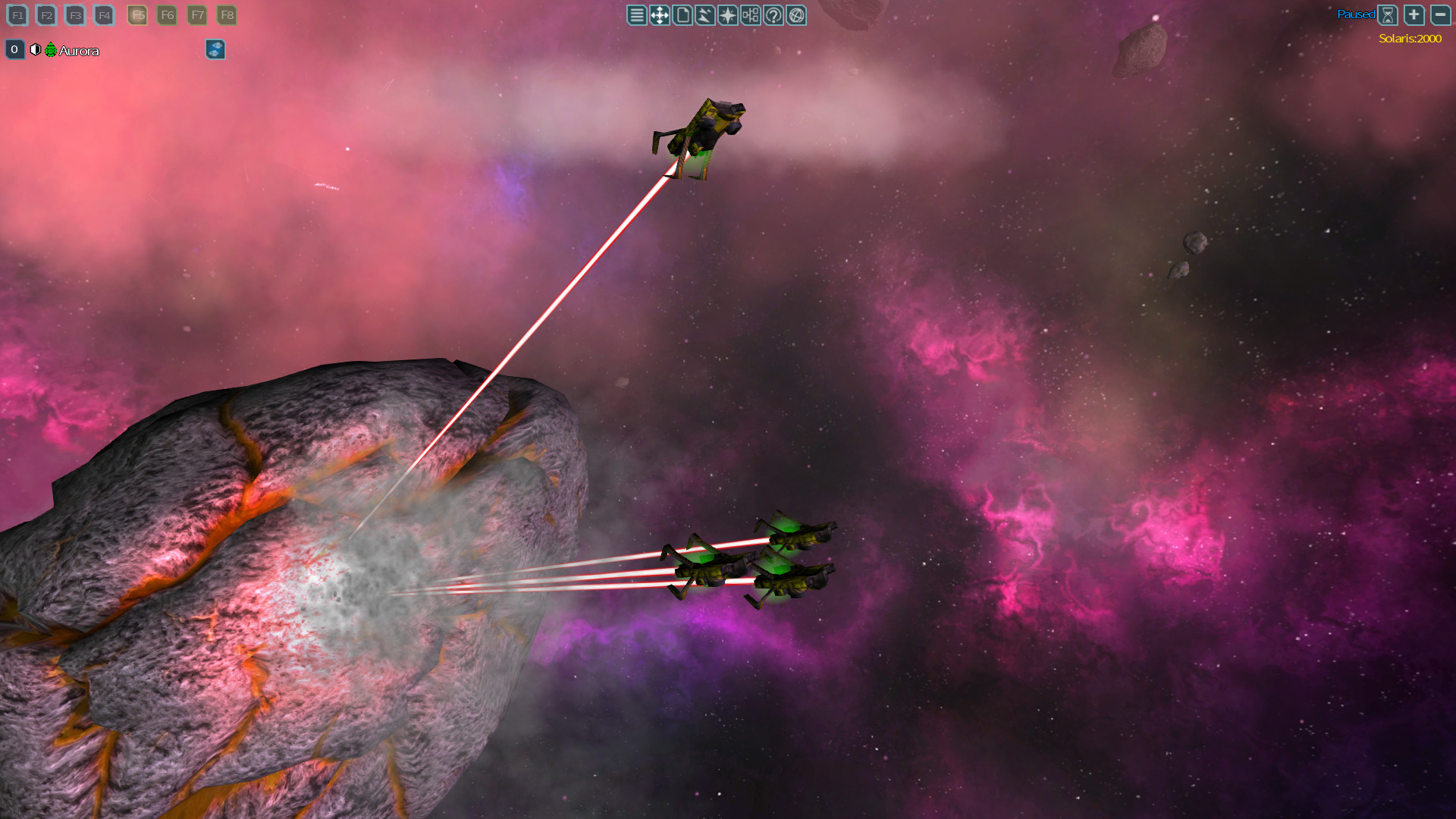 Ceres is clumsy and bad game, well more clumsy than bad. The biggest problem is the navigating and moving through the space. The grid system is bad, camera too and game’s graphics looks so old and ugly, I mean, common. It’s 2015 year (was, when I wrote this review). The only good things in this game are upgrading of your character and upgrading of your ship. I think that even hardcore fans of this kind games are going to have problems and probably not to be so happy about the game. I am sorry Jottun Games, but if you are going to make a sequel or completely new space tactical game, please learn from your mistakes that you made with this game.  Make it easier, more beautiful and everyone should be happy then. This game is little below the average and for hardcore fans it’s probably average game or how we all say: Just another game.